When it comes to fluke fishing, there’s certainly no shortage of opinions regarding tackle, tactics and techniques to employ throughout the season. One common vein that’s present in the game plans of most flukesters, is deploying natural baits.

Countless baits are available to the fluke angler, though each type of bait revolves around time, tide and prevalence to determine what to drop down and when. Here’s a quick rundown of how to choose your natural baits for fluke and how to rig them.

It’s the bait that probably everybody in the angling world (BG – Before Gulp) began with on their very first fluke trip. Squid strips are the most common fluke baits, cut half-inch thick, about 4 inches long and tapered to a V. To amp up the attraction, douse your baits in FinEssence oil (squid, shedder oil, etc.) on naked strips or use pre-cut Fisherman’s Choice squid strips. Squid strips are mainly used on a three-way swivel rig, adorned with a squid skirt or bucktail and mylar flash and are usually combined with a spearing or sand eel. Don’t ball up the strip, but hook it once through the tip, allowing the rest of the strip body to flutter unhindered. 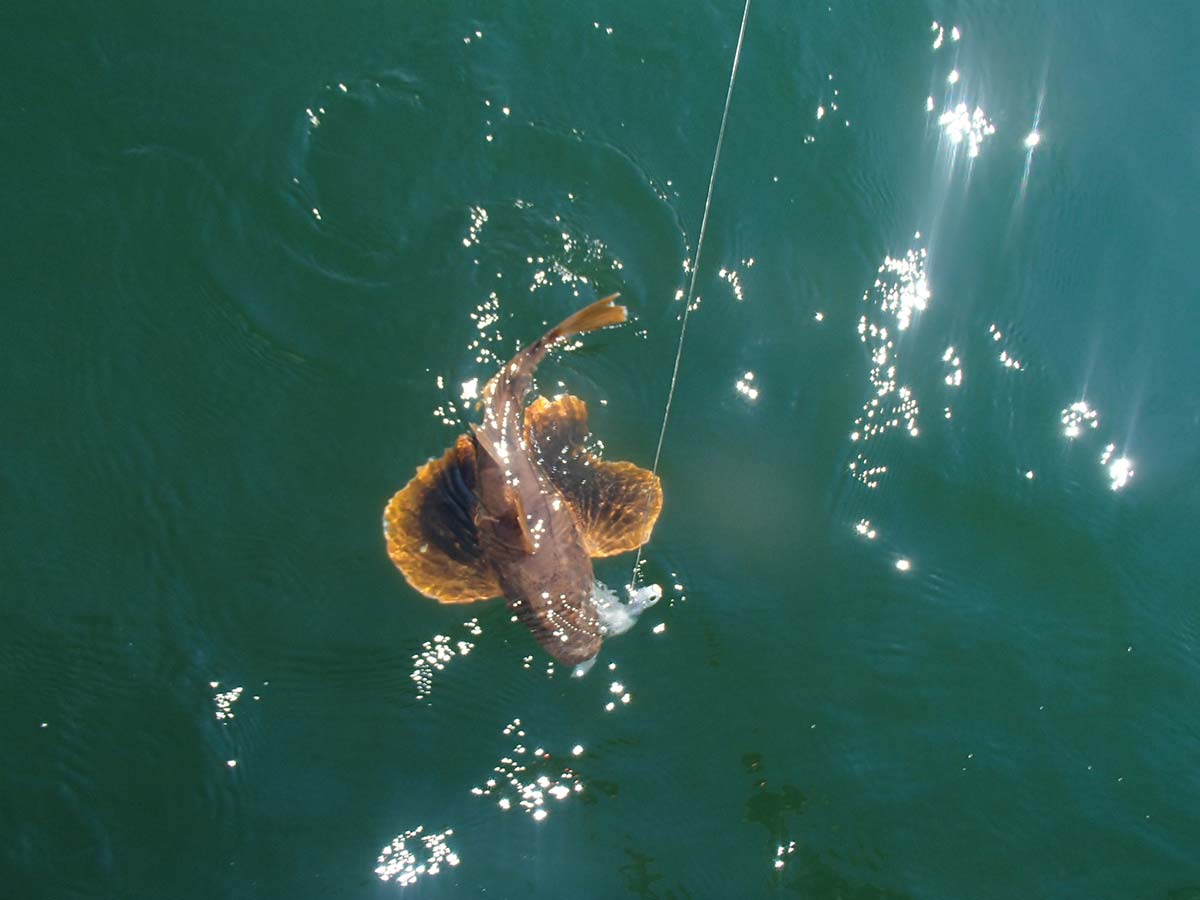 Another common bait used during the summer season, especially when bay fishing, spearing or Atlantic silversides are a main forage species both in the bay systems and close to shore. Seine net your own spearing in the bay systems or simply buy frozen packs in the tackle shop. Usually drifted on three-way swivel rigs and a size 2/0 Octopus hook, thread the hook through both eyes once so they lay flat on the hook and do not blow out their guts when drifting. Tip the spearing with a squid strip and you have the quintessential party boat fluke bait.

These bad boys are sometimes harder to find in tackle shops. Large and long, Peruvian spearing – or smelt – run roughly 5 to 8 inches in length and are used when targeting big fluke. Most often, they are fished on a fishfinder slide rig, with an egg sinker threaded onto the main line, followed by a 100-pound barrel swivel, 24-inch section of 30-pound Seaguar fluorocarbon leader and a tandem sliding 4-inch paired snelled size 3/0 Gamkatsu Octopus hooks. The Peruvian spearing is hooked with the upper hook through both eyes and the trailing hook leader pulled taut then pierced just below the backbone.

Doormat hunters up the ante by using whole squids as bait, usually procuring large logilo or ilex squid sold whole in shops, either in vacuumed packs or in small white boxes. Whole squid can reach 18 inches in length, though most whole squid used for bait are in the 6- to 12-inch range. The two sliding hooks of a tandem rig are usually worked into the squid, with the first hook pierced at the tip of the triangle of the mantle, then the second hook at the end of the mantle where it separates from the head, but not hooked in the head or tentacles. When a fluke grabs the huge bait, feed it back in free spool to ensure the entire bait is inhaled for a hookset.

Snapper bluefish were always the mid- and late-summer treat for fluke, but current regulations have quelled their use. Remember that you’ll need to adhere to the new three-fish private limit on bluefish, five on a for-hire boat, no matter the size of the fish, even with snappers. It may not make sense to sabiki rig up five snappers in a livewell for the trip, but if you do, they are lights out deepwater big fluke baits. If the drift is fast, use an egg sinker slide rig and hook the snapper through the eyes, the bridge of the nose or through the bottom and upper lips. If the drift is stagnant, then you can drop down and hook the snapper just behind the dorsal fin.

Live spot or lafayettes are probably an even more accessible bet than snapper bluefish, as they can be purchased at select tackle shops throughout the region, or caught primarily in the South Jersey, Delaware region and kept in a livewell on your.  The same methodology applies, drifting the fish on an egg sinker sliding rig with 24- to 30-inch 30-pound fluorocarbon leader and a size 3/0 to 4/0 Octopus hook. Either pierce the hook through the nostrils or lips if drifting. If the spot eventually ends up dying, don’t throw it away, but strip up the carcass and use the strips like you would squid strips.

Which leads me into all the other strip baits you can use for fluke; in the spring, it’s fairly easy to catch bluefish and sometimes mackerel, and savvy anglers target both species, take them home, then cut strips out of them, salting them down and freezing if necessary for the season opener. Sea robins and bergalls are common bycatch in summer when fluking and make the finest fresh baits. Generally, strip up any of the species into 4- to 5-inch long and half inch wide, cut streamlined so they undulate without any hindrance. The best way to fish them is on 1- to 3-ounce bucktails. Use bucktails with lighter gauge wire, not the thick wire designed to pierce the heavy solid maw of striped bass but thinner wire bucks such as Andrus or Spro that allow for a clean pierce and easier swallow for a fluke. When using bait strips on bucktails for fluke, the best time to use is when the drift is super slow and you can cast around to explore the area and create your own “drift”, bouncing the bucktail back to you.

When sand eels are thick, fluke are dialed into the thin profile on presentations. Fresh sand eels are sick baits when drifted on three-way rigs as well as when used to tip a bucktail. A fantastic combo is to take a squid strip or a spearing, then top it off with a sand eel hooked once through the eyes. Fluke tend to bite a sand eel bait, then either hang on it or finish it off so you may need to feed the bait back so the flatfish sucks in the entire presentation up to the hook.

Hands down, one of the best, (if not the best) fluke baits available. Summer flounder are cannibalistic and nothing gets them sparked to bite like the long thin ribbons of the underside of fluke white belly, or the brown ribbons from the finlets on the sides. Fluke bellies and side ribbons can be fished as one strip, hooked on a tandem slide two hook rig with the first hook implanted on the tip of the strip, then the next hook punctured with the tandem leader again taut mid-strip. A nice trick is to take the white fluke belly and hook it on first, then take the brown ribbon part and hook it brown side up on top of the white belly. This appears like a small fluke and doormat fish over 10 pounds always fall for a quick cannibalistic meal.  Just make sure you adhere to local regulations; in most states, you’re allowed to strip up one legal fluke so long as you retain the carcass which applies to your daily bag.

Salmon, for fluke? This one little trick I learned from The Fisherman‘s John DeBona nearly 20 years ago.  D-Bones would befriend the fishmonger at his local Shop Rite and get all the bellies from the filleted salmon at the store. The orange/silvery baits were lights out on big fluke rigged on the fishfinder slide with a double tandem hook rig. The slender belly is fished just like a fluke belly as it’s a meaty strip that has plenty of fresh scent to attract fish to bite.  Also an outstanding candidate for dousing with FinEssence.

If you happen to roll through all your natural baits and are stuck baitless on a boat, you can always catch any legal fish to strip up and put on the hook. Nothing attracts fluke like the fresh stuff. Go natural, and if you have to “cheat”, bring the Gulp and Fishbites!