“That first recapture fueled us to tag even more sharks.”

The South Fork Natural History Museum’s (SOFO) Shark Research and Education Program all started with four friends that graduated with degrees in marine science from Southampton College in the mid 90’s who continued to work in their field of study. Greg Metzger is a marine science teacher at Southampton High School on Long Island. Dr. Tobey Curtis is a fisheries management specialist with NOAA. Frank Quevedo is the executive director of SOFO. And I am the owner of Fish Guy Photos and work for Stony Brook University. In addition to our similar professions, we each have a deep passion for fishing. Like many anglers, we enjoy pursuing the ocean’s top predator, sharks.

Due to our marine science background, we understood that most shark species cannot handle heavy fishing pressure due to their longevity, so the sharks we caught were released to fight another day. We also recognized that each shark we caught would be an extremely valuable data point to a researcher studying sharks. So instead of simply releasing our catch, we started to send them off with NOAA Apex Predator Tags. These tags are available to all anglers that fish for sharks. It is a citizen science program where anglers can contribute to shark science by tagging the sharks that they are releasing.

Upon catching a shark, data such as species, location, and size is recorded, the shark is tagged, and then released. Each tag has an ID number that matches the ID number on the data card. If the shark is ever caught again, the tag comes with instructions for reporting the recapture. Our first recapture was a small mako that we caught/tagged outside of Shinnecock Inlet that was caught again one year and seven months later off the coast of Africa! That first recapture fueled us to tag even more sharks.

Our efforts paid off when Molly Lutcavage from the Large Pelagics Research Center gave us a $2,000 pop-up satellite archival tag (PSAT) to deploy during our 2015 season. These tags are used to track the large-scale movements and behavior of marine animals. Data such as depth, temperature, and light-level are recorded every two minutes and after a set amount of time (roughly one month) the tag breaks free from the shark. The data is then transmitted to a satellite, which then emails the data to the researcher.

Being that we were only four friends, with no fiscal support from our day jobs or other benefactors, this was an extremely exciting opportunity. 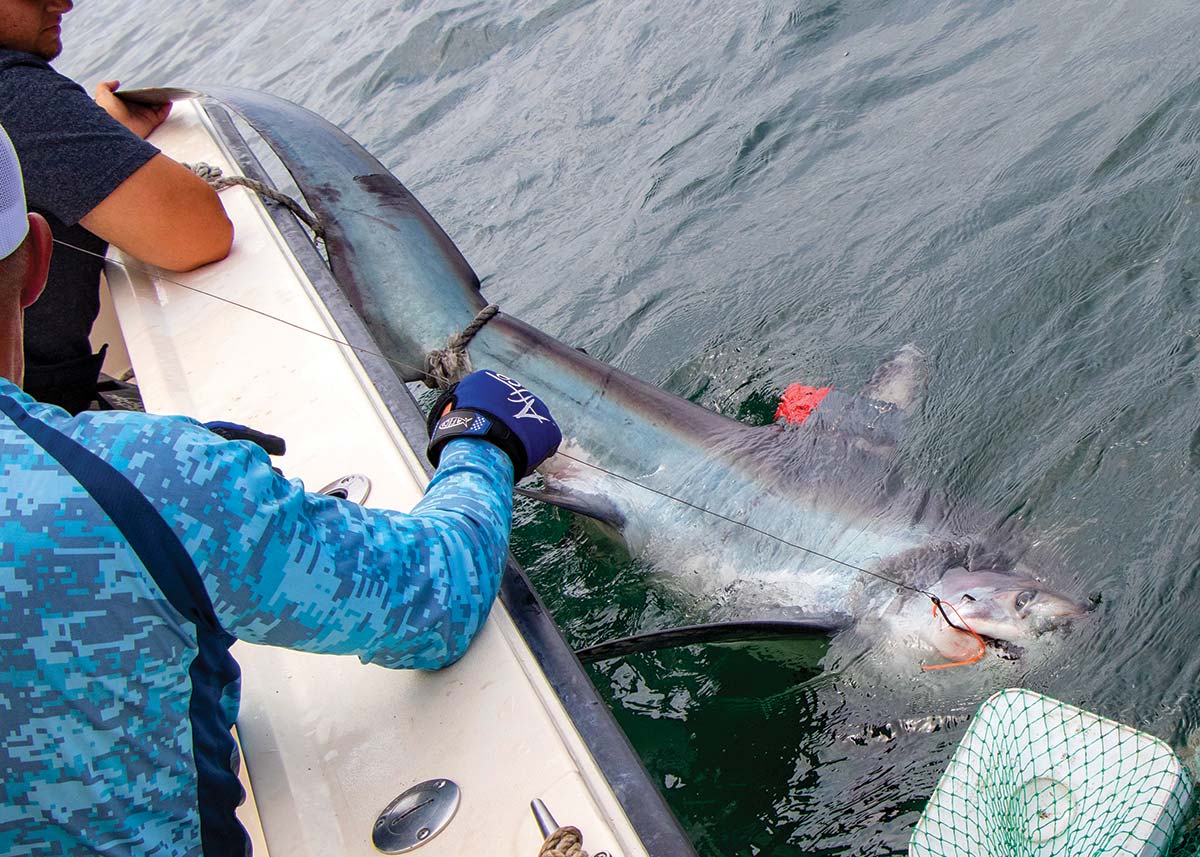 We wasted no time putting that tag to good use when Greg and crew caught and put the PSAT on a young of the year (YOY) white shark. Little did he know at the time, but that was the first YOY white shark to be tagged with a PSAT in the Atlantic. News of this exciting tag deployment spread throughout the shark research world and we received a call from Chris Fischer. Chris is the founder of OCEARCH, a group best known for their work tagging adult great white sharks. He wanted to help us catch an additional 20 juvenile white sharks to confirm what other researchers have suspected for years, which is the New York Bight is a nursery for juvenile white sharks. Over two expeditions, we did just that. We caught, tagged, and released 20 juvenile white sharks and this ground-breaking research was later published in Nature (Curtis, et. al. 2018). To date, we have tagged over 30 YOY white sharks.

After the OCEARCH expeditions, we outgrew being ‘just four friends who enjoy fishing to further shark research’. We needed a way to secure more funding, especially to purchase additional satellite tags. Hence, the SOFO Shark Research and Education Program was established. As a nonprofit 501(C) organization, SOFO was able to secure tax-deductible donations to create an amazing interactive shark research display at their museum in Bridgehampton, NY. Additional donations allowed us to purchase tags and other necessary equipment. Some of the first donations came from the Southampton Education Fund and Bridgehampton High School and were used to purchase two CATS Cams. In addition to recording temperature, light, and depth, these $10K plus tags also record speed, acceleration, contain a magnetometer for compass bearings, and are equipped with an HD video camera. We also brought on two additional captains, Walter Zublionis and Matt Berkhout, to assist in deploying all the new tags we had just acquired.

As previously mentioned, PSATs will transmit the data that they collect to a satellite that then emails us the results. This works great if the files you are sending contain only numbers, but if you have ever tried to email a video, you know that it is just about impossible. For this reason, we must retrieve the CATS Cam soon after it releases from the shark, which adds several levels of complexity to use this technology.

First, we set these tags to pop within 12 to 24 hours to increase the odd of finding the tag. Second, we need a long enough weather window to be able to head back out once the tag pops. Third, we do not want to put it on a species, such as a mako, that could cover a lot of ground in a short period of time. And lastly, we want to tag species that stay relatively close to shore, i.e. white and thresher sharks.

While we have yet to tag a white shark with a CATS Cam, mainly due to weather windows, we have successfully deployed CATS Cams on two thresher sharks (a first in the world). Each tag yielded amazing data, but unfortunately the video yielded nothing more than the head of the shark moving back and forth as it swam along. We were hoping to witness interactions with other animals or feeding activity, but no such luck.

In recent years, schools of spinner sharks have been feasting on bunker schools along the South Shore of Long Island. This is a species that is much more common to our south, but with warming sea temperatures, they have started to expand their range northward. Due to their abundance and being that they are new to the area, we decided to tag a couple of them last summer and we were super excited about the results. We are still compiling the data recorded by the tags, but the video captured by the CATS Cam was truly amazing. After an hour or so of watching the shark’s head go back and forth, each spinner shark we tagged met up with large schools of other spinner sharks. We did not capture any feeding activity but seeing them swim among one another was truly awesome.

The NY Bight is home to one of the busiest metropolises in the world and swimming in its waters are some of the ocean’s top predators. As tag technology continues to advance with smaller sizes, longer battery life, and new instrumentation, the SOFO Shark Research and Education Program will be able to answer questions that would not have been possible a mere 20 years ago. How do sharks use the NY Bight? How important is this region to sharks? What can be done to ensure this resource is here for future generations to enjoy?

These questions, and more, are what SOFO is hoping to answer.