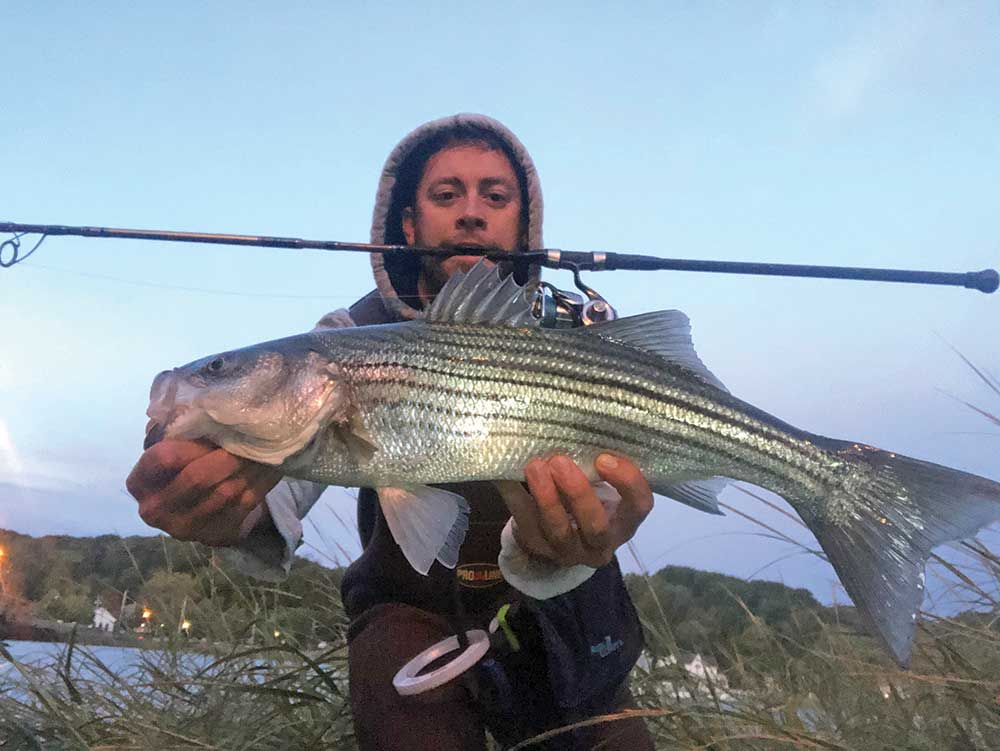 Tradition says to kick off the surf fishing season in the Western Sound. Here’s why.

Certainly, that tradition dominated my 2019 season even though North Shore action was restricted by a lack of bait. However, what the North Shore lacked the South Shore owned in spades and generated a very good fall run. I know, you want to understand why one shore can have scattered patches of bait while the other shore produced an abundance? Sorry, I have no certain answers. However, bait abundance disparity or not, the tradition lives on even if the number of available fish is limited. In spite of bait scarcity, a North Shore angler was able to eke out a handful of stripers on many occasions, while the south shore fall striper run was great even if larger fish were scarce. Sadly, what’s recently become a fall tradition: multiple four-day nor’easters, flattened the beaches and ended the season earlier than normal. Every December recently, I find myself hoping that next April will be punctuated with more normal weather instead of the winds and chill of recent springs and a more normal one-day nor’easter pattern for the fall. Oh, if only wishing could mold reality!

The traditional opening of the surf season begins in the extreme western Sound in late March or early April when sand eels move shoreward in response to warming shallows from a higher sun heating harbor mud. The productivity of Little Neck, Manhasset, and even parts of Hempstead harbors depends upon how large and abundant the sand eel schools are as they move from the deep parts of the Sound into the warming bays. In turn, the abundance of sand eels is related to the late winter weather and the environmental conditions in spring. So, each late winter period is spent wondering about the abundance of bait and the size of the Hudson River stock of stripers. The April western Sound run is all Hudson fish.

The key to good early fishing isn’t the absolute temperature of the harbor water, rather whether it is warmer than the Sound. Even a few degrees will jump-start the sand eel migration and stripers will follow. Fortunately, stripers have a wide temperature tolerance unlike blues and weakfish. Both stripers and sand eels are cold-adapted and therefore they winter in the deeper parts of the Sound. Once the inshore movement begins, anglers begin catching fish. Sure, there are good days and bad days, but these fluctuations in success are typically more related to weather changes than anything else. Even a “hot” run will turn off with one strong cold front, but rebound with even one calm mild day.

Although a sudden drop in temperature will cool the bite, so too will any kind of strong north wind because it roils the water at low tide as wave bottoms touch the mud in many places, lifting it and spreading the mud around. The water turns gritty and coffee colored. The stripers may not have a problem with the suspended silt, but sand eels need clean water and will retreat to the either the mouth of the harbor or the deeper water in the Sound. It typically takes a day of calm for the silt to settle out and the food chain to reestablish. By the way, although north winds are the key culprit in shutting down the fishing, the west shores of these harbors are susceptible to strong east winds.  Waves roll across the harbors, bang against the shore, and muddy the water. Strong south winds don’t affect the extreme backs of the bays, but may degrade water quality at the mouths of the harbors.

Like it or not, an angler has quite a few factors to consider when planning a trip to one of these shallow harbors in April. The first is access since the area is highly developed, but the good news is there are public access places in all three harbors. Hempstead Harbor provides surf access on both shores: Tappan Beach on the east shore and Bar Beach (town-south) and a Nassau County Park (north). Manhasset Bay is the toughest to access, but town residents have a few spots to ply. Little Neck provides access along the entire length of the west shoreline via Chrocheron Park. Leave your car in the parking lot, walk over the Cross-Island Parkway via the footbridge, and down onto the shoreline. Almost all of that shore is available to a wader during the lower stages of the tide.

My second concern is the weather. As noted, strong winds reduce water quality and I’ll stay home. Over the decades, I have tried to defeat this wind direction with a plethora of techniques, only to fail. So, now I just don’t go! A third concern is timing. I have found that the most reliable conditions are as follows. Calm, bright sun, and incoming tide during mid to late afternoon. A late high tide and bright sun means the mud has warmed.  As the tide rises, sand eels move into water over the flats where the small food they eat is more active due to the warmth. Of course, the stripers follow. During the second half of April the tide becomes less important because all the water in the area has warmed including the Sound.

My final concern is the pattern of bait and stripers, but I won’t know about that in the beginning. However, I will understand the pattern better during each trip so that within a week I’ll have an understanding of bait type, abundance, and how many schools of stripers are in theses harbors. This information will help mold my strategy concerning when, where, and how to fish. If there are lots of sand eels the fishing for school fish will be good to excellent. Many anglers stick with this pattern because they prefer more action on light tackle. However, if there are lots of bunker schools in the harbors the big bait will attract larger fish and for those who prefer a big fish or two rather than lots of little ones, a switch to larger lures is in order. Both options work well when conditions fit, so it’s purely a personal choice.

I’m torn between wanting to catch lots of fish and a desire to snag a few big ones. To demonstrate why it isn’t a great idea, consider this, something we have all witnessed and maybe done. A guy is fishing bait. He throws the bait out, puts the rod in a holder, winds up the slack, then heads for his equipment and picks up another rod and reel with a lure on it. All is well for a while: the bait is soaking while the angler casts a lure. Then the baited rod takes on a bend and here’s where things get dicey. The angler now has decisions to make. Should I reel in the lure line so the fish on the bait won’t tangle with it? What happens to the fish on the bait while I reel in? Did I forget to loosen the drag? Well, you can see the disasters that can happen. I’ve watched rods fly out of holders into the sea, an ambitious bluefish latch onto a rapidly retrieved lure, and of course the ever popular favorite—all fish lost!

Of course, I’m not bait fishing in these harbors in April. I start with my rod and reel, which is a compromise between a committed big fish hunt, and a quest for only school fish. I use a 9-foot medium power rod that has a medium-fast or fast action tip, combined with a VS 200 spooled with 20-pound test Sufix Performance braid. The outfit allows me to cast both small spring lures and large plugs will equal efficiency. This outfit also provides the power to manage large fish while still giving the school fish a chance to put a good bend in the rod.

To satisfy my appetite to simply catch fish, I begin with several small lures including 3/4- and 1-ounce bucktails tipped with short pork rinds, 4-inch soft plastics on similar size lead-heads, and even light tins with short narrow-gauge tubes. How many fish does it take to quench my thirst? Well, it depends on the day and the conditions. It also depends on whether or not I see either evidence of large fish or someone catch a large fish. I try to resist bouncing back and forth every few casts between the two strategies because that never works. It takes time to “feel” the mood of the fish, get into a rhythm of cast and presentation before an angler can start catching fish. “Bouncing” is a classic mistake I see anglers make over and over again and I confess I’ve sometimes succumbed to the temptation. Therefore, I try to remember what several great anglers have told me and something I know to be true: change your presentation before you change your lure!

Once satisfying my “itch” with school fish I’ll try for a bigger fish or two, with no guarantee of success.  Although I use the same rod and reel, I switch from small lures to larger ones. I don’t typically use very large lures, rather opt for medium size ones that do offer a longer and bulkier profile. I should point out that these same lures are effective both day and night at this time of the year, but daytime presentations are a bit faster.

Almost any 6- to 7-inch floating lure will be effective, and likewise any light color by day and slightly darker color at night. Since my nighttime sorties are over, I fish only in daylight, and I like several lures in bone or almond colors. Yo-Zuri makes a bone colored Hydro-Minnow in 6- and 6-3/4-inch sizes. The minnow has a roll and wiggle action when retrieved at both normal and very slow speeds. Furthermore, on some days I pull the lure down, hustle it forward a few feet and then let it rise toward but not get to the surface. Similarly, the 6-inch and slightly larger version of the Mag Darter is effective and here too, I prefer the bone color. Daiwa’s SP Minnow has been popular in recent years because of long casts and consistent action. Again, both the 6-inch and larger model are effective and in bone color. I apply the same presentations with all three lure styles including the pull down, wiggle, and let rise techniques. I always have a 1-ounce Cotton Cordell pencil popper with me for those special days, especially later in April, when fish begin rising to surface baits. Since I love the “rock-and-roll” action of a C-10 RedFin, I also carry one on calm days. Finally, there are days and nights when small (less than 6 inches) metal lipped swimmers are effective, and I always have one in my bag. A slow but steady surface wobble is best for this lure.

Fishing is never the same year-to-year or even day-to-day. My strategy of being ready for large or small fish covers more situations than a one-trick approach. Then there are details of weather and bait and presentations. Put it all together on the right day, and there’s excellent opportunities for success. So, keep the tradition alive and start your 2020 surf fishing on the North Shore.