Bottom brawlers get to strike the ultimate punch in October as black sea bass season reopens from October 8 to October 31 with a 10 fish limit at 12-1/2 inch minimum size; it then jumps on November 1 to a 15 fish bag at 13-inch minimum size until December 31. Most anglers are going to focus on those sea biscuits, but there’s a strategy in rigging up for other bottom denizens to make it a true “combo” trip.

Porgy season is open year round with a 50 fish bag at a 9-inch minimum size. Triggerfish abound, and you can always throw in the random cod, blackfish or pollock in the early fall months. Here’s how to line up your order for a combo trip.

“Our main fare will be sea bass once the season opens October 8,” states Gina Lawrenson of the Carolyn Ann III in Barnegat Light. “Our fares love to fill the coolers with keeper fish. At that time of year the wrecks are loaded with the fish since there hasn’t been much pressure.”  According to Gina, those sea bass have been on the structure since September, but as of October 8 we’re finally allowed to target them.

“Mainly we work the inshore wrecks anywhere from about 6 to 15 miles offshore usually in about 65 to 90 feet of water,” Lawrenson said, adding “That’s provided there is no storm or hurricanes rumbling through. If there is a major storm, they tend to push off even further and we will run to them, but we always hope nothing big in the way of hurricanes comes through.”

Generally, Gina’s anglers will drop the standard dropper rigs baited with squid or clam, but hardcores will bounce the bottom with shiny metal jigs like Ava 27 to 47 size for the bigger sea bass. Droppers are tipped with any kind of 3- to 6-inch grubs like from Berkley or ZMAN in green chartreuse and pink colorings.

But it’s not all about the biscuits. “Unfortunately we get a ton of fluke when bottomfishing and they must be thrown back, but luckily there has been a lot of action on triggerfish in recent years,” said Gina. “Triggers require you to scale down to a 2/0 baitholder hook and you want to fish up a bit higher off the bottom like 2- to 6-foot or so, reeling up above the sea bass. Porgy fishing is also top notch in the later part of October. They tend to swim above the wreck and the best way to find them is listen to the captain saying how many cranks off the bottom to reel up to get into the schools or just slowly hit bottom, then reel in slowly until you find the schools as they swarm above a wreck.”

Gina also states that bottom trips in October may see some cutlassfish, and other oddities like jacks or bonito and tropical oriented species if the waters stay warm during the early part of the month. With the COVID pandemic, reservations are required on the Carolyn Ann III and so many other local headboats, but Gina said anglers call or text the new number at 856-313-5493.

Capt. Bob Cope of Full Ahead Sportfishing runs out of Cape May, where like so many other local captains below the north/south border, the sea bass opener requires a bit of travel.  As Cope explains how the southern part of the state is unlike the northern section as waters tend to be shallower in general and reaching deeper water usually means a bit more of a run.  “At the start of the sea bass season we head to the 100-foot depths and further out,” Cope said, adding “For some reason the fish tend to stay more offshore than up in North Jersey where they may be in 80 feet or so, but we hit the 100 to 120 foot depths.”

Cope relays that sea bass mainly stage on the structure piles and wrecks, specifically on target areas in the Deepwater Reef and DelJerSea reef sites. “In October, the sea bass are hitting the usual hi-lo rigs baited with fresh or salted clams, but guys will also drop jigs so long as the structure isn’t too sticky,” Capt. Bob noted, adding “Come late November those fish will be pushed further off 50 to 60 miles and more, but we have them in relatively close throughout October depending on the water temps.”

Various other species also abound off the Cape May shores. “For other species, triggerfish have really been populating all the wrecky areas we fish for sea bass.  In the past few years we’ve also seen some of the best porgy fishing we’ve seen in a long time. They definitely provide more opportunity now you can count on for added attraction besides the sea bass.”

Though porgies and triggers fill in a lot of the gaps, many Cape May county charter and headboat anglers will head out to the sea bass ground with other target on their mind. “Many times after we load up a haul of sea bass, the charters want to try for blackfish on the way in. That’s usually really productive as even though it’s a one-fish limit for October we can pull on a bunch on bigger ones using tog jigs and crab baits,” Cope said, adding “It’s the perfect time of year to nab blackfish, even though it’s a one fish limit, we are already fishing their depths so we can head out to target a trophy tog to add spice to the mix.”

Any way you slice it, sea bass season should open with some fury in October as the stocks haven’t been pressured for quite a few months. Gear up for the biscuits, but also bring the extra target tools to work on all the other combo species available in the early fall bottomfishing months. 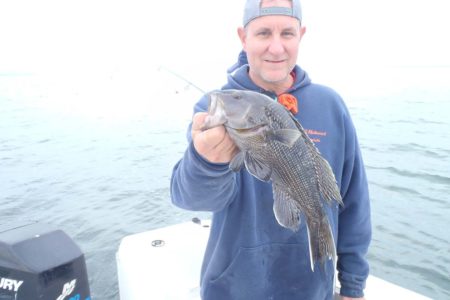