A simple, old-school technique that still puts fish in the box.

As we trolled through the area where we had the last bite, all eyes watched the rods. “One on!” and then, “Two on!” came from the cockpit as the drags from two reels sounded off in unison. “C’mon baby, let’s make it a triple!” I added. Unfortunately, no third bite would come on this pass, and the boat was pulled out of gear 15 seconds after the initial bite. As the two anglers worked their adversaries to the boat, the other lines were cleared out of the way. Soon, two nice-sized “greenies” (green bonito) were lifted aboard and bled before being placed in the cooler.

Scenes like this can play themselves out both on the offshore and inshore grounds when trolling small feathers for bonito, false albacore, skipjacks, and even school bluefin and mahi (dolphin). Many consider these lures a simple, old school technique when compared to some of the lures of today, but these oldies are still as effective today as they once were when trolling for pelagic speedsters.

The trolling feather has been around for quite some time and is nothing more than a lead trolling head with a hole through the center for the line. Feathers are wrapped (tied) around the shank of the head to form the body of the lure. The line passes through the head and is tied to a hook. These lures are relatively inexpensive and can also easily be made by someone wanting to make their own. Some manufacturers make larger ones with resin heads, but these tend to be geared more towards larger tunas.

You’ll likely find some sort of trolling feathers in any local tackle shop that deals in offshore tackle. If not, you can either order them online or pour your own. Do-It Molds, for example, makes two different molds: #SLIP-6-A or #TL-4-A that will work for this and both come with multiple sizes in the same mold.

Once you have the head it’s easier to paint them before you wrap it with the feathers. I use the same vinyl jig paint on these as I use for my inshore bucktails. Next, you can use a stiff piece of wire, a paper clip, or tube fly mandrel in your vise in order to hold the head. Slide the jig head over it with the nose pointing towards the vice. Start a layer of thread, and apply a small amount of Zap-A-Gap to help the thread stay in place on the jig and prevent the wrap from spinning.

Next, wrap in a small handful of feathers. I use saddle hackle as the feathers when tying my own. You can vary it up and make two-tone or multi-color if you’d like. Finish wrapping with a couple of finish wraps or half-hitches, and then give a light coat of epoxy or thread sealer over the threads. You can also include a wrap of some Mylar or reflective tape over the threads to give them a little more protection and flash, but this step is optional. My favorite color combinations are red/white, black/white, green/yellow, and black/purple, but by no means are these the only color patterns that work. Don’t be afraid to experiment with different patterns and see what works for you.

The keys to fishing these lures effectively is to get them in the right location in your spread and to not use too heavy of gear to fish them with. Since these lures are already lightweight, don’t overload them by using heavy leaders or too large of hooks as it will take away from their action. Relatively light mono leaders (30- to 50-pound test) with 4/0-7/0 sized hooks are plenty. When rigging them up, insert a small bead between the head and the knot of the hook eye. This just helps protect the knot from grinding against the lead when you hook a fish. I like to have the hook in the feathers so that it’s not sticking out the end, but near the end.

Feathers are typically fished in the second or third waves behind the boat with one on each side of the prop wash and another on the outside of each of those. To prevent the lure from jumping around ineffectively and to keep it in the water, clip the line to a clothes pin or release clip low to the water to keep the line angle down (AFTCO Roller Troller Flat Line Clips work well here.). For smaller vessels that have trailer eyes on the stern these are great places to attach the clips. If nothing else, you can always use a rubber band on the line looped to the back of the reel or a cleat to keep them low.

A trolling speed of 6 to 8 knots is typical, but every boat is slightly different and it will also depend on the sea conditions. You want to find a speed where the white wash starts to hit the back of the boat and you have a few nice lanes of clean water in your wake. Fish your feathers in those lanes. It pays to have several different weight heads on hand to adjust to different conditions and what the fish want on a given day. 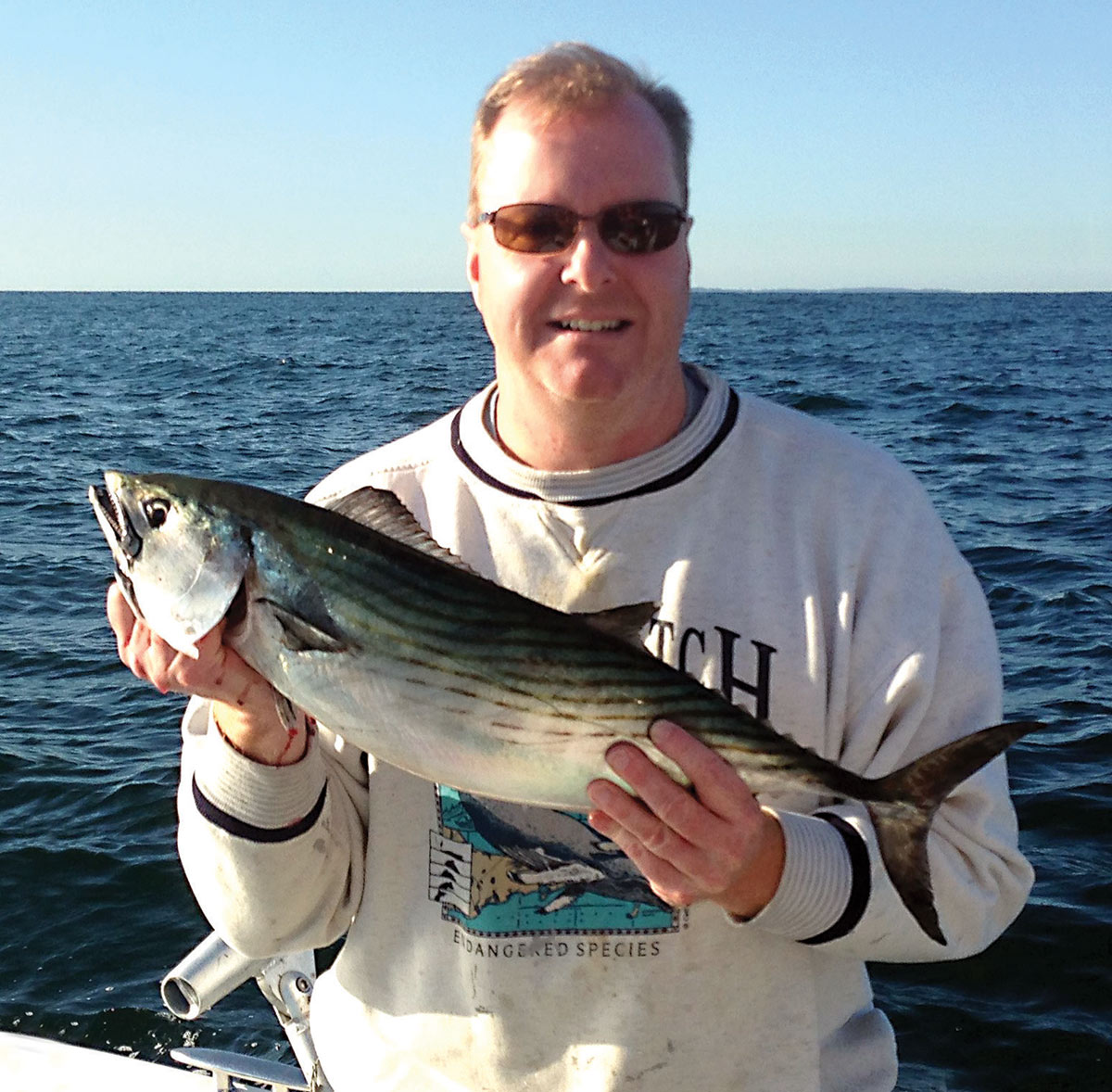 When you get a bite, don’t stop or slow down right away. Instead, wait 10 to 15 seconds before you pull the throttle back and you might just get a double or triple. Tuna are schooling fish and multiple bites at once are common.

When there are fish in the area don’t be afraid to pop the line out of the clip and, while keeping the rod tip low to the water, give them some jigging motion. It’s not something that you want to do all day, but if you know that there are fish in the area it might just elicit a bite. You may need to drop them back a little further (3rd or 4th wave) for this trick to work properly.

When trolling, make sure that you’re using a reel with some line capacity because when these fish strike, they HIT and RUN. Small baitcasting reels or other ultralight tackle may be fine while chumming, but they simply don’t have the capacity to handle these fish while trolling. A conventional reel in the 15- to 30-pound class that has more line capacity (at least 275 yards) is a minimum. Some of the larger spinning reels (with large capacity spools) can also be used. I prefer 20-pound test line in most cases when trolling, but if larger tunoids have been present I jump up to 30.

Feathers will keep for quite some time as long as you keep them dry and away from moisture when storing them. Wet feathers will develop rot over time so make sure to dry them out before putting them back in the box with the others.

The next time you’re pursuing these speedsters, put a feather out and be ready for some fast action. It may be “old school” but it still works. Don’t forget to wait a few when you hook one before pulling back the throttle – maybe you’ll hook a few!