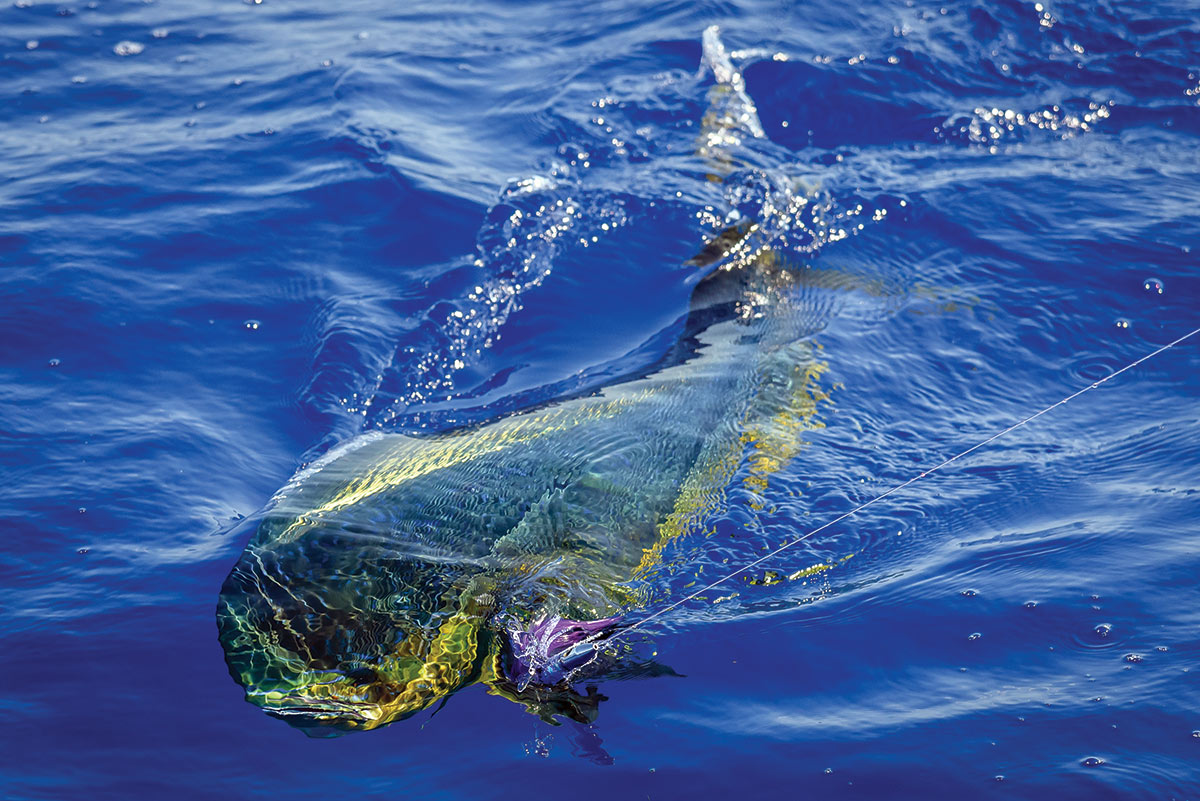 A hardcore mahi fan shares some tips that could help land you high up on the Dream Boat leaderboard this season.

If you take a look at last year’s final mahimahi standings you will notice that nine out of 10 entries were caught after July. If you go back another year, not one mahi weighed into the Dream Boat Contest was caught in July. There is a good reason for why this occurred. Mahi grow so fast that studies have shown that in their first year of life they may grow as much as 3 millimeters (.11 inches) a day. A 1-year-old mahi may range in size from 23 inches to 55 inches.  So the mahi that first appear in July may be small but by the time they are ready to migrate down south these same fish have grown a tremendous amount. That’s why most mahi weighed in for the Dream Boat Contest come late in the summer or early fall.

In order to grow, they need to eat. I recently read that a 6-pound mahi that was placed in captivity weighed 54 pounds nine months later! I’m always interested in what is in a fish’s stomach after I’m done filleting it.  We looked inside the stomach of a 16-pound mahi that we caught last year and inside we found five half-digested big needlefish along with several peanut bunker that we were using.

Mahi are by far my favorite fish to target, but for many anglers they serve as bycatch while looking for tuna. During the period from July to October, we make it a point to specifically target them. Since I write for The Fisherman I am not eligible for the contest so I don’t mind sharing a few tricks that might give you a chance at winning the mahimahi division of the Dream Boat Fishing Challenge.

If you are trolling and you hook up with a mahi it’s important that you don’t stop the boat. You can slow down but do not stop.  I also suggest you clear all other lines. Unlike tuna that hit the surface and then dive deep, big mahi will use their long skinny bodies to glide across the surface and tangle your lines. Mahi usually school in large numbers when they are smaller. However when they get bigger they often pair off. Knowing that mahi rarely swim alone, I started to experiment with an idea that I hadthatinvolved live bait. I refer to it as the “bread crumb trail.” Once you hook up, designate a person on your boat to throw out a live mullet or peanut bunker every 30 seconds. If the mahi wasn’t alone when you hooked it, there is a good chance that one or several other mahi are following the hooked fish back to the boat. The second you gaff the mahi, stop the boat and throw a hooked bait in the water. It’s the same premise as leaving a hooked mahi in the water. This little trick has worked a number of times for us.

I will admit that finding mahi often takes some luck. In what seems to be an endless ocean luck comes in the form of something floating. Sargassum weeds, 55-gallon drums, pallets, tree trunks, small crab pot buoys, high fliers, the list goes on and on. I have never once found mahi under a floating Mylar balloon, and they are everywhere. Fisherman Senior Editor Fred Golofaro used to fish out of Montauk with the late Capt. Walter Haab who would lay out a canopy made up of sheets of newspaper to concentrate the mahi once he encountered them in an area.

Now, let’s assume you get lucky and find something floating while you are trolling. Everyone wants to see what’s under the floating object so they troll right next to it. If your buddy is standing on the gunnel trying to look below the floating object you are way too close. By the time your lure gets to the floating debris your boat has already spooked the fish.  Try to stay about 20 yards away as you troll by. If I don’t hook up and I’m pretty confident that mahi should be under what we just trolled by I turn the boat around and instruct my crew to reel everything in. You are out there to catch fish. Don’t be lazy when the opportunity presents itself. Plus it’s never a bad idea to reel in your spread to check for weeds that you might have picked up on your lures. Once you’ve reeled everything in head back to the floating object and toss in something live. If you don’t have live bait with you drop a bucktail down about 100 feet and reel up as fast as you can. If nothing follows then it is time to move on. You will be shocked at how many times mahi are there and they just didn’t hit on the troll.

See Them But They Won’t Eat

You often hear fishermen say that mahi will eat almost anything. I tend to agree, however it doesn’t always mean they are willing to eat. Nothing is more frustrating than looking down at a couple of mahi that won’t eat. It’s usually the large fish that have lock jaw. If you come across this situation try to remember what you are about to read. As much as I have faith in live bait there are times that mahi show no interest no matter what you put in front of them. You need two people to make this trick successful. Have one person throw out a popper. Keep doing this several times. If you have any shot at catching these fish you will notice that they will change their color. Quite often a dark thick vertical color change means they are riled up and ready to attack. Once you notice their change in appearance and demeanor it’s time for the second person to get involved. Continue throwing the popper out, however this time have the second person throw a swim shad or a live bait right behind where the popper is. Reel slowly trailing the popper. I promise you that if these fish don’t attack the popper or the trailing lure/bait you will not catch this fish. It’s time to move on.

What To Look For

I have never taken my boat to any of the offshore canyons. When I target mahi I’m usually 10 to 40 miles out. Some years we get lucky and a warm eddy breaks off from the Gulf Stream and makes its way inshore. These eddies often contain many other pelagic species besides mahi. If an eddy is within my comfort zone then that is where I’m going. It doesn’t mean that you won’t catch mahi if there isn’t an eddy. You just need to know what to look for. I suggest you subscribe to an online service like Terrafin that will provide you with sea surface temperatures and chlorophyll (determines water clarity) charts. When clean water is found among warm sea surface temperatures that is an area you want to target.  Mahi love warm water. I have caught mahi in 72-degree water in July and I have also caught them in 66-degree water in the beginning of October.

Whether I go out looking for tuna or mahi I always have live bait on the boat. I can’t stress this enough. It could be peanut bunker, snappers, spot, mullet or small mackerel. If you can’t get live bait then make sure you have squid on board. There is one more thing that is a must if you want a chance at winning the mahi division of the Dream Boat Fishing Challenge: a good pair of binoculars. If you are looking for mahi, binoculars come in handy for scanning the horizon for floating debris. Good luck, and I hope this helps put you on the mahi leaderboard this season.