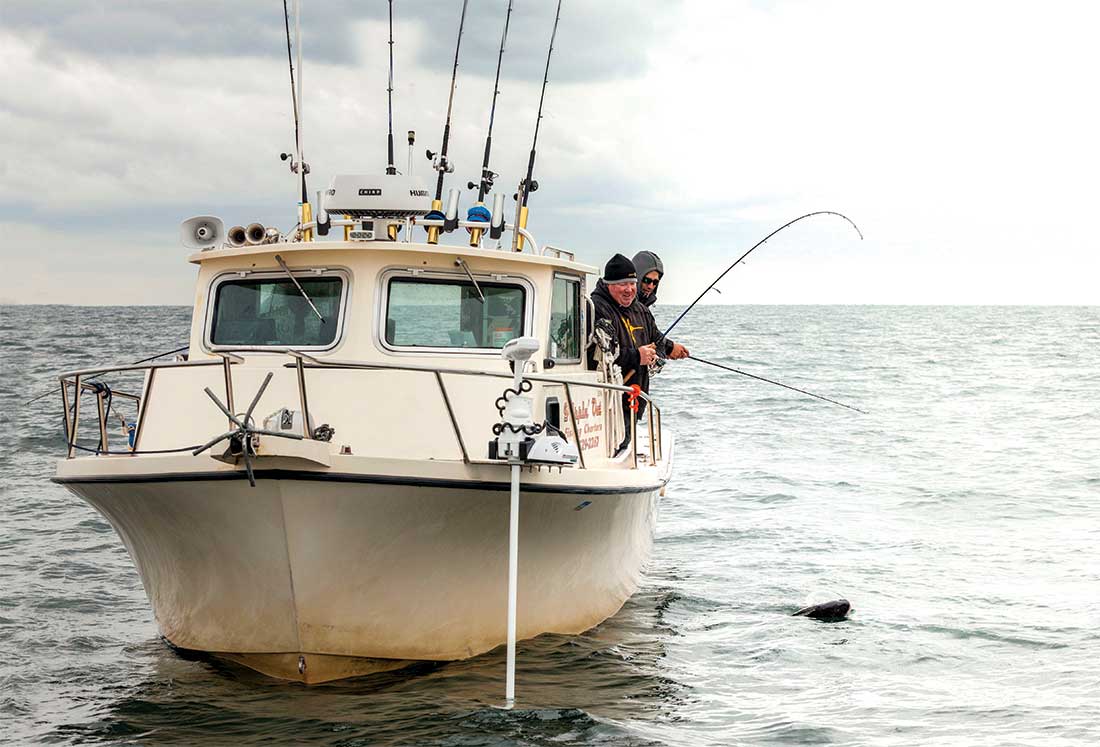 One of the most highly sought-after inshore fish in recent years, the blackfish (also referred to as tautog or just tog) has a reputation for being one of the strongest pound-for-pound fighters. Anglers fishing offshore wrecks beef up their tackle to target these brutes and still return home with stories of lost fish and broken 50- to 100-pound leader material. There is no question why fishermen get anxious as tog season approaches.

Despite the blackfish’s hard-fighting nature, recent advances in technology have created a movement towards lighter tackle. The pool-cue-action rods and conventional reels are being phased out by light-action spinning outfits loaded with braided line. This movement has transformed the highly-prized table fish into more of a sportfish, with catch and release growing more popular in recent years.

Few anglers know this better than Captain BJ Silvia of Flippin’ Out Charters. “It’s amazing to see the change in my customer’s mindset,” stated the captain. “Everyone wants to catch tog using jigs on light tackle, and there is no better time to do this than the spring. Big fish pull from deep structure as they move shallow to spawn.” Targeting fish in shallow water allows the angler to lighten their rig, which offers the chance to lighten the rod and reel. The same fish caught with heavy gear in the fall is now caught with spinning outfits resembling freshwater bass tackle.

The hunt begins with understanding the seasonal pattern of the fish. “My early-season trips start in the ocean and follow them in day after day. These fish move fast, working their way up into the bay, stopping on key areas along the way. The only way to know if a spot’s productive yet is to fish it,” said Silvia. This time of the year it becomes increasingly important to avoid fishing last week’s pattern or even how you caught them the day before. A reef once loaded with big fish will empty overnight as they migrate with the spawn in mind. Being agile and quick to change is critical to consistently putting his clients on both trophies and numbers.

“If I pull up on a shell bed and catch a small number of males, it tells me I’m close but not on them. I may be just behind the motherlode, or perhaps I came in too far ahead of them. Spring time tog is when you get on giant numbers if you’re in the right spot. I never hang around an area if the bites are coming few and far between; it just tells me that the mega-school is nearby.” To aid in this run-and-gun approach, BJ has equipped his 25-foot Parker with a 72-inch Minn Kota Riptide Ulterra trolling motor. The time-consuming anchoring process is replaced by the motor’s Spot-Lock feature, which utilizes a built-in GPS. “It takes me five seconds to anchor and only five seconds to pull it,” joked the captain. “Adding a Minn Kota to my boat allows me to fish 15 to 20 spots a day until I find the fish. I press a button and my boat doesn’t move more than 2 feet. If they’re not on a spot, I just pull the motor and jump to the next one.”

One of BJ’s keys to catching monster blackfish in the spring is hunting for them year-round. “Small, isolated pieces of structure that don’t show up on charts often hold the big, unpressured fish. These spots can be hard to find so I’m constantly looking for them, even when it’s not tog season. It doesn’t matter if I’m pulling plugs for stripers or scanning the horizon for birds diving, I am running MEGA Side Imaging 100 percent of the time. A subtle muscle bed 50 feet long can hold hundreds of tog, and the only way to find them is with Side Imaging.” When fish-holding bottom is found, a waypoint is dropped on his Humminbird SOLIX and the captain makes note to check it when tog season approaches. The tog mindset is in effect anytime his boat is in the water, regardless of which species he targets. By doing this, BJ has amassed hundreds of waypoints as he follows the spring migration route from open ocean to shallow waters in the bay. These spots range from isolated boulders and ballast dumps, to small shipwrecks and muscle beds. 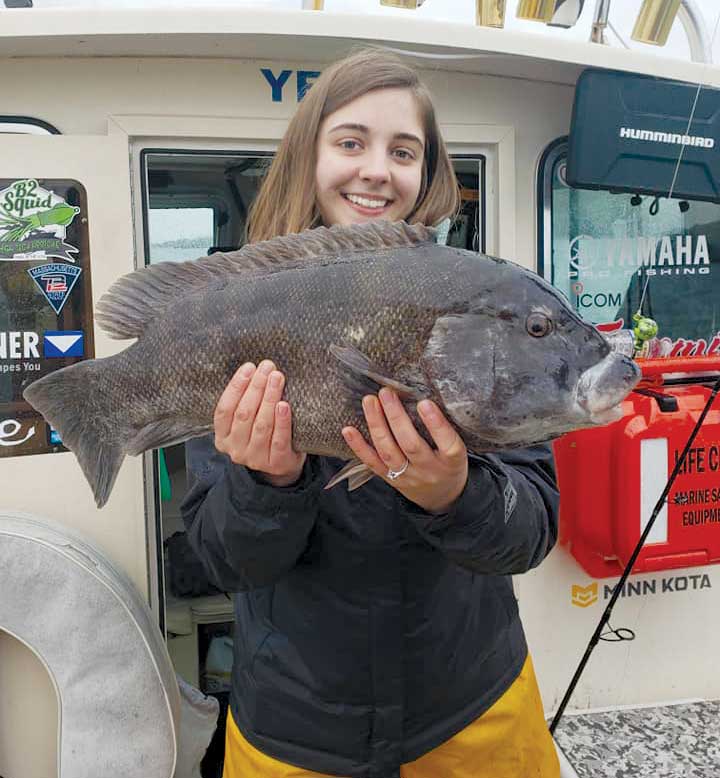 Once fish are located, the real fun begins. “Today’s light-action rods are different than what I grew up with. Nowadays I think nothing of taking a Tsunami Slimwave rod (SWSPS 701MH), loaded with braided line and putting the juice to a double-digit tog,” said Silvia. “These rods are soft enough to allow for a fun fight but have plenty of backbone to go toe-to-toe with a big fish.” Line size is determined by cover, more so than fish size. In open-water situations 15- to 20-pound braided line with 20- to 30-pound fluorocarbon leader is preferred. As the fish gravitate towards pylons and other snags, it’s not uncommon to use 50-pound braid with a 50-pound leader. The goal is to use as light a leader possible, particularly in clear water, while minimizing the risk of breakoff.

When using rods with a softer action, it is critical to use a high-quality jig. The jig must offer a light wire hook to ensure good hook penetration while being strong enough to hold to the power of a big blackfish. BJ Silvia uses Backwater Custom Baits Football Jigs in 3/4-, 1- and 1.5-ounce sizes. The head style is modeled after freshwater bass jigs designed to be dragged across rock while minimizing hang-ups. “I like a football jig because it snags less and presents the crab without rolling or tumbling. The hook is sharp and they rarely come unbuttoned when stuck.” Jigs are tipped with either Asian or green crabs, the captain hinting a preference for Asian crabs in the spring. “I don’t know the science to it, but they seem to prefer the softer crab and baits in the spring. I’ve seen days where a jig tipped with a sandworm out-fished everything else. You have to experiment.”

The technique itself is simple. A football jig, tipped with bait is sent to the bottom where it is deadsticked. “It’s really misleading when we talk about ‘jigging for tog’ because a lot of guys think it means jigging the rod and hopping the crab off the bottom. When we talk about jigging, we’re just talking about using a jig. The more your crab moves, the less bites you get.” Further proving this point, the captain notes that he gets more bites when using a trolling motor than a traditional anchor. “If I can notice the difference in bites from being perfectly still with Spot-Lock versus slowly swinging on an anchor line, it tells you there is no reason to be violently jigging your crab.” When presenting baits for tog, less is more.

Springtime blackfish is an exciting time. The active process of finding a mega school is an adrenaline rush in itself. Once found, an entire bushel of crabs is instantly devoured with rods pinned to gunnels. It’s the time of year where the tog’s need to reproduce overtakes the desire to feel protected in wrecks and boulders, allowing anglers to lighten their gear and enjoy the fight in open water. The simple change in equipment and how we approach hunting tog has transformed its very nature from being a table fish to a sportfish. As drags scream and anglers hold on for their lives, it’s no question why the popularity of blackfish increases every year with more people releasing the larger females to swim another day.

BJ Silvia runs Flippin’ Out Charters out of Newport, RI. You can reach him at 401-529-2267 or visit his website http://flippinoutcharters.com/.