It usually kicks off by the May 1st opener, attracting anglers by the droves from around Long Island and beyond. I’m talking jumbo sea porgies and quality weakfish, as well as a sprinkling of fluke, striped bass and bluefish. Best of all, with the exception of striped bass, all four species mentioned are eligible for the 2019 Dream Boat Contest. And judging by the quality of porgies and weakfish that enter the Peconic Estuary each spring, latching on to the Dream Boat Grand Prize or one of the many other great prizes is well within reach for Fisherman subscribers. With several open and charter boats getting in on the gold and silver rush, anglers have the opportunity to get in on some exciting mixed bag action in Peconic and Little Peconic bays. Check the Report Section ads in this magazine for boats targeting the spring run in the Peconics.

A Wealth of Opportunities

By late April/early May weakfish travel through the Shinnecock Canal and congregate around areas such as Robins Island, Jessup Neck and Noyack Bay in order to complete their spawning cycles. At about the same time, large sea porgies enter the Peconic estuary from the deep cold ocean waters of the Atlantic. The weakfish seek soft bottom for their spawning ritual, while porgies prefer a hard, crusty contour. With several types of habitats making up the Peconic’s floor and countless feeder creeks spilling warm water throughout both bays during the spring, the Peconic Estuary is tailor made to accommodate the duo, along with many other species throughout the spring, summer and fall months. Since water temperature and salinity are controlling factors of the survival and viability of all fertilized eggs, the actual spawning occurs during the May and June full moon phases. Once the spawning cycle is complete, (which is usually by the end of June) the majority of the large fish vacate the area and head for the deeper, cool waters of the Sound and ocean where they spend the summer and early fall season. Shortly after the departure of the spring run fish, the smaller porgies and weakfish will fill the void and settle in for the summer months.

Hands down, Noyack Bay has taken top honors as one of the hottest weakfish spots the past two years, while Jessup Neck and the western end of Shelter Island are the places to be for jumbo scup. Last season saw incredible catches of weakfish from late May into August. Hopefully this season will be a repeat of the past two years from this area. Anglers have reported fish to 8 pounds and catches of as many as 30 fish a person per tide. The area east and west of buoy 16 has been where the bulk of the weakfish have been settling in for the spring and summer. South Fork sharpie Ken Morse of Tight Lines Tackle in Sag Harbor suggests that during the incoming tide, start out by the 16 buoy in 12 feet of water and drift south to 54 feet of water. Aside from weakfish, buoy 16, has a bit of everything according to Ken, with jumbo porgies chewing down squid and clam strips during May and June. Bluefish and even some big stripers are frequent visitors during the same time frame. During the summer and into autumn, kingfish, blowfish, summer-run weakfish, snapper blues, bay porgies and even some quality sea bass make up the mixed bag action. Anchoring and chumming with frozen clam logs anywhere along the drop-off with hi/low rigs baited with strips of clam and fresh squid strips often produces steady action with sea trout and scup. The current is moderate here at peak speed with 3-ounce sinkers and 1-ounce jig heads usually sufficing. Therefore baitcasting and spinning outfits in the 10-to 15-pound class will serve you well for fishing in this area. Ken added that if you find for some reason the buoy 16 area is not producing, wait until the current begins to ease and head over to buoy 17 by Jessup Neck and fish the 70-foot depths where big sea porgies and some nice weakfish await your effort. Once the current changes and begins to push hard here, Ken suggests picking up and moving since the current pushes much harder during an ebb tide. Prime time here is the last or first hour of either tide.

Nassau Point is an excellent area that often produces good size weakfish and jumbo scup. For whatever reason, the area is very lightly fished, while Jessup Neck is often cluttered with open, charter and private boats. Depths fluctuate off Nassau Point as the average water depth surrounding the point is between 25 and 35 feet. However, red buoy 22 supports a deep pocket of water between 60 and 70 feet. This deep water pocket can provide some excellent weakfish action on both moving tides during the spring and summer. Working this area thoroughly will certainly increase your chances of keeping those rods bent. Just opposite of Nassau Point, Rose Grove gives way to excellent scup and weakfish action that really lights up from spring through September. The west side of Shelter Island plays host to the infamous area known as the Green Lawns, which gives way to some big fluke throughout the spring. In addition, this area holds a healthy population of jumbo porgies and a few respectable weakfish. Further west, the southern tip of Robins Island (South Race), buoy 25 and buoy 26 are chock full of scup and produce occasional shots of weakfish. Drift this area near the buoys where the contour drops or rises (depending on the drift pattern) from approximately 18 feet to 30 feet of water. The current can really rip through here so fish this area as the current eases and especially on a tide change. 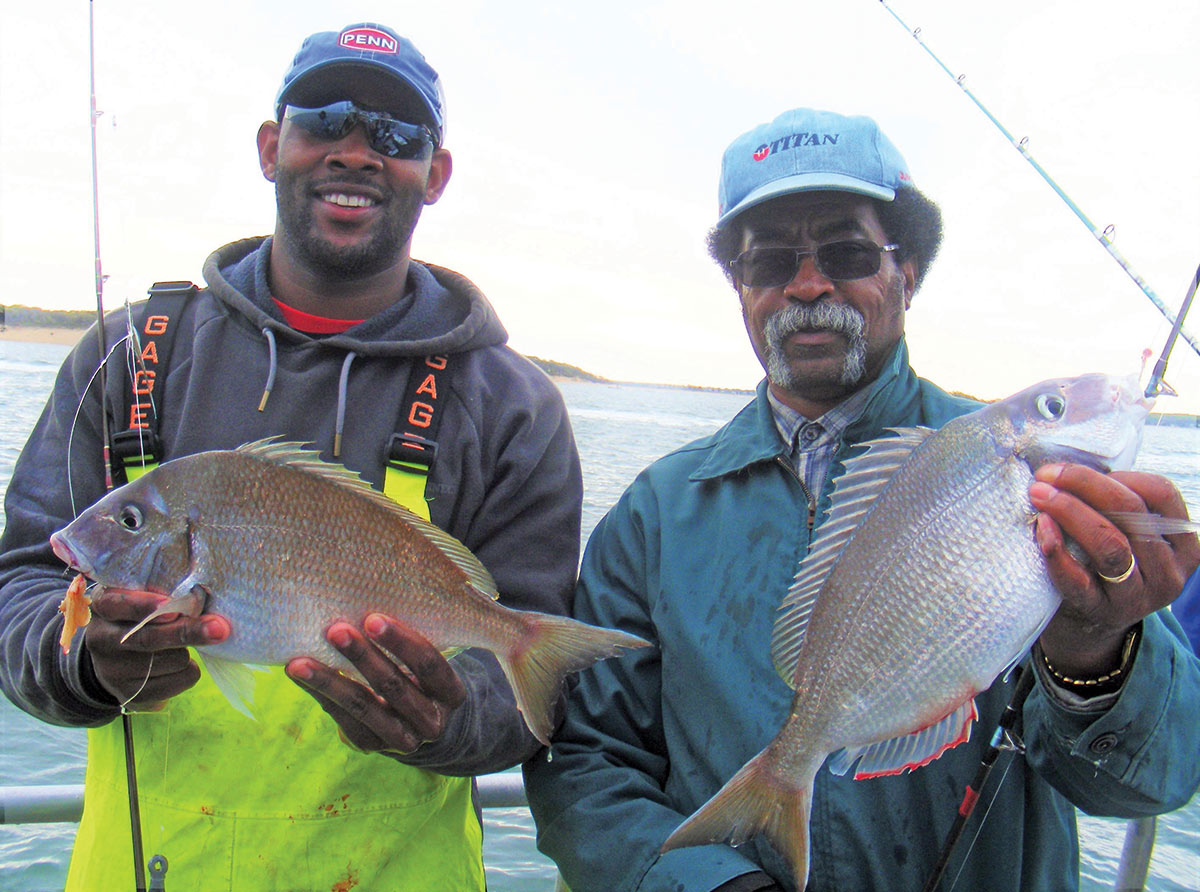 Lastly there is the area that surrounds Roger’s Rock, which is chock-full of rocks and rough bottom that is tailor-made for scup. Since this is a relatively large area, you can run into a school of porgies at any given time. If you are looking for a starting point, try just east and north of the obstruction buoy or along the edges of where the rocks meet the sandy bottom in 20 to 25 feet of water along the north side of the rock. Anyone heading to Rogers Rock for porgies should anchor on the backside (east side) of Roger’s in the 10- to 15-foot depths. A couple of chum pots filled with frozen blocks of clam chum should keep the action fast paced. Keep in mind that shallow water porgy fishing is often torrid just after dawn or just before dusk, however, daytime action can be torrid as well, especially if you bring the clam chum. While clams and squid often work just fine on the scup, having some sandworms on hand can be a day saver as porgies rarely pass up the red meat, especially when the barometric pressure is on the rise.

Drifting is best when the current flow is slow to moderate. Both weakfish and porgies respond well to drifting. Stronger currents call for anchoring, especially in the deep areas and should that be the case, clam chum is paramount to getting and keeping fish under your boat. Regardless of where you may wet a line, don’t leave home without a navigation chart, especially if you are trailering and visiting the area for the first time. Yes, GPS does a great job of keeping tabs on where you are, but the charts can be studied and potential spots can be pin pointed and put in the GPS for future reference. Then again you can leave the boat at home and hop on one of the several open boats that take advantage of the exceptional spring fishing in this area.

You should come prepared to handle most situations that may arise. This includes 2- to 4-ounce AVA diamond jigs should the bluefish start blitzing, which can occur just about anywhere in the bay at any time. Swimming plugs, especially Yo-Zuri Crystal Minnows tossed at the rips during an outgoing tide before the sun rises off Jessup Neck can be exceptional during the month of May for stripers. Keep in mind that once the sun comes up, the bluefish take over. Fin-S Fish, Bass Assassins, Berkley Gulp, and Tsunami swim shads fished on 1/2- to 2-ounce leadheads are just a few soft body plastic choices that will put a beating on weakfish, stripers and fluke when those species are feeding in an area. Spro Squid Tails and Prime Bucktails have produced some excellent results for me. The Squid Tails have been especially hot the last two seasons on weakfish. We jigged them right along the bottom, and best of all, we fished them without the help of any enticers on the hook.

As for rigs, standard high/low and porgy rigs are properly suited for the Peconic pork chops. Clams, worms and squid are the way to go for scup. If you are set on employing bait for the weakfish, pendent shape squid strips applied to a high/low rig will certainly catch their attention, and sinkers from 2- to 4-ounces should suffice.
Slowly but surely, the Peconic Estuary is making a welcomed comeback from what had become some lean years. As fishermen, it is our responsibility to respect our environment by making sure all trash is contained until it can be properly disposed of back at the dock. Other than leftover natural bait and chum, there is absolutely no excuse for tossing any trash overboard. Also, practice self-restraint when it comes to keeping fish. Take only what you can use and be sure to obey all size and bag limits.