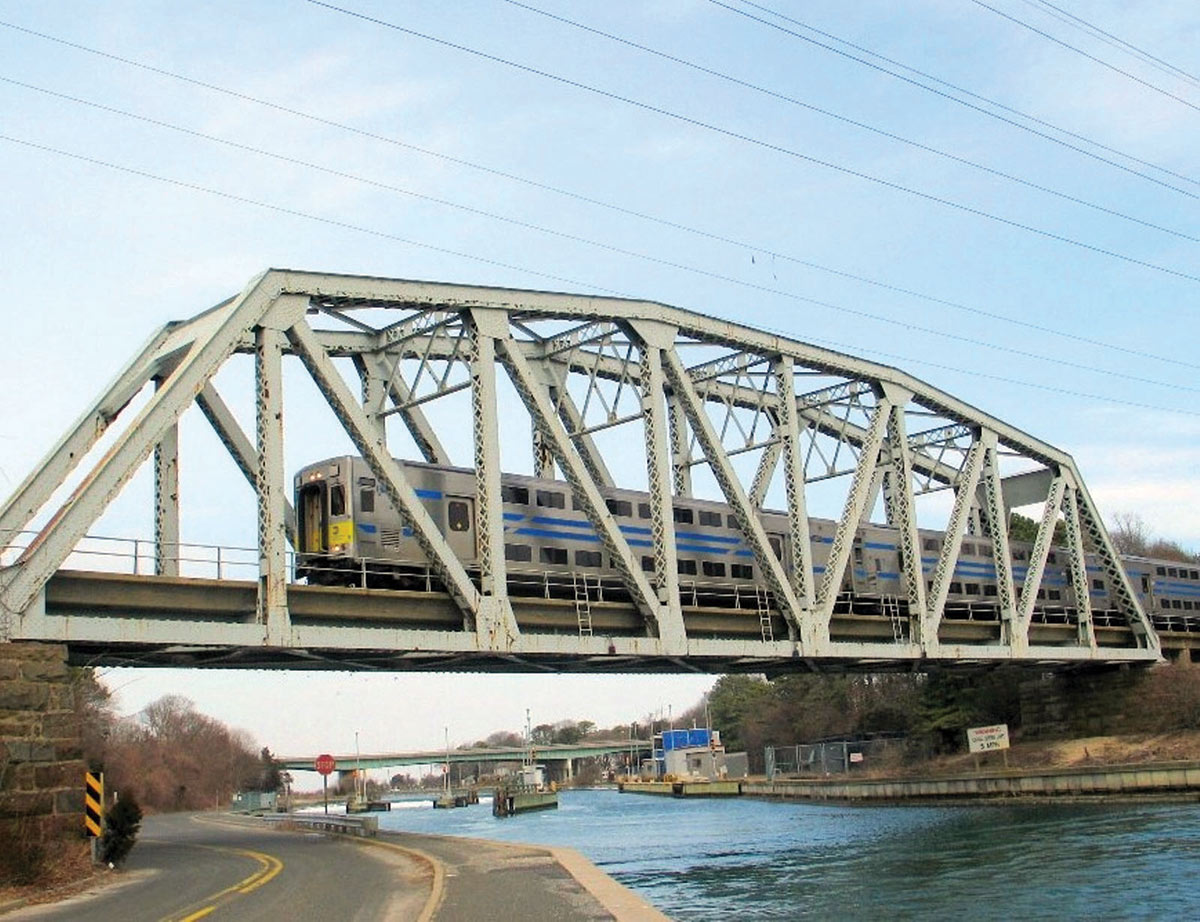 This narrow waterway is the key to some wide open fishing action as spring takes hold.

Last spring I made several stops at the Shinnecock Canal from late April through May to check out the action along the banks while recovering from an illness during this peak time of year to fish the canal. Needing to be around the action, I had just as much enjoyment watching rods bend as big sea robins, some keeper fluke, along with loads of shorts, and a few weakfish to 5 pounds were being plucked out of the ditch. Some big blowfish, a few short stripers and quite a few bluefish rounded out the catches throughout the month of May. Indeed the action that has been a spring ritual for as long as I can remember (nearly 50 years) sparked much interest among sharpies and novices alike. Judging by how consistent the fishing has been each spring, I have no doubt that this spring will prove to be any different. The Canal also provides enough action to keep kids entertained, and Fisherman subscribers with a good chance at scoring a big sea robin for this year’s Dream Boat Contest.

Located in the hamlet of Hampton Bays, Shinnecock Canal is a narrow, yet vital waterway that joins Peconic and Shinnecock bays, and is controlled by sets of gates. The influence to open and close is controlled by high and low tide. As the water builds from an incoming tide in Shinnecock Bay, it forces the gates shut. At the same time the tide on the Peconic side of the canal does just the opposite. Fishing at this point becomes quite simple as the swift current that rushes through while the gates are open is eliminated, making fishing with light tackle possible. This condition lasts for approximately six hours and once the tide changes, the entire process is reversed. To calculate the time that the gates will open or close, simply turn to the Tide Table page of the Fisherman, and select the high tide on the day you plan to fish under the Sandy Hook portion of the tide table. Subtract 3-½ hours from the time stated on the date you plan to fish and you’ll have the time the gates will close shut. To know what time the gates will reopen, add 2 ½ hours to the time and date. 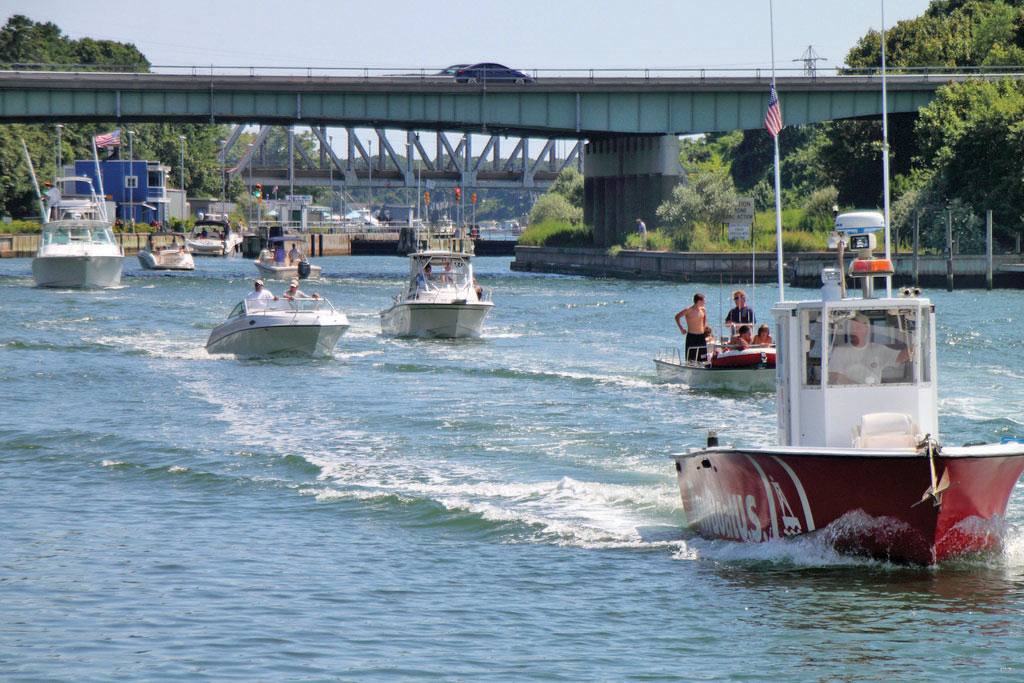 For the most part, the Shinnecock Canal is a migratory path for many species of fish entering or departing both Shinnecock and Peconic Bays. Since a myriad of baitfish often accumulate in the canal while the gates are closed, many bottom dwellers and gamesters will reap the rewards and prey on the available baitfish. During the spring, anglers from near and far visit this stretch of waterway as fluke, blues, stripers and weakfish are just inches away from your car.

The season kicks off with a shot of weakfish possibly as early as mid-April to early May. Weakfish are short-lived in the canal as they pass through Shinnecock Inlet, Shinnecock Bay, through the canal and into Big Peconic Bay heading for their spawning grounds that surround Robins and Shelter Islands. Locals will fish every day in anticipation of the early arrivals. Once the fish start funneling through, the bite can last a few days to a week. It would be best to give East End Bait and Tackle in Hampton Bays a call for an update before making the trek to the canal. Once the weakfish do arrive, the best of the action occurs during the last half hour before the gates close, when the current slows enough to bounce a half to one ounce jig along the bottom. Pink, white and motor oil color soft baits such as five-inch Fin-S-Fish, Bass Assassins, Mister Twisters and Berkley Gulp Power Grubs in pearl white, new penny and nuclear chicken fished on half to one ounce leadhead jigs bounced slowly along the bottom should get the weakies attention.

Fluke are also early arrivals and will most certainly be a bycatch on the soft baits before the season opener. Once fluke season debuts, bucktails tipped with white or green Gulp Swimming Mullet will entice the larger fluke that take refuge inside the canal.

Bluefish will terrorize the canal by early to mid-May and will continue to zip in and out of the canal throughout the spring and summer. Metal jigs such as 007s Kastmasters, Hopkins Shorties or just about any shiny object will catch the attention of the yellow eyes. Since bluefish have a mouth filled with fine razor sharp teeth, a 12-inch steel leader will help cut down the loss of terminal tackle from those wicked choppers. It is unavoidable that a few soft baits will fall victim to the blues, however, you can cut the percentage of losses by keeping the retrieve of the soft baits slow. Stripers will stalk the canal during the spring and while most of the linesiders will consist of shorts, a few cows will startle anglers employing Storm Wild Eye or Tsunami Holographic Swim Shads.

Big blowfish are lurking on the bottom and anglers casting tandem rigs baited with clams might catch them anywhere along the canal. A few big porgies will also take fresh clam bait, as well as Gulp tipped leadheads. The best location to catch a few would be at the rock jetty located on the very north end of the canal. There you can park in the parking lot and the jetty is about 100 feet from the lot.

Whether you employ baited rigs or soft baits bounced along the bottom, expect to encounter plenty of sea robins in the canal. Years gone by I would have said we had to deal with them, however, Fisherman subscribers have a great shot at scoring a bird large enough to earn a place on this year’s Dream Boat board. Most of the sea robins in the Shinnecock Canal during May are big females loaded with roe. I have caught my share of huge robins here over the years and saw many brutes caught last season. I am certain that they will again invade the canal this year. The key to nailing a few monster robins for contention is to fish here throughout the month of May, since the size of the birds will drop way off as summer settles in.

Make sure to bring plenty of backup tackle as many jigs, rigs and lures have succumbed to the merciless bottom. My experience has been the closer to the gates I fish, the snags are considerably less. The area south of the railroad trestle to the Montauk Highway Bridge consists of sticky bottom, however, this stretch of terrain often produces the best all round fishing.

You can reach the canal by taking Sunrise Highway to Exit 66 (North Rd., Shinnecock).  Once you come down the ramp, take a left at the Stop Sign, then a right onto Montauk Highway.  Proceed over the bridge overlooking the Canal and make the next two rights and that will bring you to the south end of the Canal with ample parking on either side of the gates.

The month of May produces the best fishing opportunities inside the Shinnecock Canal for shore bound anglers. Therefore whether you are looking for a great day out with the kids or a shot at the Dream Boat, this is the place to be. Don’t miss out. As always, practice self-restraint and obey the regulations. Just as important, don’t forget a long handled net.