Everything you need to know to catch false albacore and green bonito on metals this season.

False albacore (Euthynnus alletteratus), properly named “little tunny,” and their similar cousins, Atlantic bonito (Sarda sarda), pack loads of muscle into their 6- to 15-pound bodies and have a well-deserved reputation for tearing off lengthy, drag-burning runs.

Late each summer, anglers dedicate considerable effort to pursuing albies and bones. Bonito have dark, parallel, horizontal lines along their upper body and are excellent eating, unlike albies’ irregular and worm-like markings and poor eating qualities. Bonito lack the “thumbprint” black spots false albacore show on their bellies. The back of a bonito is a brilliant green—hence its other nickname “green bonito”—and they have large teeth on both jaws, which aren’t present on false albacore. Last, bones have a series of faint vertical bars, somewhat like a yellow perch, down their sides.

Bonito arrive first, usually in the last week of July off New England, several weeks before albies. By the second week of August, they’re around in numbers great enough to target throughout the northeast; they usually peak in late August as albies start invading coastal waters down through Montauk along the South Shore of Long Island and south from Sandy Hook in New Jersey. Although these are pelagic species, they tend to stage in specific areas along the coast each year for days or weeks at a time. And once the word gets out that “the bite is on,” the fish are flailed at by the fleet and become spooked and even more finicky.

The importance of getting on the fish early can’t be overstated if you don’t want to spend hours chasing down unresponsive blitzing pods. A key, therefore, is to be proactive, rather than reactive, and not wait to hear the fish are in—find them yourself. But where to look? 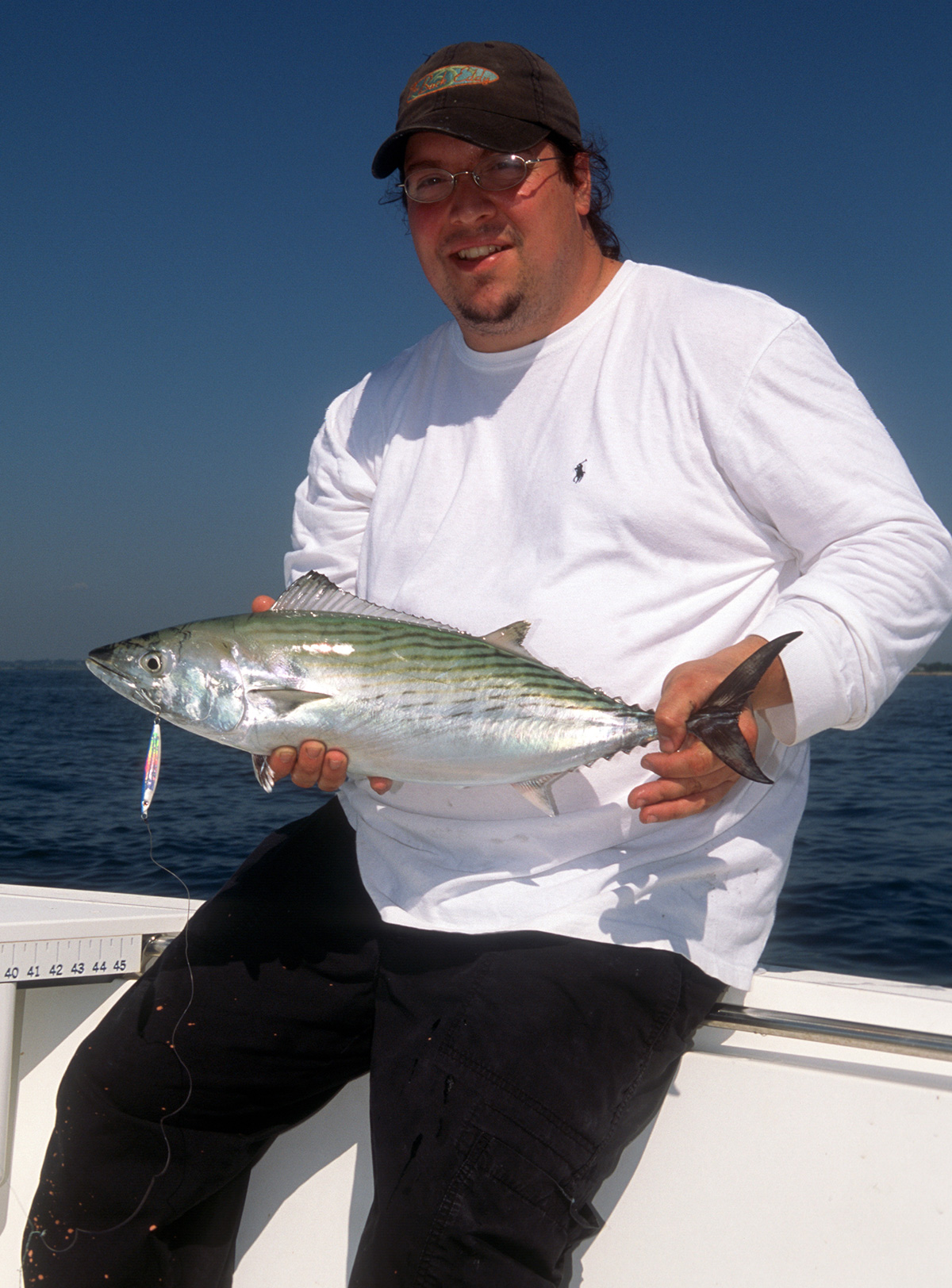 The best approach is to get out early in the day and early in the season. The bite normally turns on after sunrise, and the wind is usually calm, making surface action easier to spot. Most dedicated anglers are willing to burn the fuel necessary to cruise shorelines searching out their own groups of fish, rather than relying on a fleet.

Any areas that attract and hold schools of small baitfish can also attract and hold small tunas. Large reefs that create big rips are primary bonito and albie gathering spots. Breakwalls and rocky points with strong currents are other good places to look, as are most major river mouths, bays, estuaries and islands.

Study the action of terns. When you spot birds hovering, disoriented or flying high in a tracking pattern they’re usually following a tuna school beneath the surface. Once the fish break, the sign of blitzing bonito or albies is a distinctive slashing or racing along the top. Once you locate a pod of breaking fish, your most-likely option is to dash toward the group and make a quick cast or two before it submerges. But as you rapidly approach the frenzy it’s best to cut the engine, staying as far away as possible to not drive them down. Ironically, on some days the fish are so fearless they’ll surface directly behind the boat—sometimes too close to cast to—with the motor running. But this “run-and-gun” technique can be frustrating because bonito and albies have an uncanny knack for vanishing when you approach casting range, only to have another group bust the surface where you just were.

Another method is to drift near working fish, especially effective in a holding area like a rip or harbor entrance. You can continuously blind cast around the boat or just keep rods ready and loaded because, sooner or later, the fish will erupt within casting distance. Some pros even chum active areas with small handfuls of live or dead silversides, hoping to draw the fish in.

When you’re fortunate enough to fire a few casts before the pod darts away, it’s important to cast ahead of the fish, not at or behind them. As soon as the lure hits the water, most experts use a fast retrieve, and this is true—most of the time. But bones and albies often pass on a speedy lure as just one of a thousand hard-to-grab baitfish. If the rapid haul fails, turn the lure into an easy meal by using a slower retrieve with a stop-and-go rod-twitch action so it tumbles like an injured baitfish.

For either species, you still need to “match the hatch” by trying to determine what baitfish the tunas are on, and therefore which lure makes the best presentation. Half-ounce Kastmasters, for example, resemble baby bunker and tiny butterfish. Other good selections are 3/8- to 1/2-ounce Hopkins jigs, Swedish Pimples, Need-L-Eels, Crippled Herring and Yo-Zuri L-Jack jigs. But I have personally found the hands-down most effective albie lure to be the 3/4-ounce Deadly Dick, which imitates a variety of baitfish, including silversides, anchovies and sand eels.

The Deadly Dick Company now also offers “Diamonds,” which aren’t long and skinny but rather are cut from hexagonal bars and are shorter and flatter; thus, more closely resembling butterfish and peanut bunker. These new lures come in 1/8-, 1/4-, 1/2- and 1-ounce sizes. “Based on sales and fishing reports,” said Dave Ross, owner of Deadly Dick lures, “the #1, #2 and #3 Longs were the most popular for small tunas, especially in the dark green model. There are also a lot of needlefish on the East Coast, which is why Deadly Dicks work so well as they match many local species and mimic wounded bait.”

Captain Dixon Merkt says that you’ll need a light-spinning outfit to cast such small lures. He advises using a small but high-capacity reel with a quality drag system and filling it with 12-pound mono or 15-pound superbraid. Attach the reel to a 7- to 7-1/2-foot, medium/light graphite rod with a soft tip but a lot of backbone. For leader material, Merkt favors 12 to 18 inches of 20-pound fluorocarbon because it’s durable and almost invisible.

False albacore and bonito are the ultimate light-tackle challenge in the Northeast. Once you’ve experienced the ripping splashes, working birds and sizzling drags you’ll always look forward to tempting these tiny tunas.