It should come as no surprise to you that I love working the surf, at night, for striped bass; I’ve written about this subject probably more times than all other subjects combined. But in the past 8 or 9 years, blackfishing has steadily climbed up the ladder of my favorite fishing pursuits. And while I don’t see it eclipsing surfcasting for striped bass for me any time soon, I can admit that I have opted out of a good many prime night tides in recent years for a shot at blackfish the next day.

My early attempts to fill a limit of blackfish were not very productive; I simply couldn’t get the hang of the bite and I quickly developed an amazing ability to swing at just the wrong time (in all reality, that hasn’t changed much in the years since.) As was commonplace at the time, I fished a standard hi-low rig with Virginia hooks each baited with a half green crab. I can’t recall for sure, and I’m kind of embarrassed to admit this, but it was probably 2 or maybe even 3 seasons before I landed my first keeper tog on a targeted rig (I did land one on a small piece of squid meant for scup years before.) But despite my general lack of productivity, I stuck with the blackfish and readily accepted the challenge of which is posed by them.

This is where my blackfish evolution finally began to take place as there really was one of those “ah hah” moments with the jig, especially here in the spring. In the fall blackfish tend to strike with a bit more enthusiasm. Perhaps it’s due to increased competition with other species, perhaps it’s due to warmer water temps, perhaps it’s both and more. Whatever the reason, having a more direct link to the bait proved to be far more productive for me in the spring as it allows me to really feel what is going on down below. Building on this concept, the jigs I can and often do fish weigh as little as ½ ounce with a couple jigs in my kit going even lighter for really finicky bites and the slowest of current flows. Gone are sinkers of 4, 6 or even 10-plus ounces for this guy in the spring!

The style, shape and color of jigs are hotly-debated, and I have come up with some general rules that I follow. Note that these are not written in stone, but instead a very-erasable pencil at best, so do not take them as gospel.

Color doesn’t always matter, but when it does it really pays to have a variety of options to present. I usually start the day with what worked best on my last trip, and go from there switching to extremes (bright orange to dark green, unpainted to bright white or glow) and see if my results change. I often ask myself if the change in jig produced the bites, or if the fish simply decided to feed for some reason and the change was a coincidence, but I can only control certain variables so those are what I stick with.

Hooks can really make a difference in hook-up ratio, especially when taking bait into consideration. Hands-down, I prefer a jig that presents the hook and subsequently the bait up and away from the rock. I want it to be as easy as possible for the blackfish to suck in the crab, and this leads me to the next part in jig selection: hook size. I want the hook to walk the Goldilocks line of being big enough for the point to be just barely be exposed from the bait, but with the gap still being large enough to hold the crab and not be overwhelming to the bait. I am not so worried that a big hook looks unnatural—the big hunk of lead a few millimeters away trumps that fear—I simply find that when using a hook better sized to the bait that I have greater success. This means that when I fish smaller Asian crabs, I want a smaller jig hook, and conversely, when using larger baits like cut or whole greens I can get away with bigger hooks. Deep down I firmly believe that this is why certain regions of the coast are so supportive of a specific jig; to me, it’s not the idea that a given jig is all that much better than its competition, it just so happens to fish best with the locally-preferred bait.

I have been told by many anglers over the years that you need to use soft baits for blackfish in the spring. The theory goes something along the lines of a blackfish doesn’t feed on crabs all winter long so its teeth turn soft and they can’t crunch a crab until they harden back up. Wait, what?!?!?! I call bologna here and to me, it’s just an excuse used to explain why anglers got skunked, and it evolved over the years to become legend. Further, anecdotal evidence proves otherwise as I have both caught plenty of spring blackfish on crabs and never once caught a blackfish with “soft” teeth.

What I feel is more at work here is that there are fewer bait stealers on the blackfish structure in the spring than in the summer and fall so it’s easier to fish a soft bait in the spring without it getting stolen by non-target species. Do soft baits work in the spring? Yes, by all means, but they’re not the only option. My primary spring bait is the Asian crab, followed by cut green crabs. From there I will add in sandworms, clams and mussels if available, but overall I have never found them to be all that much better than crabs.

Spring blackfishing for me is always in shallow water, the shallowest I can safely fish either by boat or kayak, but there remains the opportunity at a giant fish so while lighter gear often produces more fish, too light of gear must be avoided. I will say that in general, I fish spinning gear in the spring as at times I fish jigs as light as ½ of an ounce, and this simply doesn’t work (for me) on conventional tackle. I pack two or three rods for an average trip and each is rigged with different weight jigs so I can switch up at a moment’s notice. That’s one thing which is extremely important in spring blackfishing: the best bite is often very short-lived so you need to be ready to maximize the success.

My first rod is the lightest, and it’s a Tsunami Carbon Shield II rated for 1/8- to 1-ounce lures. This is what many would consider a spring schoolie bass or albie rod, but I’ve landed blackfish to 9-plus pounds on my kayak with it. I have also lost a couple of bruisers that I simply couldn’t turn, so be warned. Similar rods include the Star Stellar Lite SG817FT76G and the G-Loomis IMX-Pro Blue model 843S-F. Next up is a middle of the road rod that’s rated for weights from ¾ to about 1.5 ounces. I have an older Daiwa Saltiga Inshore rod (now discontinued) that fits this slot well. It is rated for ¼- to 1-ounce weights, but I find it handles jigs over ¾ best with a top end of 2 ounces. In a pinch, this rod is ok for lighter jigs, but it is physically heavy in the hand so it doesn’t seem to have the same feel on the light stuff. Last up is my heaviest rod, but it can handle the light stuff as well. I actually have two rods that fit this bill well, and they are both part of the Maxel Slow Pitch series: models 661MH and 701H. I really, really like these rods for togging and in all reality could probably get away with having just this pair, but I also like to have lots of toys so my rod arsenal continues to grow.

As noted earlier, I prefer spinning reels for spring tog, and there are plenty of reels on the market to match up with the above-noted rods. My absolute favorite reel for togging is the Daiwa Saltiga BJ4000, but it really only balances well on my medium and heavy spring rods. I find that a balanced combo, and by balanced I mean it not only matches up well but physically balances on or around the point of which your hand grips the rod, aids greatly in feeling the sometimes subtle take of a spring tog in shallow water. So on the light and medium rods I swap in and out a few reels including the Shimano Stradic C5000XG, PENN Spinfisher VI 3500 and Tsunami Evict in the 3000 and 4000 classes. The Tsunami SaltX 4000 is another great in-between reel that will do double-duty across several rods weights. Above all, you want a quality reel with a smooth drag and strong gears that can stand up to the abuse of hard-fighting tog and keep them from taking you back down into their lair.

All of my blackfish spinning reels are spooled with 20- to 30-pound braided lines, and to the end of the braid I tie a section of monofilament or fluorocarbon (I find little difference in success for one over the other) attached by way of an FG knot. An improved Albright or Alberto knot will also work, but I often use a longer leader on the lighter lines and the FG knot provides a much smoother transition which is less likely to hang on tiny guides. At the very least I run a 3-foot leader and go on up to about 6-feet long or so. I want my leader to be long enough to protect the braid from coming into direct contact with structure, but at the same time in shallow water I don’t want it to be so long that it defeats the purpose of fishing braid in the first place—this is not the place to be using long mono top shots!

The last piece of information that will aid in connecting with spring tog relates to water temperatures. I seek out shallow water as previously noted, and greatly prefer breakwalls and areas where the rocks are exposed or nearly exposed at low water, especially when those rocks are dark colored. When fishing these spots on an incoming tide, after the sun has had some time to bake and warm them, the surrounding water temperature will rise—if even only by a degree or two—and often this is just enough to turn on the bite.

So now that spring has finally sprung, and blackfish season is or is almost upon us depending upon where you live, consider heading to your local jetty wall or shallow-water rockpile for a shot at tangling with the first bruiser tog of the season. 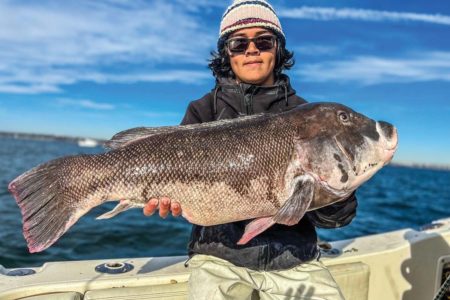