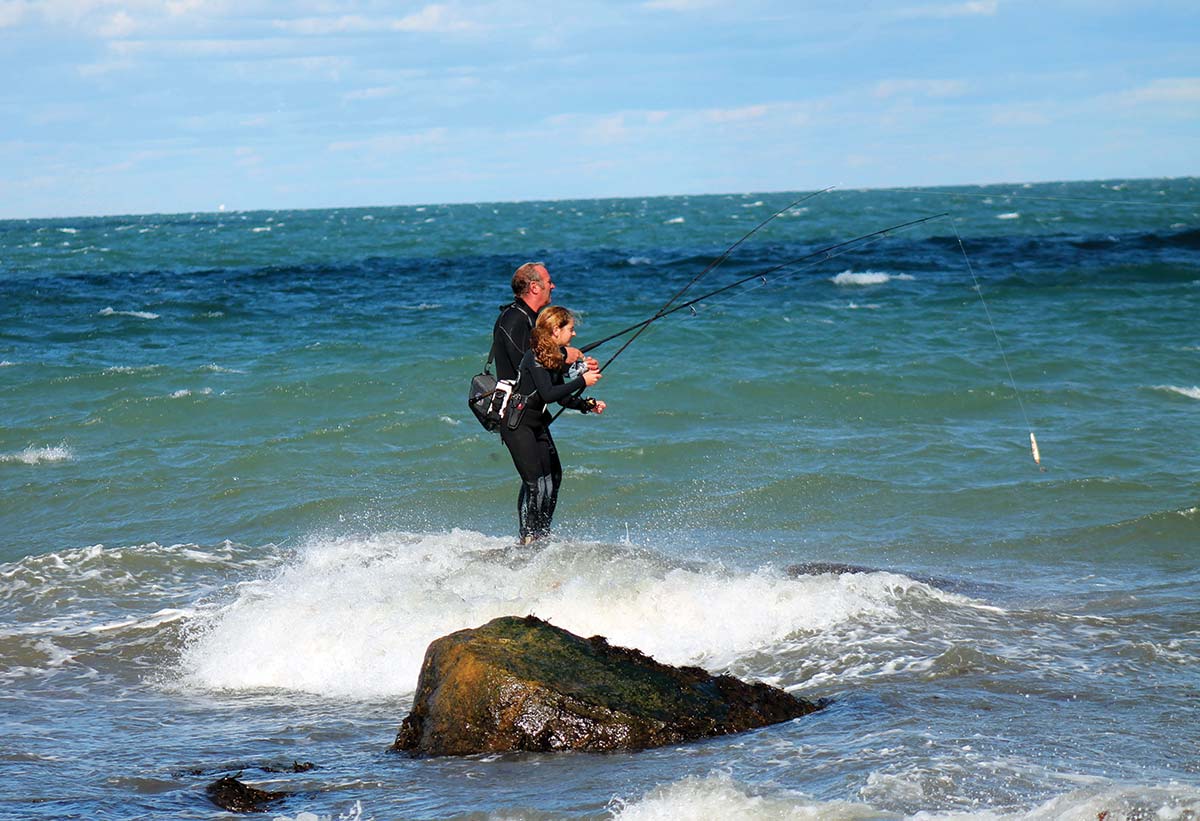 We moved from Astoria in 1953 to a little community on the North Shore between Wildwood State Park and Baiting Hollow in New York. My father and uncle, both New York City firemen, expanded small cottages they had built so both their families could live in them year-round. It was a young boy’s paradise.  At the end of a dead end road was a private beach that bordered Wildwood Park and held wonders waiting to be explored. Mussels to be pulled from the rocks, blowfish, blackfish and porgies easily caught from the beach. A rowboat distance from shore flounder and fluke were plentiful.

As I grew older I got to accompany my dad and uncle on night trips to the rocky beach for striped bass. Many nights we carried bass in the 15- to 25-pound class up a 100-step flight of stairs, while the smaller fish were set free. I was with my uncle the stormy night he landed a 42-pound bass. Perhaps not big by today’s standards or those of Block Island or Cuttyhunk, but a fish large enough to get the attention of the local news sports column. This was night fishing with big blue Atoms and later the junior version.

When I turned 12, I joined my uncle George on a two-day trip to Montauk.  On the way we stopped at an army-navy surplus store to buy me a parka so I could look like a fisherman, at least from the waist up. On the rack were two canvas parkas still bearing the names of previous G.I. owners, Karskey and O’Brian; they were such a good price my uncle bought them both. And so, that summer of 1961 my uncle was Karskey and I became O’Brian to my uncle’s fishing buddies Felix, Mukoska, Fred Perl and others. They took me in when they realized I could cast and knew my way around a Penn Squidder. We trekked the beaches to calls of “Hey O’Brian where’s Karskey?” and vice versa.

When we reached Evans Rock at low tide, my uncle would hoist me to his shoulders and wade out to the rock. He had his own rock a little to the right. Immediately, bluefish were crashing Striper Swipers on every cast – I was in paradise. On one occasion I had a blue crash my plug ten feet from the rock but it missed the lure. On another occasion we trekked to Stepping Stones on a hot day with not a bird in the sky and the ocean as calm as the proverbial lake, but my uncle had a feeling based on tides, currents and stuff a 13-year-old could not yet imagine. We spent the entire day catching blues on every cast and I was worn down. My uncle was a fireman and wasn’t the type to wear out easily.

We would often stop at Jeskies Fish Market on the way home to peddle our catch just to hear the same sob story; “Don’t need them but I’ll take them off your hands for 15 cents a pound.”  But on this particular day with over 100 pounds of fish in our coolers my uncle saw there were no blues in the display case, asking “Where’s the blues?” Mr. Jeskie replied, “None to be found – nobody is catching.”   So Uncle George said, “We have a few, what can you pay?” When Mr. Jeskie offered 25 cents a pound, my uncle said we would try our luck at the other place.  The fish monger quickly upped his offer to 35 cents and we carted in three coolers of fish to be sold.  At 13, I could do math; this was over 40 dollars to split. I could make a living doing what I loved, but school and other things got in the way and it never happened.

On one of the last trips I remember with my uncle, we stopped at a tackle shop on the corner where we met a guy with coffee in hand. “Where’s the fish Johnny?” my uncle asked. “They’re in the ocean, where the hell do you think they are George?”  Such was my introduction to Johnny Kronuch, Sr.

Soon after my uncle bought his first spinning reel, a Luxor that I still fish with, he took it to the beach at Hither Hills but could not figure out how to use it. I however, fished freshwater with a Mitchell 300. “You have to hold the line next to the spool to cast,” I told him. On the next trip to the Point we heard “Hey O’Brian, heard you had to teach Karskey how to fish with a Luxor.” Small payback for all that he had taught me. My reward was an 11-1/2-foot Supercutter that he built with a Luxor taped to the blank. I live in upstate New York now for reasons that don’t make sense to a 72-year-old.

I still make the yearly pilgrimage to Montauk, but it’s not the same. Maybe it never was. I can’t fish the lighthouse anymore and never got into a wetsuit. I did enjoy a simpler, kinder time and can still stand near the rocks where legends left their Korker scratches. On my yearly trip to Montauk, I drive to the North Bar and take the walk to Evans Rock. In my mind there is a 13-year-old kid perched on it, silhouetted against blue sky and ocean while casting for bluefish.