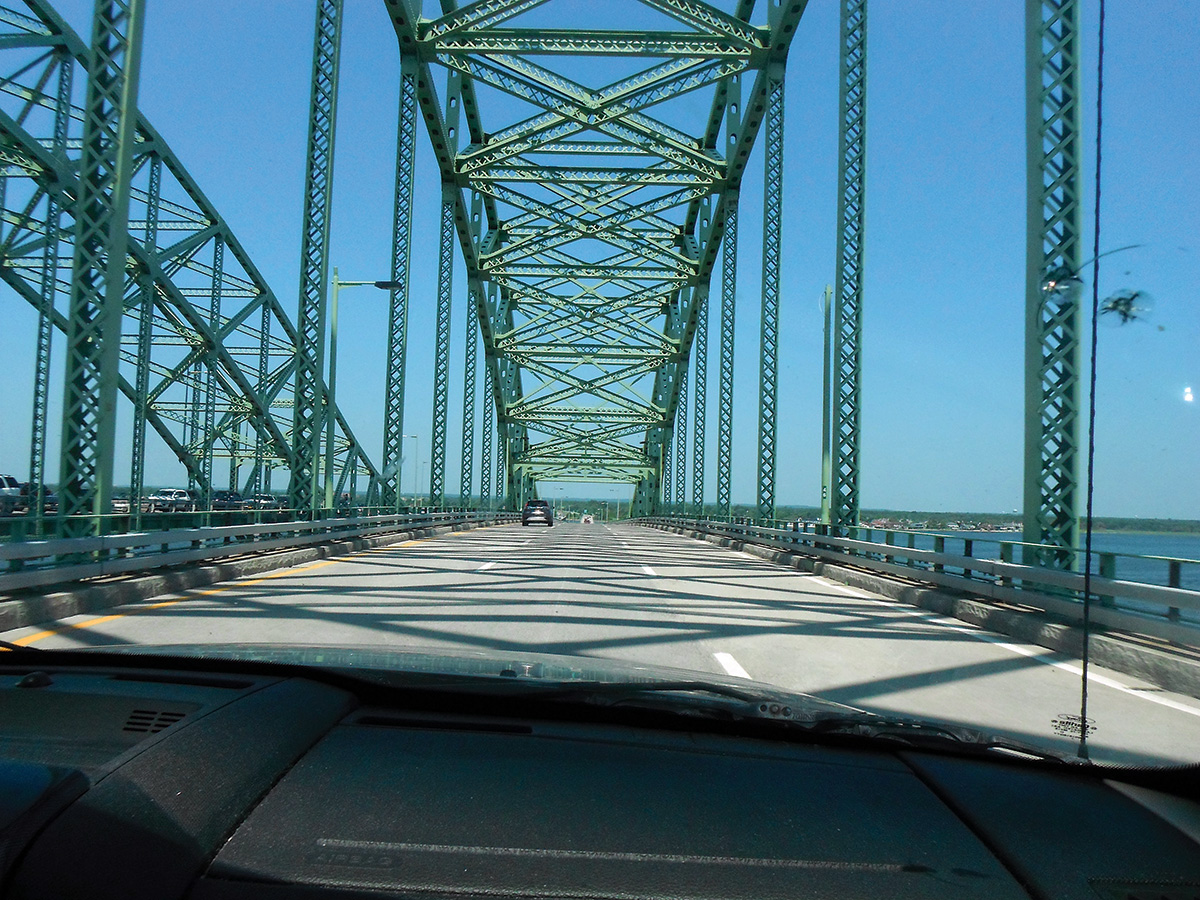 I can think of a few reasons why maybe I should avoid bridges whenever possible, and in particular the Captree Bridge that spans Long Island’s Great South Bay. The two mile long structure, the second longest bridge in New York State after the Tappan Zee, has not been good to me over the years. I have crossed this bridge an unaccountable number of times since childhood so I guess there have been plenty of opportunities for things to go wrong.

One morning, I was crossing the bridge in the pre-dawn darkness – tooling along at about 55 in the right lane of the two-lane southbound structure enroute to meet a charter client at Captree. There was some work being done to the bridge at the time and a long stretch of roadway lights were out. What I didn’t know was that a woman’s car had stalled in the right lane. Not sure what she was thinking, but on the darkened bridge, she left the car without turning on her emergency flasher, or any other light for that matter. Suddenly out of the darkness looms this “parked” car. With a pickup truck pacing me in the left lane there was little to do but stand up on the brake pedal. As the pickup passed me I was able to avoid hitting the car full on, instead catching the left side of the rear end, which propelled me into the left lane where I then proceeded to do a pair of 360s. I remember wondering how strong those guard rails were as images of flying off the bridge whirled around in my head. Scratch one charter and one full size Ford Bronco.

One evening, I had the family with me on the way to Democrat Point to do some fishing and dinner on the beach. As we approached the apex of the bridge, I noticed the 162-quart cooler in my truck’s front cooler rack beginning to shimmy and vibrate from side to side. Next, it began to rise from the rack in slow motion as if some unearthly power had taken control of the oversized Coleman. It continued to rise, but stopping short was not an option with cars trailing close behind. I slowed as best I could but it was not enough. Half out of the rack, it suddenly went airborne, shooting straight up and then over the roof of my truck. By some miracle, the cooler missed the car behind me, instead smashing into the metal plated curb, which left quite an imprint but did not crack the cooler. At the time, I thought what better testimony to the toughness and durability of Coleman Coolers? Oh, and yes – I had forgotten to strap the cooler down.

The biggest miracle was that somehow, the flying Coleman made it over the roof without taking off the tip sections of the four 10- to 11-foot surf rods poking out over the hood from my roof rack. Somehow, the cooler went straight up, and with enough height to clear all of the rods. That cooler was still in use 10 years later.

Then there were those sunglasses. The best sunglasses I ever owned. Two Manhattan optometrists, who also shared a love of fishing, set out to develop the best fishing sunglasses ever made. They appeared to have accomplished their mission because the pair they sent me to field test were the lightest and clearest sunglasses I had worn at that point in time. And lest I forget, they retailed for around $400. Over a two week span, I was constantly forgetting that I was wearing them – that’s how light and comfortable they were. They very well might have been the best sunglasses ever made.

Back up on the bridge another time, I was heading home from a fishing trip on the northbound span when I heard a horn beeping from a vehicle on the southbound structure. As the vehicle passed, I stuck my head out the window to see who it was, and yep – you guessed it. The wind caught those super lightweight glasses and they shot off of my face, never to be seen again, their pieces clearly visible in the rear-view mirror. I did not believe in using retainers or safety cords back then, but you can bet I’ve used them ever since.