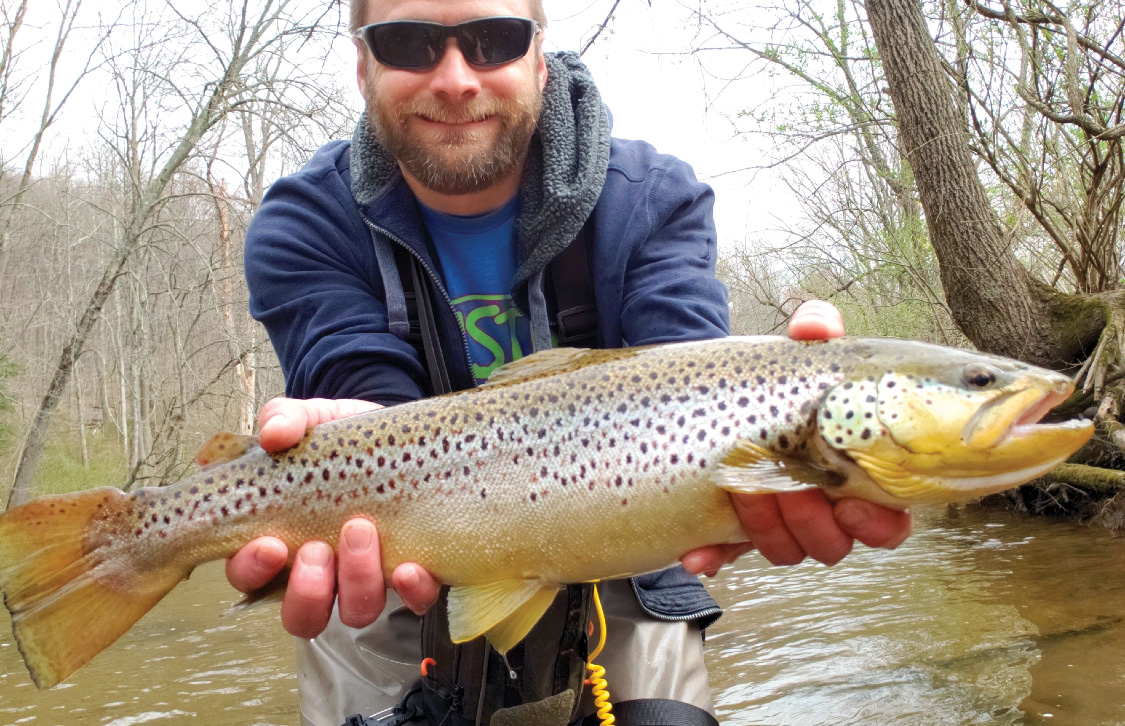 In 1983, two years before I was born, my parents decided to start camping in upstate New York on the banks of the East Branch of the Delaware River. For my father who grew up fishing in Paterson, NJ this land was a mecca—miles of streams loaded with big fish, not many posted areas, and barely any fishing pressure. To compare it to typical New Jersey fishing was like going from the dessert to an oasis.

Fast forward a few years to when I was born; my parents upgraded to a trailer that we had in that same camp ground until 2004. During that time we spent almost every weekend, holiday, and vacation of the summer up here. My parents always took vacation right at the middle or end of August depending on when my school year started. So for years we were up there during some of the hottest days of the summer.

That didn’t stop of us from fishing though, and over the years it was the time I saw the biggest trout caught in my life. In fact after my parents sold the trailer, I always made it a point to watch the river gauges (thank you Internet) and look for certain conditions that historically were good to me over the years. The methods that my family and friends used were just as successful back then as they are today.

It started as a joke. My godfather, Anthony Bevalaqua, was the first of my dad’s friends to find this oasis in the heart of the Catskills. He would come back and tell my father stories of these huge natural trout and miles of river.

Being someone who could never turn down a fishing or hunting adventure my father decided to go up. When they got up to the river the bait of choice perplexed my father. It was a three-hook floating black and gold Rapala. My father, who was used to catching Jersey’s stocked trout on worms and spinners, found this very odd. Being able to use bait as big as the fish he catches just didn’t seem possible; but his best friend wouldn’t point him in the wrong direction, would he?

For the first time out on the river my father wasn’t having much success while he watched my godfather land a few fish. He then remembered my mother had bought him this specific lure that he had never tried before. For a gift my mother was shopping at a local sporting goods store, and as a joke she bought my father this lure that looks like nothing else in nature, and probably wouldn’t catch anything. The lure was a three-hook chartreuse green and silver Rapala. The best way to describe how this lure looks in the water is try to imagine a praying mantis swimming like a torpedo.

Being that it was getting to the time where they would go get breakfast and he was having limited success he decided to give it a shot. Around five casts later he felt a thump; not like trout, but more like a bluefish in saltwater. The rest is history. As I got older I learned how he fished it and I did my own research to perfect a method that has not failed me for over 15 years.

The one thing people tend to forget amongst the miles of some of the most pristine trout country on the planet is this; those rivers are not there for the fishery. The river is there for drinking water for the residents of New York City. The fishery is a bi-product; however great it is, fishing is not the number one purpose for this body of water. However, because of that need for water, in the hottest days of August when the residents of New York City’s water consumption is at its highest it means one thing; they need more water. “So what do they do,” you might ask. Well, they release water from the reservoir.

The West Branch of the Delaware River headwaters come from the Pepacton Reservoir, and the release is a cold-water discharge from the bottom of the dam. With this it brings many things: baitfish, aquatic insects, bone chilling cold water, and a lot of moss. Most guides, lodges, and even locals will tell you not to fish it because it is too high and too cold – more importantly they will say it is too dangerous. Which brings me to my next point; before fishing the way I am about to describe make sure you fish in the daylight first. This way you can learn the contour of the river and see where the normal holes, drop-offs, rock ledges and aquifers are.

The spots I like to concentrate most on are Deposit, Hale Eddy and Balls Eddy. These all have public access that is relatively easy to find, and all hold good numbers of big fish. The gear I currently use consists of a 7-foot medium-light action St. Croix Tidemaster with a PENN Battle reel spooled with 10-pound braid. Depending on water clarity and conditions I use a fluorocarbon leader of either 4- or 6-pound test. While some people will only tie on about 3 feet when fishing a fluorocarbon leader and attach a snap swivel or clip, I tie on extra fluoro with an Albright knot since I sometimes change lures frequently. Others may not go to such extent, but I find that when using a swivel or snap I do not catch nearly as many fish. It doesn’t mean you won’t catch any, but for me I have done better tying directly to the lure.

My lure of choice is a three-hook chartreuse green and silver Rapala. I replace the treble hooks with single hooks for an easier release, and honestly when a fish hits a treble hook it can ruin the fight and harm the fish. Other lures I have been successful with are Krocodiles, large Phoebes, and black 1/8-ounce marabou jigs.

The two best times are right at sunset and right at daybreak. Because of the hot air temperature and very cold water (sometimes as cold as the high 40s when the water is running) there is luminous fog on the water. It is kind of creepy and beautiful all at the same time. When the water is high, and because I know the river, I hug close to the bank. This is the reason I use braid for this application because I am able to cast much further from a safer location. Using a spool with Berkley Vanish also works, but it’s all-personal preference.

I like to throw the Rapala either upstream or directly in front of me. Nine out of 10 times I usually fish it downstream because you can suspend the lure and get fish to make reaction strikes, almost like mimicking a trolling motion. However when the water is being released from the dam there is usually a ton of moss floating in the water. Fishing it either parallel or downstream gives you less of a chance to get hung up in this.

I like to concentrate on areas where fast water meets slower water and creates an eddy-like water column. Much like humans, big trout are a creature of opportunity. They position themselves where it is easier to ambush prey. Toss the lure into the fast water and reel until it gets to where the two waters meet. Once it is about to hit the slow water, start twitching the Rapala and let it float towards the surface. This method delivers some of the most violent strikes I have ever felt in either fresh or saltwater. Sometimes in the early mornings, they almost pull the rod out of your hands!

Some people may say fishing like this is cheating, because it’s not on the fly; others might see it more like hunting fenced in property. To that I have this to say: it is in season and follows the rules that the state has put in place. Also 90 percent of a trout’s diet is small, brown aquatic bugs. Catching a fish on what they eat regularly doesn’t impress me that much.

I also fly fish very frequently, but sometimes the elitist attitude you receive from people you meet on the river can be off-putting. I always try to be as polite and helpful especially to people that have never fished the river system before. I never know what kind of new friend I can meet, and maybe with what I helped that person learn, they can make a memory on the same river that has provided me with a lifetime of memories.

Mark Mercer is a lifelong trout fisherman currently living in Bergen County, NJ.
You can usually find him fishing fresh or saltwater in the New York
Metropolitan area, tending to the garden that his wife plants, or
helping run a commercial bakery in Rockland County, NY.