Take the concept of reverse surfcasting to the next level with the aid of electronics and trolling motors.

I have long said that when the day comes that I can no longer fish in the surf in the ways that I do today, that I’d like to fish those very same locations only I’d like to make the casts into shore from a boat as opposed to out towards the horizon. This concept is loosely referred to as “reverse surfcasting,” although being successful at it involves more than just casting back at the shore.

The concept isn’t really all that new, but as with most things fishing tight to shore for striped bass has benefited from some major modern advancements in recent years. Looking back at some of the old-timey photos of guys casting big plugs off wooden Cuttyhunk boats into the rocky shores of the Elizabeth Islands in Massachusetts, often times they were seen doing so with a Penn Squidder spooled with linen line and mounted on a 9- or 10-foot fiberglass rod. The gear was heavy as it was necessary to not only cast and work the big plugs, but also to subdue the large striped bass and bluefish that they sought. Nowadays you’re not likely to find many if any rods of this style still being employed. In their place it is far more common to see rods 6 to 8 feet long matched up with 3000- to 5000-class spinning reels and spooled with 20- to 40-pound braid. Top off the braid with a swivel, fluorocarbon leader and snap or hook, and you’re ready to do battle with cow bass and slammer blues.

Additional advancements that directly benefit this style of fishing include electronics and trolling motors. In the last year we have shown Northeast saltwater anglers how beneficial a trolling motor can be when targeting bottomfish on a reef and striped bass in a rip line or hard-running current, but some of these same benefits can be seen by the near-shore boater. Where past outings working in the shallows from a boat would often call for one angler to cast while the other manned the controls, always at the ready to back out into deeper water at the first sign of danger, with remote-controlled trolling motors both casters can now work the same shoreline in relative safety. The boat can be “anchored” in place with a simple click of a button, and when a fish is hooked that needs to be pulled from the rocks, most of these trolling motors offer a feature that allows the boat to be adjusted in pre-determined increments; again, all from the convenience of a remote control hanging off the angler’s neck.

Electronics, specifically side-imaging technology, too has opened up a whole new world of insight for the near-shore boat angler. With the clarity delivered on units equipped with side-scanning ability, it is actually possible to cruise along some fishy-looking shoreline, while keeping an eye to the display, and pinpoint schools of gamefish and/or baitfish in shallow water that previously could not be seen without running them over and most likely spooking with the boat. So often is the case in this shallow-water fishing that large schools of striped bass are found on dark nights simply resting or slowly cruising just below the water’s surface. While sometimes these fish make their presence known by striking lures or baits cast to shore, more often than not the water erupts, much to the surprise of the angler, when the boat’s motor is either started up or kicked into gear to move onto other spots. If the angler in question had side-imaging electronics, he would have likely known those fish were present.

Reverse surfcasting can be applied up and down the coast and can easily be adapted wherever stripers roam the shallows, perhaps even a tactic to work that stretch of pristine shoreline that is otherwise inaccessible to the shore-bound angler. It is effective along the rocky beaches found throughout New England and the North Shore of Long Island, and it is a good way to work the bunker schools running the South Shore of Long Island and on down the Jersey Shore as large bass and bluefish pin them against the jetties and sandbars that dot these sandy beaches.

I recently took a trip with Capt. Mike Roy of Reel Cast Charters in Eastern Long Island Sound. Our game plan was to work some rocky shoreline with plugs prior to dark, and then switch to live eels after the sun set. On our way from the boat launch to the first stop, we discussed the technique of reverse surfcasting. First up, Capt. Mike began by clarifying for me that it is far more than just motoring along the shore and casting in towards dry land. While in some cases he begins looking for structure with the same eye that he used in his days working the surf, by boat he takes it a step further. “Sure I might work the same type of spots that I used to target in waders or a wetsuit—rocky points and bowls—but from my boat I am able to further dissect which spots are worth spending time in and which ones are just worthy of a few casts. I keep an eye to my Humminbird Solix 12 as I slowly motor along, looking for signs of bait, fish and changes in bottom structure. At times I can actually pinpoint individual fish off to one side or the other and direct my clients to cast to them. When fish are not showing, schools of bait like adult bunker can be seen, and I can then target those areas.”

Arriving at the first stop, we slowly motored along looking for signs of life. A few boats were already on site and casting in the general area, but no one seemed to be catching much aside from a fish here or there. Capt. Mike spotted some bait with the Mega Side Imaging, so we moved up-tide of the marks and began drifting—he tossed a Doc spook while his client, Jim Luce, worked an Albie Snax. With primarily large bait in the area and showing on the electronics, Mike was first to strike with a teen bass, followed by one of 30 pounds. We motored back up-tide and began casting again. As the drift approached the same area as the previous hook-ups, Capt. Mike engaged the Spot Lock feature on his Minn Kota Riptide Ulterra and held the 21-foot Steiger Craft center console on the mark. Both captain and client landed several more bass from 10 to 30 pounds, as well as a low-teen bluefish, before the school moved off. We continued to work the shoreline, stopping when signs of life were seen and holding the boat in place with the aid of the trolling motor until it was time to change over to live eels.

The plug bite seemed to die out with the last glimmer of sun on the Western horizon, so Capt. Mike made a move east to a spot where he had caught some large bass the prior few nights. Much like before dark, we approached a likely area and began to scan for life on the electronics, easing in close enough to shore that we were well-within range of an average surfcaster. This is probably a good spot to remind you that if there are surfcasters working a shoreline, it is not a good idea to crowd in on them. While some might only respond with a flash from their light or a few words of encouragement, others might not be so forgiving. Common courtesy dictates that the first angler on the scene—whether by boat or from shore—should be given space.

The first rocky point didn’t show any signs of life, and several well-placed eels confirmed what the Humminbird displayed. The second stop—another fishy point on the edge of a large bowl—was also devoid of any takers. This is a spot that I would have likely spent a substantial amount of time working had I been fishing from shore. It had many of the ingredients that usually produce success for the surfcaster: current, depth change and a little bit of white water. This is a scenario when the boater has an advantage as they can see that there are no fish in residence at this time and make a move to another spot, perhaps to return later in the tide to see if any fish arrived in the interim.

Upon arrival at the third spot—a soft point that I would likely pay little attention to if I was working the surf—was a spot Capt. Mike said regularly produces some very large striped bass for him. “This spot doesn’t look like much from shore, but it is a prime example of how the concept of ‘reverse surfcasting’ was just the beginning idea of which I now take several steps further when working a shoreline from my boat. While not terribly apparent from the shore—unless you refer to a chart—the point continues a ways out into the ocean, and the bottom is made up of mixed rock and mussels. The surrounding bottom tapers off on both sides and provides a break in the down-shore current as well as a spot that attracts small bottom-feeders like scup, sea bass, choggies and the like—all prime forage for striped bass. There are some small to medium size rocks on both slopes, and when you can drop a live eel directly on these rocks you are almost guaranteed a fish. Again, this is where my electronics provide me an advantage over the days of essentially blind-casting from the surf.”

This led me to another point of discussion. I am almost happy at times not to have the aid of electronics when casting from the shore on nights when I get skunked. If no fish are showing, then I tell myself that the fish simply were not there for whatever reason and I can move on to another spot feeling rather confident that I didn’t do anything wrong. Having been a convert from surf to boat, I asked Capt. Mike if he felt it was better to know there are fish present but unwilling to feed, or if he liked the ignorant bliss associated with the electronics-free surfcaster. He responded in a classic “the glass is half-full” kind of way by saying, “If I am marking a lot of fish, but they are not reacting positively, I tweak my presentation by changing lures, altering retrieve cadence and so-on. At least if I know there are fish present, I feel that I am half-way to finding success and it’s just a matter of time before I am able to decipher what they want at that moment.” 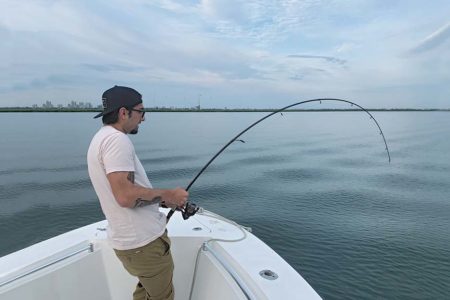 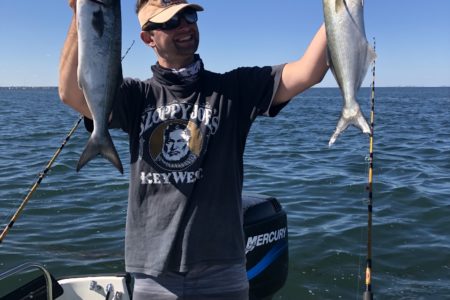