Chunking is one of the most effective ways to connect with big stripers and blues in the fall surf.

At first glance, chunking seems to be simple in its approach. Buy some bait, usually bunker, slice it into chunks to fit onto the hook, and cast it out in hopes that a trophy striper or blue will come along and make a quick snack of it. In reality, there are reasons why some folks consistently out-fish everyone else on the beach in the chunking game.

Having the proper bait is a good place to start. The most successful chunkers are fastidious about the quality of their bait. Sure, we have all heard stories of that 50-pounder caught on an old, frozen chunk of bunker, but catches like that are rare exceptions. Catching your own bait the same day is the ultimate solution to fresh bait, and with the recent abundance of bunker in our region the past few years, many casters have been able to cast net or snag their own supply of bait in local bays or harbors. That same abundance has enabled tackle shops to keep a fresh supply on hand, and some shops actually take deliveries of fresh bunker on a daily basis during the height of the season. The bunker should be firm, bright and silvery, with clear eyes. Some shops might get them fresh but how they store and care for the baitfish can make a big difference. Stay away from bunker with red eyes and soft bellies. Once you have your bait, it’s up to you to keep it fresh. Placetwo or three bunker in a gallon-sized Ziploc bag and alternate layers of ice and bags of bunker until they’re all covered in ice.

While bunker are the overwhelming choice of most bait fishermen when chunking along the Striper Coast, it should be noted that other baits sometimes out-fish the oily menhaden. Big bass and blues love porgies, and scup are super abundant along some parts of the coast this season. In some areas it is possible to toss out a worm- or clam-baited hook and catch some porgies in the same area you are targeting stripers and blues.

We’ve found that the biggest kind of blues have a special fondness for a fresh porgy chunk. Mackerel chunks are another prime bait for bass and blues, and for those of you targeting sharks in the surf, mackerel often out-fishes bunker. Don’t overlook herring if the opportunity to catch your own presents itself. They also make great chunk baits.

The first thing I do is cut off the head a little bit behind the pectoral fins, leaving some of the guts intact. When cutting chunks along the body, I vary the thickness from 1/2 inch to 1 inch, depending on the size of the bunker, the size of the fish currently being caught from the area, and whether or not casting distance is a factor in the area I’m fishing. A very sharp knife is a must have to make nice clean cuts. I’ve found a boning knife is the best choice for the job.

It is well established that big stripers display a fondness for heads. Many big stripers have fallen to bunker heads yet some surf fishermen shy away from these prime baits, preferring instead the meatier mid sections. The fact is both baits produce, and the fish might prefer one over the other at any given time. The bottom line – use both the head and body chunks. I get rid of the tail since the shape makes the bait wind resistant and difficult to cast. Also I’ve seen very few fish caught on baits with the tail intact, unless you are talking about a whole baitfish. Depending on the size of the bunker you are using, the front or head section of a bunker cut diagonally in half makes for a very effective big bass bait. However you cut your baits, cut them up as needed and keep the rest on ice while you are fishing. This is especially important when fishing during warm weather periods.

A fish-finder rig is far and away the most popular way to present a chunk bait. It allows a fish to move off with your bait without feeling the weight of your sinker, which remains in place on the bottom. Rigging is simple: Slip the fish-finder (sinker slide) onto your main line and tie a barrel swivel to the end of your line. Your leader is then attached to the bottom of the barrel swivel. If stripers are your primary target, 40- or 50-pound fluorocarbon leader material are good choices. Eighteen inches is the maximum length I would go. The longer your leader, the more difficult casting becomes, and the more likely it is to tangle. For rough surf conditions or in fast current, you want to keep your leader as short as possible to avoid your bait spinning and tangling, dropping down to as little as 8or 10inches. If you are targeting blues or if you are being bitten off by blues, a 6-inch trace of wire at the end of your leader is a smart choice. If there are big bass among the blues, sacrificing some bite-offs to blues might make staying with just the fluorocarbon worth it for the more leader shy stripers. To the end of the leader, I attach an 8/0 to 10/0 circle hook. Be sure to clear the hook point of any scales picked up while baiting your hook. 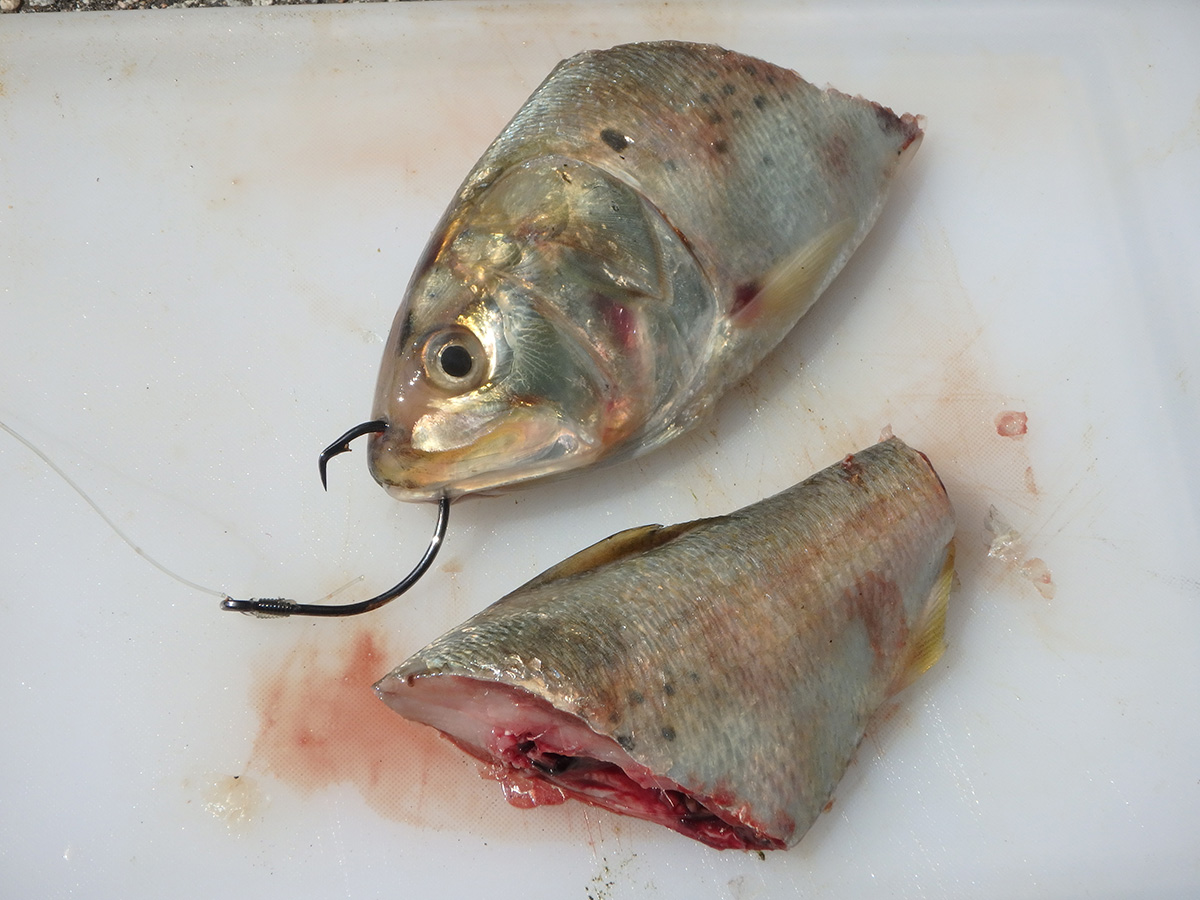 When it comes to holding bottom, you should carry a selection of weights ranging from 3 to 10 ounces, depending on surf conditions or current. All sinkers are not created equal.  The pyramid sinker is a good all-around choice – it holds pretty well in sand or mud bottoms, but is easily dislodged and can roll in rough surf or fast current. Hatteras-style sinkers get a good foothold into sandy bottoms, but for the best hold in sand, I turn to wedge-style sinkers. They dig into the sand, and the concave top keeps them from pulling. On mud bottoms in rivers or bays, a bank sinker is sufficient to anchor your rig to the bottom.

There is another aspect to the chunking game that can be applied in calm water areas and where rough bottom makes fishing a sinker impractical. Casting unweighted chunks does not require the same heavy gear used under most chunking conditions and it can be very effective when fish are shying away from plugs and other artificials. In shallow, rocky areas, some casters have even turned to adding a large float to keep the chunk from getting hung up on the shallow bottom.

To Hold or Not

The most successful chunkers hold their rod rather than place it in a sand spike and watch their rod tip from the comfort of their truck or a beach chair. There are times when the bite from even the biggest blue or striper is hardly detectable unless you are holding your rod. These gentle hits usually require feeding some line to the fish as they are often less aggressive and require some finesse to get them to take your bait. Of course, many casters favor spiking their rod, and they catch more than their share of fish over the course of a season, but by not holding your rod, you may very well miss some big fish opportunities.

Chunking is especially effective in the summer and fall, but produces all season long. Bait generally has the edge over lures when water temperatures are high in mid-summer and colder late in the fall. Becoming adept at the chunking game is a great way to expand your arsenal and keep you in fish when bait seems to be the only game in town.