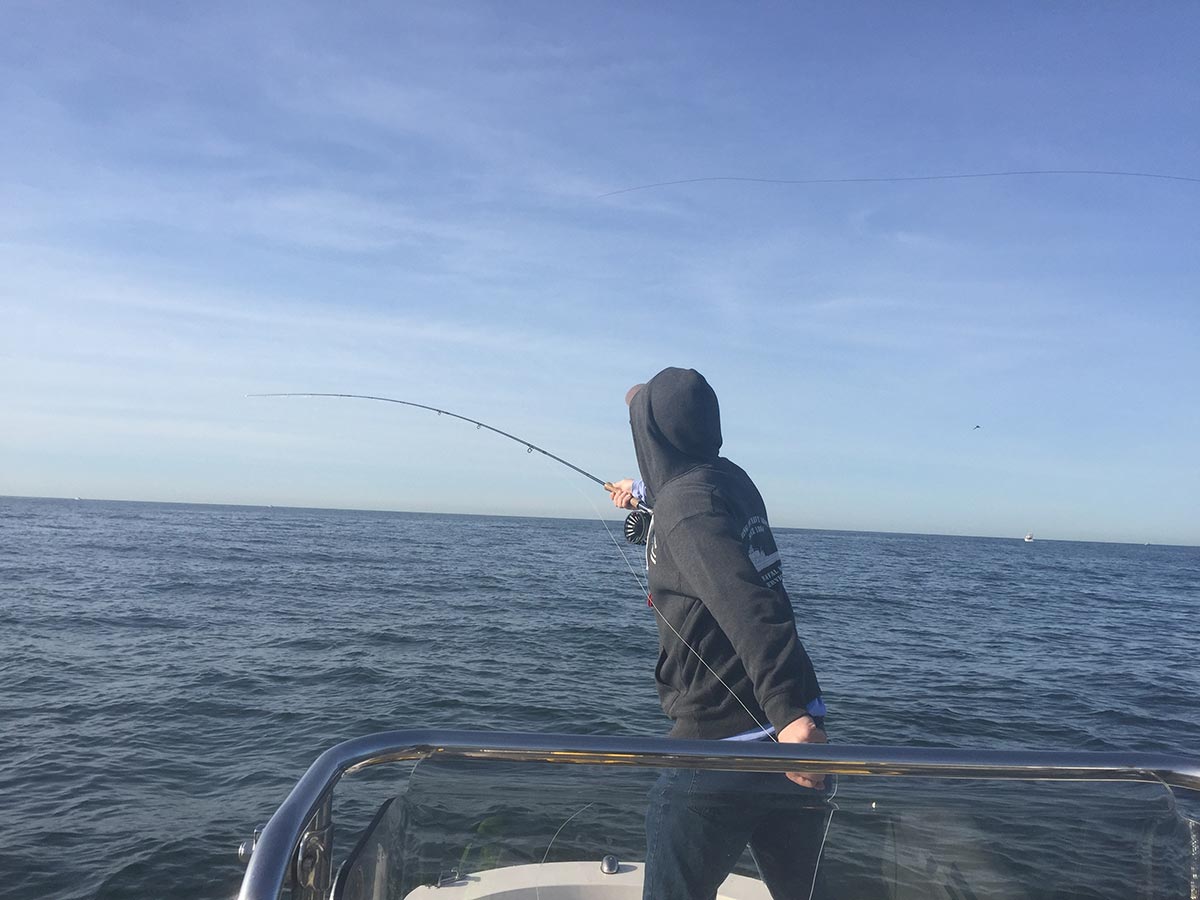 Where you place your fly is more important than what it looks like, so fly selection is relatively simple.

While not thought of as a typical fly rod quarry, summer flounder can provide action when other species have sought refuge from the summer heat well offshore. Often considered a deep-water fish, these dorsally compressed predators prowl flats and estuaries in depths measuring in the single digits. These relatively abundant, aggressive flatfish can be found on nearly any beach from Cape Cod south to North Carolina, often inches from the water’s edge and provide wonderful sport on fly rods ranging from 6- weight up to 10 using intermediate or sink tip lines.

In 1975, Captain Charles Nappi caught a 22-pound, 7-ounce summer flounder off of New York’s Montauk Point that still stands as a world record in the eyes of the IGFA today. This is much larger than the fish you can expect to catch using the long wand, but that doesn’t mean you won’t tangle with some outsize specimens. The fly rod record weighs considerably less than the all-tackle one; at 8 pounds, 4 ounces it was quite a large fish, stretching the tape to about 27 inches. I landed one of similar dimensions quite by accident while probing the 3-foot depths at the mouth of a creek during a falling tide using a Clouser minnow around my eighteenth summer, though the thought of a record never crossed my mind at the time.

I have fished for fluke in less than a foot of water to depths that required over a pound of lead to hold bottom. In both size and numbers, I have always been more successful in the shallows. Having such a laterally compressed outline means they can hide almost anywhere; underwater footage shows the flatfish shimmying themselves into the muck, literally disappearing in front of your eyes. If you didn’t see it happen, you would easily miss the slight protrusion of their eyes above the benthic substrate. They can also alter their chromatids on a whim, changing color to further blend with the substrate, making them well adapted to their role as ambush predators.

They don’t spend their entire lives buried in the mud, though. Fluke are so aggressive that surf anglers catch them on outsized swimming plugs intended for striped bass often enough that it can’t be dismissed as a freak occurrence. I have caught them fishing for other species in the midst of a blitz, the commotion that ensues when a school of baitfish meets a marauding school of predators like bluefish or striped bass, near the top of the water column. In recent years, several videos of fluke propelling themselves out of the water in pursuit of baitfish on a calm beachfront have made the rounds on social media, further confirming their aggressive nature.

Identifying ideal structure is the key to catching fluke on the fly. If you were using conventional tackle to fish the 90-foot depths, you would look to the contour lines on your plotter for guidance, concentrating your efforts on depth changes of 10 feet or more. But when you’re only dealing with 10 or 12 feet of water, a change of only one foot is significant. Because these changes are so subtle, you really need to be on the ball. Much of this structure won’t be on a chart; the difference in depth can sometimes be so slight that they may not even appear on a fishfinder. Even the largest fluke is only a few inches thick at most, so they lie undetected on the down tide side of the smallest of humps, easily holding in the resultant current break and gobbling up any morsel unfortunate enough to be swept over head.

Fly rod selection has more to do with the depth of water you will be fishing than the species you are pursuing. Fluke can be dogged fighters, with large specimens initially providing great difficulty moving them. But this is short lived, and you’ll probably never see your backing. And unless the bottom happens to be covered in snags, there’s little chance you’ll be broken off, though getting them up a couple feet off the bottom quickly, greatly increases your chances of landing the bigger specimens. Any fly rod you already use to probe the Northeast salt will do the trick, so as long as it has a decent backbone. While a sealed-drag reel with the ability to stop a fully loaded freightliner is always a good idea, it’s not necessary here. I still regularly use a Pflueger Medalist that I’ve had since my youth when chasing flatfish with great success.

For the optimum presentation, you want your fly within a foot or two of the bottom. You can accomplish this with a floating line in waters that don’t reach the bottom of your swim trunks, and you can reliably fish with a sink tip in depths to about 6 feet. But to reach deeper water, and stay there, full-sink lines are ideal. To really get down, you want the fastest, heaviest line your rod can handle, and this is the driving force behind choosing some of the heavier rod weights. If you were only fishing depths of 6 feet or less, a 6-weight would be ideal. It’s when you try to probe the 20-foot depths that a 10-weight becomes desirable, outfitted with line with a sink rate of even 6 or 7 inches per second. As a healthy compromise, an 8-weight with a few spare spools loaded with intermediate, sink-tip, and full-sinking line with anywhere from 4 to 6 inches per second will cover all the bases.

Fluke have teeth, though they are not as menacing as those worn by bluefish. That said, they will easily destroy a tippet if it’s too light, so consider 10-pound the minimum. You can get away with less, but that will mean retying after every fish. I prefer fluorocarbon to mono, as fluoro offers greater abrasion resistance and disappears under water more readily. Leader length will vary on water depth and the sink rate of your fly line, so be ready to experiment. I usually don’t bother with tapered leaders, preferring a simple trace of 10- to 20-pound fluorocarbon.

The traditional method of fluke fishing involves slowly drifting in a boat, dragging weighted baits over structure on the bottom. While covering ground often equates to catching more fish, fly anglers are significantly limited in the depths they can reach, even with the heaviest of sinking lines. To be successful with the long wand means staying in depths of 20 feet or less, with less being preferable, and making shorter, more purposeful drifts to thoroughly dissect a piece of structure.

Drifts of just under 1 knot are best when using fly tackle for fluke, as the current forces the thicker fly line upward. While most anglers curse days in which the wind and tide go against each other, these can be a blessing for fly fishers. Use a drift sock, or even a 5-gallon bucket tied to a mid-ship cleat to further slow your progress on windy days. You want to cast up current from the direction of your drift, giving the line plenty of time to settle before you reach what you expect to be productive ground. You won’t be actively retrieving the line, instead you will just move the rod tip to impart some action to the fly.

Concentrate your efforts over the most productive stretches, even though this means you will be repositioning the boat often. If you have a GPS on board, the Man Overboard button will prove to be exceptionally useful. Every time you hook a fish, mark it so you can quickly return to the same spot to try for others. Even better, make a waypoint so you can keep coming back to it week after week. Don’t worry if your boat doesn’t feature a whole host of modern electronics; the proximity to the shore will certainly allow you to take some land ranges. Break out your logbook and mark down ‘in front of the white house with three windows, about 10 feet off the bulk head,’ and you’ll be able to return exactly where you want to be later. Also note the tide; these pieces tend to be very dependent on water flow and direction.

So far I’ve covered approaches for the boating angler, but shore bound anglers can cash in on this action as well. Because you’re fishing waters that you can wade through, you can leave the heavy lines at home and downsize the rod a bit, though the all-purpose 8-weight with an intermediate or sink tip line is fine. You can’t cover water by drifting, so you’ll have to use your two feet and plenty of blind casting. Using a weighted fly, cast out and hop the fly back towards you, moving it when the puff of mud or sand from touchdown has dissipated. Work in a fan pattern and walk forward only after you have covered all the ground immediately in front of you. Alternately, you can do quite well if you can find a spot with just enough current to gently pull your fly along, just like you were dead drifting a nymph pattern or swinging for steel.

As I mentioned earlier, fluke will sometimes abandon their usual lie in wait tactics in favor of a more active approach to hunting. Nowhere is this more likely to happen than on a shallow flat during slack tide. These wide open expanses likely won’t have water rapidly sweeping over them except at the very peak stages, so fish won’t be as concentrated as they would be near a pinch point that is dumping concentrated bait anyway. Instead, they will likely be spread out over the relatively featureless sand or mud bottom. This will be especially true during slack tide, where the flatfish will be actively searching out food. While flounder are far better swimmers than you would expect them to be just by looking at them, they build up lactic acid fairly quickly, which makes their bursts of speed suited to short distances.

With fluke, where you place your fly is more important than what it looks like, so fly selection is relatively simple. Their favored forage is the sand lance, a 3- to 6-inch long baitfish known locally as the sand eel because of the conspicuous lack of a dorsal fin. The narrow profile is easily matched with a Clouser Minnow or Jiggy, with chartreuse and white ties being preferred though olive/white and yellow/white versions will also produce. When the sand eels come inshore during the spring and fall, squid are right on their heels, gorging on the slender baitfish, so throwing squid patterns at this time can score with larger fluke that have keyed in on the bigger baits. But fluke are voracious, and will eat larger baits, up to and including juvenile Atlantic menhaden, also called peanut bunker. When the larger profile baits dominate the scene, look to patterns such as Deceivers or Cowen’s Magnum Baitfish.

Next time the sun is high and has driven the other gamefish to seek refuge from the intense insolation that the glowing orb provides, take advantage of the fluke’s aggressive nature and propensity to lie in wait on knee-deep flats. You probably already have everything you need to tangle with the flatfish, and there’s probably some holding just off of your favorite beach.