Offshore wind turbines are coming to the waters off the shores of Long Island and New Jersey. How will recreational fishing be affected?

Of these three projects, the closest offshore wind farm to New York’s coast will be Empire Wind, which will not be visible from Jones Beach on Long Island except under clear weather conditions. If you fully extend your arm and look at your thumb, the turbines may be visible at less than a quarter the size of your thumbnail. These three projects under contract with New York State are expected to begin commercial operation by 2024.

From Cape May, NJ to Cape Cod, MA there are currently 10 separate offshore wind lease areas identified by the Federal Bureau of Ocean Energy Management, (BOEM), a division of the U.S. Department of the Interior. Future considerations by BOEM for new lease areas may create additional offshore wind projects. With all of this happening off of our shores, I have often been asked by fishermen about these projects.  Here is my perspective on some of your questions. 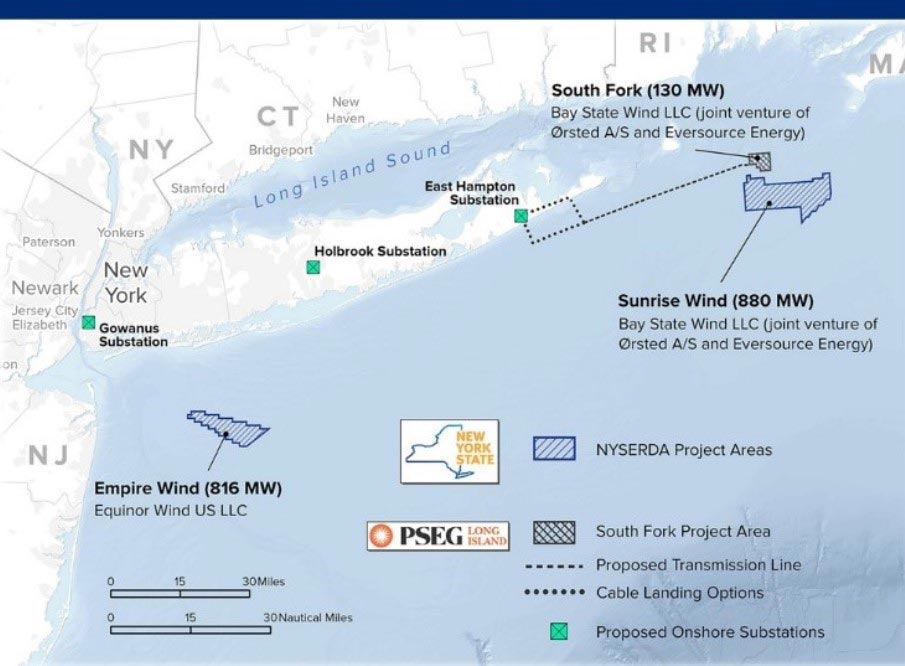 “Will I be able to fish in these areas?”

The U.S. Coast Guard (USCG) has issued clear guidance on access to the project areas. In an August 2019 Navigation and Vessel Inspection Circular, (NVIC), the USCG stated that, during construction, a limited security zone will exist in the immediate area around each turbine. Once each turbine is completed, the security zone will be lifted, allowing fishermen full access to the waters immediately adjacent to each turbine. However, the USCG will prohibit tying up to the turbines – similar to the restrictions that currently exist around bridges in the New York City area.

The Empire Wind Project offshore of Jones Inlet, or the “Pizza Slice”- as some call it – is being built by Equinor, one of the largest energy companies in the world. Equinor plans to use approximately 80 turbines, each spaced about 0.80 nautical miles apart, and gravity-based structures instead of pile driven steel jackets to mount each turbine. The concrete gravity bases and scour protection (rock), which extends several hundred feet around the base, will prevent erosion. The offshore cable is planned to run up New York Harbor and interconnect to a ConEdison substation in Gowanus, Brooklyn. Empire Wind plans to use South Brooklyn to site its operational base.

The second site, the Sunrise Wind Project, off Montauk Point, is being developed by a partnership between Ørsted, the largest offshore wind developer in the world, and Eversource Energy, New England’s largest energy delivery company. This site is planned to contain approximately 110 turbines which are proposed to be uniformly spaced in a 1 x 1 nautical mile grid pattern. The turbines will be on pile-driven bases with scour protection (rock) to prevent erosion. The inter-turbine cable system is expected to interconnect to a Long Island Power Authority substation in Holbrook, Long Island. Sunrise Wind will locate its operational base in Port Jefferson with additional support from Montauk.

The South Fork Wind Project, another Ørsted and Eversource Energy project, is proposing to use 10 and 15 turbines, spaced in a 1 x 1 nautical mile grid pattern and be placed on pile driven bases with erosion protection. The offshore cable will be interconnected on the east end of Long Island in East Hampton Township. The project plans to locate its operational base in Montauk. 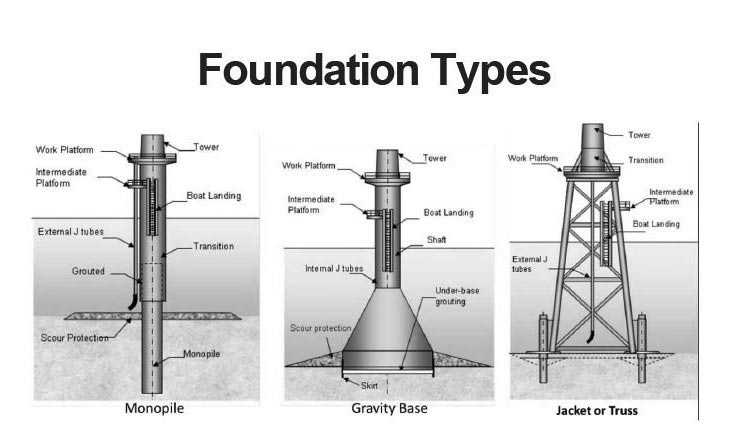 Up close, the offshore wind turbines will be amongst the largest in the world. Many have probably seen onshore wind turbines, and these will look similar, only bigger. Currently, the GE Haliade-X turbine, rated at 12 MW capacity, is 853 feet tall, almost three times the height of the Statue of Liberty, and only 605 feet shorter than the top of the Empire State Building. One revolution produces enough power to run a typical home for a full day.

There are several major components to an offshore wind turbine. Each turbine consists of a base, tower, center hub, nacelle (the unit that houses the generator), and three blades. When turning, the blades will come within 90 feet of the water’s surface. Each turbine will also have proper USCG approved markings to help with navigation and safety for all mariners, including fishermen.

“How do the turbines provide power to the grid?” 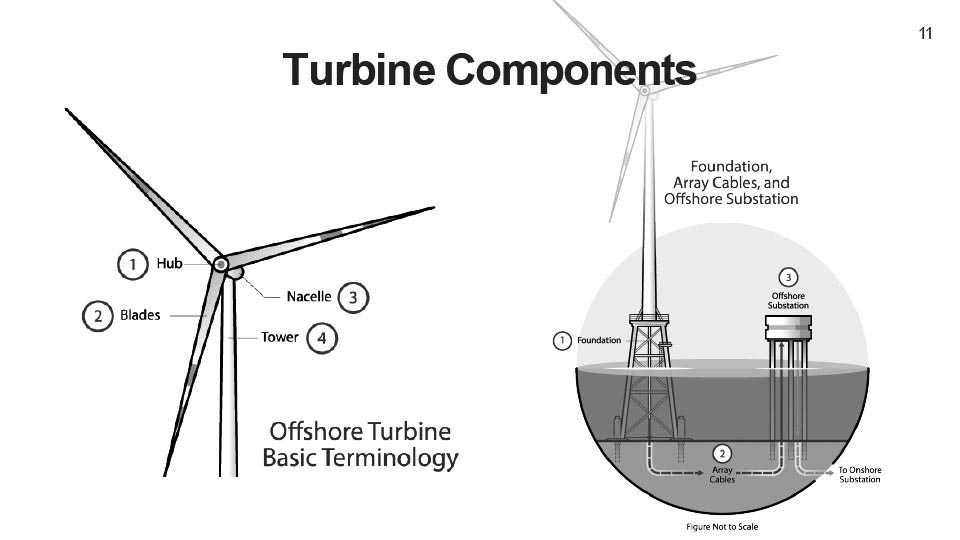 “What will be the effects on the species I fish for?”

The answer to this question is best broken down into parts. First, many fishermen ask, “I’ve heard the buried cables might affect fish movement. Is that so?” What the fishermen are referring to is the electromagnetic force, or EMF, that is emitted by the transmission cables buried in the sea floor. Scientists are examining EMF and its effect on fish movement. Preliminary results indicate that burying the cables provides shielding and minimizes the effect, but some species do react, most notably the Elasmobranchs – sharks and rays. The sensory receptors in many of these species are sensitive to electrical “signals,” as it is one way they locate prey. Some research suggests short term avoidance when in close proximity to the cables, declining within feet of the cable. Summer flounder may show similar avoidance behaviors to buried cables and there is limited evidence that scup or black sea bass are impacted. Researchers do believe that fish will familiarize themselves quickly with the new offshore wind cables just like how fish interact with EMF from other offshore telecommunication cables.

“Will the towers themselves attract fish?”

After 45 years of running party and charter-boats out of New York, I have recently increased fishing on my own in Florida around the oil rigs in the Gulf of Mexico. The rigs hold impressive amounts of fish. They are “structure” in an otherwise featureless Gulf of Mexico. If the offshore wind turbines attract bottom and pelagic species like what occurs in the Gulf of Mexico, then they will be an asset to the recreational fisheries in the Mid-Atlantic region. Indicators from the first offshore wind farm installed off Block Island, RI, seem to bear this out.

Offshore wind power is the future and it is our responsibility as fishermen to stay informed and work with the state to make sure it is developed in a manner that provides benefits to our industry and has little or no negative impact on our fisheries.

To read more about NYSERDA and offshore wind and how to become involved, readers should go to nyserda.ny.gov/offshore-wind or email me at captony@dilmarserv.com with questions and ask to be put on an Offshore Wind Update list.

Editor’s Note: the author is the Recreational Fisheries Liaison to the New York State Energy Research and Development Authority (NYSERDA).