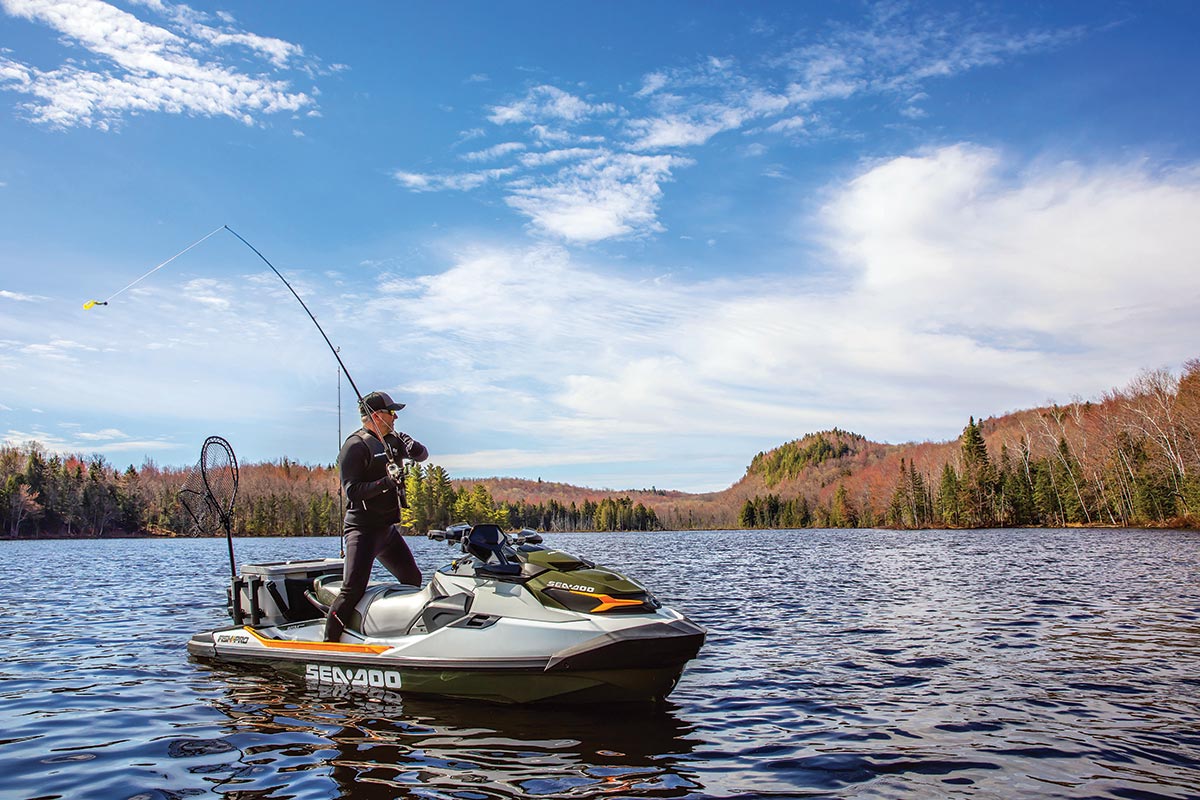 The new breed of fishing “wave runners” proves there’s a tool for every job.

I spent many years surfcasting along the beaches of New York and New Jersey. I give lots of credit to all surf fishermen; catching a fish from the surf is true hardcore fishing at its best and the most gratifying way to catch a large gamefish.

Although I’ve had success fishing the surf, the majority of fish always seemed to be a hundred yards or so out of reach. Simply put, I was getting tired of watching the boat guys clean up.

I tried kayak fishing but soon realized I needed more speed to get to the diving birds as they quickly moved around following the feeding schools of fish. After watching a few videos of some guys in Australia fishing off wave runners, I thought that might be the solution to my problem.

I’ve always been an adrenaline junkie, whether technical rock climbing, back country snowboarding, or Brazilian jujitsu.  And, I’m a commercial roofer by trade. Work or play, I always seem to lean towards high adrenaline activities, so this seemed to fit my personality perfectly.

After doing a bit of shopping around, I walked into a personal watercraft (PWC) dealer and the minute I saw the Sea-Doo Fish Pro I was sold.  It comes already rigged up with a detachable cooler that had six rodholders on it. The Fish Pro also had a Garmin fishfinder/GPS with an in-hull transducer. There’s lots of storage space in a big compartment directly in front of the driver seat with easy access.

The Fish Pro has a 155-horsepower engine with an 18-gallon gas tank.  This is plenty of horsepower and fuel to get me on the fish quickly with a top speed of about 55 mph. As of this date, Sea-Doo is the only manufacturer that makes a fishing PWC that I’m aware of.

After my first trip out fishing on the wave runner, I realized that it desperately needed a rodholder next to the driver’s seat. I customized one myself out of a square plastic bucket. I then fastened a rodholder into the bucket that fit perfectly inside the foot well. I even cut a hole in the side of the bucket to insert my foot at the bottom to hold it in place at high speeds.

Many people have misconceptions about this new breed of wave runners. They are perhaps used to the Jet Skis and Wave Runners that they may have rented in vacation resorts. Those older style PWC were very tippy and not user-friendly, and you always got soaked when riding them. These new models are built for stability and speed; and in the case of my Sea-Doo Fish Pro it is also built to fish.

I like to travel up and down the East Coast fishing various locations. The ease of trailering and storing the wave runner is a no brainer. It travels well on a small trailer and fits perfectly into half of my garage at home.  And in over 15 months of use I have never fallen off either.  It’s a very stable machine that allows me to stand up and fish and easily move back-and-forth on the seat between the cooler and the storage compartment. I have no trouble landing a 30-pound striper on it.

The answer is, yes you can.  I have fished all four seasons on my PWC with no problem at all; you just have to dress for the weather and stay dry in the cold. My recipe for cold-weather dressing is as follows: I layer up on the bottom with synthetic thermals. If it’s extra cold I’ll also wear my snowboarding pants. Then over all of that I pull on an old pair of fishing waders with the stocking feet I cut off. These wader pants get pulled over high insulated waterproof boots.

Boots are always a must except on hot summer days. In windy days on rough water you will get some blowback from the water spray. To combat this I wear hooded rain gear over the top. Then, for the most important item on windy days; I pull a tight fitting over the head wetsuit hood (the type with the small bib) over the hood of my rain gear. I use my life jacket to tuck the bib in. I usually stay bone dry. I hope to eventually invest in a dry suit! 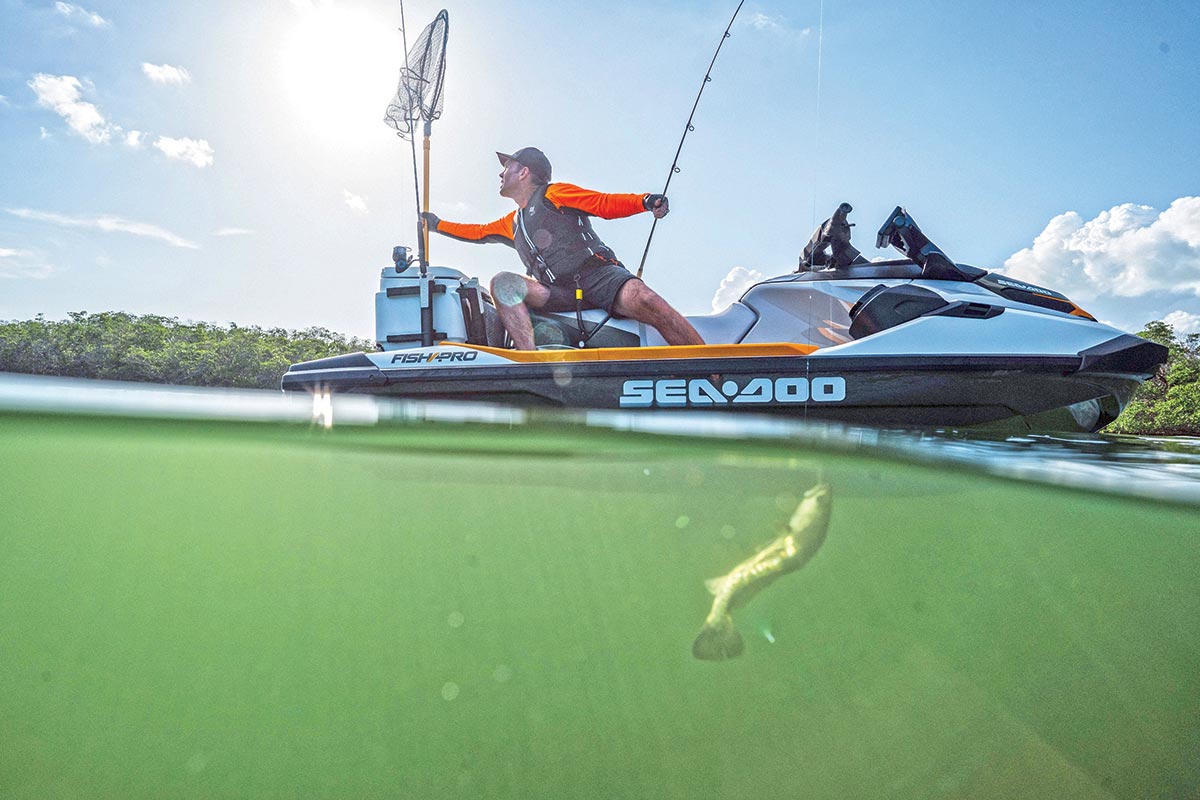 Winter can be a very long and dreary season for most fishermen; but if you do your research and connect with fishing groups on social media you will find that there are many rivers throughout the Northeast that hold loads of striped bass. Check your local regulations but many East Coast spots are legal to target striped bass. Rivers are also a lot calmer than bays and oceans obviously, so rough water is rarely much of a concern as the cold weather.

Holdover striped bass that are mostly schoolie size stay in the rivers until late March until they start moving out to stage up for their journey to spawning grounds. I had many 50-plus fish days last winter drifting in the river current while using a painfully slow retrieve.

Much easier to trailer than a larger boat, I’ve been able to take my Wave Runner to Florida where I’ve had a blast fishing the mangroves of the Ten Thousand Islands area where you’ll find loads of snook, sheepshead, snapper, whiting, Jack, and even a shark or too.  For me personally, once the spring comes around there’s no place I’d rather be except the Raritan Bay, which I will fish continuously until mid-May. During this time the Raritan holds massive amounts of stripers both big and small all staging and fattening up for their spawning run up the Hudson River.

During the summer I’ve made a few trips down to the Chesapeake Bay where you’ll typically find a big striper bite on by the Bay Bridge in mid-summer. I have also spent many hot days fluke fishing aboard my PWC. While fluke fishing I am always keeping a keen eye up and down the shore looking for birds diving over schools of bluefish. Once I spot the diving birds I’ll change to my bluefish rig and race over to the schools of gators for a rush of adrenaline; it’s relatively simple to adjust the Wave Runner to drift by the school again. This is exactly what I bought this machine for, as I have caught hundreds of bluefish, fluke, weakfish, and Spanish mackerel off my Wave Runner this way last summer.

Once fall returns the focus goes back to the striped bass and false albies (The albies were pretty much a no show last fall.).  Cruising along looking for the birds, I’ll throw a 5-inch baby Bomber below them.  It is usually instantaneous nonstop action until the birds disappear; then it’s back to solo running and gunning.

I also had lots of success casting and retrieving using either an Ava or modified diamond jig working the bottom. I have fished the shores of New Jersey and Long Island, New York in this fashion. Once the bass disappear in December it’s back to the rivers to start the cycle all over again.  Despite popular opinion, you can be a four season fisherman on a PWC.

Some of the items on my bucket list include getting on the tuna bite up in the Cape Cod Bay and also the * black drum bite in the Delaware Bay. I mostly fish light tackle set-ups so I guess I’ll have to beef it up a bit for those two!

Wave runner fishing is not for everyone. On rough bronco riding days my 61-year-old body will take a bit of a pounding.  But just like a kayak you are essentially right down on the water.  And unlike a kayak I have the horsepower to get on the fish quicker, with the power to get out if the seas turn angry.

(* On May 30, after getting a tip from the NJ/DE Bay edition weekly video forecast from The Fisherman Magazine, the author trailered his Fish Pro to Delaware to catch a black drum off Broadkill Beach, knocking one more species off the bucket list).