I Wish I Had a Wetsuit, or a Large Coffee - The Fisherman
Skip to content
Login
Subscribe 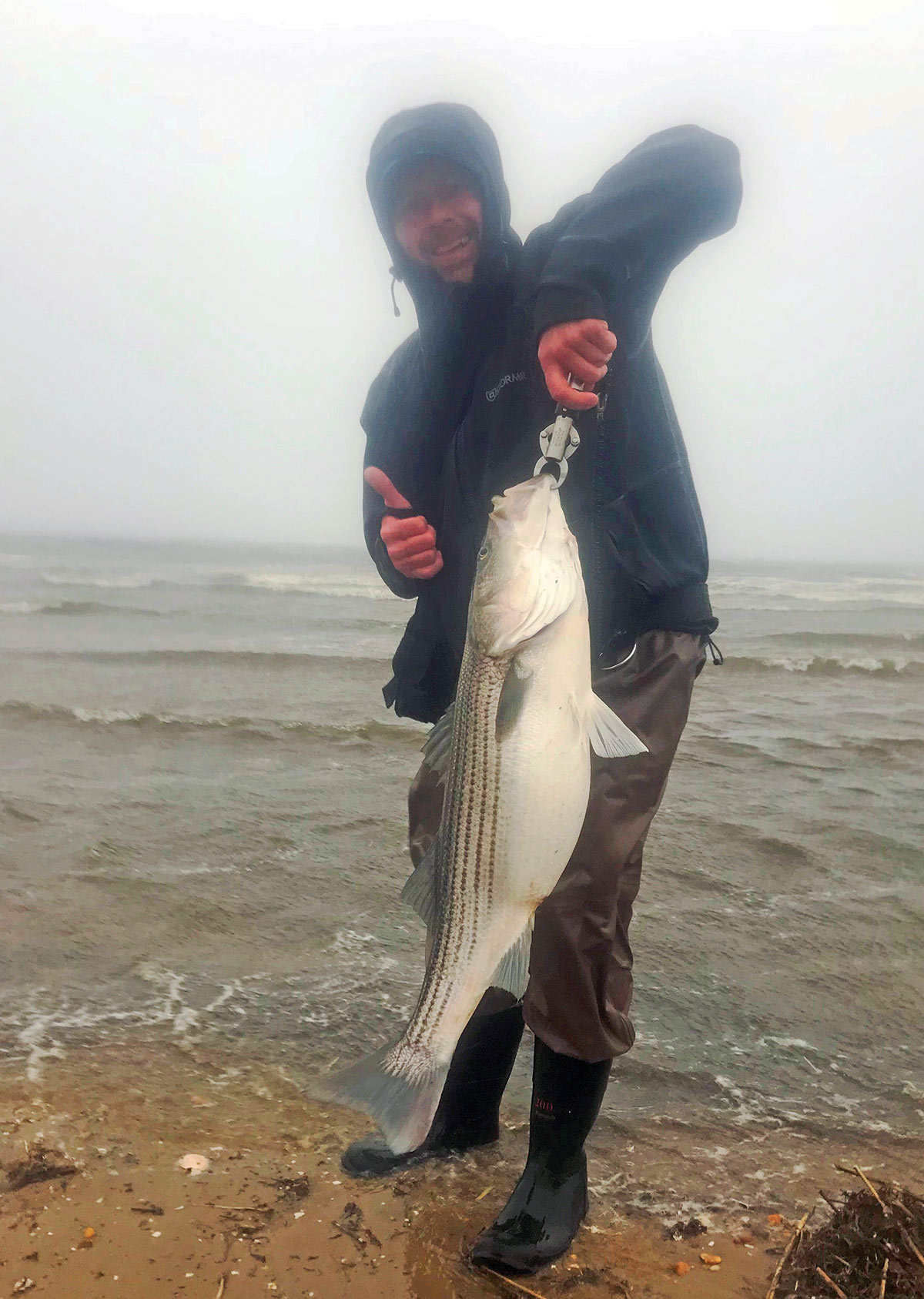 My friend called me about two hours into the Ocean City fishing flea market on April 14; the bite was on, but 95 miles to the north of where I was working.  Perhaps it was the pending new moon on the 15th that put fish on the feed, or maybe the 60- to 70-degree temperatures finally prompting folks to hit the surf in greater numbers to find the fish.  Whatever the trigger, the 2018 run of cow bass was officially underway.

In my car I had 9-foot Air Wave with PENN 706 attached; there was also a minimally stocked Bronco plug bag, and a set of cheap waders.  It didn’t take much deliberation; I snared a pair of bone white SP Minnows from the Fin-Atics booth to my right, and a handful of Pappy’s Pride “wonder bread” metal lips from across the aisle; word from my buddy was that it didn’t matter what color you used, so long as it was white.

I dropped the hand-truck full of show stuff off at The Fisherman garage in Point Pleasant by 4 p.m. and was in my waders and drytop by 5; the Albatross had finally arrived.  There was a particular point of land where fish had staged the previous two nights, but it required crossing through or around a shallow creek.  With a couple of hours to go before high tide, the wind had switched hard to the east a good 20 to 30 knots, pushing water up across the bar that buttressed the creek.  Watching two others wade across the center with water to their breastbone, I adjusted my belt, cinched my top and followed the path across.

Suffice to say, once atop a perch of sod and prepared to launch, the wind kicked up another couple of knots making plug casting a challenge.  Working around the point in lee of the wind a separate challenge arose as I had to contend with the wind swept lines of bait fishermen who appeared to be hunkered down for the evening.  The fog rolled in around sunset before I was able to reposition myself on an edge next to a Jersey transplant from Boston named Delaney who was releasing a fish in the 20-pound class.

After getting a cellphone snapshot for Delaney we started timing our casts to avoid tangles; three others followed suit, each timing deployment to get lures into the wind and dropping down an edge where a handful of good fish, many laden with eggs, were ultimately dragged to the sod.  For me, the teen to 20-pounders were the first good fish of the season, and it was good to see a few stripers sliding back into the Raritan for their spawning task ahead.

Unlike those ideal evenings where the wind lays down just as the sun sets, the winds that Saturday night continued gusting mercilessly.  Where air temps had been in the 80s by day, a chill soon set in, dipping into the lower 40s in what was pretty much the norm for the spring of 2018.  Adding insult to injury, the fish turned off after dark.  It was dead high tide; suffice to say, the creek would be impassable for the next several hours.

Earlier in the day someone had dragged some driftwood into a pile behind a red can buoy, which had blown in from a channel, the glowing embers from the earlier fire still viable.  In the dark, the blinking red light of the buoy continued flashing diligently, though it was now horizontal and miles away from its responsible mark off in the Raritan.  Wet and cold, Delaney and I settled in behind the stranded buoy with the other castaways all huddling around the rekindled driftwood campfire.

The first hour into the outgoing tide, I swear those winds were gusting to 50 mph across the bay.  I pulled my knit cap over my eyes to keep out the sand, but it was impossible.  At one point I reached over and turned the handle on my ‘Z’ and found it was completely seized; everything was encased in sand.  A popping ember burned a hole into Delaney’s waders.

The second hour a crew of about a dozen Spanish-speaking anglers rolled a small skiff down the beach, and the castaways followed.  At the edge of the swollen creek, we’d considered offering plugs and tackle in exchange for safe passage across, but watching the first crew’s awkward attempt against the side-swiping winds only chased us back to the warmth of the fire. I tried texting a nasty message to my buddy, but my pruned fingers and newly acquired “bass thumb” made that difficult.

About 11 p.m., three more dark figures came up from the west bank, passing quietly by the fire and along the dark, sandy path towards the creek.  Again the castaways gathered gear and headed off to follow the leaders.  After poking and prodding the depths with a surf rod, the first brave soul entered the creek with waters around nipple height; he was followed by another, and then another.  It was roughly three hours into the outgoing tide when all the castaways were safely at the other side thanks to a nameless leader, though several additional ounces of water seeped in under my belt in the process.

I was still shaking sand from my eyes and ears on Monday morning as weather alerts sounded on my cellphone about higher than normal tides around yet another nor’east system and the spring tides of April.  At least I wasn’t out on that sod bank.  I dropped my reel in for servicing on Tuesday, and by Wednesday I was shopping around for a new wetsuit; yeah, I get it now!