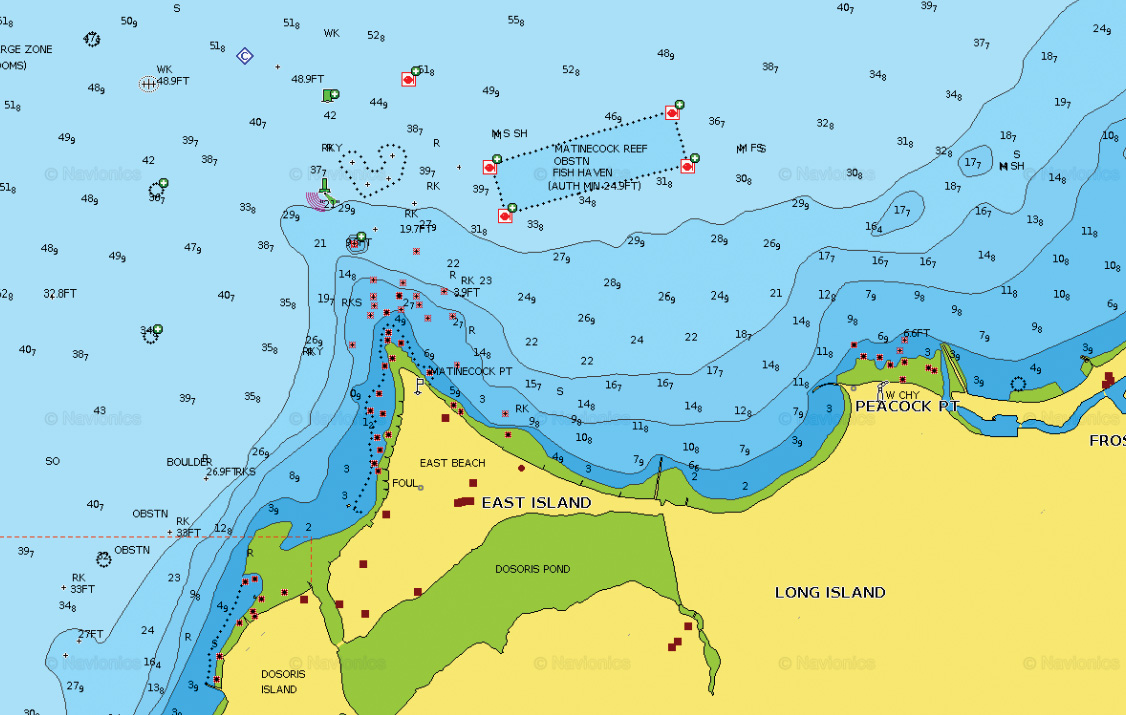 The fall season of 2017 along the western end of Long Island Sound went into the history books as one of the best weakfish runs in recent times. Open, charter and private boats from City Island to as far east as Port Jefferson enjoyed exceptional and unorthodox weakfish catches while sinker bouncing for scup, sea bass and believe it or not; blackfish. One of those hotspots that has made a resurgence several seasons in hiatus is Matinecock Point, which hopefully will again produce exceptional weakfishing and good fishing for other species this season.

Matinecock Point is located on a small peninsula extending north into Long Island Sound off Glen Cove and marking the east side entrance of Hempstead Harbor. It is primarily known for its fine fluke and porgy fishing as well as extraordinary weakfish action at times during June. The area consists of a combination of hard sand and rock strewn bottom, as well as a 41-acre artificial reef lying in 30 to 40 feet of water just northeast of the point.

The action starts by early May as stripers move onto the rocky lairs and structures, feeding on an abundance of forage baitfish. Anchoring and chunking fresh bunker during an ebb tide will produce the best results, however, drifting fresh bunker chunks on 3×3 rigs or working bucktails will also prove productive.

June belongs to the weakfish and during the 2017 season, they did not leave the area until mid-October. Anglers bouncing 1/2- to 1-ounce Albino Bass Assassins or soft plastic jigs along the bottom experienced some phenomenal catches.

Fluke fishermen working the sandy fringes of the structure-rich bottom will find good action in 10 to 40 feet of water from June through August. Bucktails and soft plastic jigs tipped with sand eel, spearing, squid or fluke belly strips are effective, as are fluke bullets and rigs.

From July to the end of October, porgy fans will find solid action anywhere from the beach on out to the reef in 30 to 40 feet of water. Anchoring over any solid piece of structure and applying a chum pot or two of frozen clam chum, and applying clam strips to porgy rigs should provide all the action you want with mixed size scup.

Throughout the summer and fall, bluefish are most likely to pop up at the point at any given time. Those who chunk fresh bunker looking for bass often score big. However, tins and spoons will take their share as well.

Fall spells blackfish and the rocky pieces in 35 to 45 feet of water hold plenty of good size tog as does the reef. Green, Asian and hermit crabs all account for good catches using a one hook rig with a 3/0 Gamakatsu Octopus hook one of the better choices these days. Plan on bringing plenty of extra rigs and sinkers, as the bottom can be quite sticky. Sinkers round out the terminal end with 3 to 5 ounces being the norm for the area; however, if the moon is on a new or full phase, you may need to crank it up to 6 ounces.