As striped bass migrate south, this Garden State stopover draws surfcasters from up and down the Striper Coast.

“Fish are where you find them” sounds a little like something Yogi Berra would’ve said, but it’s especially true when surf fishing Island Beach State Park (IBSP) in the fall.

Some seasons those fish, namely stripers, never stray into the surf zone during their southerly migration. And some seasons, the main bodies of southern-bound stripers pass the New Jersey Coast in federal waters, more than 3 miles off the beach, frustrating even boat anglers.

But then there are years, such as 2016, when the fishing gods smile upon us, and bestow blitz conditions to anglers who limit themselves to the break of the surf.  When discussing perennial hot spots along the Striper Coast, any hardcore surfcaster can easily rifle off the traditional greats – the light at Montauk, Cape Cod Canal, the boulder-strewn waters of Block Island, or the remote striper outpost at Cuttyhunk.

But when all the pieces are in place, as striped bass stack up along the Central Jersey coast to feed before making their final push south, and as the surf action begins to fade in New England and on Long Island, IBSP makes a sound case for being one of the great places to hit during the annual run. 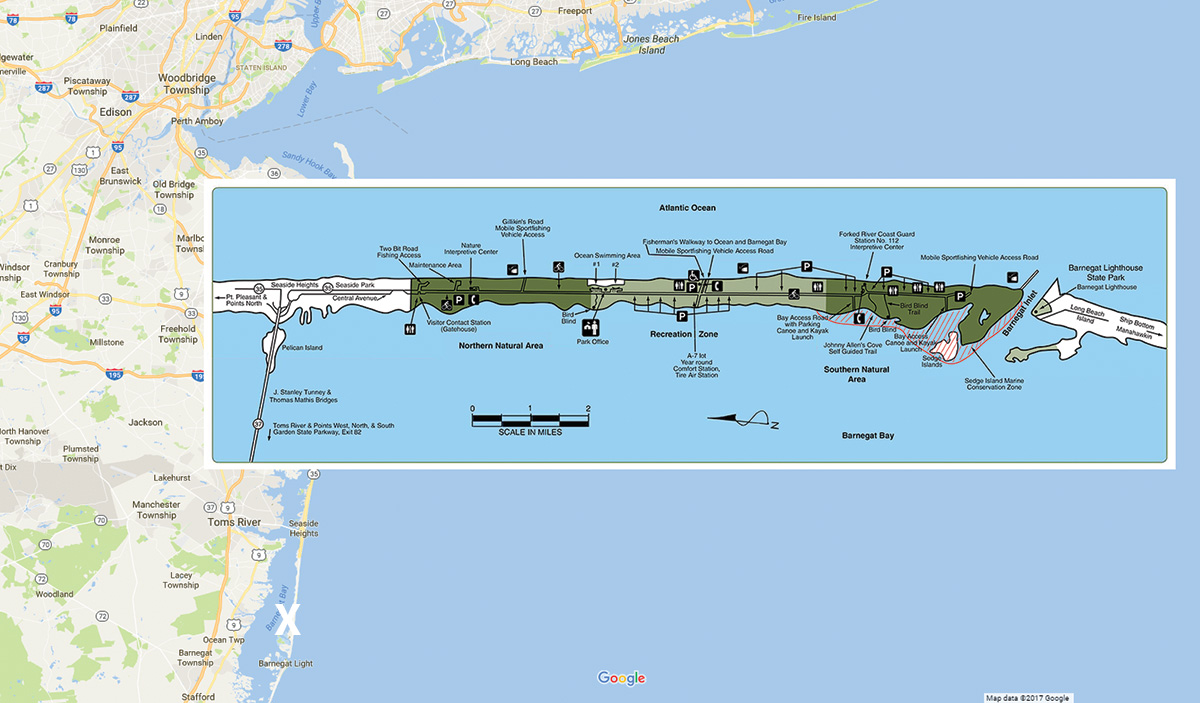 I’m still living off the excitement and success of last year’s November blitz, when along with son Tom and daughter Chris, we stole a crisp autumn morning that turned into a day to remember. We started our sojourn the evening before, casting poppers off 24th Avenue in South Seaside Park. That’s where we heard the fish were. Diving gulls and gannets revealed they were moving and feeding alright, but too far offshore.

Dead low tide let us walk far off the beach, but we just couldn’t reach those tempting swirls beneath the birds. The golden afternoon grew into evening, soft and pink and purple, and we all sensed something special in the autumn air. Fish were moving, fattening themselves up on the abundant bunker. If only they were closer. We all vowed to return the next morning. 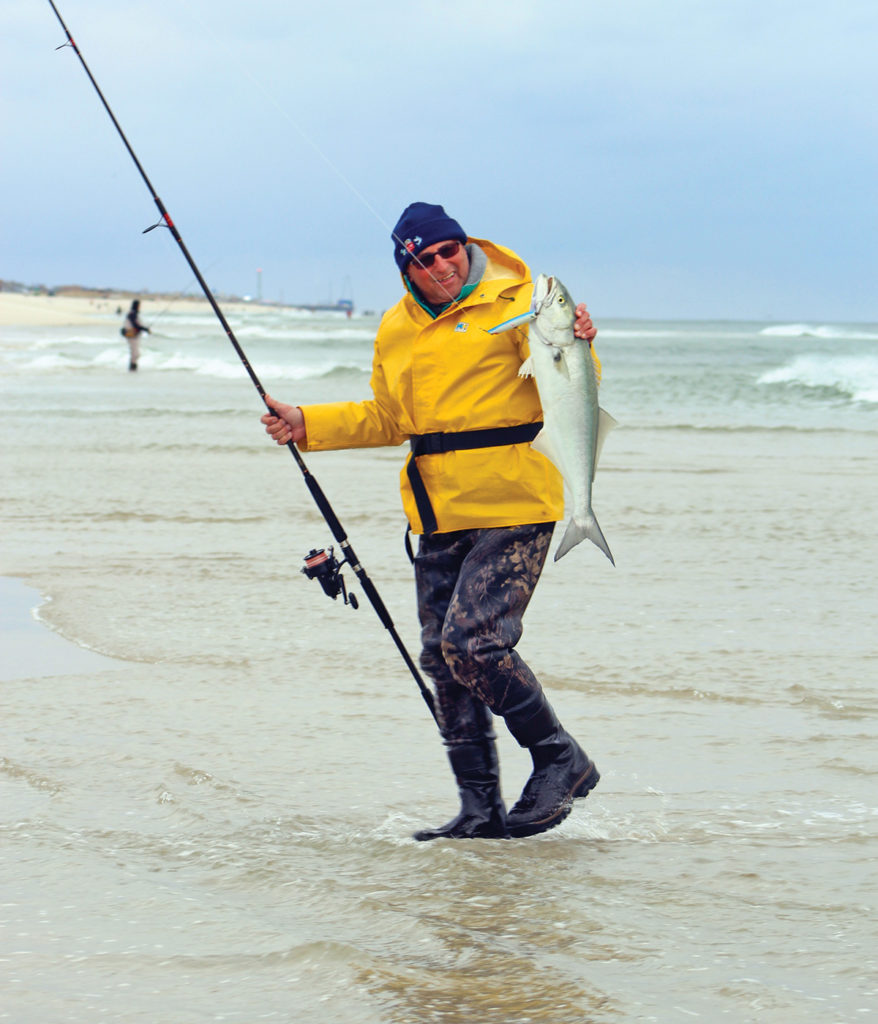 As luck would have it, high tide coincided with first light the next day, and a cold front with a swooping northwest wind put those bunker in tight to the beach, and the bass, along with their complementary slammer blues, followed right on their tails. I should have known it was going to be a great trip – I forgot my cooler!

While the striped bass weren’t huge, there was not a schoolie among them, and the slammer blues were fat with deep-shouldered power. It was classic, gold rush, derby-style blitz fishing; the kind that breaks tackle and wears out muscles. And even though I pay dearly for an out-of-state four-wheel-drive fishing pass at Island Beach State Park, that day all we had to do was walk from IBSP’s central blacktop road to the beach and we were right into the action.

Typically fall surf fishing at IBSP, when fish are moving close to the beach, is run-and-gun: looking for birds, bait, nervous water and promising holes, or other fishermen already into fish. And while IBSP features a mother lode of beach access, especially in the fall and spring seasons, not all of it is available by four-wheel-drive. Sometimes the fish even out the playing field for us, and we have to hoof it over the dunes and through the sandy paths to get to the action. You’ve got to go where you find the fish.

Island Beach State Park on the central New Jersey shoreline offers almost 10 miles of near virgin beach wilderness, a glorified sandbar stretching from South Seaside Park in the north to Barnegat Inlet as its southern boundary. Most of the beach is accessible to the determined surf fisherman either by foot or four-wheel-drive. Right past the main entrance gate, there’s Two-Bit Road, aka the Short Road. It’s walk-on only, but it’s a great spot for a quick surf fishing shot. Plus, it allows access to the northern Natural Area. Walk on with your rod and surf bag, and you have access all up and down a truly wild beach that prohibits most human activity.

Next stop down IBSP is the old Coast Guard Station #110, almost a mile into the Northern Natural Area, and still walk-on only. Park in the small lot across from the Coast Guard Station (now used as a maintenance building), and follow the winding path through the dunes to the surf. Locals call the area from Two-Bit Road down to Gillikin’s Road the “Miracle Mile,” and for good reason. Beaches drop off relatively quickly here, allowing good casting opportunities when fish are passing through.  That’s where we had our memorable blitz trip last fall.

Gillikin’s Road, about two miles from the entrance gate and about halfway through the Northern Natural Area, is the first access road for four-wheel-drive permit holders. Drive on here in the fall and spring seasons, and you have complete beach access all the way south to the inlet (driving north prohibited). That’s over seven miles of top-notch surf fishing opportunities! Plenty of room to scout for points and holes, birds, bait and swirls. In the summer season, Gillikin’s offers only about a mile of access to the south, as the bathing beaches are open and off-limits to beach buggies.

Those bathing beaches offer walk-on fishermen yet another spot to intercept migrating stripers and blues in the off-bathing season. They also mark the start of over 20 access points for the foot-bound surf angler. From A-3, south of the bathing beaches, to A-23, the end of the central blacktop road, each area features a parking lot off the main road. Every path to the beach is its own unique venture, and sometimes navigating a twisting course through maritime forests and dunes is a challenge, especially with waders, a surf bag and 10-foot plugging rod. But if the fish are there, those challenges are part of the adventure – and successful fish stories.

The “end of the road” at A-23 and the stretch down to Barnegat Inlet receive most of the attention from visitors to Island Beach State Park, and rightfully so. It’s more than a final destination. Migrating stripers and bluefish are drawn to the legendary north pocket of the jetty, since it’s a natural bait trap. The inlet area’s accentuated currents, structure, nutrient-rich tidal flow and increased bait presence make it the crown jewel of IBSP surf fishing. Here is where having a mobile sportfishing permit shines; although many have done it, myself included, the mile or so distance from the end of the road to the jetty rocks is a genuine workout.

To me, there’s nothing quite like the clean surf and white sand of IBSP. But that white “sugar” sand is tough on the legs and heart, especially in waders, warm clothing and gear. Pace yourself and enjoy the scenery.

Everyone’s fishing time is limited by work and family obligations, so pre-trip scouting is a necessary but fun ingredient to a fruitful venture to IBSP. Aside from researching social media sites, nothing replaces good ol’ word of mouth or a visit to the bait and tackle shops that service Island Beach anglers. Here you can find out where and when the fish have been hitting, even before it’s posted.

I’ve traditionally favored high water, incoming or outgoing, and dawn/dusk scenarios, but it’s anybody’s game during the fall migration. Dead low may be the hot time, as bunker, mullet, sand eels or other prevalent forage become trapped in the slough between the outer sand bar and the wash. That’s exactly what happened on my dream trip last fall. We left stripers rolling after peanut bunker in knee deep water, after catching and releasing them all morning in deeper water outside of the bar.

On the mainland before the bridge, hit Murphy’s Hook House on Route 37, though Island shops like Betty & Nick’s, Grumpy’s and The Dock Outfitters on the way in off the bridge can provide the latest skinny on IBSP conditions. If bait and wait with clam or bunker is the go-to method, or pencil poppers are the hot lure, the guys in the shops will hook you up – in more ways than one.

If you elect to get a three-day or annual mobile sportfishing permit for IBSP, money well spent in my book, that’s certainly the way to exponentially increase the odds of your surf fishing success in IBSP. But don’t discount the walk-on fishing opportunities either, whether you decide to pay the daily rate or purchase an annual walk-on fishing permit.

This fall could be one of those legendary seasons, when outsize striped bass and slammer bluefish migrate just off the surf break. These fish can be anywhere along IBSP’s 10-mile stretch of white sugar sand, so be prepared to find them by four-wheel-drive or hiking over the dunes. Fish are indeed where you find them, and if you’re lucky enough to run into blitz conditions, the blues and stripers in IBSP will be thick as a buffalo herd, though sometimes moving south just as fast.