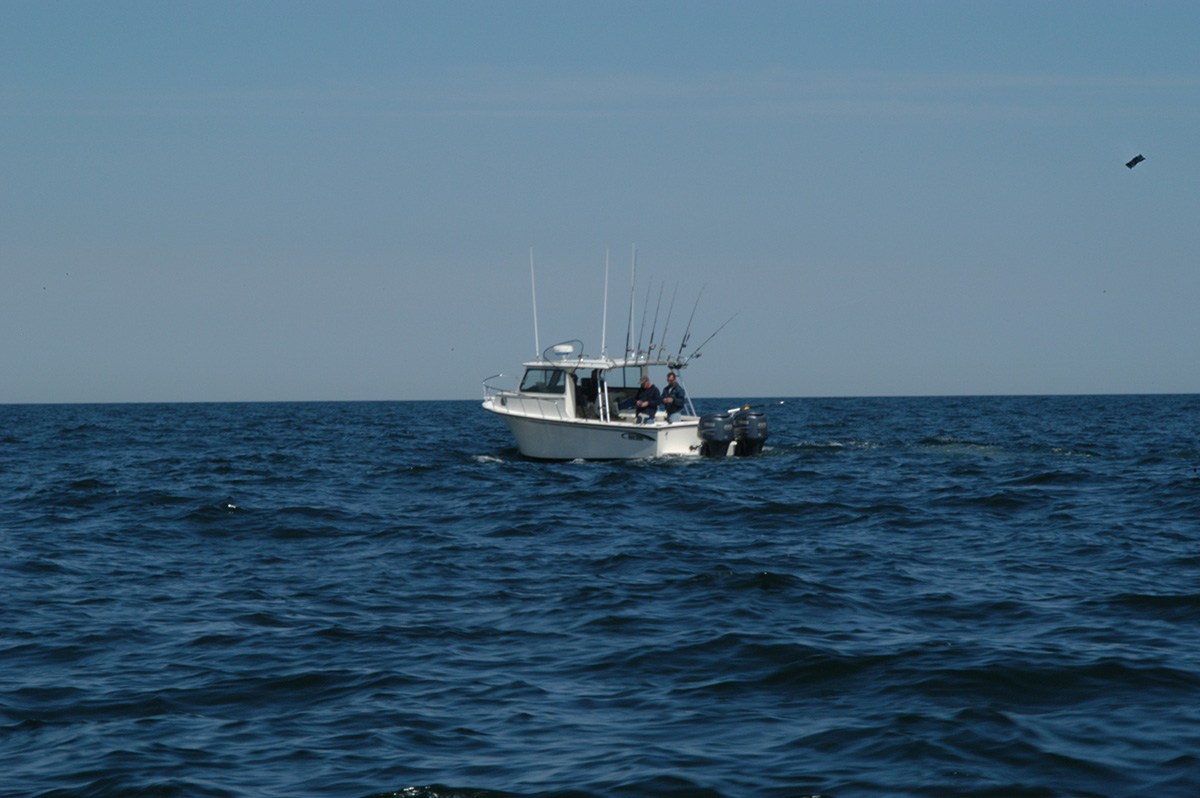 If trolling stripers is on your fall itinerary, you’d be foolish not to take advantage of this highly effective technique.

My introduction to trolling deep diving plugs for stripers came by way of Mann’s Stretch 25s. That initial attempt left quite an impression as the stripers were all over them. Later that same fall, with my son Roger and Dave Morell, I was pulling a spoon on wire, and a Stretch 25 on the other rod. As soon as the line came tight on the plug, the rod bent over, and the reel started screaming.  Once that fish was in the box, I let out the plug again with the same result.  While Roger fought that fish I pulled in the spoon and let out a second plug.  It was loaded up before Rog got his fish to the net. I had developed a new-found respect for the effectiveness of trolling deep diving plugs on braided line.

While the term “stretch” has become nearly as universal (read: ubiquitous) as Coke or Kleenex, deep-diving plugs for inshore and offshore trolling continue to evolve with new and improving lines from Yo-Zuri, Bomber, Rapala, and others. They continue to earn loyal converts, not just for their effectiveness but for the overall simplicity of putting baits to precise depths where fish are feeding.

Everything about fishing these plugs is easy, which is one reason they are quickly gaining in popularity. Rigging is as simple as a 6-foot leader of 50-pound mono – I favor pink Hi-Seas or Ande for their abrasion resistance – with one end tied to the split ring on the plug. I tie a perfection loop at the other end, and attach the perfection loop to my running line with a ball bearing Cross-Loc snap swivel.

Thirty-pound braid is my first choice as a trolling line for these plugs, but there are some people out there who continue to fish with mono, believing that the stretch provided by monofilament acts as a shock absorber when a fish hits, as well as during violent head shakes. On the other hand, braid, due to its thin diameter, allows the plug to dive to its maximum depth.  The fact that braid does not stretch requires the drag to be set a bit on the lighter side.

You do not need expensive tackle to troll deep diving plugs for stripers. Any mid-size, braid capable conventional reel and medium to medium/heavy action trolling rod in the 7-foot range gets the job done. A soft tip section gives the plug the freedom to swim effectively, and tells you when the plug is working correctly. When a deep diving plug is working correctly, the rod tip has a constant vibration.  If the vibration stops, the plug is fouled and must be brought in and cleaned.

Trolling speed with these plugs is as slow as the boat will go.  I often run my 24 Albemarle at idle speed, and that works pretty well unless I’m running against a strong current.  As a general rule, I avoid running against strong currents, but often use the current to work the plug in the strike zone by running parallel to fish-holding structure like bridges, rips and shoals. Fishing parallel to these structures allows the plug to be swept down-current and into the feeding zones of stripers. Another method is to hold the boat up-current of the structure and allow the plug to work back over a shoal, into a rip or into the shadow line of a bridge.

Most of the time a deep diving plug runs straight, but there is the occasional one that wants to pull to starboard or port.  Sometimes this can be corrected by bending the eye on the plug away from the direction you want it to go and sometimes not.  When it can’t be fixed, simply place the plug on the port side if it wants to run to port or on the starboard side if it runs to starboard. This little quirk does not seem to affect the fish-catching ability of these lures.

When letting the plugs back it is easy to see how far behind the boat they are because they float.  Most of these plugs work effectively when towed between 50 and 100 feet behind the boat. Most plugs have an optimum trolling distance that allows them to reach their targeted depth. Be very careful when turning that one plug does not overtake the other.  If they do mate, the ensuing mess requires some major surgery to repair. Bomber, for example, makes their Certified Depth, or “CD” series in 25 and 30 models meaning they’re designed to work most effectively at 25- and 30-foot depths respectively.  They hit that sweet spot with about 60 feet of 50-pound braid out while trolling at 4 to 5 knots.  The X-Rap Magnum from Rapala comes in 10, 15, 20, 30 and the new X-Rap 40 model, and reaches optimum depth with approximately 100 feet of line out.

These types of plugs perform as advertised so long as the conditions are to their liking.  The thin braid line allows the plugs to dive to the correct depth while heavy mono keeps them above this level.  As mentioned before, pulling the plug faster brings it up in the water column – go too fast and they tend to go around in circles and jump out of the water.  The newly introduced Yo-Zuri High Speed Vibe, on the other hand, can be trolled at speeds up to 15 knots, making them equally as effective for wahoo offshore as they are inshore on the striper grounds.  Just keep in mind the more line out, the deeper the dive.

If for whatever reason you would like the plug to go even deeper than conditions allow, you can try a couple of things.  The first is to add a drail between the leader and the running line, using heavier weights to get deeper. Some captains I know use drails ranging from 4 to 8 ounces, while lengthening their leader to as much as 20 feet.

Running the plug on wire line is another trick you can try.  Here too the drail goes between the leader and the running line, and the leader will be about 20 to 30 feet long.  Another wire line rig makes use of a three-way swivel.  A tear drop sinker in the 10- to 16-ounce size is dropped about 4 feet below the three-way using a length of 30-pound mono.  The plug goes on one of the other eyes behind 30 feet of 50-pound leader.  This rig would be used in deep water when stripers are holding along a channel edge.

This fall when the stripers start running south along the oceanfront, give deep diving plugs a shot.  They’re effective trolled inside the 3-mile line along the fence in state waters, and they can be used around schools of breaking fish by trolling the edges of the action.  Since the largest of the stripers usually feed close to the bottom, a deep diving plug may make the difference between hooking a big cow or a bunch of rats.