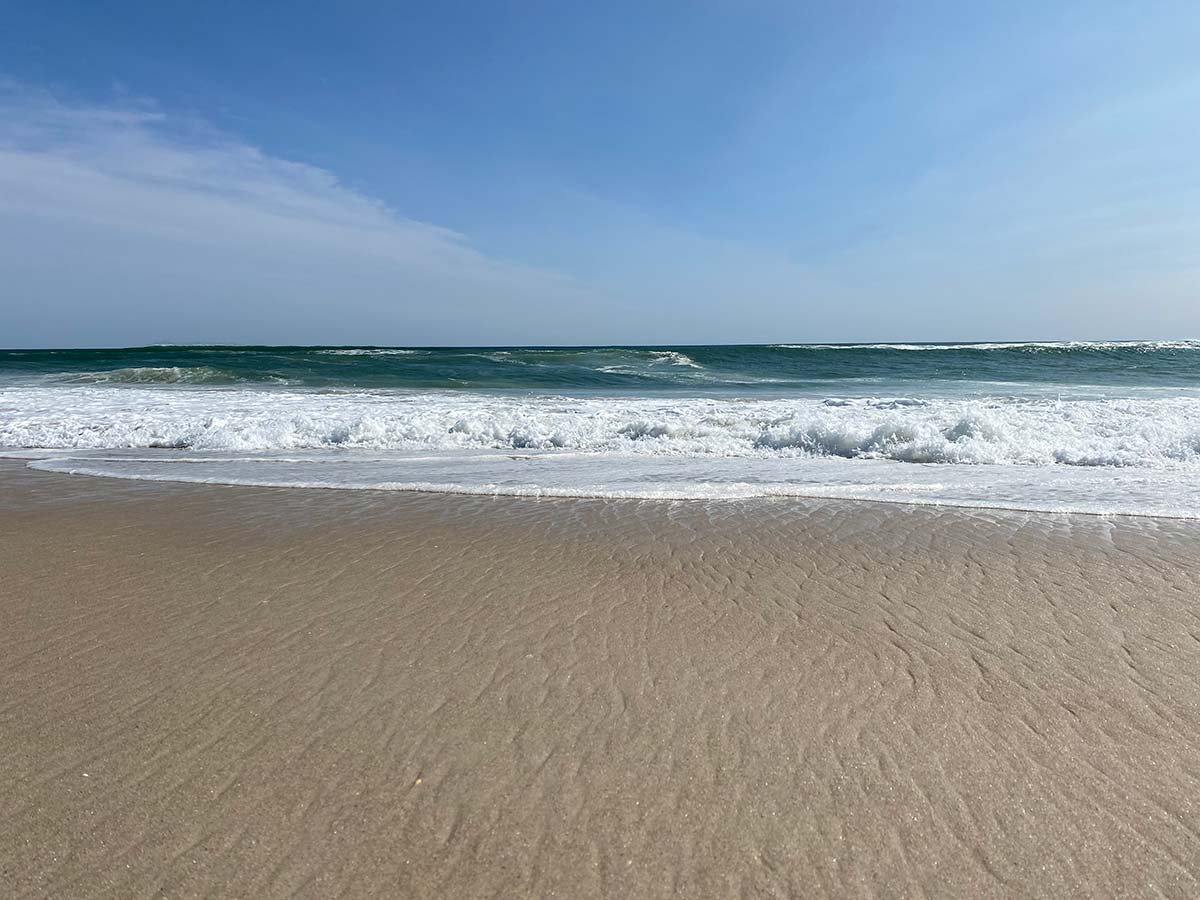 While some get discouraged going into November by the size of the fish around, this isn’t the time to put the rods away yet.

Things are much different than they used to be years ago in surf fishing. I’ve listened to so many stories of how the month of November going into December would always give up cow bass to those who fished for them through the cold, 40- and even 50-pound bass were a possibility. More recently it’s much tougher to pick a quality bass out of all the smaller ones.

Less big fish around? Maybe the larger fish migrate sooner? I’m not sure. I’m still determined though and my drive to fish for stripers continues through November along with many other casters. I always hope for one of those legendary herring runs that used to take place years back. For now though I change my tactics to the class of fish that are around. Usually at some point in November I’m scaling down my tackle to lighter gear. This is when the eight or nine foot rod comes out and I typically don’t use more than 15-pound braid.

When going into November you have multiple options still for catching bass. If the conditions allow me I’ll usually start off by fishing the open beach at day break and sunset. Schoolies are loaded in the troughs of the beach most of the time in November feeding on sand eels. Or at least that’s been the pattern the past few years. Remember to drop to lighter tackle so that you have more fun with it. On these beach trips ill typically be throwing slim profile lures. This includes tins of your liking. I say your liking because we all have our favorites that give us the most confidence when fishing. My personal choice is West End tins, who offer a variety of metals that do a fine job at imitating sand eels. Cast out, let the tin sink to the bottom and slowly retrieve. This is the way Ralph Votta taught me to fish these tins, the owner of this company.  They called this Squidding the beach back in the day. My other choice for these open beach fish in November would be the soft plastic Tsunami sand eel lure. While this lure does not nearly cast as well as the tins, it sure does draw the attention of fish. I’ll use this when it’s flat calm out or close to it. Cast out and let the lure sink down to the bottom. The same retrieve as the tins is what I use. The trick is to keep that lure as close to the bottom as possible. Speed up and slow down with waves just to maintain contact with the lure. This lure does come available in sizes 7 to 9 inches giving you a decision to make. Hands down the winning size has been the 7-inch model for my beach fishing when sand eels are prominent.

While on the beach it is important to look for structure that attracts bass Troughs are your main focus points. These are the deep spots close to shore between the dry sand and the sandbar. The fish will cruise these “highways” looking for forage. I find that the incoming tide is the best time to focus on this piece of structure. Bait like sand eels will come over the sand bar as the tide comes in. The stripers are right behind them on that incoming tide waiting for an easy meal. Sometimes it’s even a good idea to get down to the beach at dead low tide and scout out the beach for ideal spots before the tide comes back in.

I like to bring my phone with me and drop pins on locations that look good so this way when returning to the spot they can easily be found. Of course keep in mind that during this time of the year storms are quite common and can change beach structure quickly. Marking structure should be done again only after storms pass by. If you do happen to come across a body of fish you should have great numbers of them. This type of fishing results in fish almost every cast. The nice thing about fishing the beach with sand eels around also is the fish seem to stick around. Sand eels don’t move as fast as bunker would so the bite will last for weeks as opposed to a couple of days with bunker being the main bait in the surf.

If you do plan on sticking around after dark to fish for bass on the sand try to stay with those slimmer profile lures. A couple I pack into the bag are Daiwa’s SP Minnows and Super Strike Needlefish. Both are great casting plugs that have notoriously taken many fish from the surf. With the Super Strikes I like using the smaller size needle. Either the 1-ounce or the 1.7-ounce depending on the current. Cast out and let it sink down to the bottom. A slow to moderate retrieve with a twitch thrown in every once in a while is the go-to retrieve method for me. For the Minnows it’s pretty much the same method. If you have any current, cast the plug slightly up current and slowly retrieve while letting the current swing your plug. Sometimes when fishing a trough don’t be afraid to cast parallel to the beach. The fish will mainly be sitting in this part of the beach cruising back and forth. Casting parallel at times allows you cover more prime water as opposed to making a cast straight out.

Aside from the open beaches, try to put some time in around the bridges in November. Typically I’ll hit the bridge when the ocean becomes a little too rough to fish with light tackle. Sometimes I notice that the fish stack up by the bridges even more on those windy fall nights. You’d be surprised how many fish hang around these places in the late fall.  Go with a setup on the lighter side for this type of fishing. A little bit heavier than something for the beach though. Mainly because on the beach the fish have nothing to get hung up on, while around the bridges fish always have pilings and underwater snags to wrap around making this a little more interesting.

When focusing around bridges in the late fall my arsenal consists of mainly soft plastics. Small storm shads, bass assassins or any type of finesse baits. These small baits can be worked around the pilings easily. After dark the bridges are an awesome place to stick around. The artificial light cast off the bridge create a shadow line that bass will sit on waiting for baitfish to cruise by. Typically fish will sit facing the current in the dark. Baitfish gather in the lights and it’s an easy meal for the bass. My main method to fishing this is real simple. Cast uptide into the lighted area with a jig light enough to drift into the shadows. Let the current swing the lure towards the bridge. I like to incorporate twitches along the way too. Hopefully the bass will identify your lure as a baitfish that was ignorant enough to make its way into that darkness and that’s when you will get your strike.

One reason why I believe that fishing inside the bay on a windy night is more effective is because when the water is more turbulent. That makes it more difficult for a bass to tell the different between a lure and an actual baitfish. I’ve had banner nights fishing the bridge when it’s blowing over 25 mph. It can be quite chilly but the fishing can be red hot. Also don’t overlook the possibility and tangling with the bigger fish during this month at the bridge. While not as common anymore, some cows do stick around into the month of November and will set up at the bay bridges feasting on some last minute meals before their migration resumes.

While some get discouraged going into November by the size of the fish around, this isn’t the time to put the rods away yet. Just keep in mind that only a short time after the beginning of the month the possibility of snowfall can definitely be in the forecast and while this isn’t always the end of the season according to years past, it definitely slows the fishing down significantly. I do like to get in as much fishing as possible before this because come the winter I’ll be dreaming and wishing im catching striped bass in the surf. Even if they are only schoolies, it beats laying on the couch.