Each fall as water temperatures drop significantly, walleye will leave their deep water haunts and follow bait fish up into the shallows. This leads to the classic late fall bite, with conditions setting up your best chance for landing the year’s biggest walleyes.  This is the period that should be on the New Jersey angler’s bucket list!

Prime locations for encountering these bruisers are any shallow areas where current flows into the lakes fished. For example culverts draining rain water into Greenwood Lake, or creeks leading into areas such as North Creek or Belcher Creek.

Natural choke points are ideal for intercepting these green ghosts, be it the Wanaque River feeding into Monksville Reservoir, or the inlets around King Cove at the southern end of Lake Hopatcong. Hopatcong is also legendary for its many points that allow close deep water access that walleye use as travel routes between deep to shallow feeding areas. These areas are ripe with the correct surrounding structure needed to hold both bait fish, and those predators that are ready to fatten up for the lean winter period to come.  The Delaware River, Cannistear Reservoir, and Big Swartswood Lake are also good spots to search out big walleye.

As far as how one would lay out a successful plan to catch these large eyes and what bait and equipment is needed to achieve the goal, we’ve gone to the master himself, Keith Kavajecz, a “Legendary Angler” inductee into the National Fresh Water Fishing Hall of Fame.  Kavajecz and his fishing partner, Gary Parsons (also a 2001 Hall of Fame inductee), both left lucrative private sector jobs in order to be able to devote their lives to fishing. Together they helped develop the first Deep-V fiberglass walleye boats that are the standard for rough water walleye fishing.

Kavajecz, a former computer systems analyst and programmer, implemented LCD Style depth finders and GPS plotter screens allowing you to “find the fish first” then “stay on the fish.“ Together with Parsons he developed “trolling deep water structure with crank baits”; “open water trolling” and a host of other techniques that they readily shared with other walleye anglers.  Kavajecz has been instrumental in educating fishermen as to what crankbait actions and attributes are best suited to trigger walleye bites, and both had a hand in developing in-line trolling boards, and snap weights for getting baits down to the correct depth.

As members of the Berkley Pro-staff, they have over the past decade assisted in research and development of several new walleye baits that are phenomenal in attracting vicious strikes from trailing walleyes. To date some of their most successful innovations are the Berkley Flicker Shad and the Berkley Flicker Minnow.  Both baits come in a wide assortment of colors and sizes and can be slow trolled at 1.5 to 2.5 mph to produce the right amount of “rolling action, bait profile and side flash” to entice a walleye. I’m prone to sticking with sizes 9 to 11, in firetiger, yellow perch and lime chrome, trolled on Sufix lead core, with a 15-foot shot of 12-pound Seaguar fluoro leader.

Two to three colors of lead core, will get down in the 16- to 20-foot depth that I want to seine when trolling close to points prior to dusk. Kavajecz advises that you keep the 7-1/2-foot medium action rod in your hand, rather than in the holder so that you can “feel the bait work.” If you feel it ticking structure get ready; as the bait hits and then careens off of the structure; “that’s all it’s going take to have a trailing ‘eye to nail it,” he said.

When working deeper water of 25 feet or more, use a line-counter baitcasting reel spooled with Berkley Ultra 8- to 12-pound Crystal line, let out the amount of line dictated by Precision Trolling Data (www.precisiontrollingdata.com).  For precise placement of the lure you’re using, clip on an Off Shore Tackle Planer board, place it in the water and let out another 50 to 75 feet of line. Put this rod in the holder and repeat sequence for the other side.

You can run the leadcore out the back and hold the rod in your hand. Kavajecz advises that you “work the bait, surge it forward, pump it, or stall and kill it” to entice a bite. A 12- to 15-foot leader will work well in the situation.  Always have a suitable net ready – with a taped flashlight attached the fore end to illuminate the water at nightfall – in order to scoop up your prized walleye. Once you start catching fish, and have found the correct depth and speed, make sure to hit “Mark and Save” on your fishfinder to replicate your success. Constantly check your baits for weeds and carry a good set of needle nose pliers for correcting wandering baits that aren’t running true.

In the fall of 2019 Keith Kavajecz, John Hoyer and Bill Shimota appeared on The Next Bite fishing program (www.thenextbite.com) which has been hosted by Parsons and Kavajecz for the past 16 seasons.  Through it they teach fishermen the best ways to fish for walleye, pike, muskies and lake trout. The aforementioned program was only the second night time adventure ever filmed, and its purpose was to put the finishing touches on a newly released bait, the Berkley “Hit Stick.”

Always thinking towards the future, Kavajecz worked with Parsons and Berkley researchers to develop a new bait that would replace older balsa type presentations. Walleye anglers were dismayed at the constant broken balsa baits that were destroyed when bitten by toothy critters, and the annoying lip breakage that occurred if banged against a rock or dock during an ensuing battle. Wanting a bait that could put up with the rigors demanded by such endeavors, they worked with Berkley designers to create a super walleye lure.

Well aware of why fish are attracted to some lures over others, Berkley engineered a bait that puts out the right amount of “roll & flash” to attract fish from a distance. Wanting a lure that could be trolled from a boat as well as cast a long distance from the shore – not exactly doable with a light balsa type bait – Dan Spangler came up with the new “Flash Disc” technology, that not only allows for much further casts, but also acts as a keel; making the rolling, tail wagging trolled lure irresistible to heavyweights. The new Hit Stick is nearly indestructible, it’s heavy poly carbonate body means you can cast it 60% farther than balsa alternatives and will keep its form, even after a walleye sinks it’s teeth into it. It’s best to use a 6-1/2- to 7-foot medium action spinning rod or baitcaster for night time casting.

After several seasons of research and development, the Next Bite team has come up with a real winner. During their night on the water, the team brought in one big walleye after another, slow trolling the Hit Stick at 1 to 1.2 mph. They fished close to shore in 6 feet of water and picked off lunkers as the fish came up shallow to feed in the cold November rain. One after another John, Bill and Keith caught and released some real porkers, the majority of which came on size 11 to 13; firetiger and yellow perch lures excelled.

If you’re looking to give it a go this fall and winter on New Jersey walleye, the baits were just released for the fall of 2020. 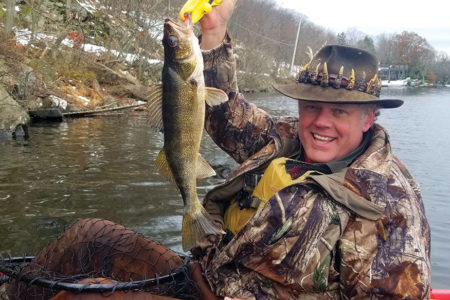 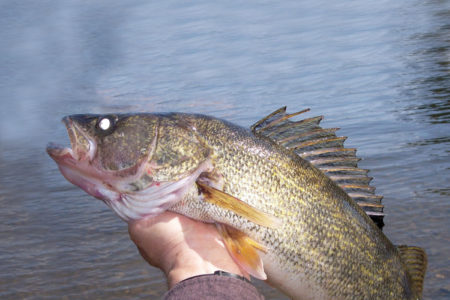