Like all fishing tactics, the best fisherman knows exactly when and where to apply the proper strategy in order to obtain paramount results. Casting for fluke is one of those tactical approaches used by some anglers some of the time, and others habitually.

Those who employ the application regularly and study each facet, can truly take casting for summer flounder to a scientific level, therefore bringing more doormats to the landing net.

Fluke fan-casting yields the most success when baits are tossed up into the tide or current. Essentially, anglers want to twitch the presentation back to the boat drifting in the same direction as the initial cast. If the current, wind, or tide is causing too fast a drift, the bait will arrive under the boat much quicker than when the drift is lethargic. Slow drifts, which are more favorable, keep the bait in the feeding environment for more time.

Of course, when the offering is straight below the vessel, it is time to reel up and fire off another cast. The concept works especially well because the bait is falling back into the keen eyesight of fluke facing into the current and waiting for a worthwhile meal.

Anglers want to use the least amount of weight for their bucktail, jig or rig so it barely brushes the bottom while trickling back toward the vessel. When fluke grasp the presentation, it will feel very subtle, perhaps subtler than any other type of fluke strike you may have grown accustomed to. This is due to the dynamic approach involving a bait and boat literally moving toward each other. The “feel” of the take can take many outings or years for fishermen to become familiar with, but once you get the hang of it, the results are tremendous.

When casting on open ocean waters of course, you’ll need to modify your approach. Obviously trying to cast around completely intact ships with high relief is a daunting task that only results in lines getting cut off repeatedly. Structure that is best-suited for ocean fluke casting includes low relief, hard bottom or debris. Artificial reefs that have well-placed tires, concrete, reef balls and other broken down materials are perfect.

Northern waters that may be ripe with glacial remains of limestone, sandstone, boulders and rock are also low-lying in nature and are ideal for this approach. Anglers can heave their lines as far as possible and slowly work the bait back to the boat allowing it to touch bottom just enough to know that they are in the strike zone. Moreover, some casting experts don’t even want their jig to hit bottom, honing their approach so well over time that they can study the conditions and cast the right amount of bucktail weight that keeps the presentation 1 to 5 feet above the ocean floor. Fluke often explode from the bottom to snatch the offering; truly impressive hits that take quite a bit of time and effort to produce on a regular basis.

I remember an outing where I was fishing with a couple friends at the Shrewsbury Rocks off the North Jersey coast and watching a shirtless man fire his Gulp! grub 40 yards into the current, only to place the rod in the holder in order to kick back with a cold beverage. By appearance alone, we didn’t expect to see much rod-bending, yet one by one, he landed a fluke between 4 and 9 pounds. As he and his buddy were about to depart with a limit, they cruised by us and explained how that 1-ounce jig and pink shine 6-inch Berkley Gulp! grub never touched the bottom, but merely floated above it. We had a decent catch that day, but give credit where it is due. It was neat to watch the clinic take place.

Casting in the backwaters also produces creels of big fluke. The same fundamentals apply, but due to the shallow water, anglers can fan-cast more parallel to the boat in addition to upstream. And the biggest attribute is that there are seldom the same levels of snags on sand and mud bottom. Granted this will also result in quite a few more throwbacks amongst the catch.

Anglers should focus their casts to the channel ledges or potholes on the flats that are traditionally known to hold keeper fluke. At the top and bottom of the tide, the boat will come to a crawl or a total standstill unless there is significant wind. This is a great time to summon your inner Mike Iaconelli and cast away.

Having fished along plenty of beaches, banks, bridges and jetties as a child between family boats, I remember most anglers lacing a pyramid sinker to their fancy fluke rigs. And while they caught, anglers are more apt to cast and retrieve their offerings. Synthetic baits such as Gulp! have been instrumental in the cast and retrieve evolution due to their high rate of effectiveness, relative ease to store and simplicity to employ. Gulp! with any sort of twitching tail adds an element that fluke can’t resist when bounced across the bottom.

It’s important to note that as you slowly retrieve bait by bank or by boat, adding erratic and twitchy movements with the rod tip allows your bait to jump off the bottom like a fleeing or injured organism just perfect for fluke lunch. Looking at some of the hardcore underwater video footage from folks like John Skinner (search John Skinner Fluke on YouTube if you’ve not seen it) you’ll find that fluke chase, taste and even analyze a presentation over sometimes serious distance. That’s why it’s always imperative to create the best possible bait appearance down on the bottom. Some sharpies prefer to twitch and jig with the rod low and close to parallel to the water, give or take a few degrees. 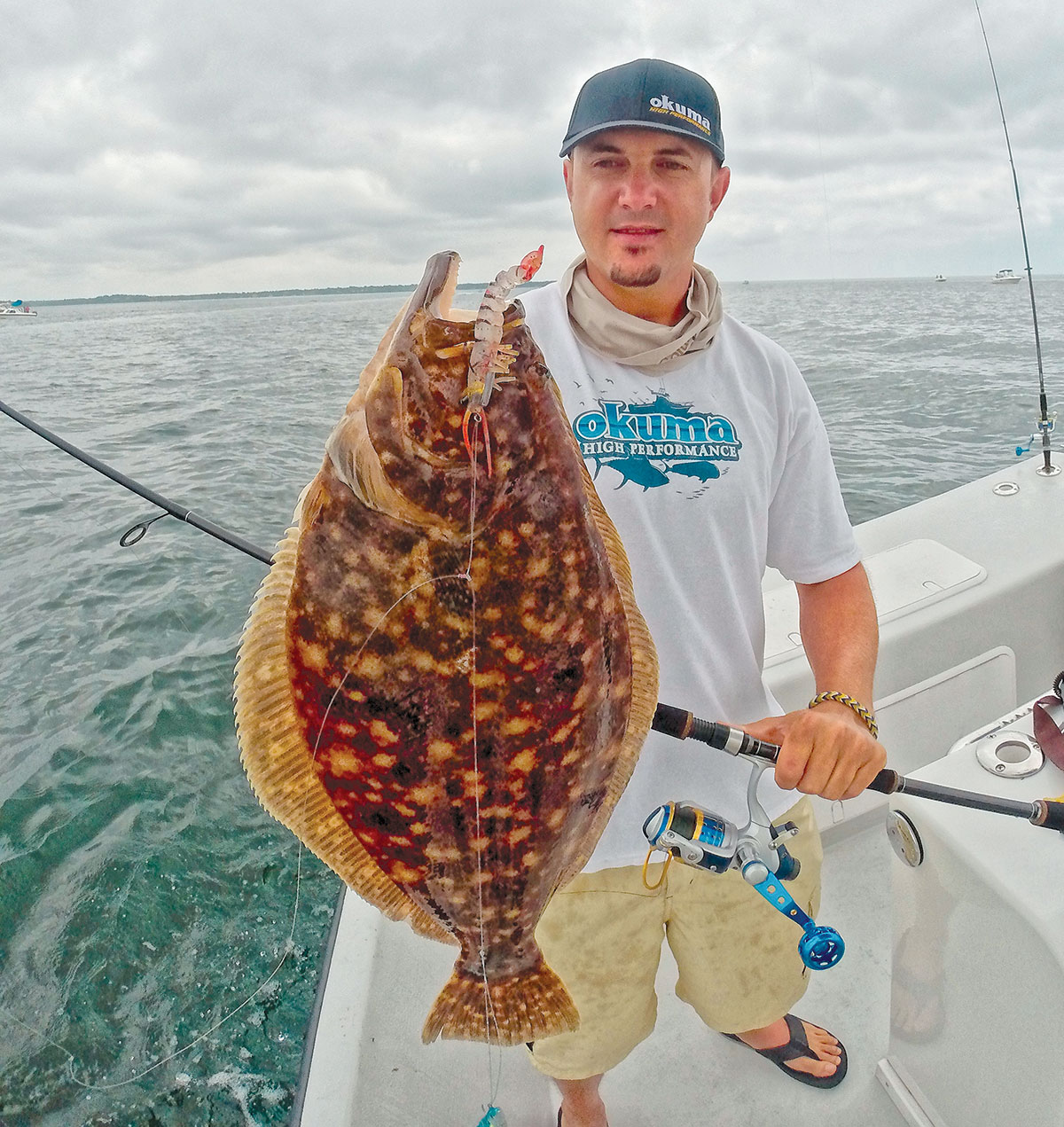 I’ve also observed some of the finest charter captains cast and jig the presentation back to the boat with the rod positioned close to straight up. Whatever rod attitude anglers take, it’s all about getting it zoned in.

Casting various live baits also works well. Minnows, mullet and live spot—if you can get it—are hardier than peanut bunker or baby blues, and they produce on the cast. Anglers should occasionally check around the hook to make sure the hole doesn’t get so wide in the fish’s snout that they lose a prized bait. Repeated casts create this effect. Again the retrieve should be slow, and although these are hardy baits, be careful to not overly pulse the offering or it will drastically shorten its life on the end of the line. Carefully cast and dragged along, live bait produces results the same as it has for many decades.

So whether you are a private boat, party boat pool-seeker, beach bait-bomber or jetty jock, casting is a tactic that keeps you active, can get you through slack water, will help you beat wind against the tide, and most assuredly helps put fillets into the Ziploc bag. Learn the technique and keep it in the flatfish arsenal.