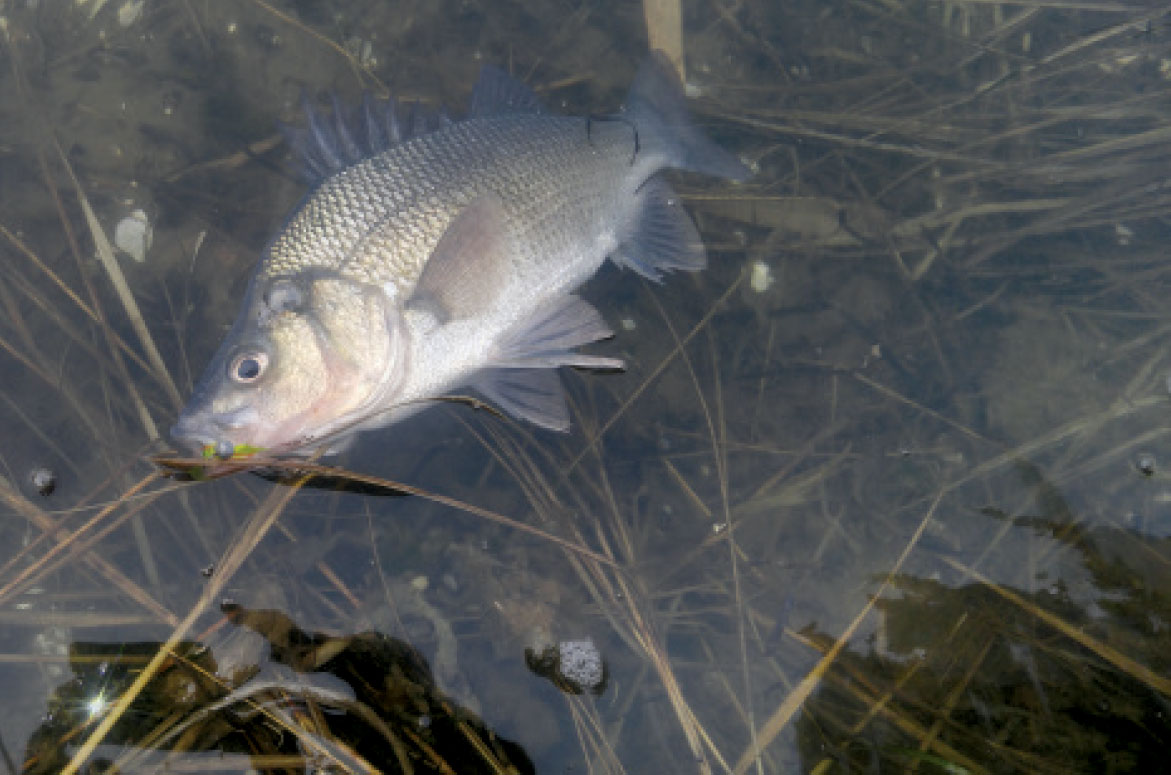 It happens every year. I’ll be talking to someone at a regional show. More than a few times I hear the same thing. It usually goes something like this. “I can’t wait for the bass to show up; I’ve got a bad case of cabin fever.” That statement is usually followed by me explaining that there is ample fishing opportunity around the island. Then they say how they don’t like cod fishing or going out for mackerel. I proceed to tell them about our awesome winter fisheries. Almost all involve fishing in freshwater or tidal creeks. Hunting for sea-runs sometimes finds us more determined and committed than we are bass fishing. The winter is a good time to catch carp. These fish fight great, jump if caught in shallow water, and hit weights that many hard surf anglers don’t hit during the course of a season. When we get a semi warm spell and the ice comes off the ponds, throwing tiny jigs or fly-fishing small nymphs can get you 50-fish days. These fish include but are not limited to bluegills, pumpkinseeds, largemouth, pickerel, crappie and yellow perch. A few of our lakes also have walleye and smallmouth. One also cannot forget the great Conny. The trout fishing is quickly climbing back to the way it was before the NY state fiasco.

While all the above mentioned fisheries are great, it’s the white perch I find myself going for the most. White perch are perennial favorites of mine. They provide plenty of angling opportunities across the island. This fish is another species, like the sea-run trout, that have a dedicated following. These fishermen, for the most part, keep a low profile. A lot of anglers think of white perch as tiny palm sized panfish. While there are lakes like Lake Ronkonkama that have large populations of small perch, we are going after them. Perch reaching weights of over 3 pounds are our “trophies.” A 2-pound perch is a large but not uncommon catch. In some spots I fish, it could be the norm. Another plus with white perch, and I’m a bit hesitant to say it, is that they taste great. This is the reason that perch fishing is not easy. They are not migrating fish. The fish in Carmans River for the most part stay in the river or just outside. I feel this holds true for almost all areas. I’m sure there is some traveling between close, adjacent creeks. I don’t think they routinely travel miles in the bays or sound. I have seen how angler pressure decimated onelong-time hotspot, Sunken Meadow. It went from a consistent perch spot to a place I rarely go. Word got out. People came from everywhere to fish it. The banks had a lot of people with bait and buckets and it just couldn’t hold up with that many fish being removed. If you find fish it is in your best interest to practice catch and release. Keeping one or two once and a while won’t hurt, but keeping everything you catch, will. My longtime fishing partner Bobby and I have a couple of spots that almost nobody knows about. We won’t keep a fish until March. Then we will only keep one or two. The perch fishing at that spot has been going strong for 20 years because of that practice. The sizes at these spots are way above average, too.

You can find perch all over the island. I have personally caught them from Oceanside to Montauk on the south shore, from Northport to Mattituck on the north shore and Riverhead in between. Finding them is a bit challenging. In tidal creeks, the ones with a good amount of freshwater entering at the head usually have a better chance of fish. Our major rivers, NIssequogue, Connetquot, Carmans and Peconic all have perch. These are large in comparison to our typical tidal creeks and pinning down the perch in these estuaries can be trying. If you go to a likely spot and it doesn’t produce, keep trying. Perch will travel distances in a particular area searching for food. Grass shrimp and killies or other small baitfish are the usual prey and they will travel in schools looking for them. They have a habit of traveling with the tide. When you do find one there are certainly more. Many perch sharpies like to use bait. Decent sized grass shrimp are the number one bait. Trapped minnows and dug worms are second and third. Suspend the bait under a float so it drifts along near the bottom. You can also use split shot and fish bottom. Small hooks and light leaders help your catch ratio. The preferred line to use for all perch fishing is 2- to 4-pound test. The edge goes to 4-pound for bait fishing. Many guys will get their shrimp when plentiful before the season is in full swing. They can be found in the winter, but not easily. Bulkheads, docks and pilings are potential spots. A small meshed net run against any of these should produce. Small minnows can be trapped in the upper reaches of many creeks that hold perch. An open can of seafood blend cat food inside a minnow trap is a good choice to attract the baitfish.

There are some perch fishermen who fish artificials only. I am among them. I love throwing small marabou jigs to perch. One can catch perch on small swimmers such as a 2-inch Rapalas. Spinners also work. Marabou jigs out produce any other artificial hands down. They allow you to work near the bottom, especially a bottom with varying depth. Jig weights from1/32 to 1/16th ounce is standard. You could go up to 1/8th and still catch a few, but they prefer the smaller, slower moving jig, especially in the winter. The 1/8th ounce just comes in too quickly for me. The same weight jigheads with very small grub tails also work but I find the marabou jigs are better.

Another option is to combine bait with artificial. A few sharpies tip jigs with grass shrimp or minnows. This is very effective and a good choice for first timers. Just hook the shrimp so that it rides in line with the jig. Minnows get hooked through the lips.

A light 4-1/2- to 6-foot spinning rod rated for 2- to 4-pound test is ideal. A matching ultra-light reel with a good drag rounds out your outfit. I prefer 2-pound braid for perch fishing. Nanofil is the most readily available light line braid. It also comes in 3-pound test, which is a nice compromise for those not crazy about 2. That braid is then tied to 2- or 4-pound fluorocarbon via double uni-knot.

When it comes time for fishing, incoming tide works best for me. The last of the incoming is the best in many spots. The perch move up with the tide reaching the upper sections of creeks and rivers near the top of the tide. I usually do not find decent perch in water shallower than 3 feet. Finding the first deeper spot as one heads downstream from a spillway and fishing it as the tide rises is a good option. I do most of my perch fishing from November through April. Some spots are better early and some, like Riverhead are best in April. I have also noticed over the years that in many streams the alewife run coincides with good perch fishing. Back when trout season opened on April 1, we always had good perch fishing during that time frame. It’s something to keep in mind. Perch can be hard to get to hit at times. I’ve cast to areas I know had fish and gone hitless. Sometimes all you need is one to hit and the rest suddenly get hungry. I’ve also caught them at a spot and went back the next day on the same tide and went hitless. They can be a bit frustrating at times, but when you get into them with the ultra light tackle, it will put a smile on your face.

There are a few other species you might encounter when perch fishing. The most common is striped bass. The stripers are sometimes so plentiful that they are a hindrance to perch fishing. Last season we had trips with over thirty bass while targeting perch. For the most part, these bass range from 2 to 4 pounds, however, some bodies of water to hold better quality stripers. My partner Bobby and I have each landed bass that weighed over 20 pounds while perch fishing. These catches are a rarity and the direct result of countless trips over 30-plus years. And yes, we did land these fish on 2-pound test, in part thanks to them being sluggish in the cold water. Bass will hit in freezing water. I’ve taken bass in creeks so cold they were half covered in ice. Sea run trout are another welcome by-catch.

If you are interested in targeting white perch, check with your local tackle shop for locations in your area. I know Frank at Chasing Tails in Oakdale is adept at the perch game and I’m sure he wouldn’t mind setting you up with the right tackle and giving you some tips. Who knows, he might even part ways with a few of his coveted shrimp. 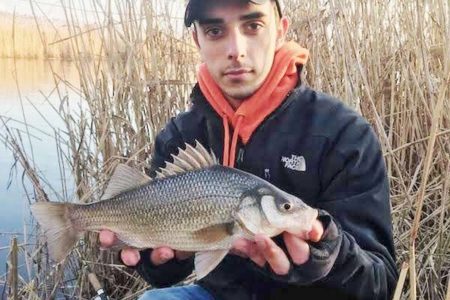 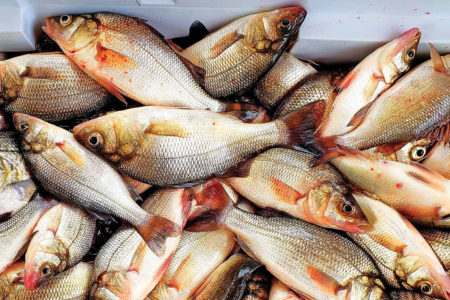 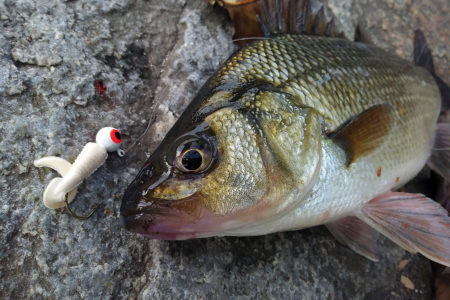