The potential proliferation of wind farms off of Long Island’s shores has generated considerable debate among residents, and especially among those who live, work and play along its shores. The vast majority recognize the need for clean energy sources, but some are concerned that these projects bring with them too many unanswered questions related to their impact on the marine environment.

There are many fishermen who welcome the addition of these structures to our offshore waters. What angler doesn’t understand that structure and good fishing generally go hand in hand? They point to the oil platforms in the Gulf of Mexico that yield some outstanding fishing opportunities to anglers in that region. Would these wind platforms be any different in their appeal to species like blackfish, sea bass and scup? The unique marine environment created around these structures will certainly draw pelagics like tuna, sharks, mahimahi, billfish and wahoo to those projects located in offshore waters. 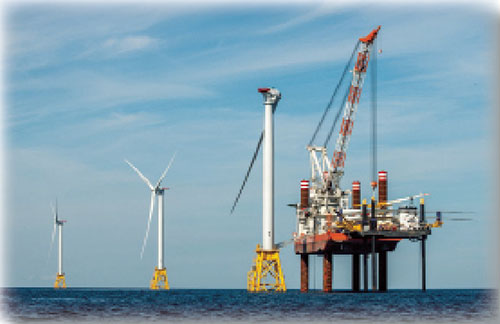 But even given the obvious fish attracting benefits to wind farms, some of these same anglers also share concerns about these offshore windmills. Some wonder how the construction process will affect marine life in the area, and access to these areas. The recently approved plan for Deepwater Wind to construct a wind farm 30 miles offshore of Montauk includes a section of Coxes Ledge, which is home to many groundfish species, and according to some also serves as a spawning area for cod.

We are told access will not be an issue once they are constructed, and while some Montauk skippers have not had an issue with the five windmills located southeast of Block Island, at least one boat captain at an MRAC meeting earlier this year said that he was instructed to move away from one of the structures by the coast guard. Limiting access to these areas would certainly be a major concern if that turns out to be the case. As an aside, those five windmills provide all of Block Island’s electric power, while the left over is used to service parts of the Rhode Island mainland. The Montauk project is expected to produce 90 megawatts of electricity through 15 turbines, enough to power more than 50,000 residences along the South Fork.

Some wonder if the vibrations and electric current generated by these huge fans could have an effect on the migration and movement of some species, and also on sea going mammals like whales and porpoises? One of the biggest complaints I heard when discussing the topic at shows this winter was very simply that people do not want them to be visible from shore. That will not be an issue with the South Fork Wind Farm, but a proposed wind farm 12 miles off of Jones Beach will certainly be visible at times. Haze, smog and rain might shield them from view at times, but when visibility is good, there is no obscuring these 500 to 600 foot tall structures that sit atop steel platforms well above the ocean’s surface.

If you believe we need to reduce our dependence on foreign oil, and need to reduce our dependency on fossil fuels, then the need for clean energy might outweigh some of these concerns. There are proponents of wind power who believe land based turbines would be just as efficient and less costly than offshore wind farms, and other green energy proponents who believe we should be more reliant on solar energy. However it plays out, the number of wind turbines off of our shores is certain to increase over the next few years, and maybe then we will have the answers we wish we had now.