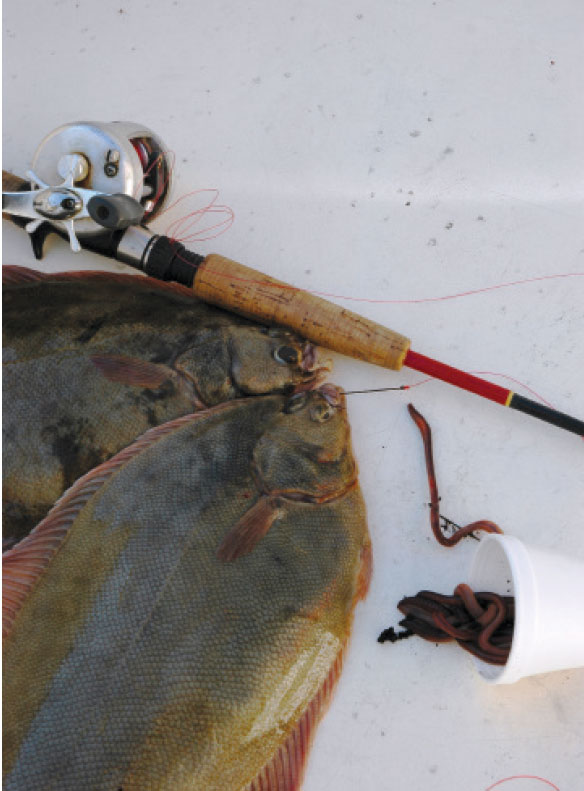 Considered by many as a freshwater bait, earthworms are at times as effective as sea worms on inshore favorites like flounder, weakfish and striped bass.

It’s a fact that earthworms, more commonly referred to as “nightcrawlers” because of their nocturnal habits, are basically employed as a freshwater bait for the likes of trout, largemouth bass and panfish. Few anglers even give a thought to soaking these same baits in saltwater, yet they can be surprising effective, and at times even more effective, than more traditional saltwater baits for species like flounder, weakfish, stripers, sea bass and porgies. Even fluke have fallen to bucktails tipped with a nightcrawler.

For me, my introduction to using nightcrawlers (lumbricus terrestris) came at a young age when I began freshwater fishing. Growing up in Brooklyn, I frequently fished Prospect Park Lake, using nightcrawlers because they were easy to harvest from an empty lot near the park. Then I began searching out several small lakes on Staten Island, continuing my use of nightcrawlers, mainly because they were cheap to come by when I was unable to catch my own. Eventually I expanded my fishing territory to the Sheepshead Bay area, catching flounder right from the docks from March into early May. Not always having pocket money to buy the more expensive blood or sandworms, I “resorted” to nightcrawlers and hit pay dirt with them. From there, my affliction with saltwater fishing blossomed, going from party boats to piers and then to the surf.

With my discovery of saltwater fishing, freshwater species played second fiddle to my new found love. There were more opportunities available close to home in the bay, as well as the ocean, and I became very friendly with an old time bayman named Bud Ward. Our very first trip happened to be for winter flounder and as the season approached, the idea surfaced of trying earthworms, along with bank mussels and strips of skimmer clam. Again, the “crawlers” were cheap and easy to come by. Actually, it took only a few flounder trips to prove that nightcrawlers are a very effective bait in the salt, and equally as effective as other marine baits.

Most often, earthworms are purchased from bait shops in a container with a special soil mixture and kept refrigerated. The cool, moist soil maintains the worms’ freshness and ensures a healthy, active bait when you hit the water. Keeping your worms lively is important and when properly cared for they last for multiple trips. Option one is to keep the container in a refrigerator at home, or you can buy a bag of crushed ice and a small cooler. Simply place the bag of unopened ice in a cooler and cover with several sheets of dampened (not saturated) newspaper or burlap. Spread another layer of moistened, shredded paper, and then place the worms on this bedding along with any moist soil. To maintain earthworms for a long period of time, apply a layer of used moist coffee grounds over the worm bed and again cover with the moistened paper or burlap. Finally, cover the entire area with a light layer of moist newspaper. Close the cooler and store in a cool, shaded place away from direct sunlight.

Before flounder season was limited to April and May in New York waters, the late Bud Ward and I fished nightcrawlers along the edges of channels bordering mud flats in the back bays from mid-March to the end of May.

When the flounder began to migrate out of shallow bay areas around the first week of June, we fished deeper locations like the northeast shoreline of the Meadowbrook Bridge, the deep water near the Short Beach Coast Guard Station, and the marshy edges of Reynolds Channel.

After many years of bypassing earthworms for saltier baits, I found myself once again using the worms for flounder fishing. Two angling friends, Moose and Briscoe, who fished Lloyds Harbor quite often, were picking away at flatties in the area and invited me along. We brought along the usual mussels and sandworms, but I also brought along some nightcrawlers just in case. Given the current state of the flounder fishery in recent years, we managed only half-dozen keepers, but it was the earthworms that did the job.

When using nightcrawlers, pass the hook through the worm’s collar then push the point back into the body again to secure it. That should leave a length of the tail section to dangle and wiggle, making it appealing to any hungry flounder in the area. Slowly lifting and lowering your rig up and down will cause the bait to flutter, and also allow your sinker to stir the bottom a bit. Do not cut the crawler into sections as most people do with blood or sandworms. Using the whole worm is vital to success in the case of earthworms. When you feel the taps of a winter flounder mouthing your bait, a slow lift of the rod until you feel steady weight followed by a short jerk should result in a solid hookup. Occasionally, a fish will just be hanging on, or mouthing the worm and will drop the bait. If that happens, quickly drop your bait back and most times the fish gives you another chance.

As I noted earlier, not only can nightcrawlers be used for winter flounder, but other species such as sea bass, schoolie stripers, weakfish, fluke, and even blackfish have fallen to the lowly earthworm. A bucktail tipped with a nightcrawler makes for a mighty tempting offering for fluke and weakfish. Simply slip a worm onto a bucktail jig, and then lightly dance the combo up and down off the bottom in a rapid rhythm. A deadly combo for weakfish for many years has been a nightcrawler slipped onto a small single, fixed-hook Bridgeport diamond jig. Fished near the bottom in the wake of a drifting boat has accounted for many weakfish from small summer-run fish to large spring tiderunners. When seeking weakfish at night, I’ve fished nightcrawlers on the bottom with a three-way rig around West End bridges, including the Meadowbrook, and in the State Channel around Zach’s Bay.

Several worm trollers I know have discovered that nightcrawlers employed behind a willow leaf spinner blade can be as effective on stripers as sandworms at times. A willow leaf spinner-blade and small white plastic tube dressed with a nightcrawler and slowly trolled along a channel edge, marsh bank or along a boulder studded Long Island Sound shoreline is a deadly combination for school size stripers. Rarely have I caught a striper over 10 pounds with this rig, but it has accounted for big numbers. Weakfish have also fallen to this rig while seeking out stripers.

When fishing down south, I have caught quite a few sea bass on earthworms. For some reason, they much prefer the clams, squid and crabs over the worms up here in the Northeast. On the other hand, earthworms have proven very effective on other southern species like speckled trout, grunts, sheepshead, small black drum and saltwater catfish, especially the sail-cats.

Why some saltwater species occasionally shy away from an earthworm, and at other times readily devour these baits, I’m not sure.

Perhaps they become part of the natural food chain as a result of rain runoff into the marshes and back bays. Or maybe it is simply a case of that wiggly action of the bait in the water that triggers a strike. Whatever the case, there is no denying that earthworms, both the smaller garden variety and the larger nightcrawlers, should be included on the bait list for more than a few of our favorite saltwater species. 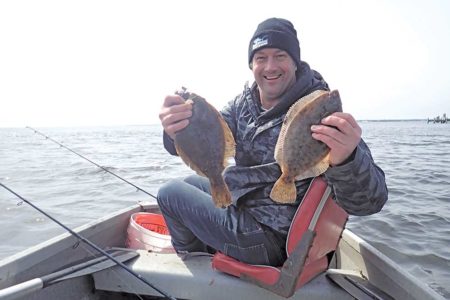 Up your chances of finding and catching a couple of fat flatties this month.