Salmon fishing in New Jersey is beginning to getting more popular as the landlocks get larger.

One would believe that the shattering of a half-plus century-long Garden State freshwater fishing record would suddenly witness angler throngs flocking to the venue as well as other swims where the species is in residence. Not so.

Actually, the rod ‘n’ reel crowds have been growing, not at exponential levels, mind you, but at a pace that is indicative of a cognizance of a jackpot about ready to be unveiled. It’s sort of like waiting for the last pair of numbers in the Power Ball drawing when the first four are printed on the ticket in your quivering fingers; you know you’ve already won something, but there could be a much bigger payoff coming soon. Welcome to New Jersey’s landlocked salmon lottery!

Ed Kazar from Andover Hunt & Fish is essentially the ground zero bait and tackle supplier for the erupting landlocked fisheries in the very close by in Sussex County’s 101-acre Lake Aeroflex in Kittatinny Valley State Park, where the new state record was caught last June 2. “The interest in the salmon started to grow when they (the Bureau of Freshwater Fisheries) started stocking the bigger fish a few years ago,” Kazar said, adding “Before that, hardly any were being caught. The past couple of years, more people started fishing for them, and since the record was broken last summer, it’s been non-stop,” Kazar added.

Runlevy Rodriguez spoon-spanked the new state record in Lake Aeroflex last June, hitting an 8-pound, 5-ounce salmon about 60 feet down.  New Jersey Division of Fish and Wildlife has certified Renelvy’s catch—weighed at Andover Hunt and Fish—as the new state record salmon, breaking the longstanding record, also caught at Aeroflex back in 1951 when it was known as New Wawayanda Lake.  Renelvy’s catch has heaped new attention on waters like Lake Wawayanda (255 acres) also in Sussex County within Wawayanda State Park, and the cavernous 88-acre Tilcon Lake in Allamuchy Mountain State Park in Morris County, which straddles the Sussex County border.

With all the justifiable attention being given to the Bureau’s thriving warm water and cool water fisheries rearing and stocking programs that include walleye, pure strain and tiger muskies, northern pike, hybrid stripers, largemouth and smallmouth bass, and various panfish, the stocking of landlocked salmon had been shot in the arm.

Save for a total “No Killing/No Stocking/No Nothing” of brook trout in compliance with the 2018-and-forever “Brook Trout Conservation Zone” edict and its relaxing of regulations allowing the creeling of “invasive” browns and rainbows on select waters where wild brookies are also found —designed to save and ultimately enhance the populations of this true native Jersey char—little had been done to actually expand the fishing opportunities for salmonids.

Enter the Landlock Shock or, more specifically, the new rearing and stocking procedures a few years ago that made the species more available, more catchable regarding length and weight and, most importantly, far more appealing as a target besides the rainbow trout, the only other salmonid being liberated in Garden State waters since 2015.  However, there is no doubt that the new record came from a Bureau release anywhere from four to five years prior.

Jeff Matthews, the now-retired superintendent of the Pequest Trout Hatchery, was always in search of ways to improve and/or add to New Jersey’s cold water fishing opportunities. For several years, the Bureau had been giving the Massachusetts Division of Fisheries & Wildlife the Pequest facility’s surplus brown trout eggs. In a discussion with the Mass chief of hatcheries Ed Simmons, it was discovered that the Bay State’s Roger Reed Salmon Hatchery had a surplus of yearling 7- to 8-inch landlocked salmon taking up space.

The process was put in motion to swap northern pike fingerlings, which the  state’s Hackettstown Hatchery was producing at a robust rate, for salmon, and in the spring of 2006, 1,400 landlocks were transported from Massachusetts, with 1,000 set free in Lake Wawayanda and the remaining 4,000 in Aeroflex.

During the next few years the numbers of salmon stocked varied, averaging two to five per respective surface acre in Wawayanda and Aeroflex. However, with a 12-inch minimum size, a slow rate of growth, and the fact that the venues’ bigger largemouth bass and pickerel (and in the case of Aeroflex, the bigger holdover trout) feasted on the new arrivals, angler return was scant. Sure, some salmon were being caught, but participation never reached expectations.

However, a couple of changes to jump start interest in the program were falling into place. In 2013, the Hackettstown facility ceased its stripping, fertilizing and raising lake trout fingerlings destined for Merrill Creek Reservoir in Warren County. The impoundment’s existing laker population was reproducing naturally at self-sustaining rate. This freed tanks inside the hatchery building for what was determined could be for landlock fingerlings.

“We believed we could raise the salmon to the minimum 12-inch harvest size much quicker than they could reach in the wild,” explained Hackettstown superintendent Craig Lemon, adding that the new arrivals were fed a pellet diet and when they reached a predetermined size, the protein came in the form of fathead minnows—and lots of ‘em.

“So that first year we held 200 over for the stocking of Tilcon Lake,” Lemon added.  And in late May of that year, 720 salmon averaging 8-1/2 inches were stocked in Wawayanda, with another 280 released in Aeroflex. In April of 2014, the 200-strong Tilcon landlock load ranged between 15 and 20 inches and averaged 2-1/2 pounds.

It’s now an autumn as opposed springtime stocking schedule, and in an agreement with the Massachusetts Division of Fisheries & Wildlife, the landlocks are delivered in the spring as 4- to 5-inch fingerlings. They are placed in the inside tanks, and the feeding begins. Under this “intensive” culture, Lemon and his crackerjack crew are able to produce 12- to 15-inch salmon within one year.

Since the change in the program, some 17,997 12- to 14-plus inch, thick-bodied salmon have been stocked, with the new addition, the 650-acre Merrill Creek Reservoir in Warren County, receiving a dose of 325 last November 8.  Those fish averaged 14 to 15 inches in length, and if successful—and there is every reason to believe it should be—the introduction of the landlocks will fill the niche that was opened with the cessation of the stocking of brown trout in the impoundment.

With the new growing and stocking procedures in place, the sky is nearly the limit.  Because of the habitat-specific requirements of landlocked salmon survival, i.e. cold, deep and well-oxygenated water and a strong, rich forage base of alewife herring and/or shiners, the number of additional lakes and reservoirs is extremely limited.

“Right now, we’re excited at how the fishery is taking off in Wawayanda, Aeroflex and Tilcon. Angler feedback is very encouraging,” said project leader and principal biologist Pat Hamilton with the Bureau of Freshwater Fisheries.  “We’ll be watching the progress of the salmon being stocked in Merrill Creek very closely over the next couple of years. Insofar as other waters that can provide and maintain quality landlocked salmon fisheries, well, let’s just say we are limited to a few beyond those that are already receiving fish.”

A couple to be considered include the 423-acre Clinton Reservoir ensconced within the Newark Watershed property in Passaic County, and White Lake, 65 acres, in Warren County. Stretching things a bit, the 74-acre Sheppards Lake in Passaic County could possibly fit the bill.

The landlocks are managed under the Trophy Trout Lake regulations, minimum length requirements varying as per the respective swim. In Merrill Creek Reservoir, it’s a minimum 15-inch restriction, while in lakes Wawayanda and Aeroflex, and in Tilcon Lake, it’s a 12-inch take ‘em home minimum length.

New Jersey salmon can be caught year-round and are especially targeted under the ice and again from after ice-out through May and again from October right until the ice forms.  This is not to say the warm weather months don’t surrender salmon. Again, it was in early June when Runlevy Rodriguez nabbed that new state record.

Trolling plugs and spoons and drifting live herring and shiners are the preferred and most productive methods, although the landlocks are also caught, especially in the early spring when they are shallow, by casting spoons and spinners, jigging blade baits, and also stripping streamers on an intermediate sinking tip fly line during late April through May.

Through the ice? Instructs hard water wizard Garrett Kazar from Andover Hunt & Fish, “It’s a shiner under a tip-up, or a fathead or small shiner on a 1/4-ounce or 3/8-ounce jig head dropped to the bottom and then jigged slowly up to maybe a foot below the ice. You can see the salmon chasing and hitting the jig. It’s deadly on Aeroflex, Wawayanda and Tilcon.”

To be sure, the landlocked salmon program further solidifies the Garden State as a freshwater fishing Valhalla, given the geographic size and the opportunities it provides. 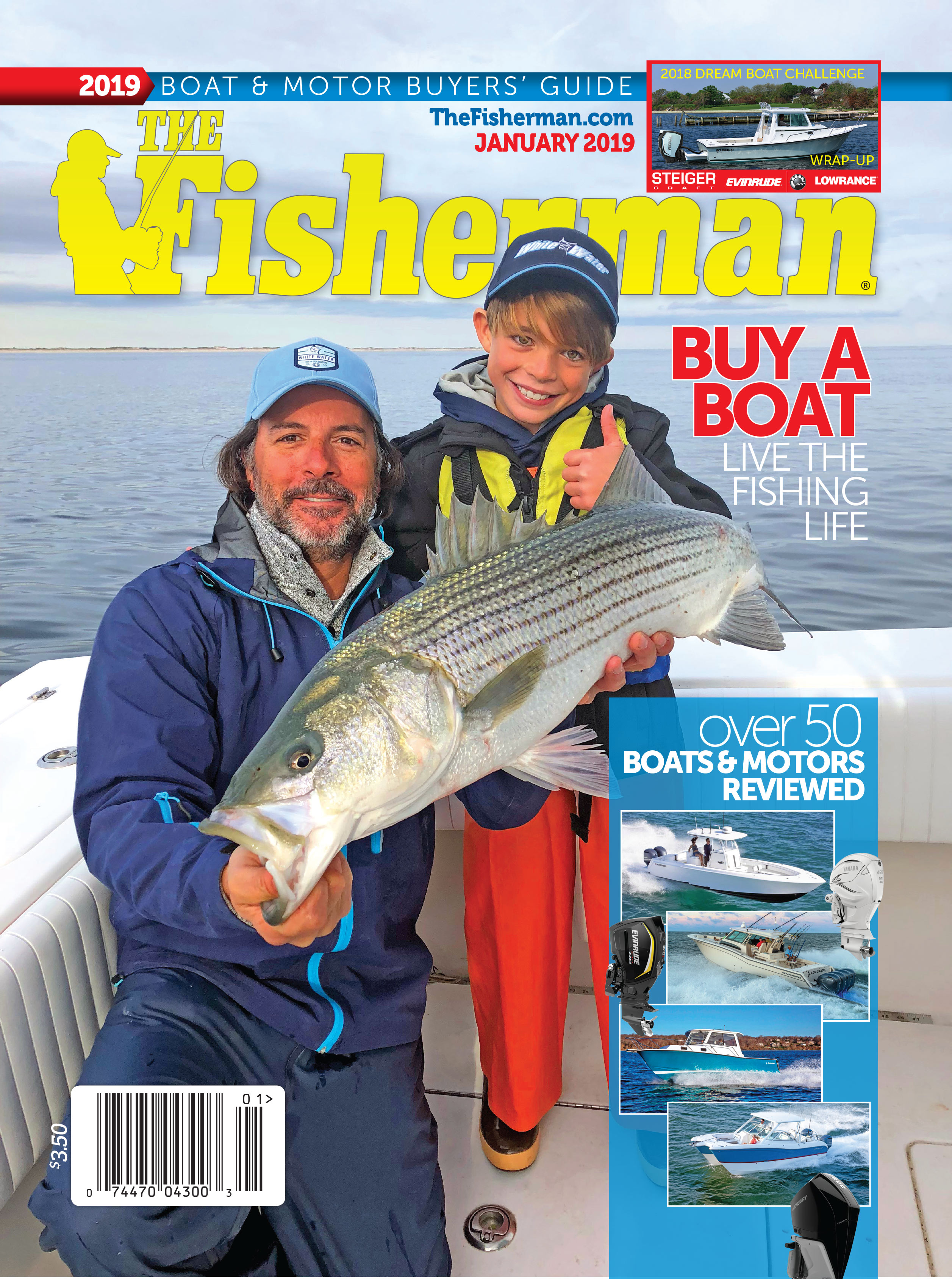 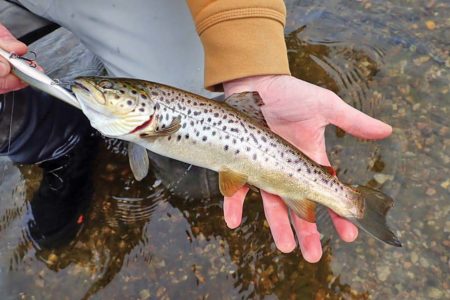 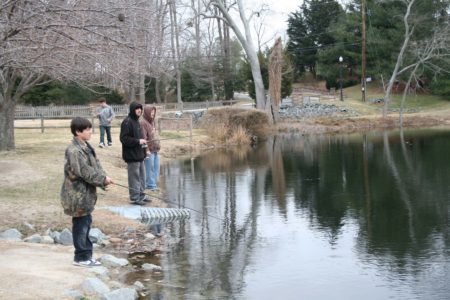