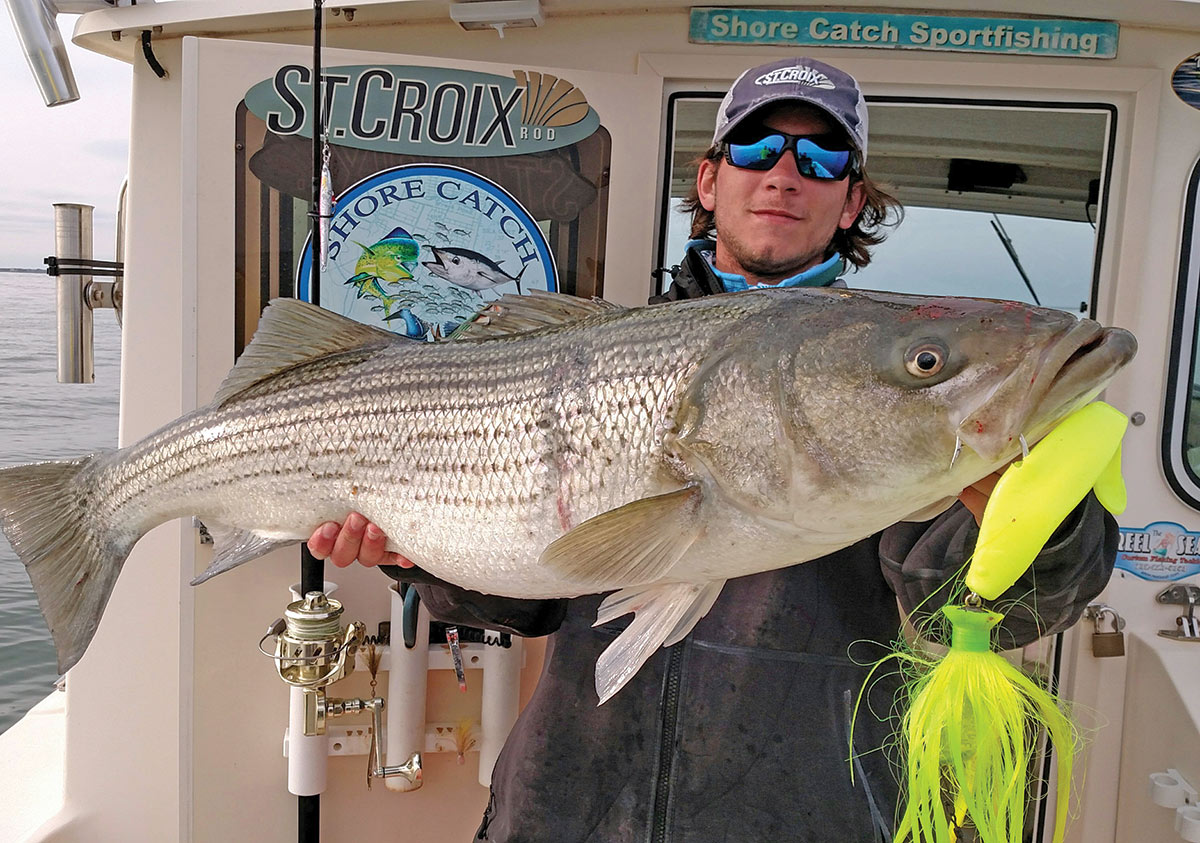 Big game fishing is usually defined as targeting a large species of fish that has sporting qualities. Marlin, swordfish and sailfish no doubt top the list for the so self-described big game hunter, with tuna, sharks and inshore tarpon other highly credible big game targets. You can bet that every striped bass fisherman to ever hit the brine has to consider himself a big game hunter too; that trophy bass, the fish of a lifetime, a first ever 50-pounder is a lifelong quest for anyone targeting striped bass.

Some hit the mark sooner than others; but I think it is fair to say everyone is trying to hit it. To see how big striped bass can actually get we can look at the current world record caught on August 4, 2011 in Connecticut waters by Greg Myerson who boated and weighed in a bass at 81.88 pounds. This striped bass edged out the previous record of 78.8 pounds caught off the Vermont Ave jetty in Atlantic City, NJ during a nor’easter on September 21, 1982 by Albert McReynolds. I’m aware of only one other striped bass caught and verified that exceeded Myerson’s world record, a 92-pounder that was caught in a net by Maryland’s Department of Natural Resources during a research project in 1995.

In addition to the spring spawn, the impetus that brings big, hungry bass into many of our local waters is the arrival of adult menhaden, aka bunker. In May these baits move out along the Jersey Shore and bring decent size bass in the 25- to 35-pound class with them. These bass hang with the bunker for the entire spring run and into the early summer as fish disperse throughout Long Island and into New England waters where anglers also see bass on bunker starting in May as well as them moving out of some of their wintering rivers.

Where I run out of Manasquan along the Central Jersey coast, the 40- to 50-plus-pound stripers make an appearance for only about a week to 10 days.  When I look at my past logs they usually appear around the first two weeks of June; it’s easy to know when they actually arrive as word spreads rather quickly when the first catches are made.  This is the time that the local big game hunter needs to get out there and put in as much time as possible. 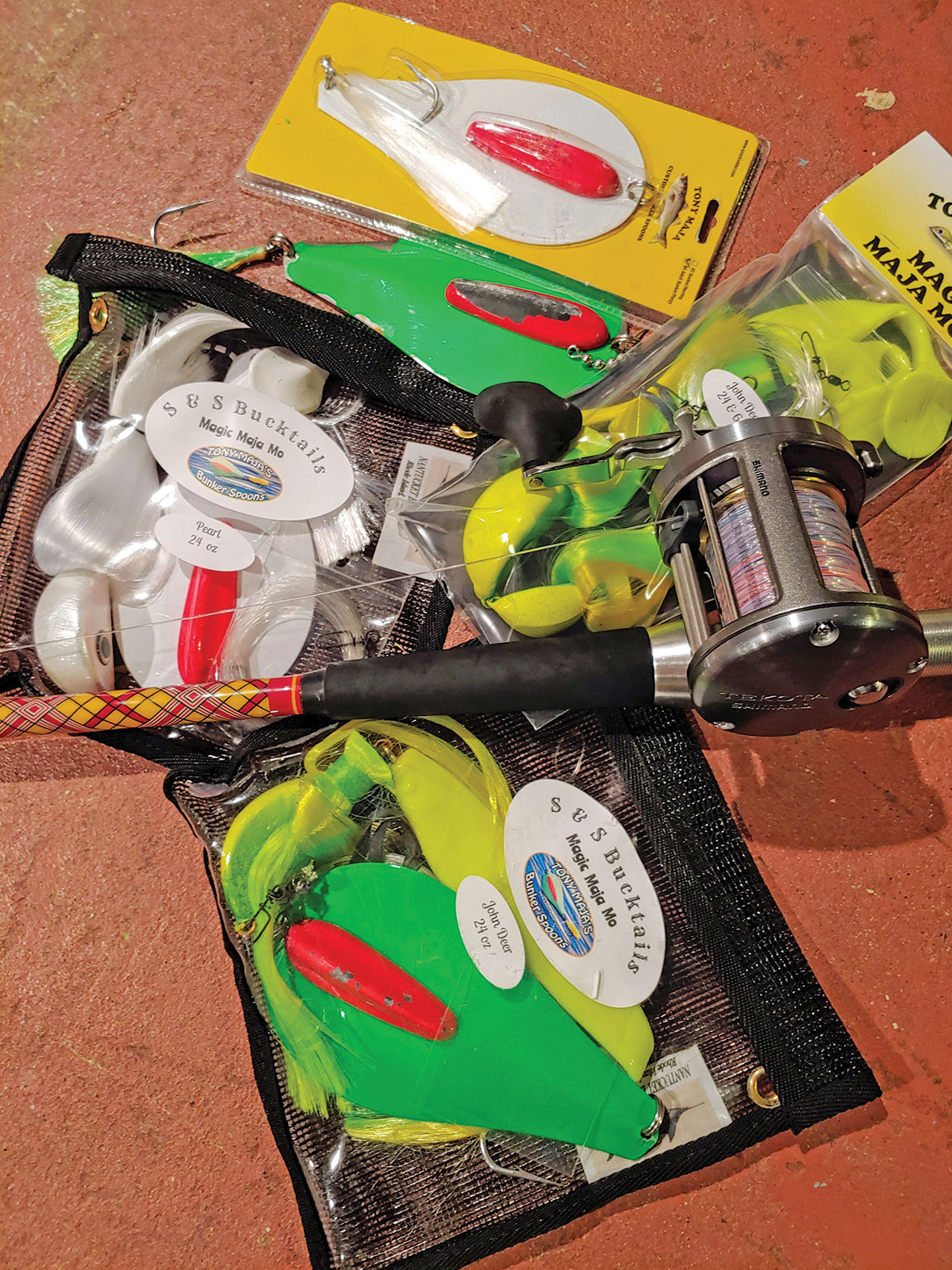 One of the ways to target these trophy bass is by trolling bunker spoons and mojos. Trolling is a highly effective method especially if the bunker concentrations are thin; trolling works best if the bass don’t have a lot to pick from to eat. They are on the move and searching so you need to do the same as you prospect with your spread.

I have caught big bass on both spoons and mojos so I like to run them together in my spread. On any given day big bass will hit one or the other so I always like to have both in the water. My spring trophy trolling spread consists of four rods, two with #4 Tony Maja white or green adult bunker spoons off my outrodders and two Maja Magic Mojos off my transom down the center.

I love the Maja products as they always produce trophy bass. In 2018, there were sixteen 50-plus pound bass caught on Tony Maja Products with the biggest at 55.8 pounds. Fifteen of those stripers came on #4 Maja Spoons and one on Magic Mojos. “Before we started making spoons for the everyday fisherman we watched a bunker school getting blitzed on by bluefish,” said Maja creator, Tony Arcabascio. “One bunker got whacked by a bluefish and was wounded. As we watched that wounded bunker a huge bass came up and swallowed that bunker whole. So we made a few prototype spoons for ourselves that have a shorter sweep and made the spoons to resemble that wounded bunker.”

“They worked so well that we started making them for the public,” Arcabascio said, adding “We also made the spoons so thick they do not bend like some others and lose that action.”

When it comes to the action, the mojos are more forgiving than the spoons and will catch bass at a wider range of speeds than the spoons. So the key to running a combination spread is to get the spoons to run correctly first and then drop in the mojos. Whether you are using wire, Monel, braid with drails, or lead-core it is important to adjust your speed so your spoon rods are rhythmically pumping along.

Back in the early ‘80s the late Joe Nunziato taught me how to troll spoons, telling me, “When the desired speed is reached your rods will be pumping at least 100 times every minute.” Now, I don’t count rod pumps but I know what this would look like. On my boat, a 28 Parker, this action will usually be accomplished when trolling between 3.0 and 4.0 knots. Speed will vary however based on direction of travel, swell, current and wind, so take note of the direction that you are trolling when this desired effect is achieved.

Spoons that are running correctly track from side to side and have about a 6-foot sweep producing vibration and sound that imitates an injured bunker struggling to survive. Going too fast causes the spoons to spin; trolling too slowly and the spoons will not sweep enough. When trolling deep in relatively clear water the orb of light around the spoon is approximately 10 feet in all directions. 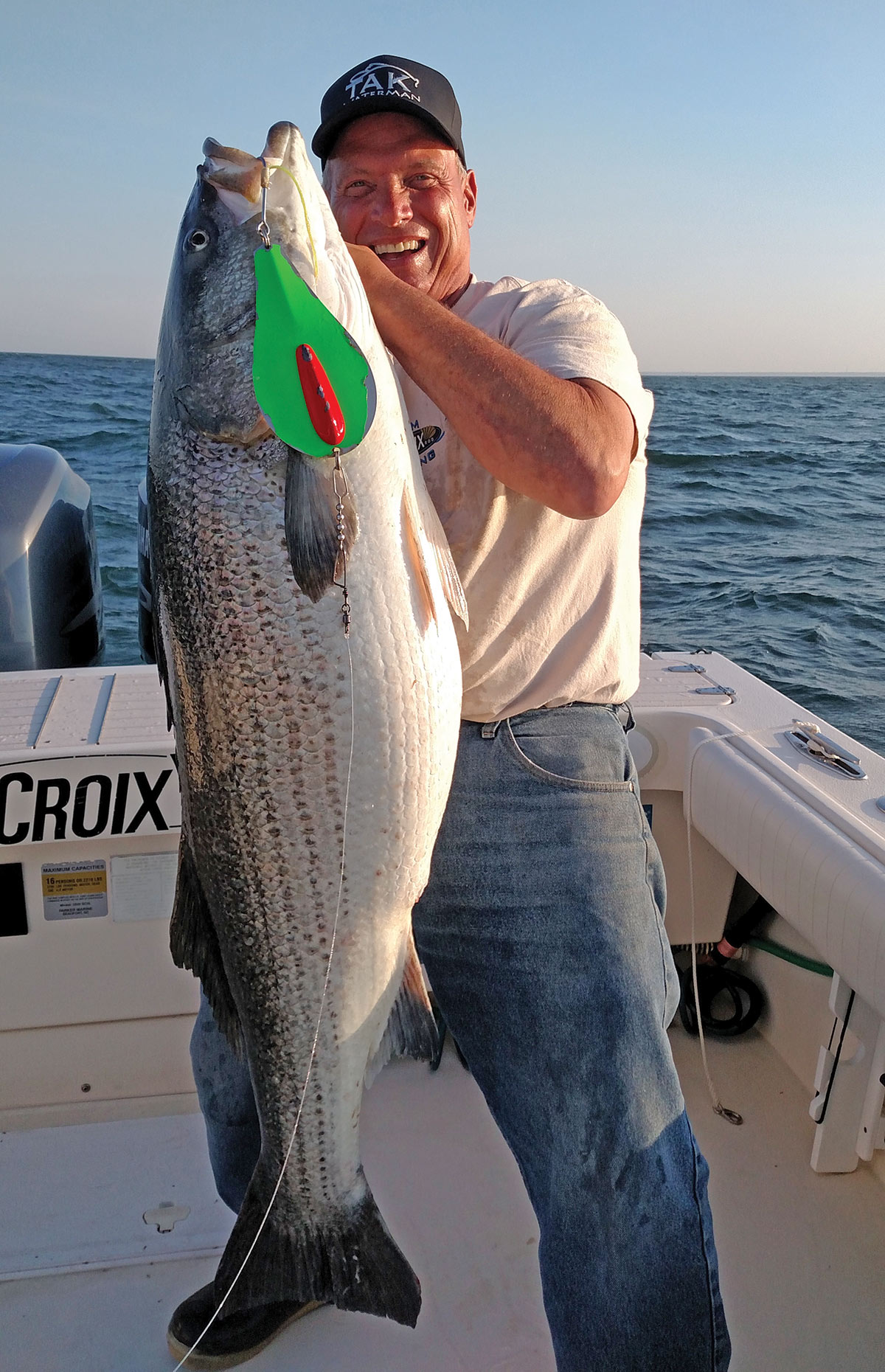 I have switched over to trolling lead-core line exclusively with my spoons, because in my opinion it outfishes anything else. My catches doubled when I started using it; this is because the sway it gives the spoons allows it to have more of a full sweep. I use two Shimano Tekota 800 levelwind reels spooled with 400 feet and 350 feet of lead-core with a 25-foot shot of 60-pound mono leader. This system is simple to use as you just let all the lead-core out until it just disappears into the water and you’re done. This gets my spoons down to 40 and 35 feet using Tony Maja’s custom 8-foot bunker spoon rods.

Down the center of my spread I run my mojos. Mojos have gained exponentially in popularity in the last several years in the northeast, mainly because they are simple to use and they definitely catch fish. One can easily run a spread of two to four mojos with little effort on any size boat. They are basically a heavy bucktail jig anywhere from 4 to 48 ounces with hair tied in reverse that parachutes out.

In essence the mojo is a replication of one of the most productive striped bass lures ever made, a parachute jig. Its modification is that attached to the jig is a 6- to 12-inch shad body with either a single or double hook.

The evolution of the mojo has been in the head designs and body hair used as different manufacturers vie for the attention of the consumer. Heads have changed from cannonball style to bullets, tear drops, chuggers, banana heads, smilin’ Bill style, snake and swivel heads, with many having 3D eyes. Many have added prismatic Mylar reflective strips into the nylon skirts as well.

I set out two tandem mojos on my 7-1/2-foot St. Croix Mojo Salt MH rods spooled with 65-pound braid. The lightest weight tandem, usually a 12/8-ounce is set first and then my heavier tandem, a 24/6-ounce is set next. Tandem pairs vary however I use an assortment of head weights dictated by the depth that I am fishing. If it is rough I run a single mojo as my heaviest drop instead of a second tandem to help avoid tangles. 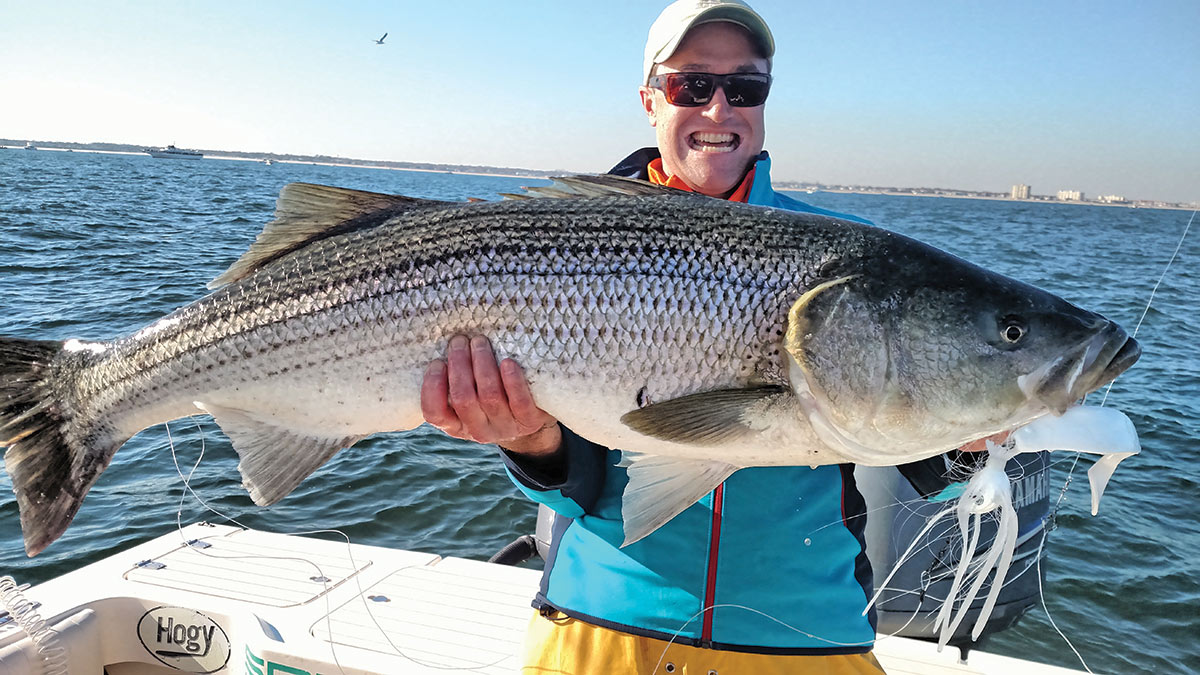 Tandem mojos also vary by what is attached to the upper longer lead. I have had great success running the Maja Magic Mojo Spoon combo closest to my boat. I especially like to go to this combination when my spoons on the outrodders are getting hit more than my mojos.

There are other artificials that can be attached to the top longer lead of the tandem mojo; experimenting with different lures can lead to some surprising success.  For example, 6- to 8-inch jointed body swimmers or straight plugs with or without lips are a favorite choice of many trollers as are attaching smaller spoons that represent a baby fluke. Any soft plastic such as a Hogy or RonZ with or without a weighted head, or the Tsunami shad body will also produce results.

Or how about adding a two- or three-arm small shad rig to run in this position giving them a real buffet? When looking at the different possibilities here I think the jury is still out as no one artificial has taken this spot by storm. For this reason most trollers just run the tandem as it is pre-rigged right out of the bag with the two shads and don’t change anything up as it works very well. Three shad colors have emerged as most productive: white, chartreuse and yellow.

When I set out my mojos I free spool them with thumb control until they hit the bottom; then I place the rod in the rodholder. After 30 seconds of trolling I repeat this process letting them out again to the bottom to gain additional depth.

It is important to let the mojos drop as quickly as possible on the way down so as not to catch the swaying spoons that are in the outrodders. I also like to occasionally pull my boat out of gear to get my spread to drop. When I go back into gear, and the spread lifts many times a strike results.