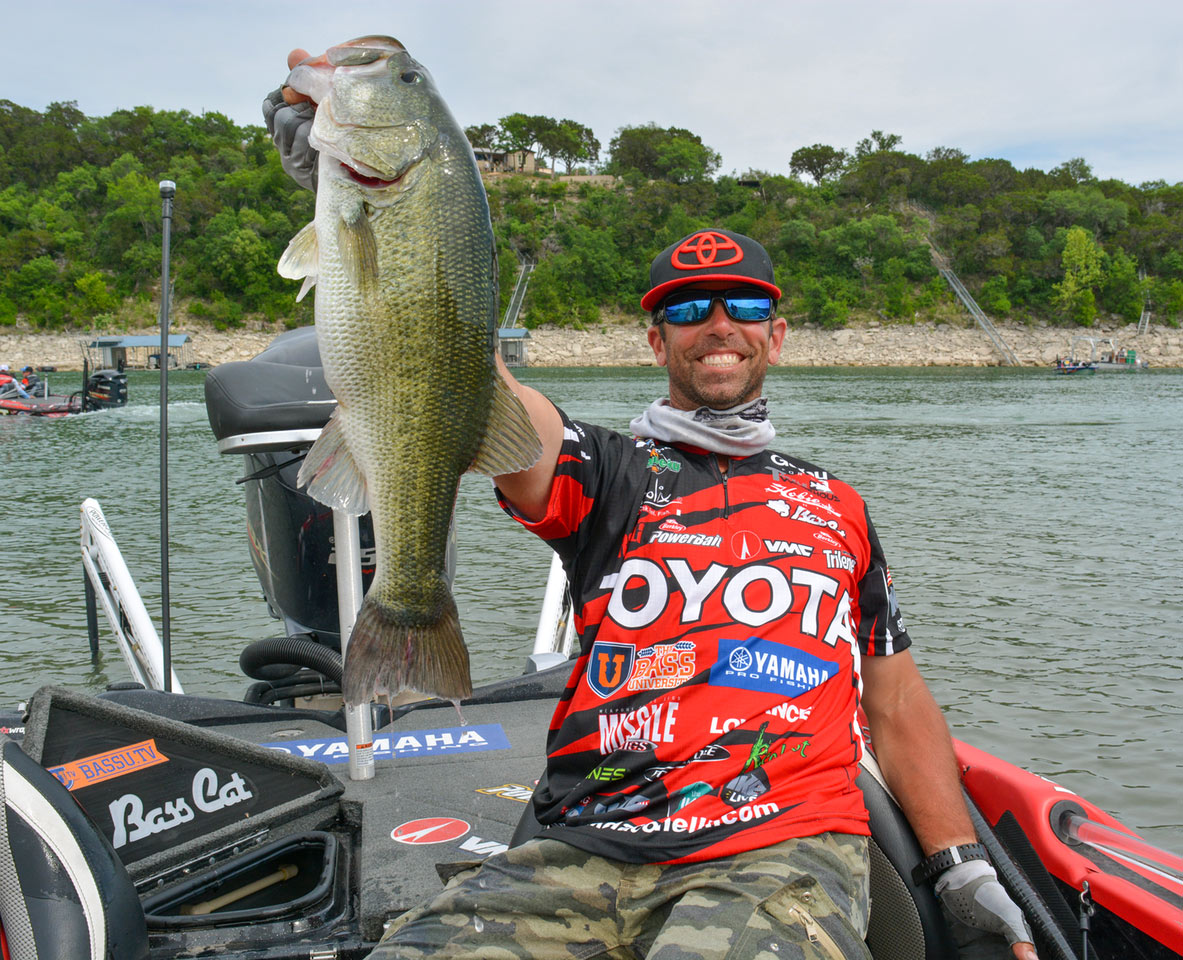 So you want to be like Mike and make it on the professional bass circuit?

With 15 minutes left before check-in, we felt confident in what our livewell held. As we headed to the weigh-in, nearby competitors flocked to our bass fishing honey hole like cheapskates to a $10 buffet. However, the damage was done. We put in on ‘em!

Competition just seems to pulse through my veins. At an early age my appetite for competing was fulfilled in baseball and football. The exhilaration of stepping onto both fields of play is a fond memory forever-etched in my mind. However, the summer of my senior year in high school left me in a forlorn state. I had turned in my helmet and hung up my cleats.  The realization hit me hard. The next time I would take in a high school football game I would need to buy a ticket.

Fast forward a few years and I’m walking into a local sporting store. A flyer catches my eye. Bass Tournament: Assunpink Lakes is the headline, and beneath it reads how there is prize money for the heaviest 10 fish limit (Back then a two-man team could bring 10 fish to the scales.). I immediately got that tell-tale thump in my heart. There’d be no fresh cut grass, but heck, I’d be back in the game!

So my fishing buddy and I plunked down the entry fee and formulated a game plan. It reminded me of Wednesday practice on the gridiron when we hashed out strategy for the opposing team!  The scheme worked to perfection. We landed over 20 keeper bass and sacked the best 10 in hopes they would weigh more than any bag brought to the weigh-in by our competition. When we put them on the scale our 10 pushed the dial over 22 pounds. It was an anxious half-hour as teams put their best on the scale in hopes of topping our weight. Nonetheless, when the dust settled, our weight far-surpassed any team’s total. In fact, when the reports were all finalized, we beat every team from all three lakes combined. First place belonged to us.

We still reminisce about it 30 years later.

I’ll be honest, the thought of competing at the professional level has entertained me on many occasions. However, I had “donated” my entry-fee to the cause on more than one occasion, so the thought of supporting myself financially on tournament winnings seemed like quite a gamble. I hadn’t proven myself outside of the local level. Nonetheless, professional bass fishing has always been of keen interest to me. I soak up as much information generated from it as I can. Like many bass fishing fanatics I scour magazines, read online content, and take in television coverage.

Nevertheless, a good friend of mine possessed enough faith in his fishing expertise to take his love of bass fishing competition to the highest level. During the ‘90s decade, Pittsgrove, New Jersey’s Michael Iaconelli honed his bass fishing skills at the grassroots level to an extremely competitive and competent edge. It gave him the confidence to plunk down larger entry fees and compete for first-place prize money equal to a year’s pay working a 9 to 5 job. When asked to give me the main reason he felt he was ready to go toe-to-toe with the big boys, he said, “I was dedicated.”

In his formative years competing for prize money, Mike fished what is now the B.A.S.S. Nation as a non-boater (the angler who gets to fish from the back of the boat and does not have decision-making capacity). He competed regionally in New Jersey and New York, and as his skillset became better developed he moved up to fish the same level tournaments in the boater’s division. This gave him the opportunity to make crucial decisions that ultimately led to his success or failure.

Fortunately for Iaconelli, his time spent onwater and dedication to his craft began paying big dividends. His success began paving the way to a full-time touring professional on the Bassmaster tournament trail. This year marks his 25th year fishing for bass professionally at the highest level. Some of his greatest accolades have been his 2003 Bassmaster Classic Championship, 2006 Angler of the Year award, and his 2014 Bassmaster Elite win on the Delaware River.

I had the privilege of covering Mike during his Elite win on the Delaware. I would put his ability to focus during that win up against any pro athlete in their prime. During the four day event, he was able to block out all distraction and didn’t let the pressure of fishing his home water infect his decision making. He bested his nearest challenger by 8 pounds and took home the trophy and $100,000 in prize money.

After speaking at length about the path he took to become a highly successful pro angler, I asked if young anglers today would follow a similar path. The answer wasn’t cut and dry. However, he offered some sound advice.

“There is no substitute for hard work. Nonetheless, today’s aspiring pros have more opportunities than ever before,” Iaconelli revealed.  “There are high school bass fishing events and college fishing teams, which are avenues any young angler can pursue.”

“Some of the hottest young talents today came from the college fishing ranks. Back-to-back Bassmaster Classic champion, Jordan Lee, cut his competitive teeth fishing for Auburn University. A college angler can even attain scholarships for fishing these days. It’s an incredible time to be entering the sport,” he explained.

In addition to the competitive fishing opportunities available in our educational institutions, there are more tournament circuits accessible today for this growing sport. Iaconelli cited the FLW, B.A.S.S., and Major League Fishing (MLF) as fantastic opportunities for those wishing to make a living fishing tournaments.  “There is more room for professional anglers today than at any time in my early career,” Iaconelli noted.

Furthermore, the internet has opened an information highway for those wanting to learn anything about bass fishing. Iaconelli said, “Early on, I could read Bassmaster magazine, watch the limited television coverage, or fish with my local club to learn information.” He went on to say, “Today, you can watch live coverage of events from a smartphone or watch technique tutorials such as those (600 videos) offered by The Bass University (thebassuniversity.com). Immediate information at your fingertips at all times.”

This season Iaconelli has chosen to fish the MLF Pro Bass Tour. When asked about its vision and what makes the MLF Pro Bass Tour unique, Mike offered some interesting news. The goal of catching bass using the techniques anglers have honed over decades on the water is still the same. However, there are some captivating changes fans will get to experience live.

The MLF Pro Bass Tour will have a field of 80 professionals competing. Although, only 40 professionals will compete at a time. Forty anglers will compete in group A and 40 compete in group B. From there all anglers move to an elimination round. Each field of 40 will be cut down to the top 20. The top 20 from each group (40 total) move to the knockout round. During this round each competitor will begin with zero weight.

The top 10 finishers move on to the final championship round to compete for the highest weight. A camera in every boat will livestream the action on MajorLeagueFishing.com. “The viewer will be able to select any angler they want to watch fish,” Iaconelli said, adding “At any time you can choose another angler if you want to watch someone different.”

In the past, Iaconelli fished for the five largest bass he could bring to the scales each day. Weigh-ins were held and bass were brought up on stage to be weighed in front of the crowd. The MLF format offers live coverage and exercises immediate conservation by releasing the bass promptly after they are weighed in the boat.

I think it’s important for anyone’s growth, to reflect and ask, is there anything I would do different if I had to do it all over? So, I posed the question to Iaconelli.  “Wow, it’s hard to narrow that down to one,” he responded.  So, I gave him the go-ahead to offer a few. First, he expressed the need to have a deep belief in your sponsor’s product. “If you associate yourself with a product you should believe in it and love it,” Iaconelli said.  Additionally, he added that anglers should not pigeonhole themselves with one technique. In the past, professionals could get away with the perfection of one technique. He used Denny Brauer’s jig flipping and pitching technique as an example. “Denny was able to dominate for many years with that one technique. Today, you have to be able to do it all.”

“You must be able to handle a flipping stick, crankbait rod, and a finesse rod with precision,” Iaconelli explained, adding “The competition has evolved and the bar has risen dramatically.” In addition to the traditional tools of a professional angler’s repertoire, Ike also offered sound advice for anyone thinking about making a career out of fishing. “It’s essential to be good at marketing. The better you become at marketing yourself and your sponsor’s product, the more valuable you become. As you increase your value more opportunities will come your way.”

Modern professional bass anglers wear many hats. Their day rarely ends when the boat hits the trailer. For many, the second portion of their day is just starting. Consulting with sponsors and all the behind-the-scene activity needs to be taken care of.  But like many of the touring pros, Mike has an incredible support staff. It started early in his career with his mother and his uncle. Today that lifeline includes his wife Becky and their children. They are truly a team and without them his success wouldn’t be possible. They take some of the stress off of him which allows for the opportunity to focus on fishing and putting bass in the boat.

Many have tried their hand at casting for cash and many have left with bruised egos. Nonetheless, if your heart is truly in it, you will find success. “I had a lot of people growing up tell me a city kid, a kid from Jersey couldn’t make it in this sport (professional bass fishing),” Iaconelli said.  “I want to tell everyone, go for your dreams! You can do it!”