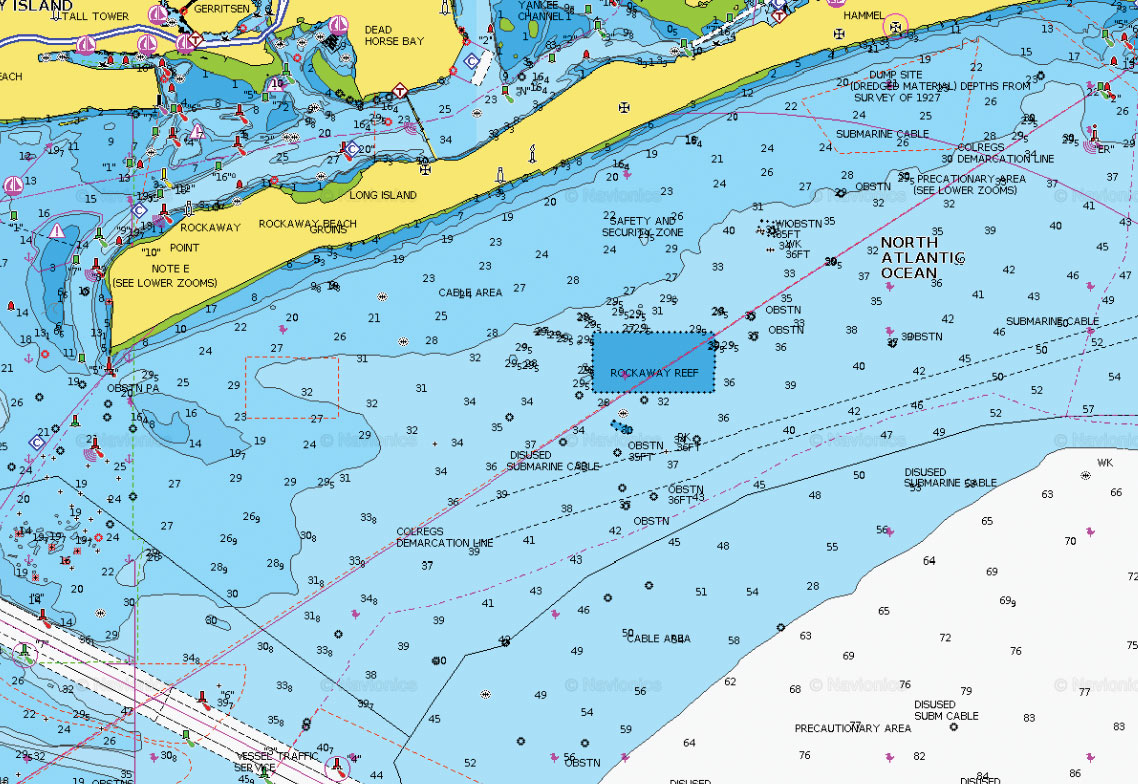 On January 3, 1944 the Bristle Class destroyer the USS Turner met its fate as a series of explosions shattered the ship approximately 5 miles southeast of Rockaway Inlet. The slang “Tin Can” has been used by the US Navy Fleet for decades when referring to a navy destroyer, hence the nickname of the USS Turner.

The Tin Can Grounds is an area of broken wreckage from the turner scattered over a two mile radius between 50 and 60feet of water. Although much of the wreck is covered over with silt, the structure rich bottom is a condominium community to a slew of bottom feeders and gamefish. Starting with the area closest to the actual wreck site (40.29.480/73.52.300), porgies and sea bass keep rods bending by late June, which can last until the start of November. As the November chill starts dropping water temps, blackfish will dominate areas of rough bottom. Although there are a few high spots that remain, your sonar will primarily show bumps along the bottom and depending on the quality of the machine, it may also record fish tight to pieces of rubble.

Those who enjoy trolling or casting will have plenty of company as bluefish, stripers, bonito, little tunny and weakfish are frequent visitors during the spring through fall period. Kastmasters, Deadly Dicks and AVA 007 diamond jigs are top choices to toss around, especially when the birds are wheeling overhead or diving. For stripers and weakfish, you’ll want to keep your offerings down deep most days. Even when fish are showing on the surface, there is usually more intense feeding take place down below with these species.

With the Coney Island Flats just a hop, skip and a jump away, fluke and porgies are the mainstay during the summer months.One to two-ounce bucktails tipped off with a spearing or 4-inch Gulp Swimming Mullet in white, pink or chartreuse work like magic on the summer flatties, while standard bottom rigs baited with clam strips will do just fine for porgies. If your pocketbook allows, it wouldn’t be a bad idea to bring along a dozen or two of sandworms, especially when the winds are from the northwest and high barometric pressure has the porgies looking for red meat over the clams by a large margin.

Despite the shortage of flounder around most of Long Island, the Tin Can Grounds and Coney Island Flats are still a decent option for some big spring flounder. A word of caution however for those in boats under 23 feet. Fishing the ocean during the spring fishing requires keeping an eye turned toward to the weather. Strong winds can kick up the seas in short order, making your ride back to the inlet a challenging one, so choose your days wisely. For updates on the fishing in this area, contact Bernie’s Bait & Tackle in Sheepshead Bay at 718-646-7600.