Getting caught in the rain, or worse, is no time for a piña colada.

After the violent electrical storms and attendant squall lines such as we experience during the passing of a hurricane, fishermen and boaters have cause to worry even though the probability of having your craft struck by lightning is highly unlikely. According to statistics from the American Boat and Yacht Council and the National Fire Protection Assn., the odds of being struck by lightning are minimal. However, you may have a problem attempting to convince your crews of these odds while hauling your tail back to port in a squall amid strong winds, choppy seas and thunder claps as lightning bolts illuminate a leaden sky. Although statistics seem to be in our favor, it’s not something which gives me a great deal of comfort when I’m caught in the middle of these situations.

A Coast Guard boating safety circular (# 66) really grabbed and held my attention. The bold print read “AN ACCIDENT WAITING TO HAPPEN – THE SHOCK OF YOUR LIFE: An unusual boating accident occurred several decades ago in which a fashionable person cruising in an open boat received the shock of his life. The victim, sporting a large metal necklace, was out for an afternoon cruise. During a violent thunderstorm, a powerful bolt of lightning struck the boat. All that remained of the victim were molten pieces of his necklace.”

In the same vein, just to reinforce the possibility that we could become a casualty, I’ll repeat a conversation I had at a fisheries commission meeting when I introduced the subject of lightning at sea. Three of the four commissioners who participated in the conversation had experienced an “illuminating experience.” One person told of an experience which took place on Cape Cod Bay one afternoon while damp, dark conditions prevailed. He could hear thunder in the distance and looked up to see the metal tip of his fishing rod glowing from static electricity in the air. He lowered his rod and had little trouble convincing the skipper to head for the nearest port. Rip Cunningham, editor in chief of Salt Water Sportsman magazine, who was also a member of our group, recalled an incident which occurred while he was aboard a sportfisherman equipped with a metal swordfish pulpit. A bolt of lightning struck the pulpit, which was properly grounded to the keel, preventing any loss of life or serious injury, but caused loss of power and melted wiring. Getting struck by lightning is a devastating if not deadly experience. I’ve had some close calls during severe electrical storms, some of which I’ve recounted on these pages, but fortunately no shocking experiences. For those of us who spend a great deal of time out on the open water, the probabilities of running into these kinds of situations are expanded.

On almost any given hot summer afternoon the possibility of thunderstorms is cited on the marine weather and local radio and televisions broadcasts. Just because they didn’t occur in your particular area does not mean those predictions were inaccurate. The combination of hot, humid air which developing clouds begin to absorb become unstable. These conditions are most prevalent in the late afternoon hours as cooling begins to take place. The opposing air masses collide causing the warmer air to rise and form thunderheads. The thunderheads, armed with very powerful electrical charges, create the potential for dangerous conditions.

There are a number of ways to prevent serious injury, damage, or death from the forces of these awesome events. I have interviewed numerous fishermen, Coast Guard personnel and weather forecasters for their insight on these problems and how we mariners can cope with them. Most of the advice boils down to forming a “cone of protection” over the area of your boat. Some commercial operators rig a lightning rod atop their masts. Copper rods are considered the best and most conductive materials but are becoming more difficult to obtain so heavy aluminum tubing, such as is used for hand railing, is used in its place. From this point, heavy copper wire (#6) is suggested but thicker #4 is preferable to handle the heavy charge of current heading down into the water (ground).

On pleasure boats, especially small open craft, permanent protection is usually out of the question. This places the emphasis on temporary systems, which can be erected as foul weather approaches. I would recommend a publication entitled “Recommended Practices and Standards Covering Lightning Protection” which is published by the American Boat and Yacht Council. You could probably find a copy of this at the main library or ask the librarian to obtain a copy for you from some other library on their loan system. Or you could Google it. There are numerous sophisticated protection systems in operation but few as simple as a friend has employed on his outboard powered boat. He uses a 14-foot length of aluminum tubing squeezed closed at the top, and then attaches this to the engine via a heavy stranded copper cable. The engine is in the water and the lower unit becomes the ground plate. You could also carry a suitable length of aluminum pipe bolted to a cable attached to a small Navy anchor. Place the pipe in mid-ship rod holder and the anchor over the side if you are caught in one of these approaching situations.

With all that said the very best protection is to stay off the water during these sequences. I always plan my trips accordingly and plan to be back in port before the midafternoon cauldron sets these systems brewing. Most of the time these storms will give you plenty of advance warning with such indicators as a wind shift, temperature decrease, darkening clouds (usually from the west), and the sound of thunder in the distance. When you hear these it’s time to head for the harbor.

Fortunately, most of these incidents of lightning strikes occur when boats are in their slips or moorings. A few years ago I received a call from a reader who had been fishing with me in June. He thanked me for talking him into going fishing on a Monday rather than a Friday and then proceeded to explain why. After our enjoyable and productive trip aboard his new 26-foot Catamaran which resulted in a catch of stripers, blues and weakfish the boat was put on her mooring at the entrance of a narrow river where he could get to her easily on a dinghy beached on the shore. During the violent thunderstorm the following Wednesday his boat was struck by a bolt which came down the VHF antenna blew out the battery and all the electronics and came out the hull like bullet wounds. After Captain Tom Hill from Gloucester surveyed the boat for the insurance company he declared it a total loss and said this was one of the worst cases of damage he had investigated on a fiberglass boat. The reader was without his boat although a new one was being built and soon to be on its way from the coast and he is lucky we made that trip earlier in the week and that he was not aboard when the lightning struck.

If you are caught out unexpectedly use common sense along with any system you choose to employ. Don’t touch any part of the protective system or place your hands or body in the water. Fishing and boating are relaxing and rewarding activities and if you employ a few simple precautionary measures you can enjoy them in safety and relative comfort. 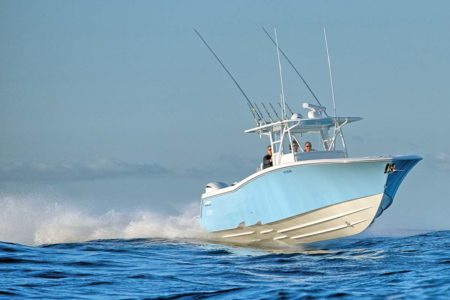 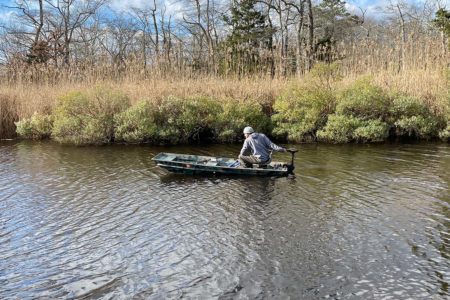