July 19th started like any other typical morning when it comes to a Montauk fishing trip. Due to Covid-19 my husband and I have been going out east to fish more often than previous summers. We woke up at 2 a.m., met up with the rest of our crew, and headed off to Montauk. We got to Montauk in record time from Seaford, just under 2 hours, and had time to stock up on drinks at the local 7/11. We got to Westlake Marina with enough time to hang out before we had to be on the Alyssa Ann. I was hesitant about this trip since the prior week I had gotten super seasick for the first time. This time we would be greeted by a calm ocean. We met Captain Charlie and first mate Liam at 5:30 a.m. sharp and headed out. We were one of the first boats out of the marina.

Joe, my husband loves fishing for striped bass, so that was our main focus on this trip. He would be turning 30 the next day and took advantage of this trip as a birthday celebration. The morning fishing was great, everyone was getting fish after fish. Early on we caught a few shorts, which were released, and a few keepers. We had three keepers on the boat by 8 a.m.

We had split up our 6-person crew into teams, because hey, who doesn’t love some friendly competition early in the morning. The goal was quantity (released or not). We were pretty much tied by 8:30 a.m. Everyone on the boat had gotten a decent fish. It was my husband and his brother’s turn. My husband Joe had caught a nice 38-inch fish and was thrilled. We shot a quick photo and released the fish. That’s when his brother, Tony, reeled in an even bigger 40-plus inch fish. It was beautiful. You could see purple iridescent coming through its scales. Again we shot a quick photo and released her.

Next up was my turn. We quickly hooked up on both rods. My fish instantly took all the wire off the reel and was into my backing. Everyone assumed I was hung up on the bottom, but Liam checked and confirmed it was a fish.

I fought the fish for about 20 minutes and there were times I couldn’t move the handle at all. It was the hardest fighting fish I had ever caught, without a doubt. I was cursing up a storm reeling the fish in, and I think everyone thought I was just exaggerating. Everyone on the boat was encouraging me and telling me I was getting close to the end. It felt like the longest 20 minutes of my life.

Finally the leader was within reach and first mate Liam yelled to Capt. Charlie that he sees color. Everyone on the boat rushed to the gunnel expecting to see a decent size fish, but no was expecting what they saw. To everyone’s surprise, a huge striper lay alongside the boat. Capt. Charlie had to come down and help Liam net the fish. No one could believe the size of this fish. I’ve never seen a group of fishermen so excited in my life. The entire boat was in shock over the size of the striper, and there were smiles all around.

Charlie quickly ran to get the scale he had on the boat. The fish instantly bottomed out the 60-pound scale. The fish was huge. Its head alone was bigger than my husband’s chest. Charlie let me know this was a fish of a lifetime and that he had only seen a fish this size a few times in his life. It measured 59 inches long. We rushed to grab a couple of photos and to get the fish back in the water as quickly as possible. It was only a few inches shorter than me and I needed help holding it. Charlie and Liam worked quickly to release her and make sure she swam away healthy. As cool as it would have been to take the fish back to the dock and see if it would have broken any records, it was an incredible sight to see a fish that size swim away and return to its home. 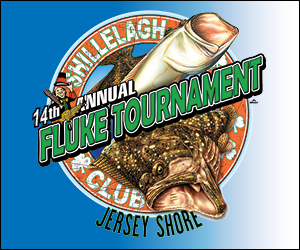