It’s finally that time of year when the days grow a bit longer, and things are starting to look a lot less chilly. While I can’t say for certain that spring has arrived temperature wise, we can all rest easy knowing that warmer weather is on its way. Speaking of spring it’s also that time of year when stocking trucks start making their rounds across the island. Beginning in late March trout will readily be available to those fighting the effects that cabin fever has left. For those looking to shed a few pounds gained over the winter with some exercise along with possibly hooking a few fish, then how about trying what I’ll refer to as the trout trail as something to do on your next day off. Located in the town of Babylon, this trail connects plenty of fishy water spanning from the Southern State Parkway all the way south to Montauk Highway. The big areas of focus here are Belmont Lake State Park, Southards Pond, and Argyle Park, with Carlls River connecting all three bodies of water in between. Any angler up for a nice hike or bike ride with the potential to bend a rod shouldn’t overlook this early spring treat.

Located right off of Southern State Parkway is Belmont Lake State Park. This lake is a relatively shallow one with most of the productive water being the eastern and southern shoreline. Starting around mid-March, the state stocks this area with plenty of rainbows and browns, with an additional stocking coming just in time for the annual fishing festival held in the beginning of April. Belmont is a great starting place in that there is plenty of open water with a good amount of fish, and the park itself is very kid friendly for those looking to bring along a youngster. Standard trout offerings work well with small spoons in gold or silver doing the bulk of the damage right after stockings, with bait having an edge throughout the weeks that follow. A good way to pick apart Belmont is to fan cast along the banks until you connect with a couple of fish and then work that immediate area until the action dies or the fish move. It’s also a good idea to bring a bike or tote a backpack if you’re hiking as this marks the starting point of a stretch of river below the dam at the south end of the lake. This trail connects every good piece of water heading south towards Montauk Highway and is a great way to make a day of it.

Southards in the Middle

The next stop of productive water is south of Belmont in the form of Southards pond. Although much smaller than Belmont, Southards can offer a shot at some really nice fish when the stocking trucks roll around. Those who score best here pay close attention to the dam up front as well as the southern shoreline. I have personally hooked some very nice browns here, and it seems as though this is where the majority of trout are taken from the lake. The stream area flowing out of the pond is also worth a few casts when crowds are low as rainbows and browns favor the turbulent water coming from the dam. Southards is somewhat of a weedy pond but by moving around a bit one can find pockets where the weeds aren’t so troublesome. The only issue with Southards is that it tends to receive a lot of pressure, so the fish do smarten up quickly. By mixing and matching lures or bait and scaling down on line size, you will increase your odds of hooking up here. Even though the fish smarten up quickly after a stocking, the ones you do manage usually make up for the effort. Even if you do strike out at Southards, more opportunity awaits further down the trail.

Continuing the journey, the next destination worth a mention is the stretch of Carlls River above and below Park Avenue. This stretch I consider true stream fishing as the water curves and bends into small eddies and undercut banks. Use caution as fish here tend to spook easily, but if worked carefully these areas have the potential to surrender a nice fish or two. Approaching any undercut bank or run quietly and making as little noise possible is the key. The stream area below Park Avenue tends to offer a decent shot at rainbows, but this area gets hit pretty hard so make your casts count. Throw a cast or two under the road bridge before you leave and put a little extra effort into the deeper stretches of the stream. Although this section of Carlls is a good “along the way” spot, it does bring an end to the scenic portion of the trail. Nevertheless, you can usually pick a few fish here before heading over to Argyle, which is just around the bend.

Argyle at the Finish

As you make your way across Park Avenue, as well as Railroad Avenue, following the trail south, the final destination awaits at Argyle Park. This last body of water remains very popular among the locals who fish it regularly and for good reason. Argyle can at times be a very tricky lake to crack, but it can also be the most rewarding. Anglers here pay the most attention to the outflow of Carlls River into Argyle Lake on the north shore of the lake. Working the deeper stretches of the outflow is where a good portion of the better browns succumb to those plying this body of water. As productive as the north side can be, the south side can also produce, especially after a few days following a stocking. Argyle is a very open body of water and sees a good amount of traffic in the way of commuters and people looking to get out of the house. As busy as the lakeshore can become however, one shouldn’t overlook the potential this lake has. Generally speaking I like to start on the north end and make my way south to the dam. The dam that spills into the brackish water is also worth a cast or two as a few trout, as well as white perch sometimes make their way into the pool below the falls. Argyle is a good spot for those on a commute coming to or from the city as the train station is literally across the street. With that said one could reverse the order and make Argyle the starting point on the trail by finishing their day at Belmont if one chose to do so. It also makes the process easy for those who do not have access to a car as the lake is a hop and skip from the train station.

So far I have focused mainly on trout but I have on numerous times had decent by-catches working the waters mentioned above. Catches of very sizeable largemouth bass, big carp, pickerel, and also yellow perch have made their way into the mix on more than one occasion. I should point out that I’ve never had any consistency regarding these species while on the hunt for trout, but it is something to consider and keep in the back of your mind when fishing these waters. Belmont and Argyle in particular are both home to some very large carp and I can say with certainty that they are a lot of fun on light gear if you do choose to target them. Head out with an open mind just in case the trout fail to cooperate.

Part of the appeal to fishing this area is that one can access these spots easily without the need for a ton of gear. If hiking the entire way, pack a light bag and pay attention to the weather. I always pack a light rain jacket with me wherever I go, even if the weather forecast calls for no precipitation because one never knows when a storm will pop up without warning. Bring some food and water as it’s a lengthy hike, and wear breathable clothing matched with a pair of comfortable shoes. Being on your feet all day can take a toll, and only by gearing up correctly will you make the most out of your day. Also do not forget to leave the house without a valid NYS freshwater fishing license as the DEC patrols these areas on a regular basis this time of year. Fishing gear should be kept simple as well. A 5- or 6-foot ultralight rod with matching reel and 4-pound test will more than suffice. Have with you an arsenal of small spinners, spoons and a few hooks and split shots for nightcrawler or dough baits and you’ll be covered tackle wise. Another thing I always like to mention is the notion of catch and release. While you are allowed to keep a few fish for the table I always find it best to practice catch and release, especially this time of year. A lot of my reasoning behind this has to do with the fact that many younger kids are out fishing the areas mentioned when the stockings occur so by letting the majority of your catch go, we can ensure that everyone gets a fair shot at hooking into a few fish. With some nicer weather ahead and some early season trout on tap, there’s no better time to get out of the house, take a nice long walk, and quite possibly bend the rod with a few early season trout. 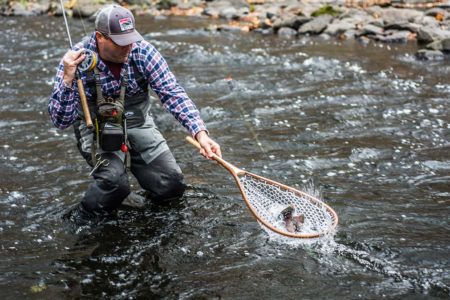 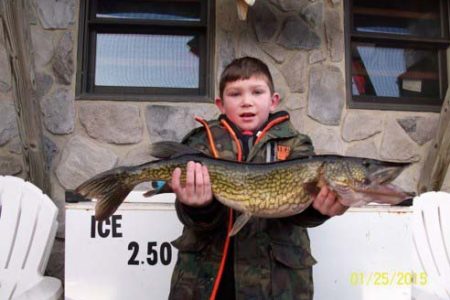