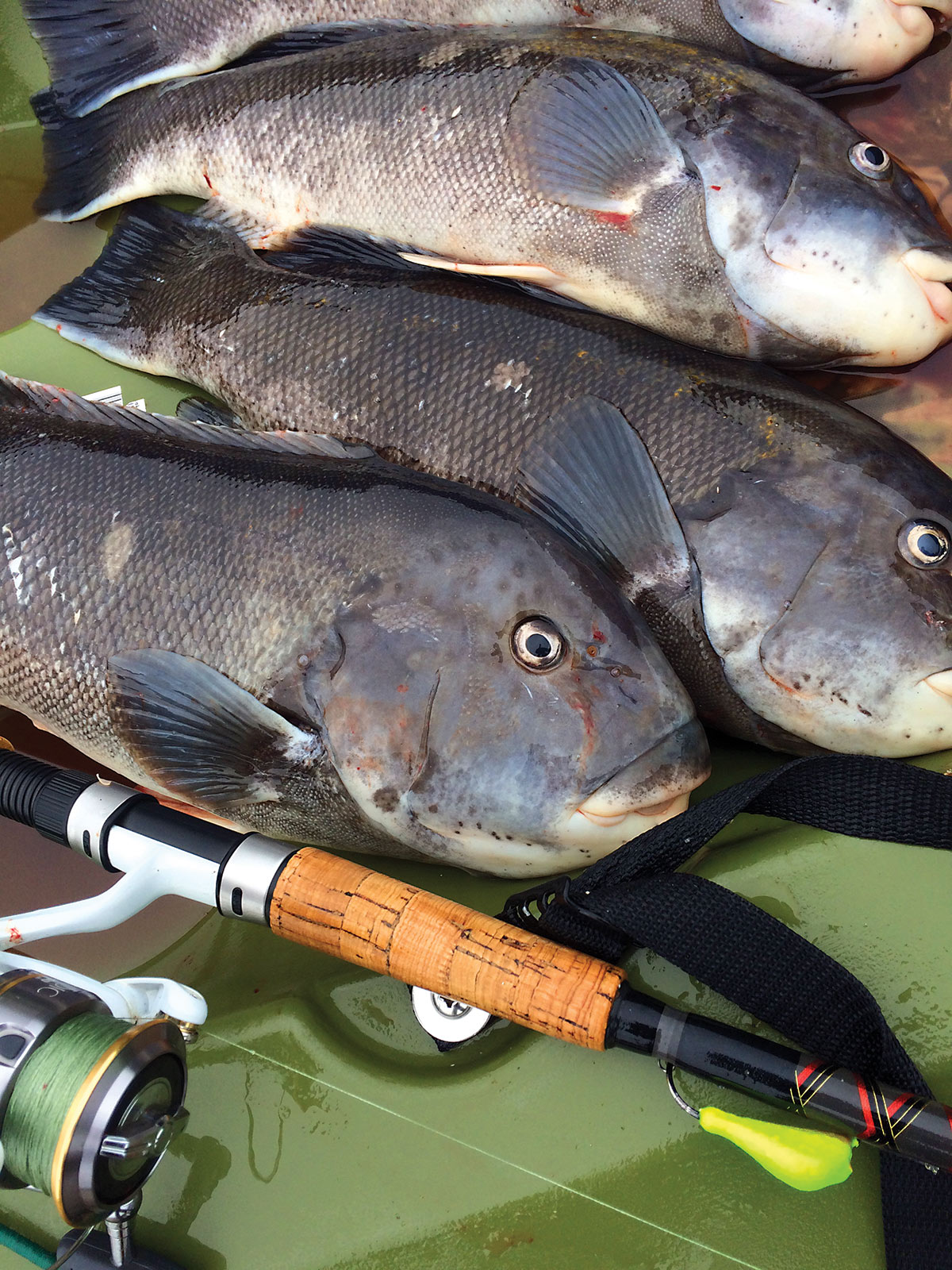 From New England through the Mid-Atlantic, the springtime tautog fishery is dominated by the use of soft baits.

I will be the first to admit that I have a love/hate relationship with springtime tautog fishing. While the thought of hooking into a hard-charging tog after a long, cold winter is enough to get any bottom fisherman’s blood flowing, we are often left scratching our heads as to why the fish fail to respond to our normal tactics. The fact of the matter is, targeting tog during the spring is a completely different game than that of the fall, and one must be able to adapt if they wish to put some spring blackfish in the box.

One of the many details that make spring blackfish more difficult to target is the manner in which they feed in the chilly water of early to mid-April. Old-timers will tell farfetched tales of how a springtime tog’s teeth are too sensitive to actively crunch their prey. While it is certainly an interesting theory, most anglers have come to understand that it is more likely a matter of the fish being a bit lethargic from the frigid bottom temperatures of early spring than deteriorated dental work. During these spring periods of low-intensity feeding, savvy toggers often think outside the box, and save the usual hard baits for later in the season. A wide variety of soft bait options are available to tautog fishermen and can turn an otherwise lousy spring outing into a good pick of fish.

To better understand this springtime phenomenon, we interviewed some highly-regarded captains and tautog sharpies from throughout the region to get a look into their soft bait tactics.

My coast-wide quest for spring bait tips started to the north with Capt. Jeff Viamari of the F/V Bad Influence, located in Yarmouth, Massachusetts. Whether it is an early-season commercial trip, or one of the first charters of the season, Capt. Jeff insists on having a wide variety of baits on hand while targeting Cape Cod’s spring blackfish. When targeting rock piles and wrecks in depths less than 40 feet, Jeff likes to ensure that he has sea worms, clams, hermits, and even a few shedder green and Asians crabs at his disposal. As Jeff puts it, “The fish can be very picky. My first choice in baits is a big sea worm.”

Scaling his presentation down to 30-pound fluorocarbon and a 3/0 octopus hook, Jeff finds he gets more bites while fishing soft baits with lighter gear. He also noted that fishing his bait rigs with a longer snell will also equate to more bites. When Jeff decides that a jig is more appropriate, he will go as light as possible and drop down to 20-pound fluorocarbon leaders, if necessary.

Moving a little further south down I-95, I reached out to Capt. Tony Guarino of Booked Off Charters. Capt. Tony spends a ton of time anchored-up over tog bottom throughout the season while fishing out of Wakefield, Rhode Island. Capt. Tony noted that hermit crabs reign supreme as far as soft baits are concerned, but the issue is usually lack of availability.

When all else fails, the blackfish will usually bite a hermit threaded on an octopus hook, however, cracking the shells will leave the boat a mess at day’s end. His second favorite soft bait is a nice, fresh clam. Tony fishes these on a single-hook dropper rig, and prefers to, “Thread them on the hook starting at the top of the tongue with the hook coming out of the guts.” When the fish are active enough, Tony noted that green crabs with softer shells, those fresh off a molt, will produce as well.

My next call on this list of blackfishing heavy hitters was to Brooklyn, New York to talk to Steve C., who is perhaps better known by his longtime internet handle, “EC NEWELLMAN.” Steve was out filling totes with tog before many contemporary captains knew how to walk, fishing both commercially and recreationally in the New York Bight nearly year-round. While Steve has largely given up blackfishing in favor of cod and pollock, his many years of prior experience have made him an authority on all things tog. Steve noted that, “Normally it was fishing with skimmers (clams), and if you had to, salt them since you need them to stay on the hook.” A slightly more unorthodox tip that Steve passed along was to use shrimp. As he put it, “The same shrimp you buy at the store… buy it in a 5-pound block, defrost during the trip and leave the hard shell on…that works…and it’s not expensive.”

As Steve wisely pointed out, the bait selection is moot if conditions are not favorable for a spring bite. Finding warm water in the early season is critical to success, as is some intel on some locations that hold fish during the colder months of the year. Success may very well mean taking a ride offshore or to locations with less pressure than those where the fleet fishes every day. Once you dial-in the fish, you can then feed them some nicely-presented soft baits to fill your limit.

Ken Westerfeld of Queens, New York, holds the current all-tackle blackfish world record of 28.8 pounds. Ken targets tog up and down the coast, so he was able to pass along some good soft bait fishing insight. Ken will bring the normal array of crabs on most of his spring trips, but he has had great days with soft baits when the tog are too sluggish to crunch a harder offering. Ken said that large surf clams and quahogs will often out-produce crabs on spring outings. Ken has even heard of people having decent success with steamer clams when other options are not readily available.

While Ken recognized the effectiveness of hermit crabs and worms, he generally avoids them because of their often outrageous price tag. Ken made a point to mention that one should, “Expect more scratchy life,” and more short fish when using softer baits. This does complicate things, as he also pointed out that it doesn’t necessarily pay to let the fish chew a soft bait as you would a crab because the fish will strip the bait right off the hook. Swinging early and often when using soft bait is necessary in Ken’s opinion, but it is a double-edged sword in that you may miss more fish than normal. This is just one of the many little challenges of targeting blackfish during the spring.

The last peg in my spring tog wisdom quest was a call to Capt. Tom Daffin of Fishin’ Fever Sportfishing down in Cape May, New Jersey. Capt. Tom loves fishing in late winter and early spring for a shot at a true trophy blackfish. As he put it, “The majority of my spring trips are more about quantity than size, but you just never know when a slob will come through.” The Fishin’ Fever has many April giants to its name, including a 25.37-pounder that holds the current New Jersey state record. It is for this reason that Tom refuses to scale down his rigs in the spring, using 5/0 hooks and 60-pound fluorocarbon at all times.

Tom recognized that having soft baits on hand can be critical in the spring, especially when the bite is off. Shedder white crabs are great, but they are often spotty in availability. On many spring trips, Tom likes to fish a fresh clam with the belly and all. Tom said, “You absolutely have to keep the belly attached. If you’re just using the tongue you’re missing out on all of that scent.” When the bite gets really tough, Tom will even have his patrons fish the clams on a jig. One thing that Tom was adamant about was not tossing shucked clam shells overboard. Many inshore captains, especially further north, will make it a point to chum with the shells of freshly-shucked clams. Tom said that doing this in the offshore areas he targets will act as a dinner bell for dogfish, and it can pretty much ruin a given drop for the day.

The last tip that Tom passed along was perhaps the most unorthodox that I have ever heard; fishing cooked, cleaned cocktail shrimp. To be honest, I thought he was pulling my leg, but he assured me that this will often produce when all else fails. He has not had much success with raw or uncleaned shrimp, but those that are literally ready for hors d’oeuvres will often get the fish chewing. He will use these either by themselves or to tip crab baits to sweeten the deal, adding a little humor in saying, “The cocktail sauce is optional!”

Regardless of where your early-season tog journey takes you, try to take into consideration these valuable soft bait insights from some of today’s top tautog fishermen. Branching out from the usual crab offerings may just give you that edge for the coveted pool fish, or help piece together a limit on a tough day.