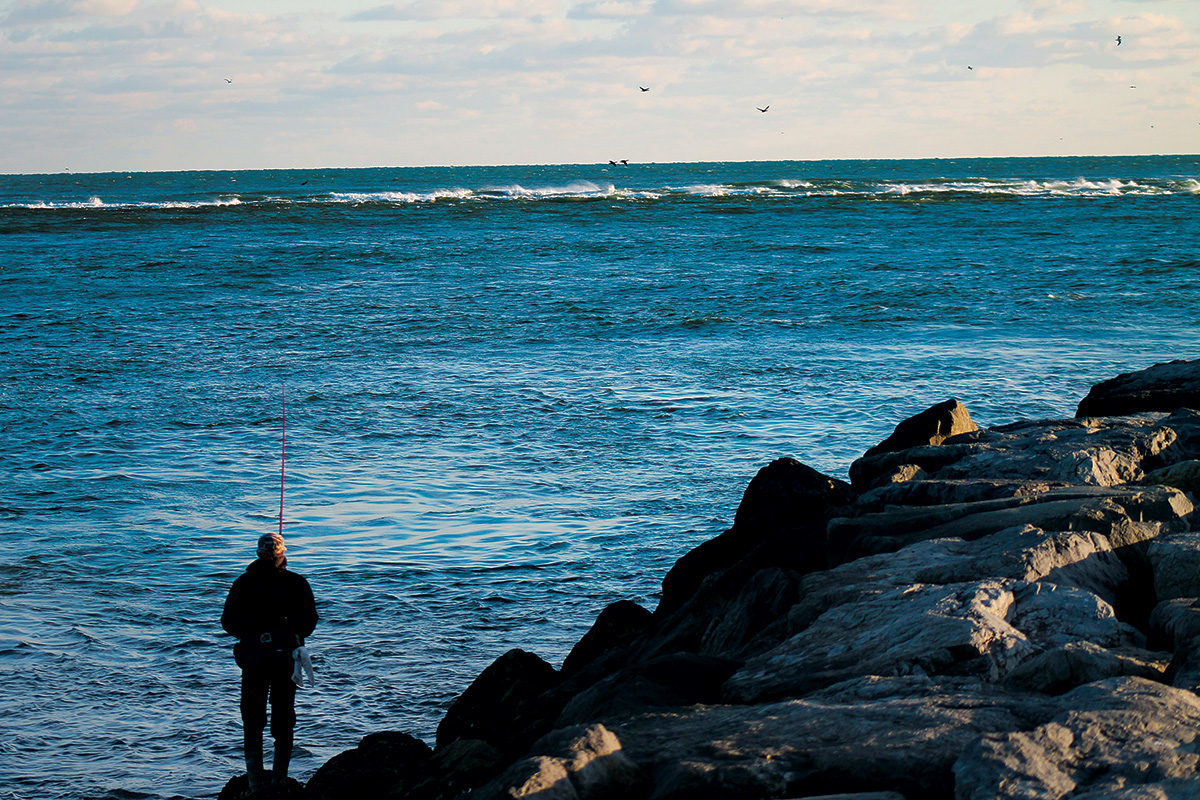 Adding the snap jigging technique to your bucktailing repertoire adds a whole new dimension to your surf fishing arsenal.

Veteran surfcasters will remember that for a very long time, the use of bucktails by the surf crowd was pretty much limited to the strong currents of inlets and breachways. That of course has changed dramatically along some parts of the Striper Coast, and probably nowhere more so than at Montauk, where the humble bucktail likely sees more use than all types of plugs combined. Not to be overlooked is the cost factor. Some casters find it hard to stock up on plugs that can go for $20 or more when most bucktails can be had for a $5 bill.

While plugs continue to catch their share of fish, they can, depending on conditions, become ineffective in heavy surf, and this is where the bucktail shines. When northeasters blow and the surf builds, you will find virtually everyone tossing bucktails.But as many casters have discovered, these versatile lures can effectively be adapted to many different surf fishing situations. They are still the go-to choice for many jetty jockeys working inlets and breachways; they can be fished effectively in back bay areas, around bridges and along oceanfront beaches, whether they be sand or boulder studded shores.

There are just as many ways to fish a bucktail as there are areas of application. One that is grossly overlooked is snap-jigging. Most anglers believe this highly effective technique is purely a light tackle gig, but nothing can be further from the truth. Practicing snap-jigging in the surf does require some modifications compared to the light tackle approach, but the basic concept is still in play. Those sharp lifts and drops of your jig replicate an injured baitfish in its last dying throes, something gamefish can’t resist and is the ticket to turning on fish when they are not aggressively feeding. It is especially effective on stripers, since they can be extremely selective when they are not in feeding mode. When bass are set up in a rip line ambushing baitfish or corralling them in a jetty pocket, they are far less selective and much more susceptible to standard bucktailing techniques.

When fishing bucktails in cross current situations – inlets and breachways, from shorelines bordering bridges, rips formed by a point – most casters angle their cast up-current (the angle dependent on the speed of current and the weight of your jig) and then allow the lure to swing slowly along, or just above the bottom, and retrieve just fast enough to keep the slack out of your line. Some interject a gentle and rhythmic jigging action to the jig as it swings in the current. If you’re trying to present the lure along the shadow line on the up-current side of a bridge, then you need to adjust the weight of the bucktail and speed of your retrieve so that the lure rides just below the surface and swings along the front of the shadow line. In both cases, the lure weight and retrieve speed have to be adjusted as the current increases or decreases.

A similar approach can be taken along an ocean or sound beach if there is a sweep in one direction caused by wind or wave action. Some areas may have a substantial current running parallel to the beach, also lending themselves to the same techniques.

In addition to the weight of the bucktail, the design of the head and the amount of hair can also play into the sink rate of the lure, which affects the angle of your cast. The narrower tapered head of a Spro bucktail will have a faster sink rate than say a Smiling Bill type jig, and a heavily dressed bucktail will have a slower sink rate than a sparsely tied jig. Taking these factors into consideration can be a big help when it comes to where and how you want to present your lure.

When it comes to snap-jigging, many of the same considerations come into play, but you want your jig bouncing off the bottom when snap jigging. Being able to maintain contact during the time your lure is descending to the bottom is critical, and it can be a bit more difficult compared to snap jigging with light tackle, given generally deeper water and in some cases stronger currents. This makes developing the skill and knowledge to select the right weight, the right angle and the right speed of retrieve all the more important. If you are already proficient at bucktailing the surf, you will be way ahead of the game and should be able to easily transition snap-jigging into your arsenal. 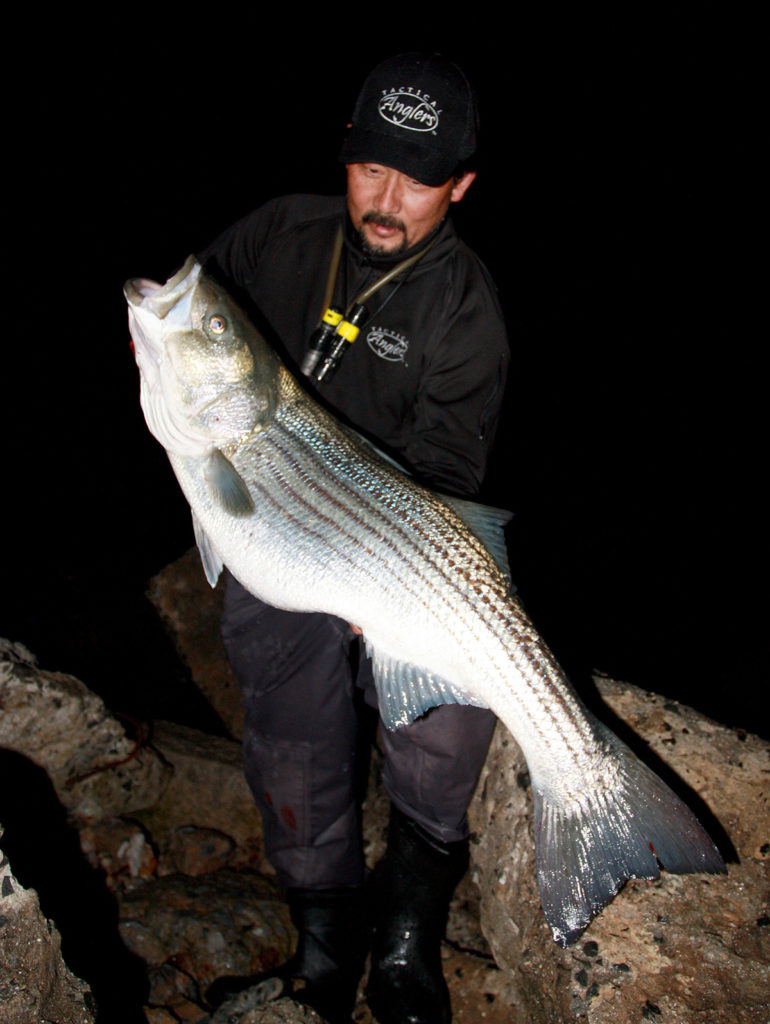 Make no mistake about it. Snap-jigging is work and continuously jerking a 10- or 11-foot rod can get tiring. Fortunately, the current wave of light-weight surf rods helps reduce the fatigue factor. Also, you want a stiffish tip for this technique so that the energy you are expending with the exaggerated jerking motion is being transmitted to the lure and not lost in your rod tip. For the same reason, I also like to tie direct to the jig with a 4-foot length of fluorocarbon leader. Braided lines are an absolute must. The finer diameter and reduced drag on your line allows you to get down to the bottom with less weight, and also reduces any bow in your line below the surface. That and the lack of stretch provide the “feel” necessary to be successful at bucktailing in general, and snap-jigging in particular. Since many of your strikes will come on the dropback, a high visibility line is a help in detecting when a fish picks up your jig. There are times when you will be able to see your line “jump” where it enters the water, a precursor to the bump felt by a fish sucking in your lure.

Getting into a rhythm and concentration are the keys. Once you make your cast, the instant you feel the jig reach bottom, you want to give an exaggerated upwards jerk to your rod (from as close to 3 o’clock and up to between 1- and 2 o’clock). Keeping the butt of the rod between your legs will save a lot of wear and tear on your arms and shoulders. Once you reach the top of this jigging motion, slowly lower your rod until the jig reaches bottom. You must maintain contact with the lure throughout the descent – that might mean slowly reeling as the lure falls, or in some cases you might not be reeling at all. As the lure begins to swing in the current, it will begin to rise. In order to keep it in the strike zone, you can extend the swing by opening your bail during the descent until you regain contact with the bottom. You may repeat this action three or four times on some casts. It is not uncommon for hits to come on the back end of the lure swinging down-current. If you feel any bump or hesitation in your contact with the lure, immediately set the hook.

In the case of light tackle jigging, we prefer to keep the bucktail unadorned. It seems to make less of a difference in the surf, and I’ve caught plenty of bass with a trailer, but one drawback with adding a trailer to your jig is that it will occasionally slip up over the hook, making for some wasted effort. However, if you develop the “feel,” you will be able to sense that something is wrong – like feeling weed on your lure – and you can cut your retrieve short.

Making the extra effort required to snap-jig successfully pays off if you give it a chance. You may look silly to the sharpies fishing alongside you, but once you land a few fish while they go dry, the smart ones will soon be looking silly themselves.