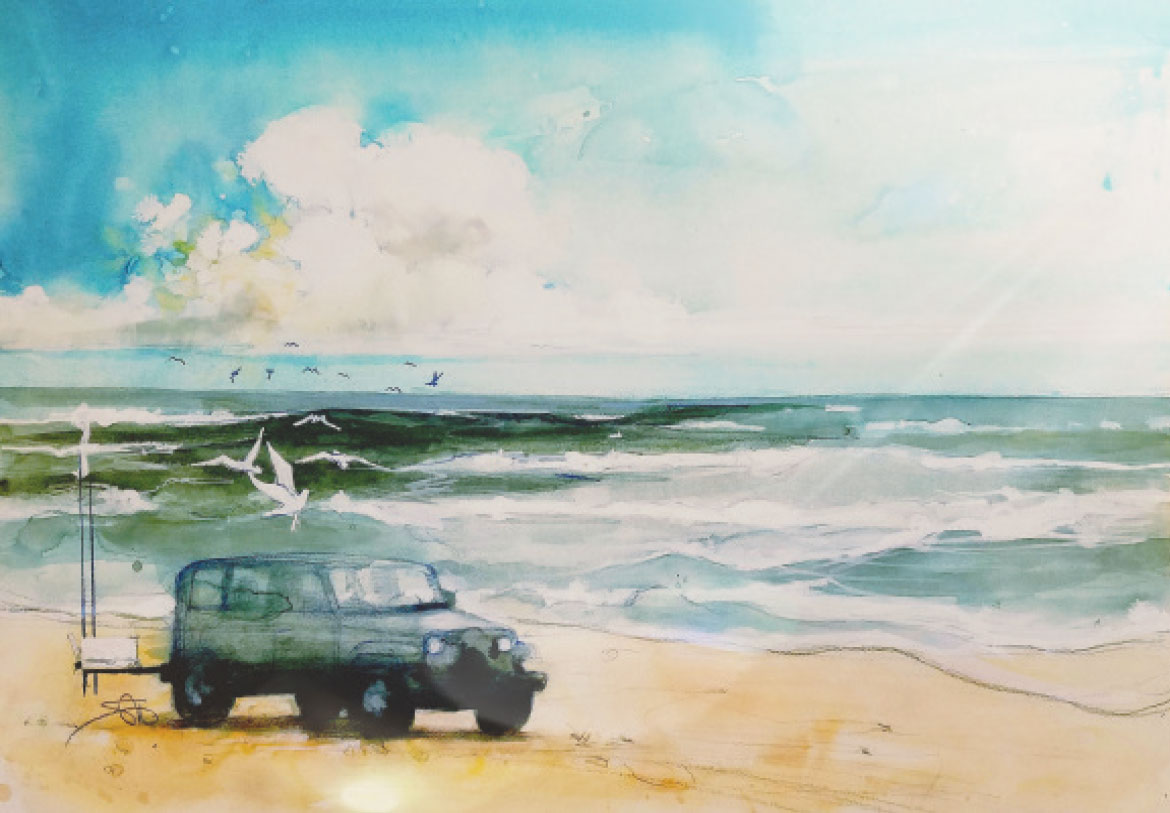 As many times as I’ve written about beach structure and spoke about it at seminars, it seems the nitty-gritty of it eludes many beach rats, yet understanding how to read a beach can pay enormous dividends. Therefore, I think it’s worth another trip down the rabbit hole to try and find out what Alice is all excited about. It isn’t difficult, but does require a wee bit of study. Let’s start with beach language.

All professions, sports and organizations have unique jargon, and surf fishing is not an exception. Over the years we’ve borrowed some terms from science, invented some when the language needed them, and in the end we’ve created a surf language we all understand that can be used to discuss topics and construct mental images. Okay, here goes. Let’s start with positions on the sand.

The Berm: The berm of the beach is the more-or-less flat area that extends from the base of the dunes to the beginning of the slope of the beach.

Slope: The slope of the beach is an angle, and in this case it’s the angle from the end of the berm to the lip.

The Lip: The lip is a slight drop-off; it may be only a few inches, between the bottom of the slope and the beginning of the trough. The lip is created because of turbulence created at a spot where incoming waves butt against the remnant of the preceding wave that is rolling towards the trough down the slope. When they collide turbulence results that lifts sand and deposits sand in such a way that a slight edge is created that we call the lip.

The Trough: The trough is a long depression between the outer bar and the beach. It is ideally at least 4 feet deep at low tide in order to produce potential productive fishing.

The Outer Bar: The outer bar is ideally about 70-75 yards off the beach. The bar is created when sand is pushed toward shore by advancing waves and then as these waves “feel” bottom and tumble forward (break) the sand that was being pushed falls out producing a bar. Once the bar is established it protects the beach from erosion somewhat because waves break first well off the beach thus draining much of their erosive power.

Cuts: However, the offshore bar is not created with uniform elevation. In some spots the bar might be quite high, whereas at other spots it might be much lower. The places where the bar is low gradually become deeper via the action of waves. Waves push over the bar and fill the trough with water. When the waves are small the extra trough water easily oozes over the bar and out to sea. However, larger waves (4-6 feet) put more water in the trough than can quickly slip out to sea and so the water in the trough begins to rise and move parallel to the beach seeking any area in the outer bar that is lower than the rest. As this water rushes seaward it carries sand away from the outer bar until these minor low spots become deeper and are called cuts.

Points, Humps, and Coves: Wave action also sculpts the beach slope. In the process, sand is scoured and deposited irregularly creating coves in the beach front, minor points of sand that stick out into the trough, and sometimes humps of sand in the middle of the trough.

All the items defined above are elements of beach structure and one thing they all have in common is they have edges. If we can learn to read beach structure we will understand where the edges are, and that ability improves our fishing. Edges attract baitfish, presumably because instincts “tell” them they can use edges as cover as some degree of protection against predators. Of course, predators have evolved instincts too and thus glide along close to edges hunting for prey. For anglers, all these structure items mean nothing unless it affords us an opportunity to catch fish.

The “skinny” is that flat featureless beaches are far less productive than those with complex structure because bait and fish pass by but don’t hold. Now, with good beach structure bait collects in the trough near edges and when gamefish find them, they push the bait against the structures and hold it there.

The perfect beach for me has a wide high berm, a beach slope of about 45 degrees, an offshore bar with cuts about 75 yards off the beach, and a trough that’s at least 4 feet deep at low tide.

Okay, let’s say I find such a beach, what do I do now? Where exactly along that beach will I concentrate my efforts? The first thing I do on arrival is look right and left. I look for places that offer the most irregularities. How can I “read” this? An angler’s best friends when reading a beach are waves and sunlight. Waves are because they break over the shallow areas and not break as they travel over deeper areas. As they break, white water is produced. Sunlight is a best friend because shallow areas appear light colored while deeper areas darker. Thus, I can read a beach on calm days with the help of sunlight, and use breaking waves on rough days. So, let’s say this day there are nice sets of waves. As I look both ways, I’m not only looking for spots with lots of white water but also with the most irregular moving water. Uniform flowing white water usually holds some fish, but white water that tumbles in multiple directions almost always is a more productive spot.
Let’s say I spot a nice point but when I get there the white water is “boring.” I mean it simply rolls in one direction without a lot of turbulence. Now suppose I take another look and spot a point projecting off the beach right in front of a cut. Waves spill into the trough, the water in the trough rises, and then rushes along the offshore bar until it finds a cut to exit seaward. However, water on the other side of the cut also rushes toward the cut and thus water moving from two directions bangs into each other and creates surging turbulent water. There may have been some fish at the first point, but chances are more fish will feed in the turbulent water because it offers a feeding advantage since smaller bait cannot swim as easily in the turbulence as larger gamefish. As the tide progresses I move from spot to spot as the best conditions appear and disappear.

That brings me to the effect of the tide. Although tide does not change the beach structure it has an enormous influence on the hydrodynamics of the water in the trough. Hydro (water) and dynamics (movements) are affected by wind, waves, beach structure, and the tide. A sand point that stretches underwater at high tide might be almost high and dry at low water, and thus turbulence that nurtured excellent predator feeding at high water is now nothing more than froth washing over sand. Similarly, a less impressive sand elevation might produce little or no white water at high tide, but at low water has steep edges and lots of turbulence above and around it. I look for changes in hydrodynamics as the tide rises and falls and I switch my position on the beach accordingly.

Wind is one of the forces that not only affects hydrodynamics, but also alters beach structure. Strong winds that run parallel to the beach tend to flatten the beach and reduce or eliminate the structure. Winds that blow parallel to the beachfront also have hydrodynamic effects. The principle effect is “sweep.” A strong sweep makes lure presentation difficult because the lure’s time in the strike zone is limited. Parallel winds also don’t produce complex hydrodynamics—just a one direction motion called a sweep.

The longer the wind blows parallel to the beach the more likely the beach structure will be eliminated. However, moderate wind that pushes straight against the beach (90-degree angle) produces waves that push sand into points, bars, and create cuts, as well as make the slope of the beach steeper. In other words this situation improves beach structure.

It isn’t difficult to understand structure: it’s about areas of sand that are higher or lower along the beach. It isn’t difficult to understand hydrodynamics either, because it’s about white water and turbulence created by waves, wind and tide. It does take a little time and effort to “read” a beach, but the resulting improvement in an angler’s understanding leads to enhanced success that can have staggering results. CCC