Several strong up and coming year classes provide hope for the future and lots of fun for those who downsize their tackle.

Snowflakes and a steamy mist rising from the ocean’s surface blurred my view as I scanned the surf for signs of life. It was December 8th and the season’s first snowfall was a reminder that time was running out on another striped bass season. The surf, flattened by an offshore wind, seemed void of life – no birds, no slicks and no sign of bait. I wondered if time had run out. Snow is never a good sign for those who pursue Roccussaxatilis, especially when it comes this late in the season. This past year however, water temperatures in the Northeast were abnormally warm, so I felt there was still a chance that the fish were still around. After all, it was only a few days earlier that I had beached 30 or so fish in just a couple of hours.

I stopped at the jetty, and still not sure about the prospect of finding any action, I passed on putting on waders and a foul weather top, instead opting for a pair of easy on – easy off knee boots. I climbed atop a flat rock on the shore end of the jetty and launched a bay anchovy patterned, nakedbucktail into the pocket. It took just two or three jigs of the rod to connect to a spunky striper. When I got the fish to the rocks, the six-foot Loomis and 10-pound braid were not designed for the task of lifting a chunky 26-inch fish up on the rocks. With a bum ankle, I stumbled down to a lower rock where I was able to grab hold of the 20-pound leader and lift the fish to where I could get my thumb in its mouth and quickly release him. I fired off another cast from my new perch and hooked up within two turns of the reel handle. The fish pulled drag and gave a good account of itself before I repeated the landing and release process.

Beaching these fish would be much easier so I moved off the rocks and settled on the sandy rim of the pocket where I proceeded to beach another half dozen stripers before going ten or so casts without a touch. I retreated to the truck and steered west toward the point, stopping where an eddy had formed within a short cast of the beach. For the next hour, maybe more, nearly every cast resulted in a fish or a missed hit. One cast produced five or six hits in rapid succession before coming tight on a fish. The fish were thick and I was alone except for another caster a couple of hundred yards down the beach. There is something magical about catching stripers as snow falls around you. Some of my fondest fishing memories are made up of such moments, most of which signaled the end of that season’s striper hunt. That would be the case again today as it marked my last trip to the surf in 2017.

For most of November, I had been catching anywhere from 20 to as many as 50 stripers per session, fish that many anglers were referring to as “micro bass.” Most days, they ranged from 12 or 14 to 20 inches. Some days, another class of fish ranging from 20 to 26 inches with a very occasional borderline “keeper” of 27 to 28 inches dominated the action. On this day, the larger class of fish narrowly outnumbered the micros. Of the hundreds of bass I caught over a five or six week period, there was not one honest 28-inchfish in the bunch. And guess what? I could care less. I like to catch big bass as much as anyone, simply because they offer the greatest challenge. But the reality is that the numbers of quality fish in the fishery are down, and especially where the surf is concerned. Many surf fishermen, frustrated by the lack of fish meeting the 28-inch minimum size, and over-gunned for the small fish, cut way back on their effort. Some just simply packed it in well before they normally hang their rod up for the season. There were days when I was hooking up with my little six-foot rod on virtually every cast while other casters tossing 10 and 11-foot sticks with larger payloads were just picking a fish here and there, and having a lot less fun doing it.

Where Did They Come From?

These small fishmade up the bulk of the late season fishery, especially from Rhode Island to the Jersey Shore. Even boat fishermen, who had some good innings with quality fish in scattered locations found themselves limited to the small fish as the season wound down. Some packed it in, others broke out their weakfish rods and had a ball as they extended the season by another couple of weeks.

The reason we have all these small fish, and why there is reason to be optimistic about the future can be traced to a number of good and exceptionally good Young of the Year (YOY) indexes from Chesapeake Bay and the Hudson River in recent years. Chesapeake Bay, which is responsible for approximately 70 percent of the stripers that roam our coast, produced an index of 34.6 in 2011, far above the long-term average of 11.9, and the fourth highest number in the Chesapeake Bay survey’s 58-year history.That was followed by a paltry 0.9 in 2012 and a 5.8 in 2013, before rebounding to 11.0 in 2014, which was just shy of the 61 year average of 11.7. In 2015, the surveys revealed another banner year of spawning success as the index soared to 24.2, the eight highest ever recorded. In 2016 the index dropped to a disappointing 2.2 but bounced back to 13.2 in 2017, which is above the 64-year average of 11.7. The fishery is also being bolstered by two exceptionally strong year classes in the Hudson River. In 2014, New York’s Department of Conservation recorded a YOY of 24.60, followed by a just slightly lower YOY (22) in 2015.

I think it is safe to say we should have plenty of schoolie stripers for the next several years and if you want to take full advantage of this fishery, give some serious consideration to scaling down your tackle to match the size of these fish. And if you’re concerned about connecting with a better quality fish while fishing the light stuff, you shouldn’t be. Today’s high-tech rods, smooth drags, and braided line allow even a semi-skilled angler to handle any teen or twenty-pound class striper that comes along.

If you chase stripers in the surf, your ability to fish 6 to 7-foot rods will be dependent on having the right surf conditions. If we’re talking about ocean beaches, you want a relatively flat surf – the kind that often comes with an offshore wind. These winds tend to flatten any existing swells and also boost your casting distance. Finding ideal light tackle conditions is much easier on the backsides of inlets and barrier beaches, and also in bays, harbors and sounds. On my home beaches of Long Island, the oceanfront beach was normally very fishable when winds blew out of a northerly quarter. When the surf was up, I’d retreat to the backside of the inlet where there was no shortage of small stripers.

If you do your fishing from a boat, you can afford to be a lot less concerned about the wind and sea conditions, as long as they are within the bounds of safety. Casting distance and reaching fishable water is pretty much a non-factor.

Reels in the 2500 to 3000 size range should match nicely to most rods in this size range, and spooling them up with 10 or 15-pound braid will complete the outfit. Finish off the braid with a 3-foot leader of 20-pound fluorocarbon or good abrasion resistant mono and you should be good to go.

Single hook artificials are the way to go in this mostly catch and release fishery. Last fall, most of the fish I caught fell to unadorned bucktails in the 1/2 to 1-ounce range. On a few trips, 4 and 5-inch swim shads and 6-inch Tsunami Sand Eels were very effective. Where sand eels were the dominant bait, the 6-inch sand eels shined, and when the fish were clearly on peanut bunker, the swim shads took their toll. Most days, whether in the surf or a boat, a wide range of soft plastics, including curly tails, 5-inch Bass Assassins, Panther Martin’s 1-ounce BigFin with the paddle tail and the 5-inch Berkley PowerBait Jerk Shad caught very well.

Plugs were also very effective on these fish at times for other anglers, but I cringed at the amount of time it was taking some anglers to unhook and release fish due to plugs adorned with multiple trebles. In the case of poppers, what’s better than seeing a fish come up and wallop a surface plug? Either replace the trebles with single hooks, or cut off one of the three hooks on a treble and flatten the barbs on the two remaining hooks. This will dramatically reduce the time spent unhooking these fish. I saw quite a few schoolies taken on the 4-1/4-inch floating (green eye) Super Strike and the 3-3/4-inch Stillwater popper this past fall. At night, plugs like the small Yo-Zuri Mag Darter and the Daiwa SP Minnow were very effective, but again, they come fitted with multiple trebles so these plugs should be modified. It is worth noting that a handful of bigger fish into the teens were pulled from among small fish on night tides, and specifically on these plugs, along with small needlefish plugs.

Having all of these small fish in the fishery provides hope that we will eventually have greater numbers of quality fish to catch in the years ahead. Treat these fish accordingly. The release process should be quick and easy and it’s possible to return most of these to the water in no more than 10 or 15 seconds – land them, thumb into the lower jaw, hook out and back into the water. Always carry a pair of thin nosed piers for the occasional fish that takes a bucktail or plastic deep in its throat. Pliers are easier on the fish than trying to force your hand into the small mouths of these fish. We must also rely on those who manage the resource to be conservative in their approach to ensure the population remains at high levels. Striped bass are the straw that stirs the drink for most recreational anglers in the Northeast. Data from NOAA Fisheries in 2016 revealed that striped bass far exceeded other species in number of pounds harvested. That number was 20 million pounds compared to dolphin (mahi) at 11 million and bluefish at 10 million pounds. 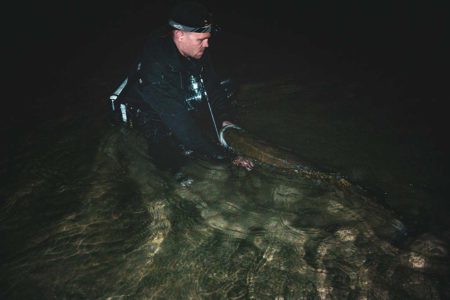 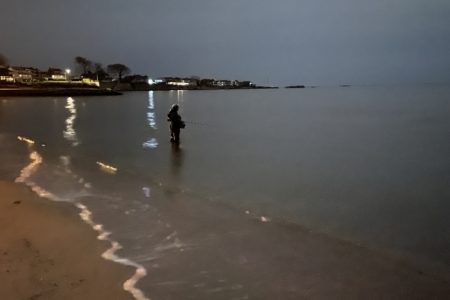