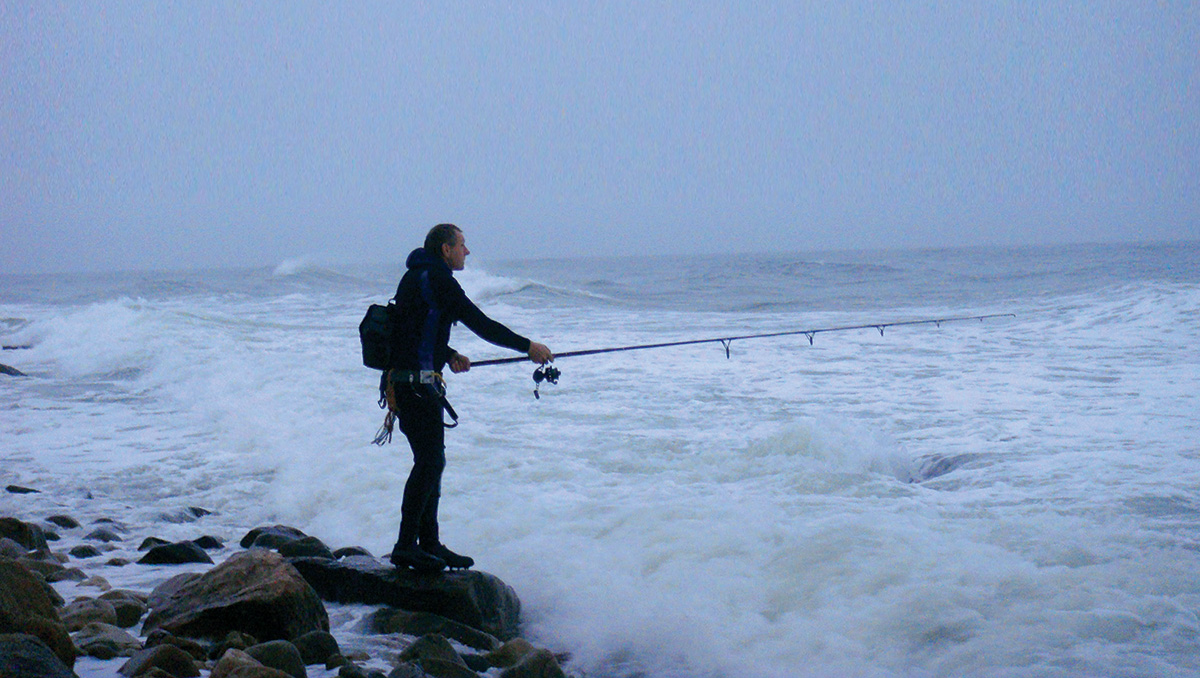 A veteran Montauk beach rat gives a peek into what he packs for tackling the Montauk surf.

Walking along the boulder-filled shoreline, my carbine studs scratching out a hold on bowling ball sized rocks, sparks lit up my trail. My point of entry is a line of outer rocks just ahead. Slipping into the cool waters of this early fall night, water quickly wicked up the back of my wetsuit sending shivers through my body. Swimming through the cresting waves, my rock was just a few easy strokes away. Unfortunately at my age, I no longer jump atop rocks as I once jumped on surf boards. Crawling my way atop as graceful as a seal, I stood before the vastness of the water before me, the tide flooding hard over the boulder-strewn shoreline of Montauk’s south side.

Releasing my carabiner clip, I swung my plug bag in front of me and pulled hard on the cover, the ripping sound of Velcro filling the still air surrounding me. Illuminating the selection of plugs, I pulled out the plug that I believed would coax a big striper out of its lair somewhere in the darkened waters that lay before me.

With the night sky filled with stars casting a glow over the ocean waters, I factored in the brightness of the night sky and removed a medium green and silver Super Strike Darter from my bag. Clipping my plug onto my snap, I cast up-tide about 30 degrees from my rock perch and quickly began a fast retrieve that pulled the darter deep into the rip before me. I slowed my retrieve to a crawl as the plug began to sweep along the reef, appearing as a struggling baitfish swimming against the tide as it sought shelter in the boulder strewn shallows. As the plug neared the apex of its swing in the current, my line came tight and I set up on a good fish.

The big striper quickly took full advantage of the current, my drag yielding a steady stream of braid as the fish bolted down-tide with water spraying from my spool into the night air. Soon the run is reduced to a series of bursts, and I can feel the rhythmic swish of the broad tail. They are long in duration – more confirmation that this is a good fish. As she rose to the surface, I could hear her struggling against my bent rod out in the dark waters. Slowly, she yielded to the pressure of a well set drag and powerful rod as I eased her closer to my rock. I guided her down-tide and behind me until I was able to grab my leader. Sliding my gloved hand down the length of leader, I grab her by the jaw and lifted her head out of the water. Not the massive cow I had intentions of, but a real good fish just the same, and the night was still young.

The questions often asked by many fishermen new to the Montauk surf is what do I bring and when do I use which plug? I can’t answer it exactly, but I can tell you after nearly 40 years of fishing the Montauk surf, what works for me.

Darters: I usually carry only Super Strike Zig Zag darters. I do carry anywhere from six to nine of them in various colors – or should I say tones. I do believe bass see color and that they respond to tone or a contrast of tones. For fishing on darker nights, I carry a selection of black and black/silver. Then I’ll pack greens; dark green against silver; dark green against white; and a lighter green against yellow or “parrot.” I then move to yellow, yellow and white, and light gold against white, to finally all white. This gives me a complete range of shades. I believe that shade (contrast or lack of) is more important than specific color. When fishing in the dark, color no longer exists – it’s all about shades.

Bottle Darter: The North Bar Bottle Darter is one of those plugs that can make or break a night. A cross between a bottle plug and a darter, this plug, whether loaded or not, can be a great producer under the right conditions. I carry this plug in just two shades – dark and light/dark.

Bottle Swimmer: I love the Super Strike and carry it in the appropriate colors for the night I’m fishing. Dark on new moons and light on moonlit tides. I do carry all three versions: rattling bee bees, regular and the old very long lip deep swimmer model. They are a must in heavy surf conditions.
I also pack a Sporting Wood bottle. This large swimming plug is ideal for matching big bait and catching big fish. When it comes to color, again, I match the ambient light of the night. Another large bottle plug is the Gibb’s Casting Swimmer. This plug has accounted for many big stripers in the Montauk surf, most under big surf conditions. I don’t care for the three hook arrangement but that is easily rectified by removing the middle treble and bumping up the size of the head and tail hook.

Needlefish: I don’t leave home without Super Strike Needles. I prefer the large size in both heavy and standard weight models. Again, I adjust colors to the night’s ambient light. I also carry a few specialized needles that I make myself from plastic such as the Monster Wadd at 8 inches long and with a diameter of 1-1/2 inches. It weighs in at 3-3/4 ounces. The floater comes in at 1-3/4 ounces. Finally, I carry a very heavy Stubby Needle with a Got Striper pintail attached that weighs in at 3 ounces. There are countless brands similar to these plugs on tackle shop shelves. Most are produced by custom plug builders, and they have proven themselves over and over again at Montauk.

Lip Swimmers: Both metal and plastic come and go out of my bag depending on where, the tide and time of the season. I love huge metal lips in summer and early fall in calm waters rigged to swim with a very erratic and exaggerated roll and tail wag. At the opposite end, I always include a small Rapala X-Rap and a 6-inch floating Bomber.

Poppers: Super Strike poppers are tough to beat for their durability and fish catching ability. I carry a couple of 2-3/8-ounce models, a couple of the 3-ounce models and a couple of the medium red-eye models for added distance, especially when the wind is in my face. A couple of pencil poppers are a must. These plugs when worked properly have the ability to raise fish when other surface plugs do not. Gibbs pencils are the most common on tackle shop shelves but there many, many custom jobs out there that work really well. When it comes to color for poppers, I keep it pretty basic – white, yellow and blue cover most of the bases. While poppers are primarily a dawn to dusk tool, keep in mind that slowly swimming a Super Strike popper has accounted for some good scores in the dark.

Tins: I do carry a couple – mostly Hopkins rigged with a tube tail, aka Montauk style, which works day and night. The tube tail consists of a short length of surgical tubing slipped up the shaft of the hook and comes straight off the hook. It can be wired or tie-wired at the top to hold it in place. I also pack a couple of West End (Charlie Graves models) tins to cover various conditions, especially when fishing the sand beaches.

Bucktails: I would never set foot in Montauk without a selection of bucktail jigs. Anyone who goes to Montauk without this lure is definitely ill prepared. They are an effective tool day or night. I always carry a selection from 1 to 1-1/2 ounces mostly in white with a few greens, and dress it with white, red or yellow pork rind or Fat Cow. I also pack a few 2- to 3-ounce jigs to deal with heavy surf conditions.