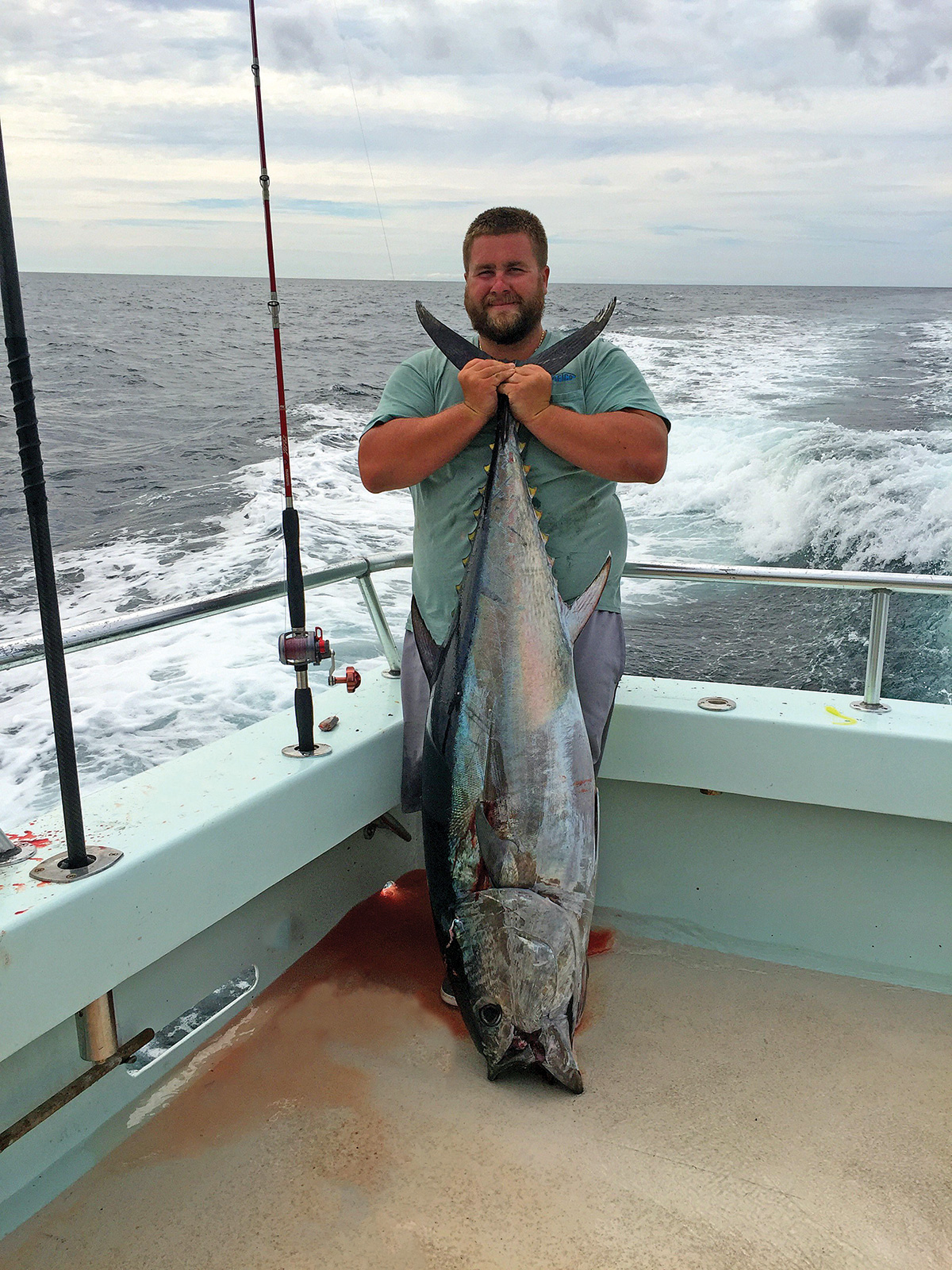 July 27, 2017, started like many other days. I arrived at the Viking 5 Star around 2 a.m. The weather was picturesque with optimal wind and sea conditions. Our first stop of the day, an area near Coxes Ledge, started somewhat underwhelming. We were picking away at ling and cod, when I made the ultimate decision to pitch my big ball of clam up towards the bow. As the bait made its descent as it had done numerous times up to this point, I felt a solid bump. I engaged the reel, cranking down until the line came taut. I quickly set the hook and my rod doubled over, followed by my line going slack. The bump had felt familiar. It certainly wasn’t a ling or cod, as the line slacked off. My friend Rocco was wearing a somber expression when I looked over at him, and I heard him say “Damn, we lost a good one.” I continued to reel as fast as I could, thinking the fish might be swimming towards the boat. When the line became taut again, it began to be ripped off the reel at an insane rate. It was at that point I knew I was hooked into a tuna.

Bobby, the boat’s mate, quickly yelled out “tuna,” as everyone on the boat began to grow excited. The captain yelled from the bridge to tell us that he had marked the fish I was hooked up with. My Release SG was getting smoked. The fish was taking out a considerable amount of line and in an attempt to avoid getting caught up in the anchor line I ran up to the anchor pulpit. As I continued to fight the fish, I applied continuous pressure to the spool, attempting to prevent my reel from getting completely dumped. After giving up nearly 200 yards of line, I managed to turn its head and begin gaining some line back.

The fight took me up the starboard side, around the bow, and down the port side. Just when I thought I was beginning to win the battle, the fish made another unstoppable run. The sound of tightly wound braid being torn off the reel as the fish continued to take line made it clear the fight was far from over. The battle continued back and forth as the fish made several more runs. As both the fish and I began to tire, I felt like I was finally gaining on him. As I got the fish straight up and down next to the boat, I began to feel the true weight of what I thought was likely a 50-pound fish. After about an hour, I got the first look at my top shot. I was both relieved and nervous as we began to prepare to get the fish on board. Just when I thought I had won, the fish made another run. Applying pressure once again to the spool burned my fingers, but eventually I was able to gain back the lost line.

I could now see the color, the silvery blue mass circling around and around neared the boat. I continued to reel down, trying to maintain the upward trajectory of the fish while trying not to break my rod. My fingertips were burnt and cramping. As I made big pumps, the fish began to corkscrew. On the third circle, Bobby sunk a gaff into the tuna. A second and third gaff followed shortly after. The boat erupted with cheers and high-fives around. I had completed one of my best fishing feats to date, catching a tuna on my Terez 8-foot boat rod and Release SG. Although no official weight was taken, the captain and crew estimated it at around the 110-pound mark. It was a great fight and the best part was that I was able to share the experience with several of my good fishing buddies who were along on the trip. 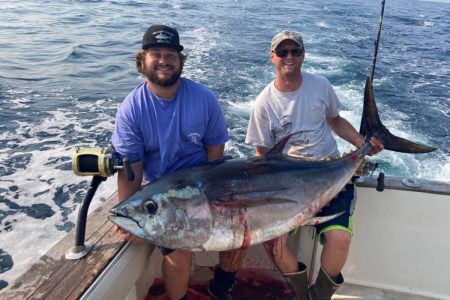