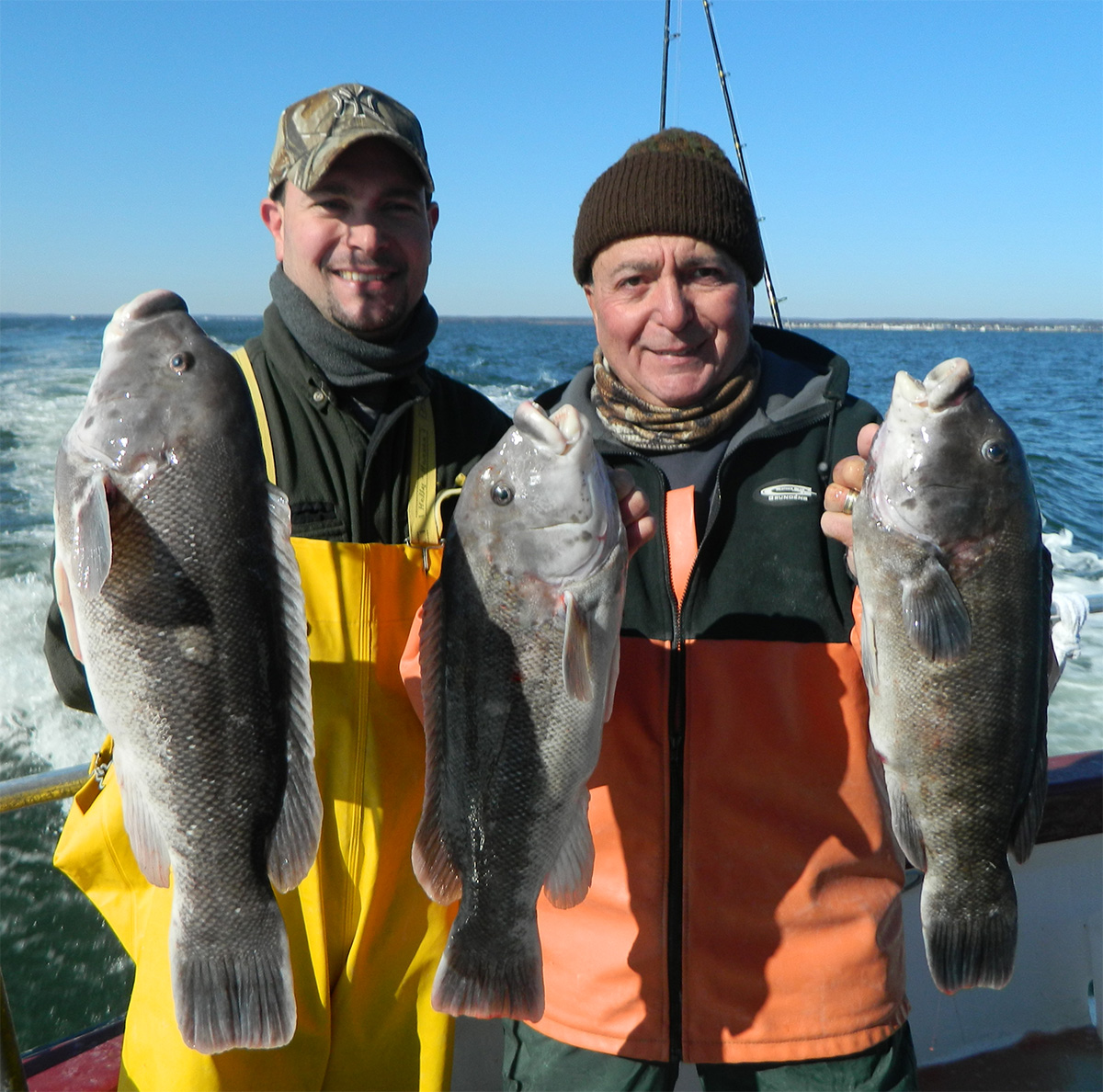 As a bottom fisherman, my heart misses a few beats when October rolls around because that means it’s time for my buddies and I to hit the launch ramp and head for some of the rocky points that dot the landscape of Long Island’s North Shore. The reason for the hype is clear; great fishing on forgiving bottom, which equates to easy anchoring over fertile bottom. Indeed the gloves come off and the light gear comes out as we pick away at assorted size tog. In fact, with a reliable small craft, and a bit of 101, anyone can have a blast catching tasty togs.

Nature intended the blackfish to be a reef/structure species attracted to just about any piece of bottom that has structure affixed to it. Artificial reefs and wrecks are typical blackfish habitats, however, it is a rock strewn bottom that is the natural home to a tog. Rocky bottoms attract all types of barnacles and crustaceans, particularly blue mussels, rock crabs and all types of juvenile shellfish, which make up much of a tog’s diet. These entrees are all available along the rock piles that protrude from the shoreline between City Island and Orient Point. As summer quickly fades to fall, and the equinox begins to cool the waters of Long Island Sound, blackfish begin their fall migration towards the inshore rocky shoreline. Usually during the early part of October, the blackfish will more than likely have to share the rocky lairs with sand porgies and pin sea bass until water temps drop to the magical number of 55 degrees at which time much of the baby scup and biscuits head off to the deeper, warmer water of the Sound to join their older and larger siblings. Back at the rocky shoreline, the togs hold down the fort until water temps plummet below 50 degrees at which time they too move off to deeper water and the warmth it provides. They will be seeking out rocky lairs that offer water temps between 55 and 50 degrees. As water temperatures drop below 50 degrees, which on the Sound usually occurs around mid-December, the tog become a pale whitish color and go into a semi dormant state until spring. Oddly enough, seldom do blackfish situate themselves in depths deeper than 150 feet.

The advantage of tog fishing along the North Shore is they are simple to get to and reasonably plentiful. Whether you’re a novice or a pro, or somewhere in between, you don’t need to test your anchoring skills as these areas are quite forgiving. Much of the bottom is chock full of rocks and marine life, unlike the South Shore where anchoring over a wreck must be precise and can be quite difficult when conditions are less than ideal. Instead, most of the rocky points and peninsulas that jut out from Stepping Stones, east to Orient Point, hold blackfish during October into early November. While some rocks are limited to groins and shallow water along the beach, just about every point has a spillover of boulders in deep water that surrounds the peninsulas. Most of this terrain rests in depths from 20 to 50 or more feet, which is the perfect lair for tog. While the west end of the Sound sees a good influx of keeper tog early in October, the fishing builds by the day as you travel east. Most of the shoreline will have a healthy mix of togs ranging from shorts to 6 pounds. However some brute white chins from 8 to 10 pounds are always a possibility. Areas like Crane’s Neck and Old Field Point generally give up togs from shorts to 4 pounds, whereas areas such as Truman Beach or Mulford Point tend to produce more fish in the 3- to 5-pound range. Forget those monster tog of yesteryear. Unless you have a wreck in the Sound that pretty much belongs to you, the effectiveness of today’s electronics has contributed to reducing the population of big white chins, as has the out of control live blackfish market and illegal pot and trap fishing taking place on the Sound. The latter is a subject for another time.

Since there is always the chance your next tog may reach double digit proportions, it’s always better to be safe than sorry. Both mono and braid will take a good beating rubbing against the structure laden bottom. Therefore, a baitcasting or conventional outfit in the 20- to 30-pound class is preferred over lighter gear. My favorite combo is the 7-foot KastKing PE-C701MF baitcaster rod joined with an Ecooda Tiro Caster EX reel loaded up with 30-pound KastKing braid. The combo has withstood the stubbornness of some slob togs quite handily. The outfit is light in weight and comfortable to fish with for long periods of time. As for rigs, a few blackfish enthusiasts still employ a standard rig consisting of either one or two Virginia style number 3 through 5 hooks tied to a 12-inch snelled leader, either hi-lo or tandem style. This can be fished either on a dropper loop a few inches above the sinker or as a tandem rig tied directly to the line 2 or 3 inches above the sinker. Due to the abundance of rocks in the Sound, I strongly suggest sticking with the one hook rig as you cut the risk of the second hook grabbing hold to a piece of structure. In addition, you’ll spend more time fishing and less time re-rigging. My favorite blackfish rig for the rocky lairs of the Sound consists of approximately 8 feet of 50-pound fluorocarbon or mono leader with a dropper loop tied 12 to 18 inches above the sinker. I attach a super sharp Gamakatsu 3/0 Octopus hook pre-snelled to a short 6-inch leader, which allows for less twisting of the line, which equates to minimal spin of the baited rig and quick penetration to the mouth of an unsuspecting tog. This particular rig can be used effectively in most of the rock and wreck laden areas in Long Island Sound. Sinkers round out the terminal end, simply applying it to a surgeon’s end loop knot. Since the speed of the current will vary depending upon lunar phase and wind conditions at the time, it is best to carry an assortment of sinkers between 3 and 12 ounces to cover most situations. Make sure you have plenty of extra leader material, hooks and sinkers on hand as it is inevitable some rigs will succumb to the sticky bottom.

As for bait, green crabs are the simplest to obtain making them the most common choice among anglers. While the greenies will often get the job done, especially as water temps begin to cool, Asian crabs are on the A-list in rocky terrain. Using them whole by running the hook right through the middle of their bodies is the ticket. Understand that in recent years Asian crabs have plagued the rocky shorelines that protrude along much of the Northeast. To obtain a day’s supply is as simple as visiting a rocky strewn shoreline along the North Shore during low tide, turn over a few rocks and the Asians will look to scat away. Trust me, they are quick. If you plan on fishing the crabs in a day or two, you can keep them healthy in a container in the refrigerator. A few days out of water will have them perishing, which will cause your spouse to throw you and the awful smelling crabs out. The best case scenario is keep a live bait cart alongside your boat or dock. Under those conditions, you can keep them lively for as long as you need. Should the challenge of gathering a can full of Asians be out of the question, you can call around and try to find a shop that stocks them. Jack’s Bait and Tackle in City Island has been a good source in the past but they do sell out quickly. It is worth traveling for these baits since they often produce when all other baits fail. Stone crabs (aka white crabs) are a natural enemy to the tog and are top notch bait later in the season when the water gets cooler and the tog are in deep water. They are best fished whole on a Snafu rig where the big white chins live. Therefore I wouldn’t apply too much effort to obtain them. You will be much better off obtaining and employing the Asian crabs.

Regardless of whether you fish reefs, rocks or wrecks, it is essential to have the proper electronics on board. A good quality bottom recorder is paramount as it will paint the picture of what lies below. Once a favorable piece has been found, a GPS plotter is a huge help to mark potential spots using the MOB feature to assist in anchoring over prime turf. Charts are a great source of pinpointing spots that seem to have potential and deserve further exploration.

Anchoring when targeting blackfish is always critically important, especially among the rocks and strong currents. Anchors must have an ample supply of rope to hold and move around over an area of structure. Keep in mind that the productive depth may vary; therefore, make sure you have enough rope to handle depths from 20 to 50 feet. Since there is always the possibility of the anchor getting wedged in between rocks, you should always have a backup plan with at least another anchor, chain and rope. Speaking of chain make sure you have a least 12 feet of solid galvanized chain that is suited for the size anchor you employ. Remember, the longer the chain the quicker it will set, giving better control and fluctuation when setting up over a preferred spot. When it becomes time to lift the anchor, you’ll want to resort to an anchor ball, which makes life a lot easier, especially when the current is running hard.

Keep in mind that the Sound can kick up in a hurry under the wrong wind conditions. Winds from the south and southwest are ideal as well as light winds from the north and west. However if the forecast is predicted to blow hard out of the northwest, west, northeast or east, plan for another day. Make sure your VHF is in good working order and the PFDs are within easy reach of everyone on board. As always, please obey bag and size limits.