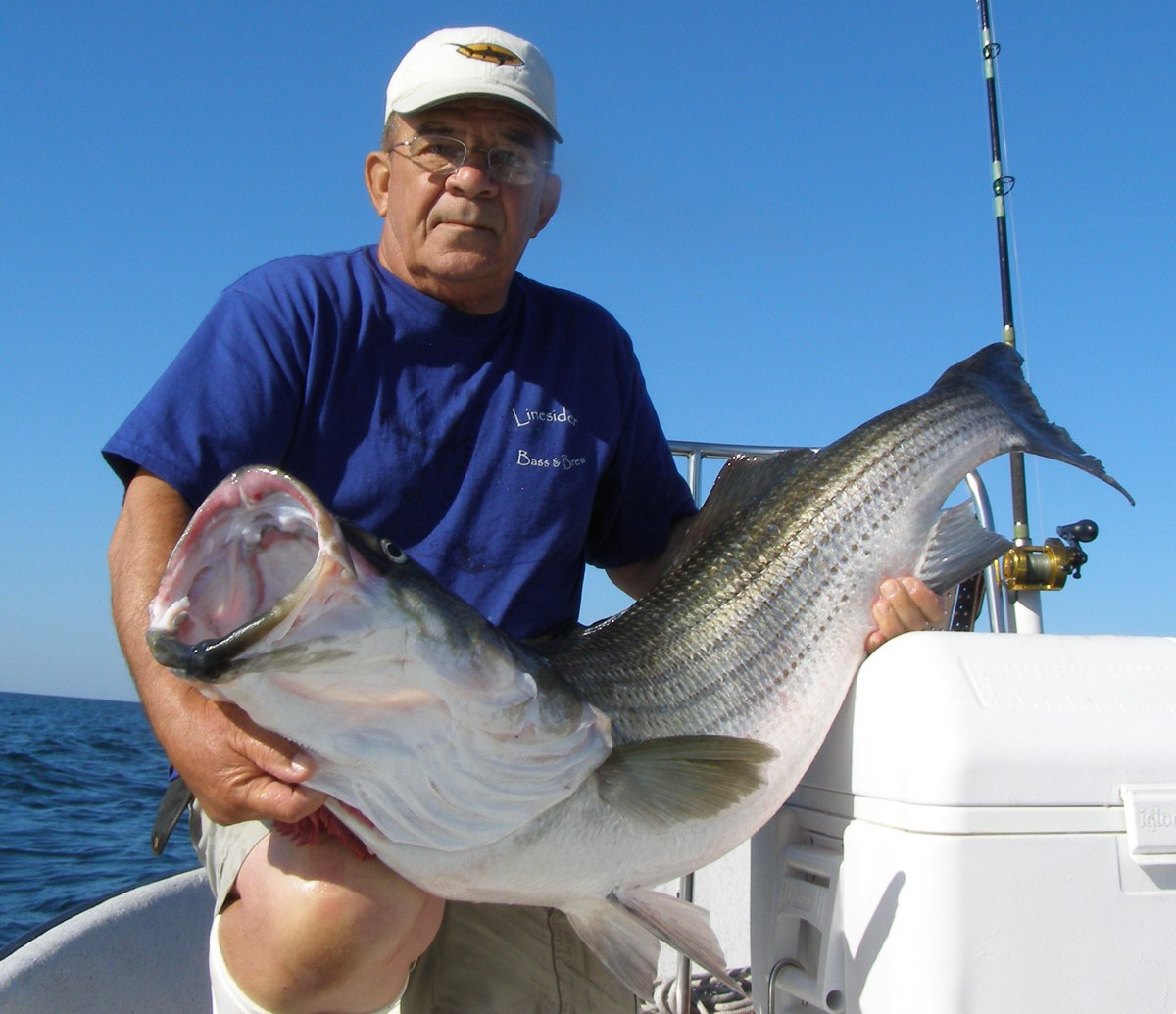 A standard from the traditional striper man’s playbook, the tube and worm is an effective tactic throughout the seasons.

No sooner were the words out of his mouth when his rod bent into an arc that triggered a slip and stumble toward the stern. I planted my open hand square into his chest to prevent him from falling into the motor well as he attempted to regain his balance, along with his composure. “Why in the world would a striper want to hit this piece of plastic and worm when they have all those big schools of bunker the blues are tearing into?” he questioned. I told him to keep his rod tip up and move his left hand further up the grip as the balance of the lead line dumped from the Penn 30 LD followed by a good shot of backing. I cranked down hard to get my tube out of the way when an opportunistic bluefish, feeding about 25 feet higher up in the water column took hold.

It was a cloudy weekday afternoon without another boat in sight, and we had all the action to ourselves. After the last of the three 10-pound blues ate my bone Tsunami popper I put down my rod and watched my deck-mate do battle with the angry yellow-eyes. They were making a bloody mess of the cockpit, not to mention his new $99 Sperry boat shoes, but he was all smiles. I stayed with the alligators because a friend had put in an order for a “mess” of blues for his big smoker. 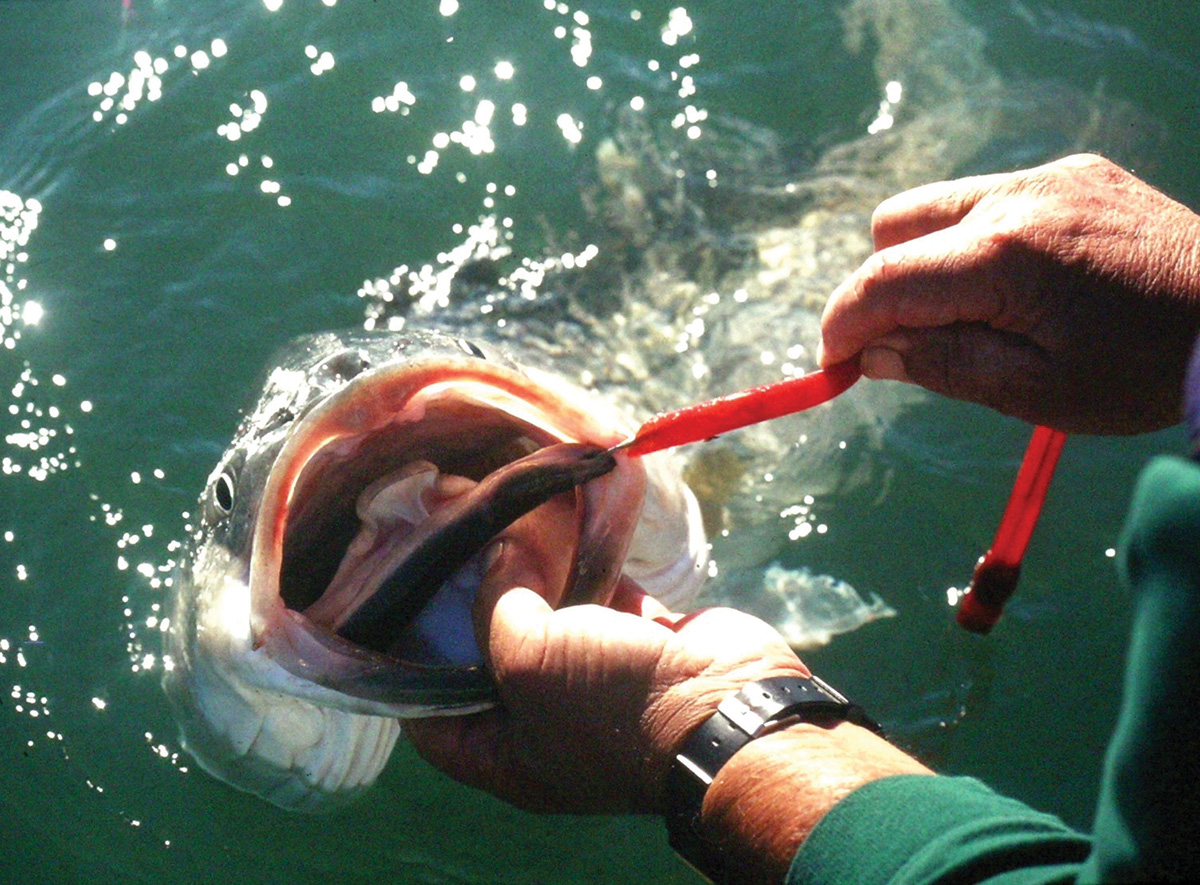 When my friend’s wrists and shoulder muscles began to protest loud enough so that I could almost hear them yell “stop,” he put down his rod and let out a sigh. I asked if he had enough, which produced a twinkle and an admission that this was too much like working. After admitting that he’d never really believed that stripers mopped up leftovers he eluded to the fact that a sea worm on a length of tubing was not in the same league as a live menhaden, but it was obvious that first fish had him wondering.

After picking off two more stripers in the 15- to 18-pound class along the edges of the bunker schools he asked me if I could put together a couple of tube and worm rigs for him, similar to the ones we were using. Chalk up another convert to the deadly combo!

When I brought my first book (pamphlet) on the tube and worm to one of my Fisherman seminars in Mystic, CT, I sold all 30 copies of that 24-page, 8-1/2 X 11 guide and took orders for 27 more. The Fisherman’s New England editor at the time, the late Tim Coleman, took notice and suggested, “You just might have something there.”

Fast forward 37 years later and the tube and worm is one of the most popular and well-established methods for taking quality stripers in broad daylight. I recall the early days when I was still tweaking my gear and presentations and heading out of a popular harbor at daybreak while a dozen or more boats were chasing bunker schools, trying to snag enough bait for a day’s fishing. With three-dozen worms secured in bedding I headed out to the ledges and trolled up some pretty impressive catches only to return and find that half of those boats were still trying to fill their bait wells. The ubiquitous sea worm is the key. 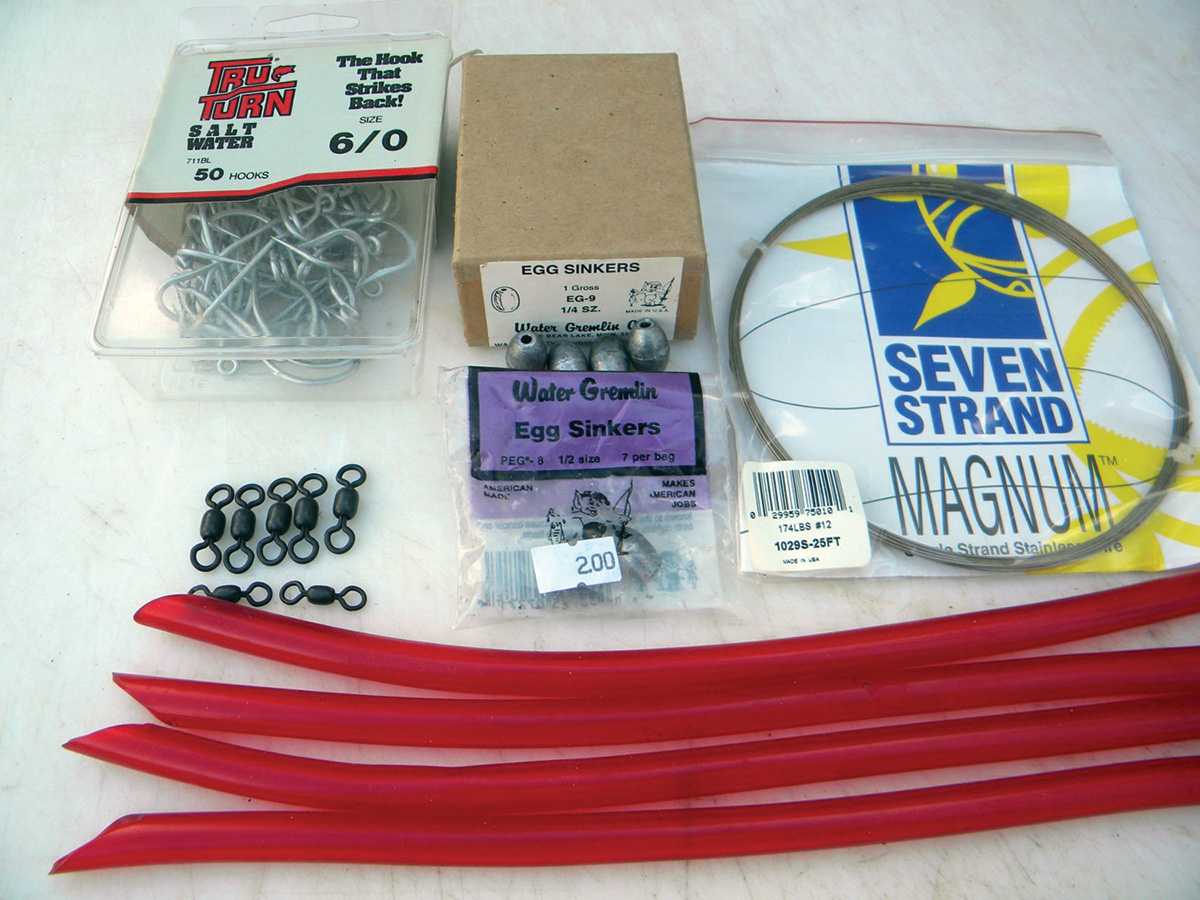 Unlike menhaden, mackerel and even the famous “snakelike bass candy,” no elaborate livewells or bait systems are required. Three-dozen fresh worms can be kept in bedding for up to two weeks or more when provided minimal care. The story changes with this system because a visit to the bait shop can be effected days before your intended trip so there are no early-morning lines to battle. Take the container from your refrigerator and put it in the boat’s cooler and you are off to the fishing grounds.

There was a time when I could dig my own worms, and if the law permitted it I could still find a few locations where I could scratch up a few dozen worms, but that is hard, backbreaking work back in an era when I was happy to receive 20 cents a dozen. Today worms are just under $10 a dozen so it just makes good sense to take care of your striper baits and extend their life.

To have bait on hand, at the ready for a spur of the moment trip I pack them in worm bedding from either Frabil or Buss. They are almost if not identical and when mixed with pure saltwater in a damp-but-lumpy consistency, they will keep a few dozen alive for over two weeks. It’s not a lot of trouble and it’s certainly worth the effort.

For those who are skeptical about a large striper taking a worm in the presence of pieces of falling chunks and wounded bunker allow me to share my insight. By the time a striper grows to legal size it has already developed an affinity for various species of saltwater worms. I also believe a striper will choose bunker over worms, hands down, but our seven-striped fish are opportunistic feeders, and I have had specimens in the 30-pound class attack a tube and worm rig trolled under and around a school of pogies. They did this not because they were hungry, but because they were pissed. How dare you come into my kitchen? They hit the worms out of anger and instinct and not hunger or preference for worms over menhaden.

While on the subject of trolling allow me to offer you my thoughts on presentation. Some practitioners of my favorite method will twist and bend tubes to get them to spin and gyrate in the water. I prefer a straight subtle tube that serves as the vehicle that presents the worm in the striper’s domain in a natural fashion. Call me foolish but I believe the most natural presentation is what convinces the larger specimens to lose any apprehension about eating the worms. Humor me and take a bucket of saltwater and place a live sea worm in it; then watch it in its natural state. The worm does not spin, whirl or twist; it moves slowly with the same motion as an eel or a snake. That is its natural mode of propulsion.

Sure, you can fish with gyrating and spinning tubes, it happens every day and those lures catch fish. But just back up for a moment. Are you missing larger fish that are turned off by all that un-natural motion? It’s something to consider. My intent is not to dissuade you from your current technique, I am merely sharing my own techniques developed over the past 50 years, a method that has accounted for two 50-pound plus stripers, and an uncalculated number of 40- and 30-pound stripers from my boat. I also know of quite a few other 50s by clients who my use my tubes or similar conveyances with the same baits and practices.

When I began tweaking my tubes in the early ‘60s it was strictly a live bait (sea worms) and whip eels, until the worm strikes when I used squid strips and bluefish skins and kept on catching. There are a few more choices today including the Berkley scented sea worms and Captain Bruce’s scented Otter Tails. My grandson had 31- and 34-pound stripers and a few alligator blues on the longer Otter tails in red, and they kept on fishing for the rest of the day with a few holes in them they were none the worse for wear.

Over the past 10 years I have had the occasion to use a few tubes other than my own, including the A&S, Otter, and Pete Santini’s tubes. With a juicy sea worm attached to the rear hook they all caught stripers. My favorite outfits for trolling the tubes is a lightweight, yet fast action custom 6-foot boat rod with a Penn Squall 30 LW filled with 150 yards of 50-pound backing and five colors (150 feet) of 36-pound test lead line. At the business end, I use Tsunami swivels and 15 to 18 feet of 50-pound fluorocarbon leader. The leader is tied directly to the swivel at the top of the tube without any snaps or hardware. I want the stripers to concentrate on the worm, not any hardware distractions.

My Evinrude E-Tec can get me under 2 knots, which is where I like to be, but if you can keep your speed under 3 knots you will catch the bigger fish that won’t chase tubes going much faster. This is the best time of the season to be on the water and with a tube and worm outfit your chances of scoring a trophy fish before the snow flies will never be better.