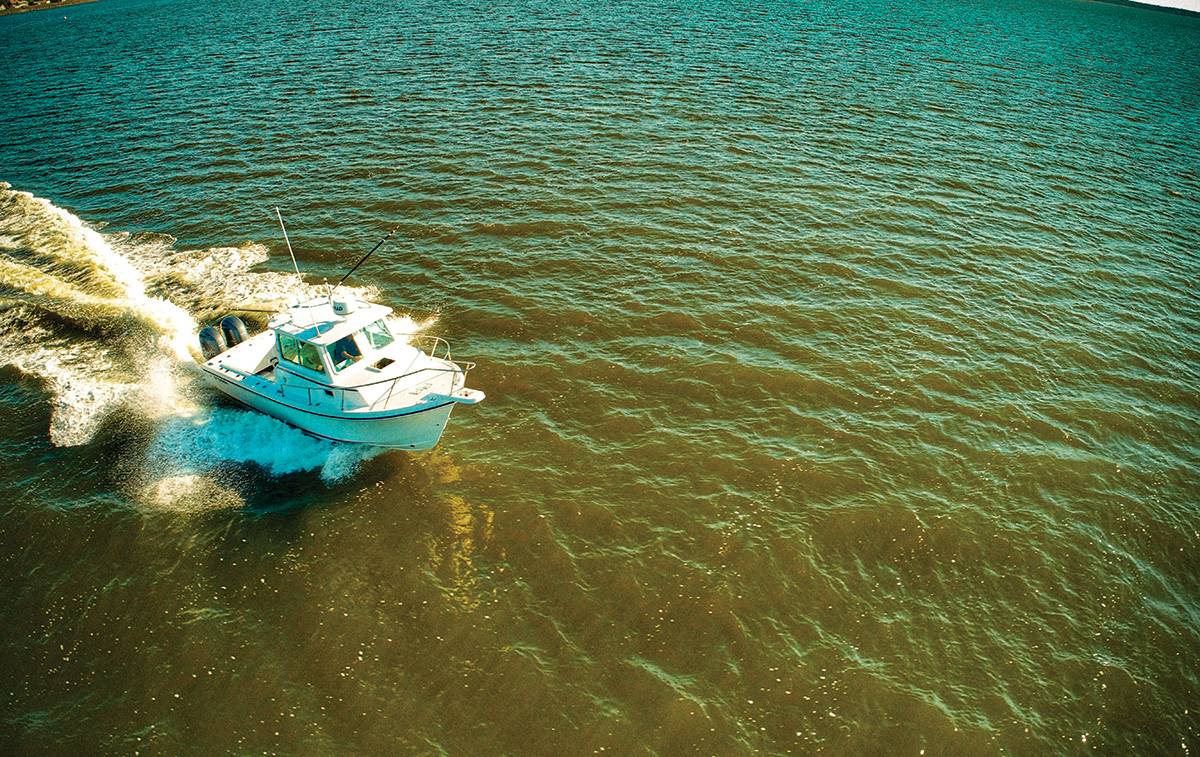 If you have been following this series of articles over the course of the year, you have come to realize that there are at least six different sportfishing boat layouts that are popular with Northeast coastal anglers. These are open skiffs, center consoles, dual consoles, walkaround cuddies, express cuddies, and pilot house designs with either an open back wall or with a full house enclosure. Which of these do you think are true three-season sportfishers? Read on to find out more.

I currently own two EdgeWater center consoles (185cc and 228cc), but I do not consider them to be true three-season fishing boats, at least not up here in the Northeast. The larger of my two EdgeWater CCs is equipped with front and side EZ2CY clear side curtains surrounding the large center console command station, plus an XL T-Top framework with a Sunbrella canvas top that offers some basic protection from the sun, rain, wind and spray. However, there have been a few times in late November when the weather turned nasty that caused me to wonder what I was doing out there in this rig looking for a few lonely stripers along the beach or beating back into the north wind coming home from a 30-fathom wreck trip. Unless you invest in full curtain enclosures, either from the manufacturer, or a custom shop, the same question of weather protection applies to dual consoles and open skiffs. They are all wonderful boat layouts in the proper weather conditions from mid-May through early October, but when the wind shifts to the northern quarters and the sun goes down at 4:30, there’s nothing like a cuddy or walkaround with full canvas and a rear drop curtain, or a pilot house with built-in 360-degree wind and weather protection to head to your favorite wreck offshore or striper hole along the beach. Let’s spend some additional ink on detailing what makes these cabin boat designs the real deal for early and late season fishing.

Back in the ‘80s and ‘90s, the walkaround cuddy cabin layout was king in Northeast coastal areas and for good reasons. It offered the ability to add an optional hardtop overhead to shield you from sun and rain. If you added clear isinglass curtains forward and to each side, combined with an aft drop curtain, this enhanced the crew’s experience from inclement conditions even more with excellent spray protection. I can distinctly remember some late season tuna trips coming back from the Mud Hole west, the triple wreck area 58 nautical miles southeast of Fire Island and late season Coimbra trips where the wind and weather conditions were absolutely awful. My undersized 23- and 24-Grady walkaround cuddies were up to the task of beating it back to home port and the added cost of the 360-degree canvas paid for itself on dozens of trips where we were literally taking waves and wind-driven spray over the hardtop, having it cascade off the back like a waterfall. This is where the Grady’s and other manufacturers’ self-bailing decks also paid dividends, directing all of that green water to the aft scuppers and directly overboard. The cabins in my various walkarounds usually offered a dedicated head area for the crew to take care of business when nature called in privacy during extended days offshore, plus welcome rod storage, plenty of nooks and crannies for tackle, plus a vee-berth to grab some shuteye in between bites. 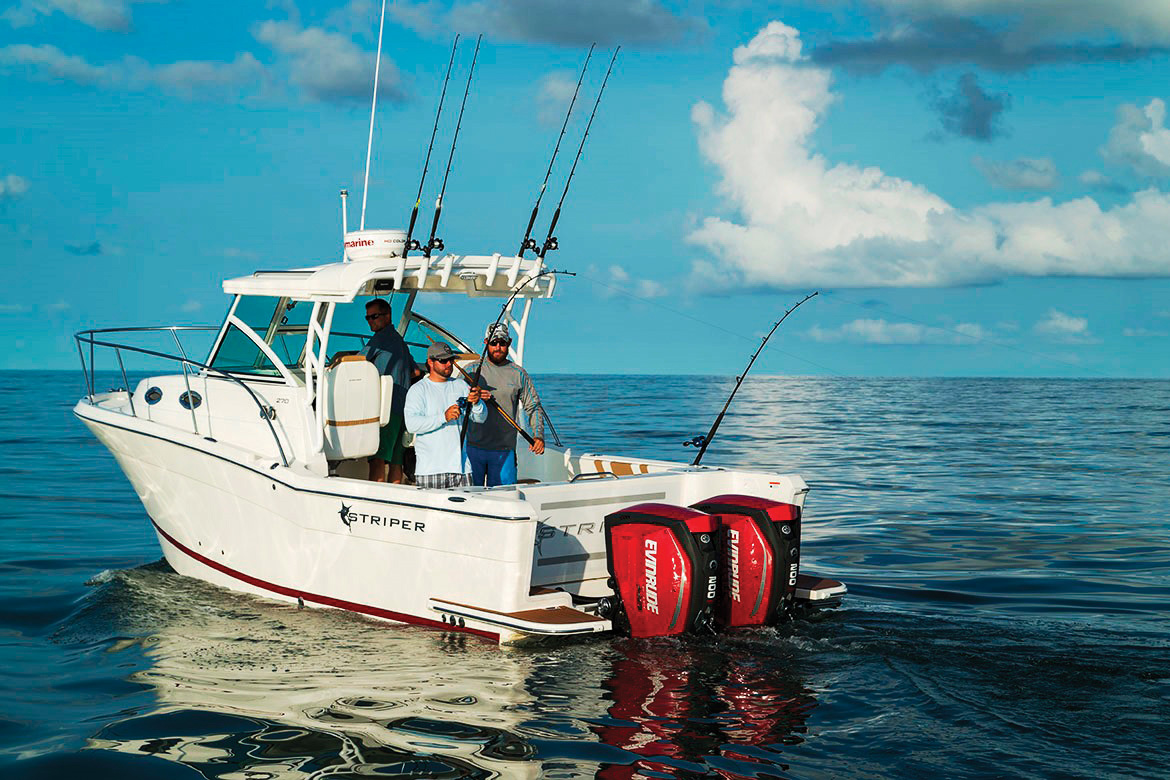 On the downside, true walkarounds from any builder’s stable have a few nits that must be dealt with, especially when running offshore. The recessed walkaround design typically compresses sitting/standing elbow room for the crew, both topsides in the helm area and down below in the cabin. It also provides a direct channel to collect wind-driven spray onboard, which then dumps back into the cockpit area, hence the requirement for a true self bailing deck with oversized scuppers to evacuate that unwelcome seawater ASAP. Although the concept of a walkaround is truly ideal when idling in or out of your space at dockside or drifting in a protected bay, it’s still somewhat of a challenge to use this narrow walkway when out in a seaway while anchoring or working an energetic pelagic around the bow. Sure, it can be done (and I’ve done it more times than I care to admit), but you are adding some extra risk to the trip during these escapades and you only have to be unlucky once to regret it.

Still, the benefits of the true walkaround design outweigh the negatives, which can be minimized as long as you know that they exist. The walkaround cuddy definitely qualifies as a three-season sportfisher and I would have no issues taking one out for a mid-March cod wreck excursion, or doing a late November striper, sea bass or tuna trip. As long as the walkaround in question had a hardtop and a 360-degree protective canvas enclosure, I would be totally good to go and so should you.

Flush deck cuddies are the classic cabin boat design for both inboards and outboards. They have made a resurgence lately as the walkaround cuddy layout has fallen victim to the vagaries of cyclical shifts in consumer demand, which seems to prefer the dual console layout as the hot ticket for the latest generation of northeast anglers and boaters. When I look back at the 15 boats that have worn the MarCeeJay nametag on their transoms, the one that comes to mind as being the most fishable and weatherproof of them all was my beloved 27-Phoenix. Although the majority of 27-Phoenix cuddies were twin inboard designs, I owned one of the 200 that were manufactured as classic twin outboard transom cutouts.  The beauty of this design was its single level cockpit that allowed for plenty of fishing room aft and lots of space under the protective hardtop. I can distinctly recall the clap of thunder and pelting rain on the hardtop when shark fishing or tuna chunking, while captain and crew were huddled under the hardtop with the drop curtain down, totally protected from the elements and thankful for this ergonomic and weather friendly design. 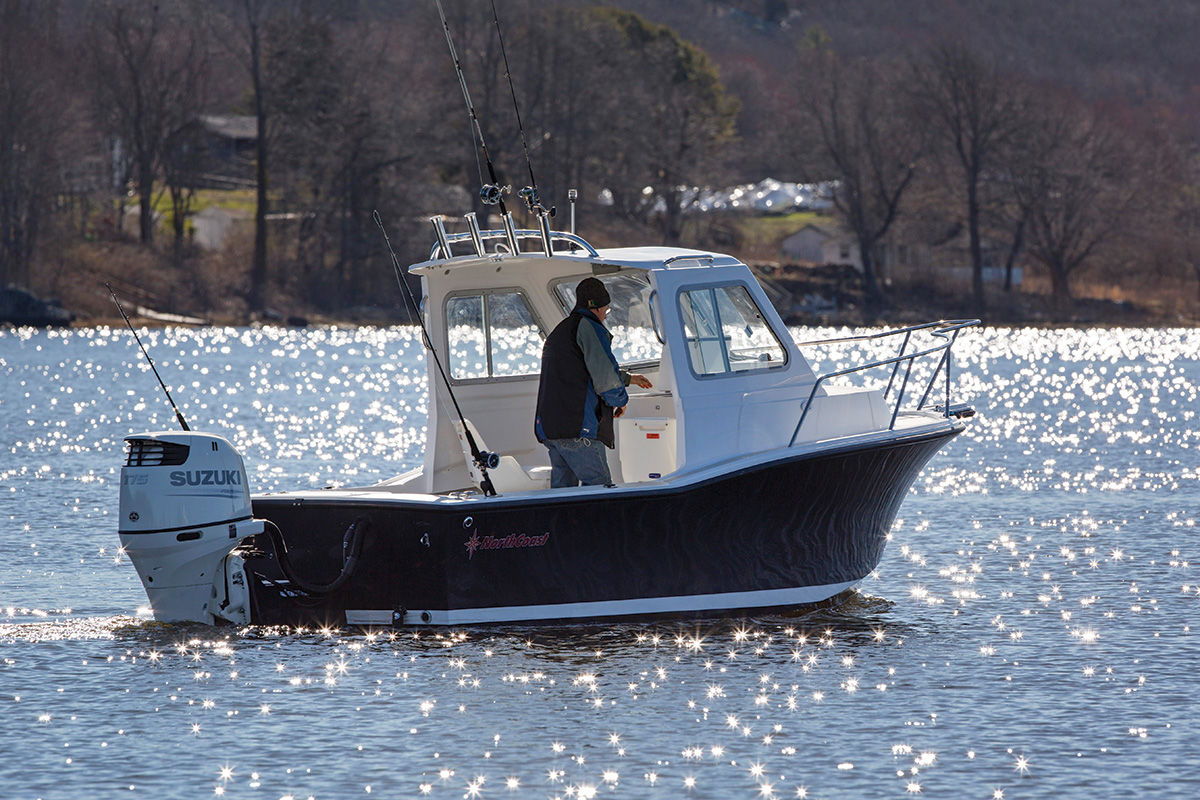 Classic cuddy cabin designs typically shed any wind-driven rain, spray and waves off the side decks and overboard before any of it reaches the cockpit sole, which is an improvement over the walkaround layout. Some boat builders actually add or build in a raised fiberglass or Starboard dam or water-diverter into the side decks to enhance this water directing feature. Some boats feature level side decks 10 inches wide, which allow easy passage fore-and-aft when tending dock lines back at the marina, or going forward to tend the anchor in the bay. Grab rails on the hardtop and the full height stainless steel bow rail provide welcome handholds during these maneuvers. When needing to work the hook on an offshore wreck, if sea conditions were rough, some models feature a forward hatch that could be accessed via the cabin that helped get this job done with minimal risk to the crew. Flush deck cuddies in general offer improved helm and cabin space compared to walkaround designs and the more spacious helm area usually allows a few more of the crew to stay dry during unfavorable weather conditions. When outfitted with 360-degree canvas and isinglass curtains, this layout is perfect for fishing three seasons in max comfort.

Pilot House and their Variants

If you are searching for the ultimate in weather protection and creature comforts for you and the crew for your bona fide three-season sportfisher, it’s tough to beat the pilot house model variants. Boat builders like Steiger, Parker, NorthCoast, Defender and others have made their bones designing and producing pilot houses, as have some of the inboard diesel lobster boat builders like Duffy, Dyer, BHM, Wesmac, Beal, etc. 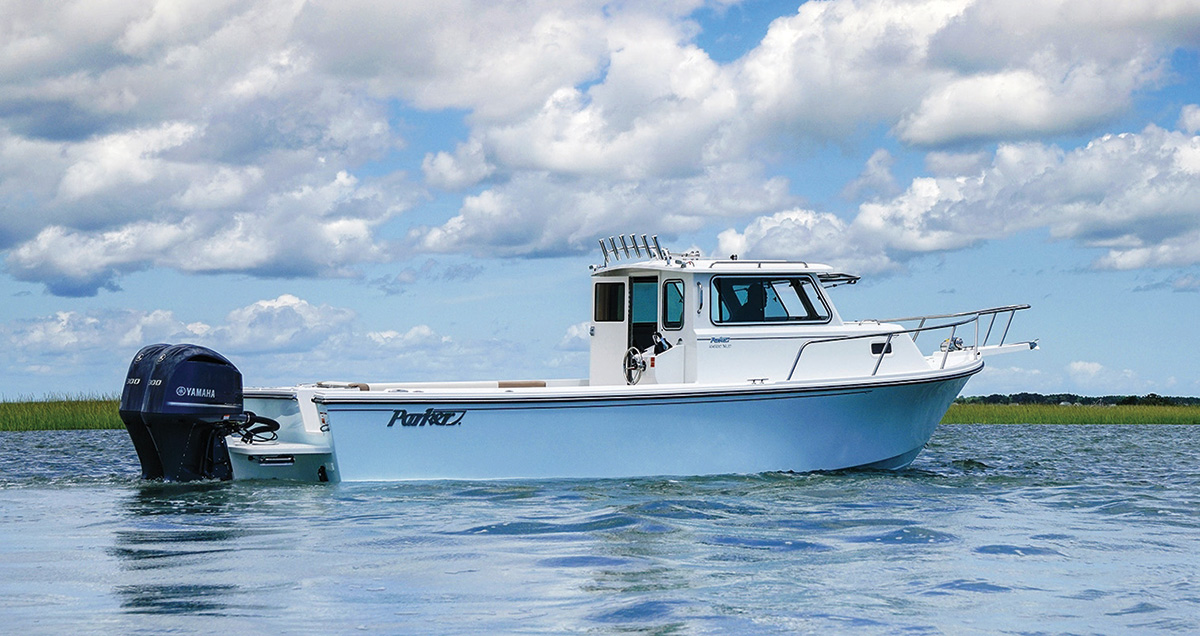 Sticking to the outboard powered models for this review, pilot house style craft are offered in a number of different models that look similar externally, but feature unique and subtle differences that separate them from the pack. Long Island builder Steiger Craft boats in Bellport, NY for example has been evolving their pilot house craft over the years and has a dedicated following that is growing with each passing season as their designs satisfy specific customer demands. Their pilot house boats are divided into two groups, specifically the open back “Miami” style and the fully enclosed house “Chesapeake” models. Each has advantages and disadvantages, but according to owner Al Steiger, the Miami style three-sided house was created for southern anglers who wanted the weather protection in the front and on the sides, but desired to “open things up” a bit to stay close to the cockpit action, also requesting enhanced air circulation in the enclosed house section during those scorching summer days. Sliding side windows, pop-open front windows and a drop curtain aft solve all of the weather protection and ventilation problems for this three-season sportfisher that made its debut at the Miami boat show years back, hence its unique name. The level deck transition from cockpit to cabin is also a nice feature and creates enhanced visibility forward at the helm and a higher house section to keep spray off of the crew when working in the cockpit. Steiger Craft’s Chesapeake pilot house models feature the traditional four-sided enclosure, with a locking fiberglass door on the aft cabin bulkhead.

Parker Boats located down in North Carolina also manufactures a fleet of popular pilot house craft ranging in size from 21 to 28 feet in length. All of these employ the traditional four-sided house enclosures and feature full width flush cuddy designs for added room in the helm and v-berth areas, with a modest step-down from the cockpit into the cuddy cabin. The 25- and 28-foot Parker “Sport Cabin” pilot house models feature extra-wide 9.5-foot beams and a 21-degree aft deadrise hull design. Parker also offers a 25 Extended Cabin model that borrows some space from the generous sized cockpit and adds it to the cabin area for additional crew comfort during your three-season angling escapades.

NorthCoast Boats based in Bristol, Rhode Island offers three hard top cabin models in their lineup. Their 21-, 23- and 27-foot models feature open rears with plenty of cockpit space for fishing. The 21-footer’s standard engine bracket provides for a huge cockpit area for fighting fish, along with the safety advantages of a full transom. The full interior hull liner features a molded two-tone non-skid surface. The 23-footer’s cabin is outfitted with a two-tone fiberglass headliner and a molded fiberglass interior v-berth with storage below. The pilot house is a spacious 5 feet with well over 6 feet of headroom. You can opt for transom or platform mounted outboards. Their newest pilot house design, a sleek 27-footer, offers two full size berths, a stand up head area and plenty of storage. This boat is available in a variety of layout options to suit the owner, such as reconfiguring the galley into an efficient tackle station. All three models make the cut as three-season fishing machines.

So there you have it, some really great choices if you are looking to step up to a true three-season fishing machine. All offer numerous options that allow you to tailor your boat to meet your specific fishing needs. And when the weather turns snotty, these boats will provide the protection you need to keep on fishing. 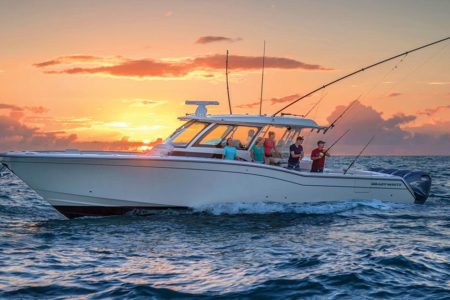 The one thing all of our fishing boats typically have in common is the reliance on some sort of 12-volt marine power cell to either start up the engine(s), run the electrical system, or both. 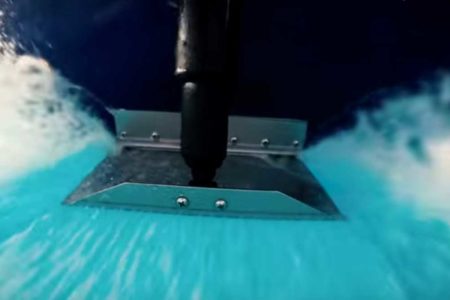 All You Need to Know About Trim Tabs

A soup to nuts tutorial on choosing, using and maintaining trim tabs. 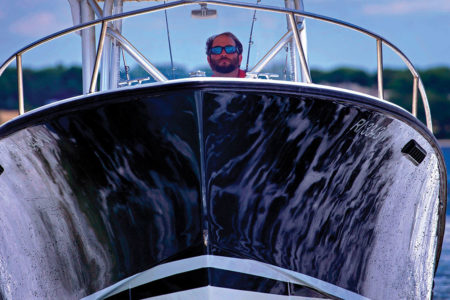 Just because you can see the paint, don’t assume that it is working up to speed.