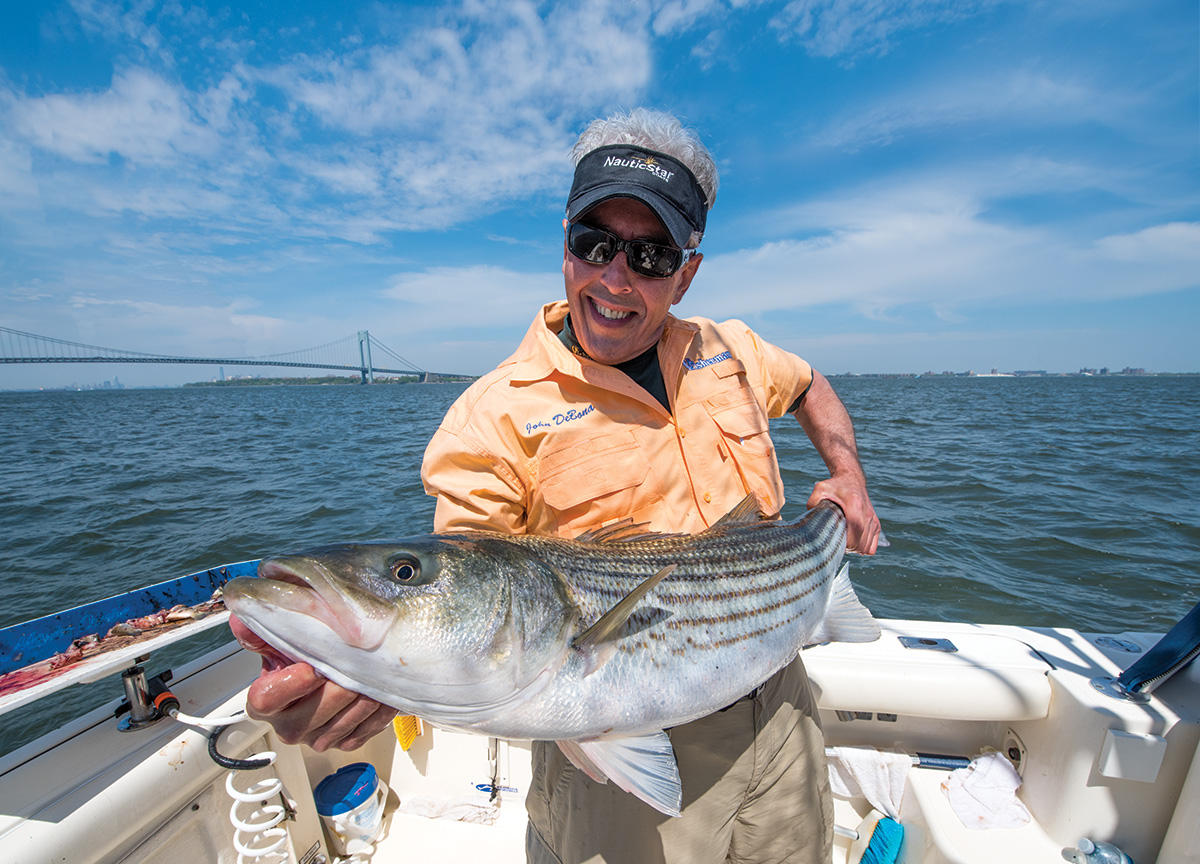 How to make sure the dinner bell is heard loud and clear in swifter currents.

For many anglers, chunking for striped bass is a seasonal staple along the striper coast, extending from southern Maine down through lower end of the Chesapeake in Virginia.  In my New York and New Jersey neck of the woods in particular, a spring or fall striper trip almost always begins with a cooler full of fresh bunker.

I’ll buy a couple dozen of the freshest bunker I can get my hands on from the local bait and tackle shops as insurance, though I’m always hoping to throw a cast net on 50 or so more bunker to use as hook baits for the trip. In this ideal scenario, the store bought bunker is designated to fuel the chum/chunking slick created when throwing handfuls of bunker pieces around the boat, the cast net haul nearly exclusively for baits.

But here’s where we get technical on getting the chunks deep. Striped bass feed most aggressively on a moving tide, and oftentimes the bite kicks into gear along with the current. When anchored, tossing overboard “freebies” or quarter-sized pieces of chopped bunker helps draw stripers away from the structure while initiating a feeding frenzy beneath the boat. This especially works well during the slowest stages of the current.

But what happens when the current starts cooking at 2 knots? Sure you might be stimulating a feeding frenzy by tossing in chunks of bunker—but at the rate your chunks are drifting off with the tide, that frenzy might be taking place 200 yards or more behind the boat! The current is sweeping those unweighted chunks away so quickly that by the time they have a chance to settle low enough in the water column, you have effectively drawn the bass away from your boat and mostly out of casting range.

The question is how to take advantage of the fish-attracting benefits of chunking/chumming while the current is running hard?

The art of deep chunking has evolved significantly over the years, and many captains have created their own methods for delivering a chum slick deep in swift current. Over-sized wire mesh chum pots with lead-weighted bottoms popularized by winter flounder and porgy fishermen can be stuffed with chunks of bunker or clam and sent down to the bottom on a thin rope to draw fish under the boat by scent alone. This method is an improvement over free floating chunks or no chunks at all, but still lacks the benefit of the Hansel and Gretel effect; that is delivering a trail of tiny morsels for bass to feed on right up to a hooked bait, positioned behind the transom of your boat.

Here’s where creativity and some good ol’ fashion ingenuity have come into play. Many years back, when the striper season first got underway and while the water was still on the chilly side, I’d begin the season chumming clams. I’d sink two weighted mesh pots loaded with crushed clam shells and clam scraps to the bottom and give them a shake or two every so often. This was a very effective method for luring in semi-lethargic bass in 50-degree water. However, to almost guarantee a strike, I’d dump a dozen whole clams from the burlap bag into a 5-gallon bucket and smash them to pieces with an aluminum baseball bat. Then, I’d proceed to dump clam fragments over the transom and watch as the shells and remnants dispersed erratically in the sweeping current in a cloud of bass-attracting goodness. Rest assured, a strike on one of the clam adorned hooks almost always followed shortly after the chum-bomb was deployed.

To help this process work more efficiently, I’ve then experimented in placing a dozen clams into a brick-weighted burlap bag and tied with a thin rope from the bottom of the bag with the top left open. I’d smash up the clam contents and immediately sink the bag. As I shook the rope, portions of the smashed clams would be released. This would last for a longer period of time than the chum-bomb, but still only give me around a 5-minute dispersion time at most—and boy was it a messy practice!

Fast forward a few years to the inception of the Chum King, a yellow plastic chunking/chum pot that sank in the water column and with a quick pull of the rope attached to the top, opened the pot and released the contents, be it clam, bunker chunks, or even live baitfish.  The unique design allowed chum to be deployed lower in the water column and more directly under the transom, without the mess associated with the burlap bag. A brilliant invention, that when weighted with several additional 16-ounce sinkers, got down to the bottom quick enough and  certainly helped spark many bass bites over the years. It created a massive one-time cloud of attraction, similar to the aforementioned “chum bomb” but at a more effective depth. Once the contents were released, it had to be pulled up and reloaded each time before future deployment.

The most recent evolution to deep-chunking methods has been made by Captain Slaughter Tackle with the introduction of the CST Pro 100. This is the deep-drop chunk pot that comes aboard for every bass trip I make nowadays. The CST adds on to everything the Chum King did but is made out of solid metal construction, sinks like a rock, and is spring-loaded to open and close with every yank of the rope. Using this chum pot, you can precisely disperse the amount of chunks sent out in the current in steady intervals without having to pull it up and reload it each time. I have loaded it with bunker chunks, clam fragments, even live bunker to stimulate bass to feed more aggressively. This is the most effective method of deep-dropping chunks I’ve found so far.

Of course, these methods and devices work equally well on the offshore grounds for chunking tuna or yellowfin, I can’t see why smashing up a bunch of crabs and sending a chum pot down on your favorite blackfish drop wouldn’t help coax a wary whitechin out of its craggy lair too.

The popular real estate term used to justify jacked-up house prices – location, location, location – reigns just as true on the chunking grounds. You’d be asking a lot out of a simple chum pot if you anchored up a mile away from the closest striped bass. Modern-day GPS fishing chips featuring updated topographical software by the likes of Navionics, Garmin, C-Map, and Humminbird, can really help narrow down your search area by showing you prime real estate. And depending on the particular neighborhood you’re fishing, the best home choice for trophy stripers usually comes in the form of a rock pile, reef, wreck, channel edge, pilings, undulating bottom contour, or other forms of underwater obstructions.

Many of these structures are displayed on current print charts, but they’re much easier to find on updated card charts.  By running your boat in a search pattern back and forth over a piece of structure using your GPS, while at the same time scanning the bottom with your fishfinder, you will be able to see if the structure is actually still there and not broken apart or sanded over by storms, and then save the exact location of the structure once visible on your fishfinder.

An active storm season can dramatically displace bottom structure, so the start of every year should be to reconfirm your favorite bottom pieces with sonar confirmation. The GPS map on my Humminbird Helix 9 SI for example is a living document; a matrix of waypoints, tweaked from season to season; but at the beginning of every season and preferably not on the day I plan on fishing that particular piece of structure. On the day I plan to fish the structure, I don’t even want to run my engine over the piece, but rather take a wind/tide drift check in the area and drop anchor well up current of the mark.  Those marks you fish effectively this fall, be sure to scout them out fully next spring in a little pre-fishing recon effort to see if the structure has changed at all due to winter storms.

Once firmly on the hook, I pay out anchor line until I’m within 50 feet of the structure when striper fishing.  When cinched up ahead of the structure, I drop the bait-loaded deep chunker to the bottom to release periodic waves of chum and chunks. One other tremendous new structure-finding tool available on the electronics market today is side scan imaging; on my Humminbird unit I can scan the bottom 240 feet to the left and 240 feet to the right looking for structure, both old and new. This provides an amazing technological advantage over traditional conic transducer images for locating structure.

Add a little spice to life the next time you set up to chunk/chum stripers by going deep with your slick and keep the bass feeding behind your transom!